I recently decided that I need to work small.  (This decision is in no part affected by the fact that I cannot find any storage room for these giant projects I keep making in my basement.  Yeah, right!) 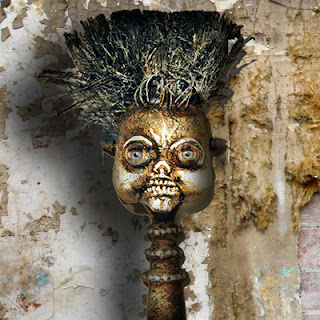 My mentor artist teacher (ie:  the guy I steal most of my ideas from) Michael de Meng teaches a workshop on making figures from paint brushes called Brushes Gone Bad which I have never taken.  However, I own one of Michael's Brushes Gone Bad creations and in looking at it everyday I decided that would be the model for my next work. (For the sake of full disclosure, the piece shown above by Michael is NOT the piece I own.  The one I own is better). 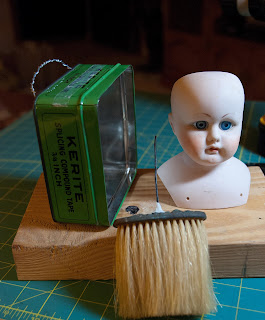 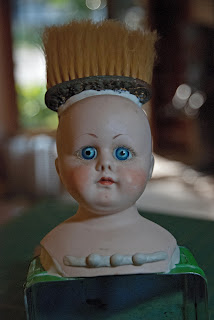 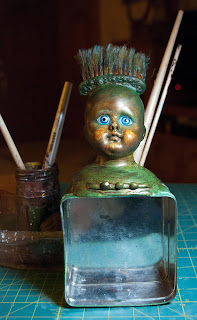 The box was so cool but once I Apoxie clayed the head to the box the hair meant I could not longer hang this on the wall so that it looked nice.  That made me think that maybe I could find something to put behind the green tin box. 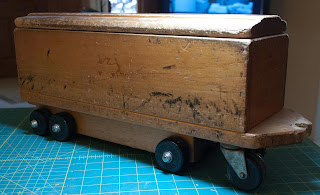 Sooooo...out came the kid's pull toy I bought a few years ago at a school rummage sale.  Believe it or not, this was one of four or five that I bought for fifty cents each because the folks at the rummage sale thought these had no value without the missing wooden engine.  I could not disagree more. 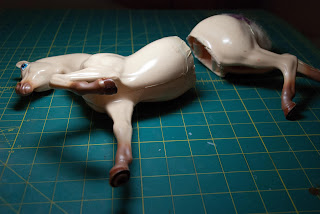 Once the tin was on the front of the wagon it became obvious that I needed something special to be in the tin box like maybe a heart.  Sooooo.....this is about when the idea of making a circus wagon occurred to me and I went looking for a horse.  I think this may be one of those Pretty Pony toys or at least it is something very similar.  I had to hack off his butt in order to have him placed correctly on the wagon and that was accomplished with a Dremel.

With more Apoxie Clay I clayed his butt to the box but the real challenge came when I needed to have him sit for a few hours to harden.  I work in my living room/den on all these projects using my basement studio only for drilling, sawing and anything exceptionally stinky.  So, the den corner near the music collection became my vise. 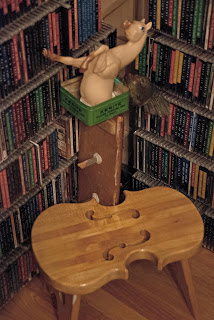 The top of the circus wagon was a separate piece but that ended when the tin box needed to be drilled into both it and the body of the wagon in order to stay in place.  I decided that I wanted some kind of power/electrical/motor thing on top of the wagon so in searching my found objects (ie: junk) I found an old lamp part and some wooded findings that I thought might work. 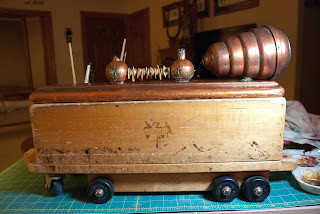 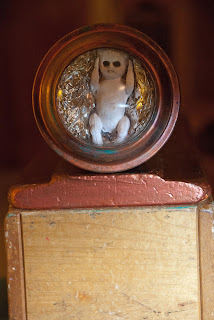 The lamp had this cool space so I filled it with this little guy who appears not to be having a great time at the circus.  Some of you younger folks might think this is a Stephen King influenced attachment but I would encourage you to read Something This Way Comes by Ray Bradbury.

Our lead horse needed to be integrated into the piece so I decided to add these old wood insulators as casters.  They turned out pretty cool especially once I gave them a little circus wagon wheels colors for texture. 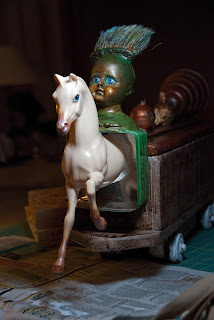 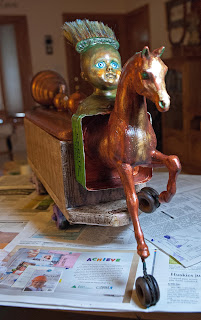 When I looked at the wagon at this stage, I decided to echo the front with a box on the back.  Of course, the rear end of the horse had to go here to complete the symmetry so out came the Apoxie Clay again. 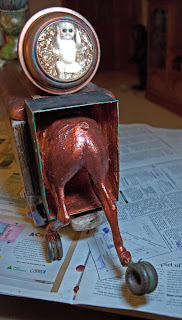 The sides of the wagon were circus poster images printed onto lutradur to give it that dreamy worn quality I was looking for in the whole piece.  The nails, wire and erector set pieces on the top were an artistic decision made when something seemed to be missing. 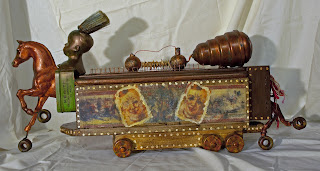 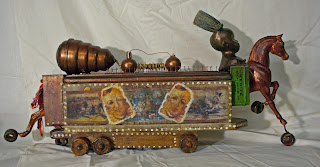 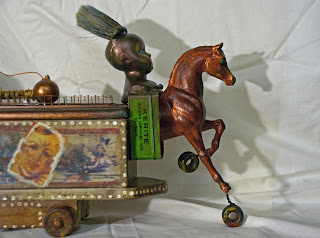 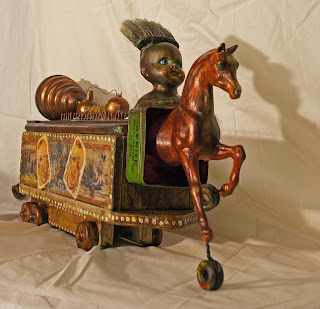 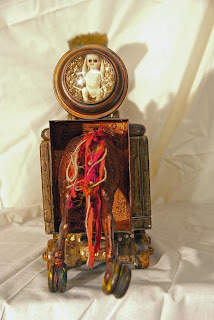 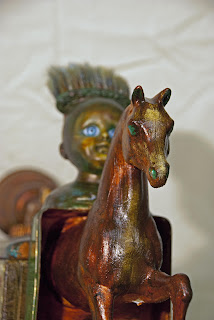 Sooooo...what started out to be a paint brush turned into this piece which I have been calling Circus Wagon.  It is 32" x 6" x16" and weighs in at 13 pounds.  There are $31 worth of junk attached and it took 25 and 1/2 hours to construct and paint.

After talking to you (and thanks for listening) I have found a name for this piece:  Something Wicked This Way Comes.  Ray Bradbury passed away recently and I am glad to say that his writing has influenced my reading tastes for my whole life and I am glad I could do a tribute in his memory.

Posted by gary warren niebuhr at 9:26 AM