Make What Ya Brung #2 at Valley Ridge Art Studio 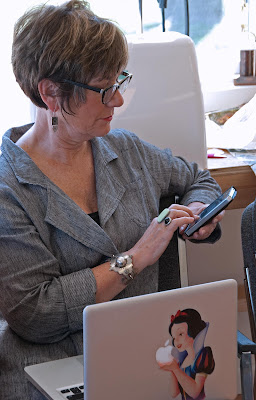 Each princess to her own Evil

Since Katherine Engen, its proprietress, decided not to sponsor workshops but allow artists (and normal people like me) to set up their own thing, I have been working with my art buddy Kelley Clark to host playdates we call Make What Ya Brung.

From April 26th to the 28th, Kelley and I hosted the second playdate.  We started with a trip to Cuba City, WI, which is home to two antique stores we like to haunt.  My wife Denice came along and we were also joined by Kelley, Lynn Ovenden, Cindy Stamp and Carolyn Abramofsky.  I cannot speak for the others but I dropped $80+ bucks in one store and $35 at the other.  Then we all lunched at one of the local spots and our extra excursion was complete.

Driving to Valley Ridge from Cuba City got us there around 3 p.m. for set up.  Valley Ridge Art Studio consists of Katherine's home (which also has sleeping rooms for two guests), the farmhouse (where four rooms are available for rent), the studio and the community room for meals.  Our job was to set up the tables in the studio for the weekend. 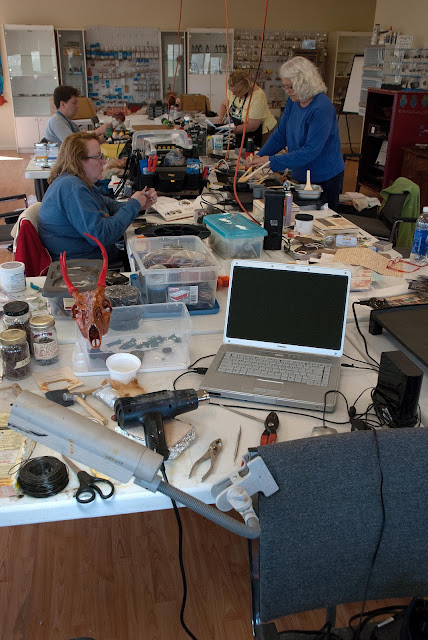 Eventually on Friday we were joined by Cris Smith, Jenny Gringer Richards and Tom Goodman.  Some of us set up, some of us had time to start projects, but all of us went to Castle Rock to eat the Friday Night Fish Fry.  Castle Rock is a very rural, very local establishment with an interesting buffet.  It is always fun to watch the faces of folks who have never eaten there as they try to take in the atmosphere and all the fried foods and deviled eggs.

With this being a play date, folks can work in the studio as long as they want.  At night's end, it was Cris and I who turned off the lights at midnight.

While in Cuba City, I had noticed a poster for Crazy Frank's Flea Market in Mineral Point which was going to take place on Saturday and Sunday.  If you have not been able to tell right now, junkin' is at the heart of all we do so off we went at 7:30 a.m. to Mineral Point.  While the poster said there was 150 dealers, we found about a dozen (and I still managed to buy a ton of stuff).  The real payoff is the Crazy Frank has his own indoor dealers that are available any day and today we attached the inside stores with relish.  Another $50 worth of stuff went into the van.

When we got back we found Carol Shufro had arrived but no Coolie.  Despite Friday being her birthday, Coolie's car had broken down and she was not able to arrive until midday--but to much applause for having the strength to keep going forward instead of going home.

Lunch each day was an option but the food was provided by Joe from The Cook's Room.  This is gourmet food served in the community room with a view to die for.

Saturday night is our traditional bowling tournament at Tower Junction but the real reason we are there is to eat the pizza.  I bowled a barely 100 game and then ripped off a 140ish game.  Go figure.

By 5 p.m. on Sunday, it was all over.  There is a bittersweet quality to all things Valley Ridgeish this year as the place is going up for sale.  Hopefully, Kelley and I will be able to hold one more Make What Ya Brung this fall so we do not have to say this was the last.

Here are the pieces that I made.

This first piece is called Death is Death.  It is from a James Russel Lowell quote I used on the piece that reads:

Console if you will, I can bear it;
'Tis a well-meant alms of breath,
But not all the preaching since Adam
Has made Death other than Death.

The base is a piece of iron brought to Valley Ridge by Jean from Life of Riley, a local bed and breakfast (Jean also brought many bones and skulls, many of which I claim for my stash).  I painted the iron piece, added a tin type photograph and a rosary icon.  Then I added a backdrop page from an old German bible some of us  had bought at Make What Ya Brung #1.  When I got home, I added the last piece--another backdrop of hand made sabai paper. 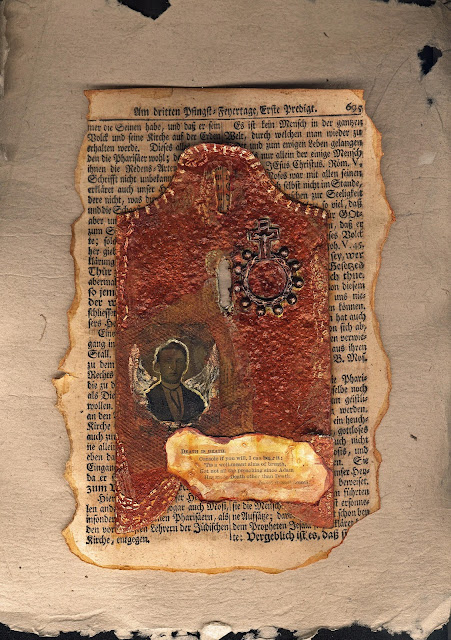 The second piece started as a plain little box.  The reason I worked with it was because I wanted to practice the technique of layering on materials and then setting the box on fire.  My materials this time were gesso, acrylic paint, shellac and Kroma Crackle.  The interior was completed with a tin type and a rosary icon.  The quote I found for the box was "My yoke is easy and my burden is light" (which is also the title) from Matthew XI, verse 30.  On the cover I added a religious pin. 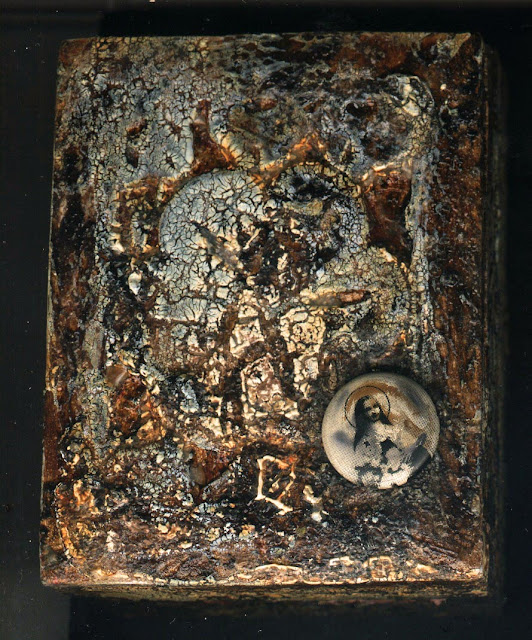 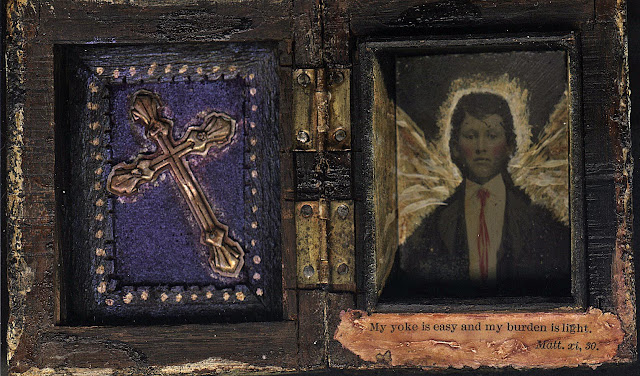 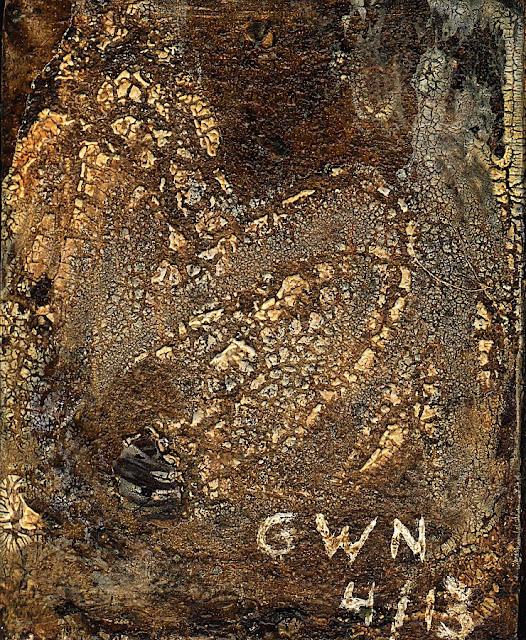 The third piece is my doll head on a stick routine.  I like making these forms and have done about a half dozen of them.  This one started out as some old farm tool that might have been a pick or axe.  The small clothes brush was a great find because I knew when I bought it that the colors in it were inspiring without any additions needed.  The arm like extension is part of an old lawn sprinkler with some candle holders stuck on.  Some Apoxie Clay added the features to the doll head and then it was just a matter of painting it up. 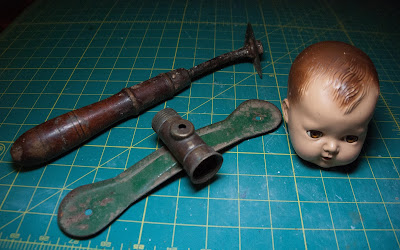 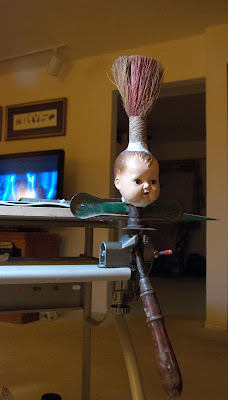 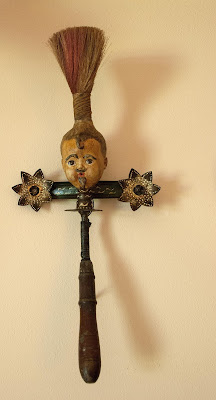 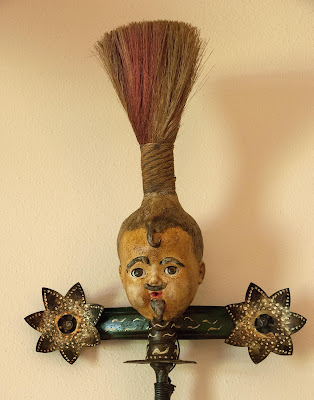 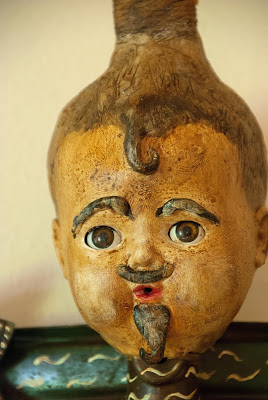 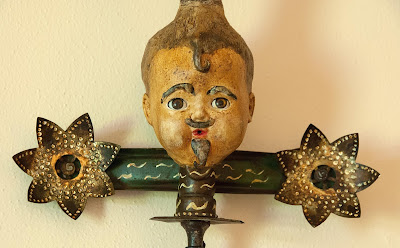 I call this one Young Colonel Sander's Mohawk. 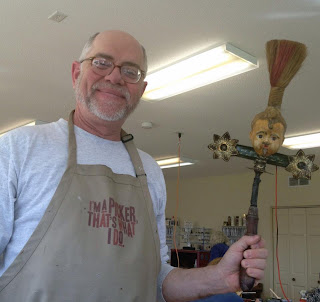 Me and the Colonel (photo by Katherine)


The last piece was the challenge for the weekend.  Here was a second piece that began its life on my worktable at home.

I bought the wooded carved head at some flea market or estate sale. 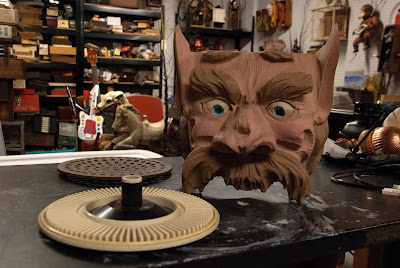 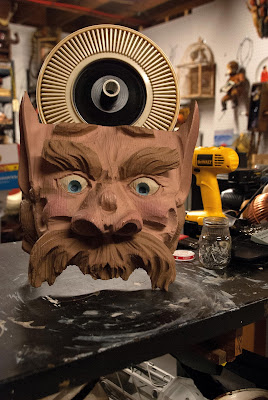 To give it dimension, I added the old slide carousel to the back of its head.  A plastic butterfly decorative piece got split to create the wings. 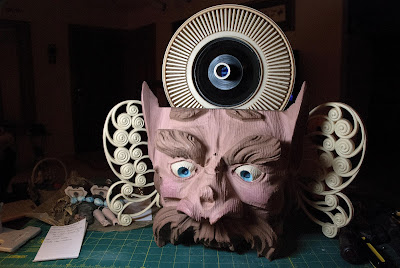 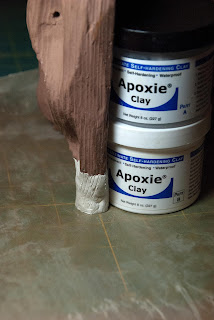 One of my favorite go-to supplies is Aves Apoxie Clay.  Here I had to use it to create a false leg so the wooden head would sit balanced on a table.

Then it got painted.  I have to say that in my old age, on these big pieces, I am doing the initial coat of white from a spray can rather than with a brush and some gesso.  The jury is still out about how this helps the second coat of paint but that spray can sure cuts down on the time it takes to cover the nooks and crannies of a piece like this. 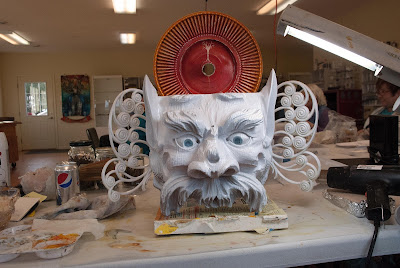 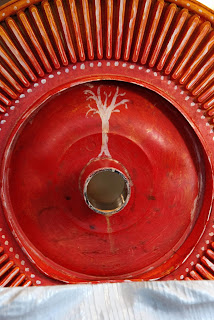 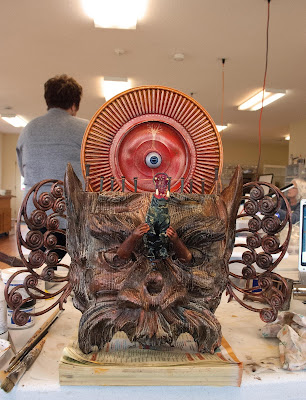 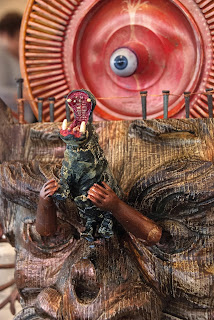 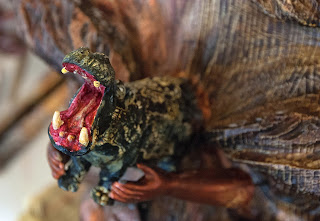 After painting I had to add all the adornments and it was done. 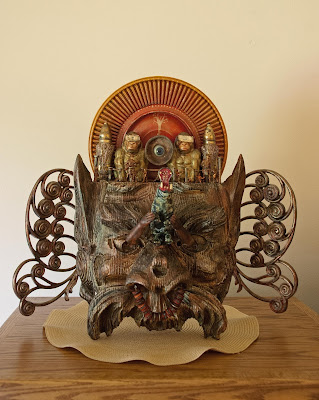 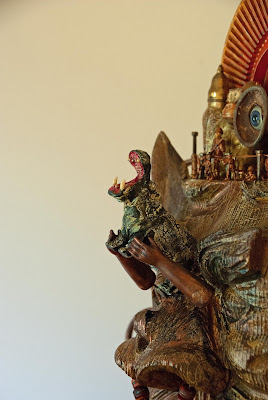 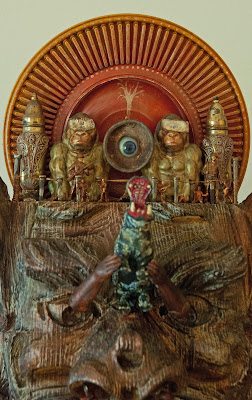 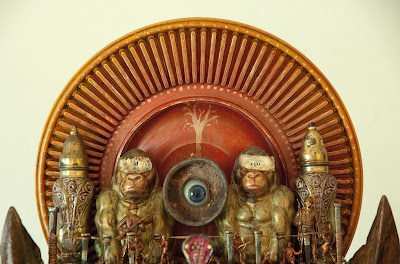 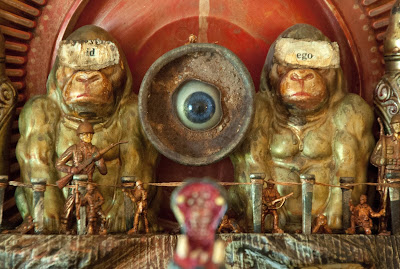 The title of this piece is Damage to the Hippo Campus Leads to Anterograde Amnesia Wherein the Distant Past is Remembered But No New Memories are Formed.

There will be one more Make What Ya Brung at Valley Ridge this November.  I welcome you on behalf of Katherine Engen and Kelley Clarke.  Visit the Valley Ridge site to discover the details.