I was pleasantly surprised to find that after being invited to have some photos and mixed media frames in the Dia de Los Muertos at the Walker's Point Center for the Arts, I was invited again to submit some similar works for the brand new Gift Shop which was going to opening on Friday, December 6th, the night of the COPA show opening.

Mary Overman, the very kind Membership/Exhibitions Coordinator at the Center, has been guiding me through the process.  She selected a number of photos from my Flickr page and it was up to me to figure out which to frame.  Because the Oaxaca photos sold so fast, we decided to do another round from the trip.


The first three frames started as bare wood.  I decided that for the first one I would collage pages from a Spanish to English dictionary with classical sheet music. 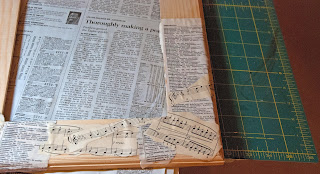 After the collage was done, I painted the piece while being careful to select certain words and highlight them with paint. 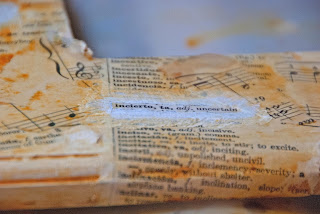 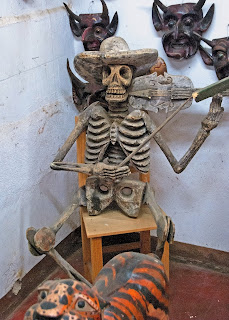 This image from a shop in Oaxaca was the image I wanted to use with this motif.  I found a music holder in my stash and added that, with its own sheet music, onto the front of the frame.  One of the highlighted words on the frame was "barbulla" which means clamor and that became the name of this piece. 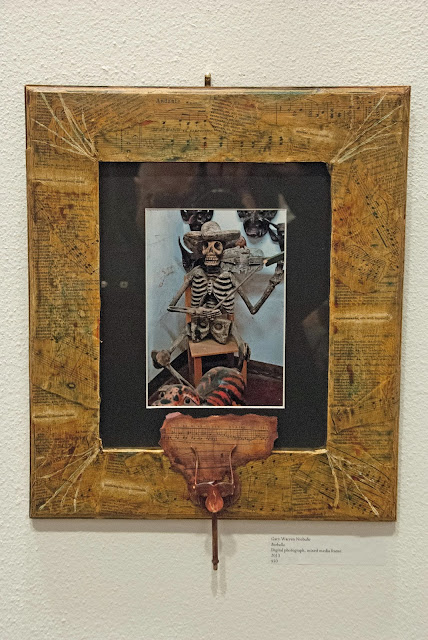 The second wood frame was adorned with three tin candle holders made in a Mexican style. 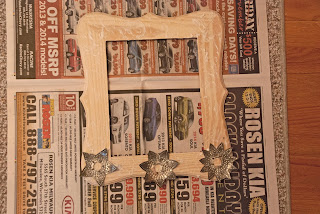 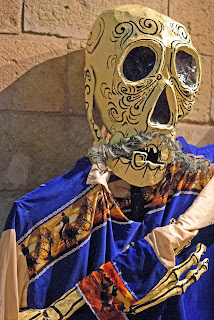 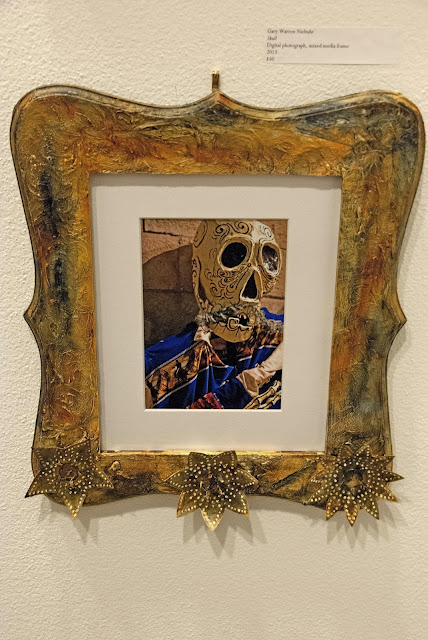 This pieces is called "Skull."

The last wooden frame was destined to become the home of my favorite photo from the Oaxaca trip.  The first addition was a Dodge car key to the front which I wanted to use because of the classic star imprinted on the key. 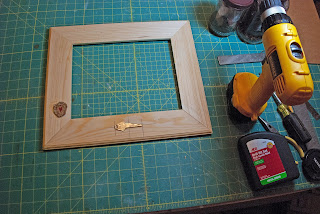 The additional of the crown of nails really opened up the work. I painted this one up with a rusty color in mind. 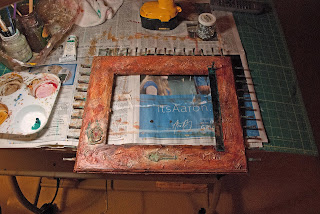 The bottle cap was painted while I was in Oaxaca and I added it to the frame. 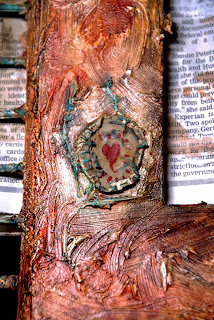 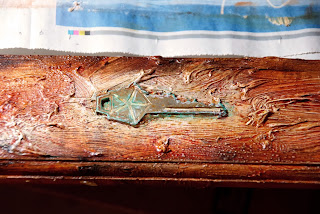 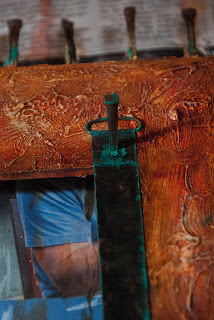 The final attachment was a metal strap.  Below is the image that I love so much. 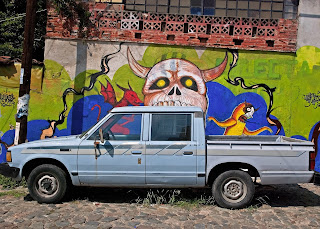 The title of this piece is "Chomp."  It sold before the gift shop opened which is not only pretty cool but rather magical sounding, eh? 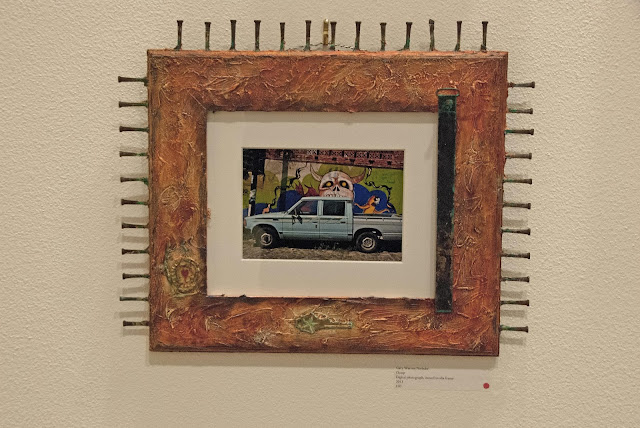 The last frame was one that had just come home from the Fond du Lac Public Library exhibition called "It's a Dog's Life."  I added one element to it:  a dog tag with the words "El Fido" which also becomes the new name of this work. 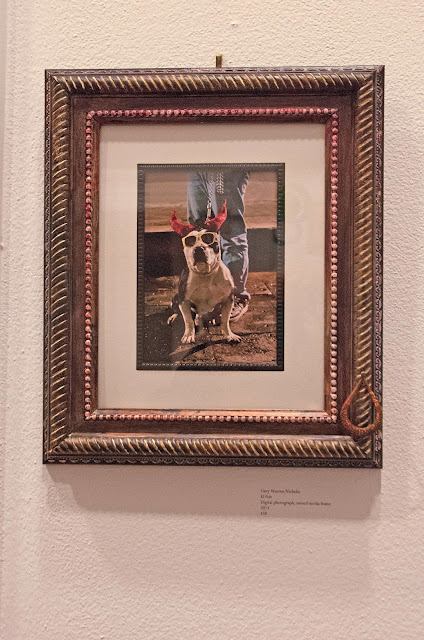 I decided that one of these pieces was going to be painted in the alebrije style of the Zapotecan figure carvers.  As it turned out, the frame I selected has a series of dots imprinted into the structure that lends itself to the Mexican style.  However, an odd thing happened when I started.  I did one round of white dots and like it so much that I stopped right there. 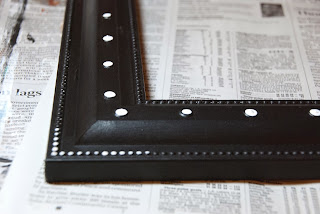 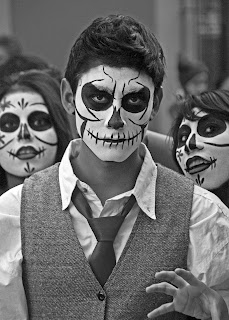 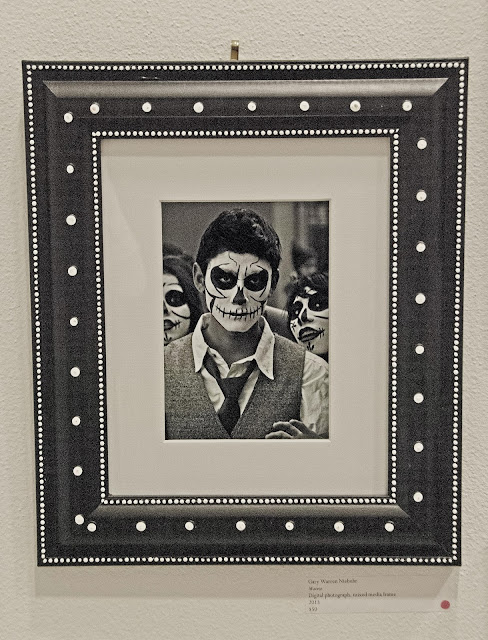 It must have worked because "Muerto," as this one is called sold before the gift shop opened as well.

So, three of the pieces are still in the gift shop if you are interested.  I am going to be adding different pieces as time goes along so stop in at Walker's Point Center for the Arts to see all their exhibitions and don't forget to stop in the gift shop.