Fling Out the Radiant Hem, The Holy Ghost is Here Pleading Company

I know an artist named Jessie McNally who I had the opportunity to watch create a piece on my first Michael de Meng excursion to Oaxaca, Mexico. 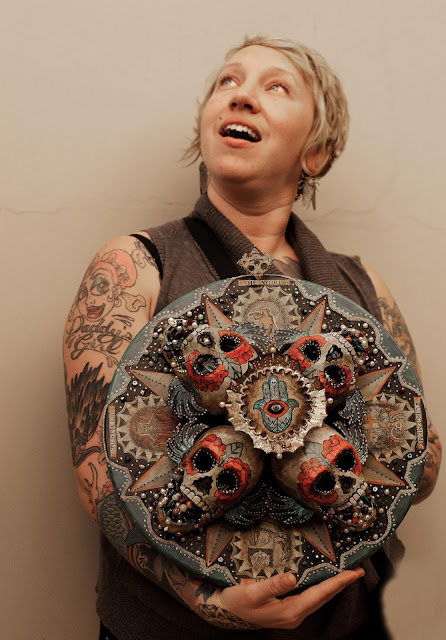 Jessie in Oaxaca with the art she created

Jessie is very, very talented and has a cool way of transforming everything she touches into a work of Dia de Lost Muertos art.  I decided that this piece was going to start with art inspired by Jessie's work.  So when I found this statue from the Da Vinci Collection 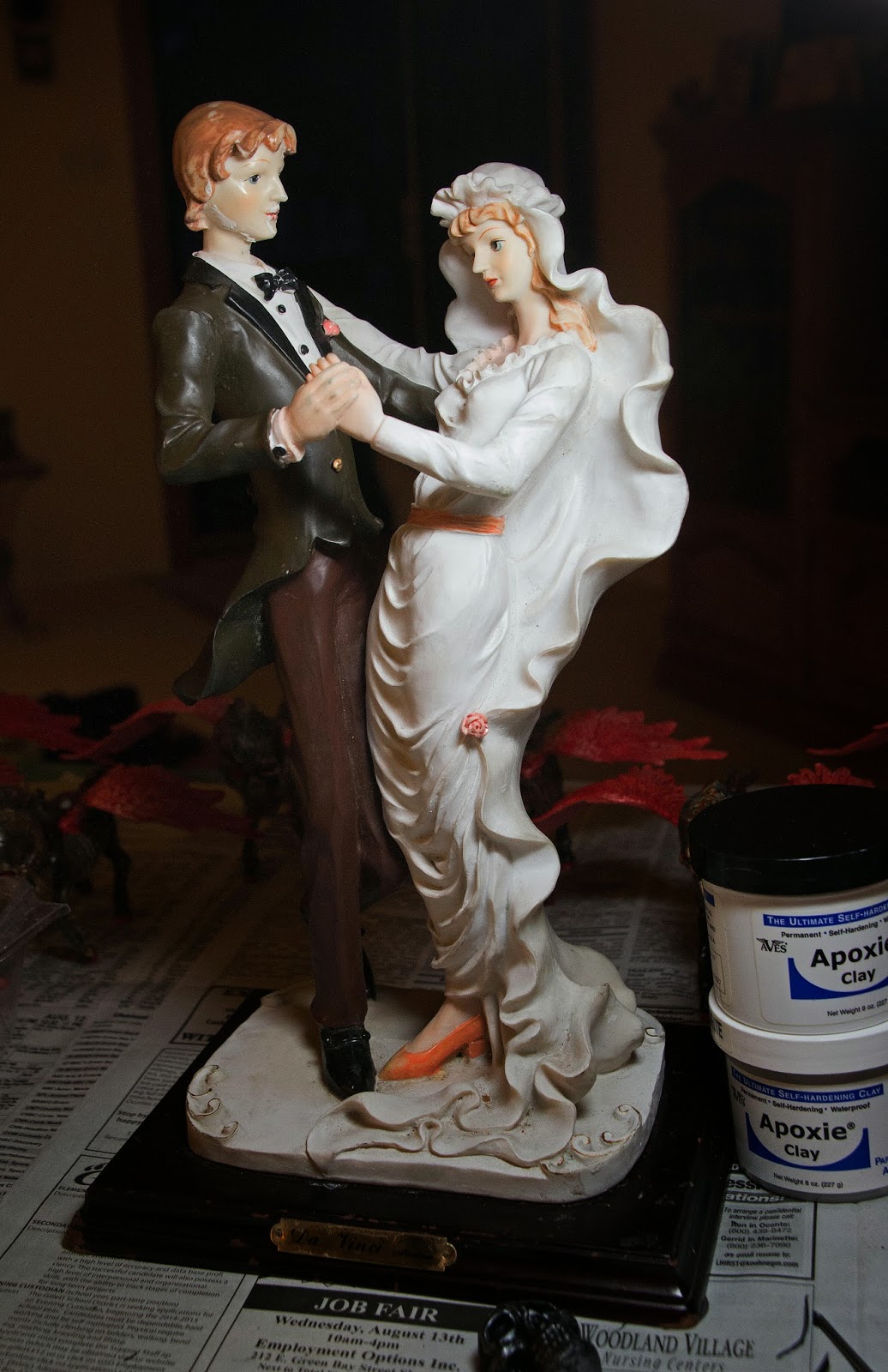 I decided this bridal couple would be transformed into my Dia effort.  That means skulls, baby! 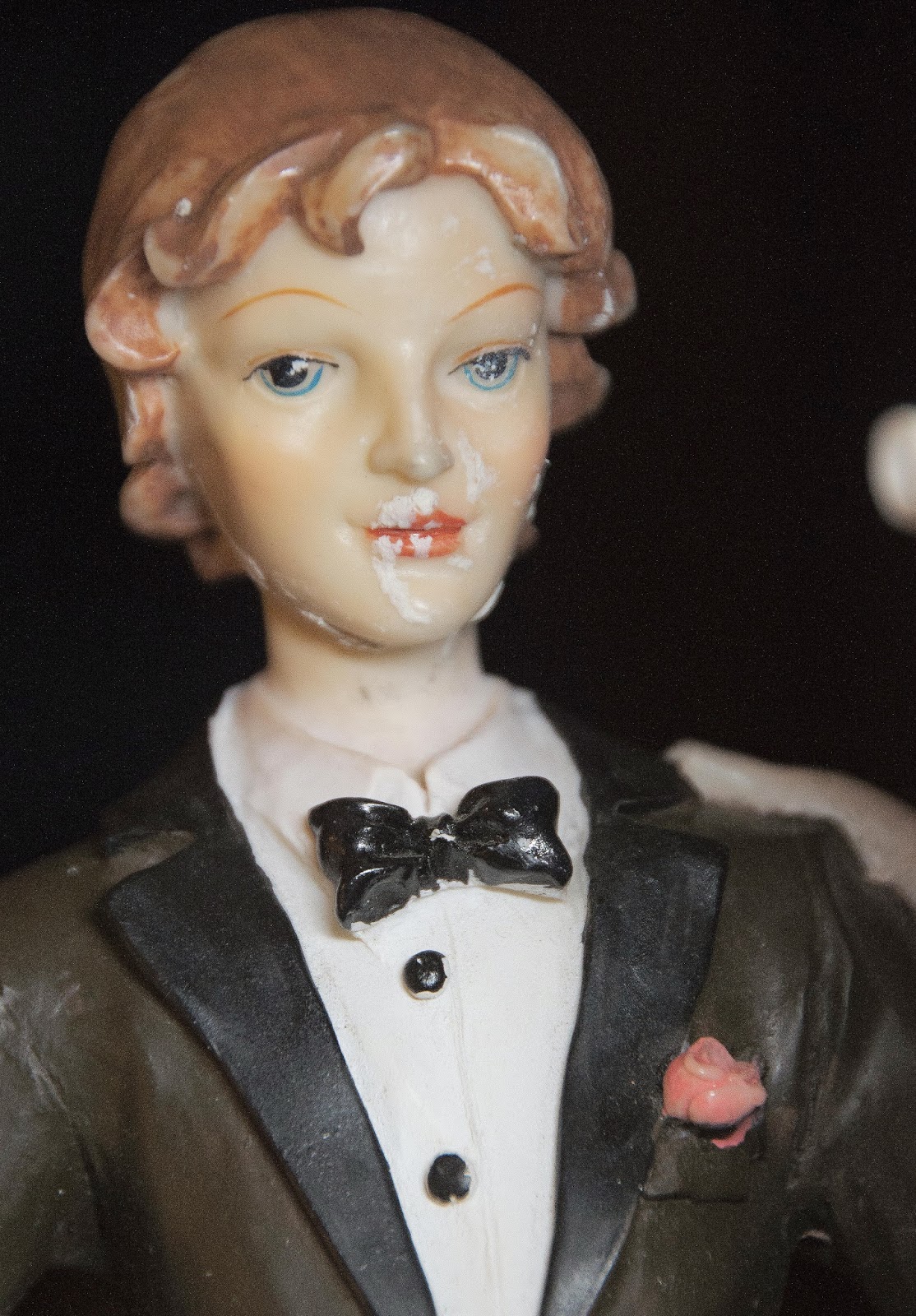 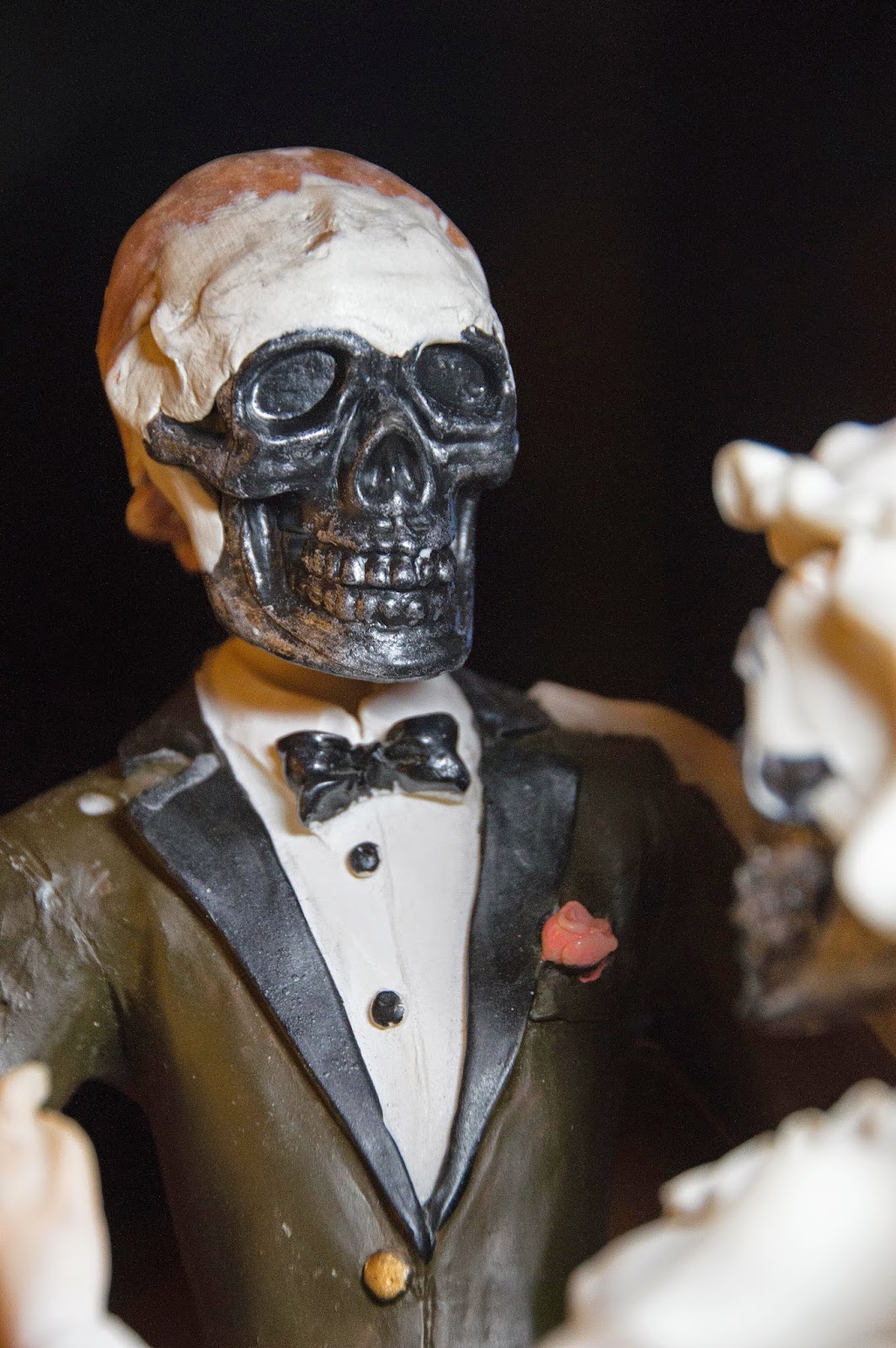 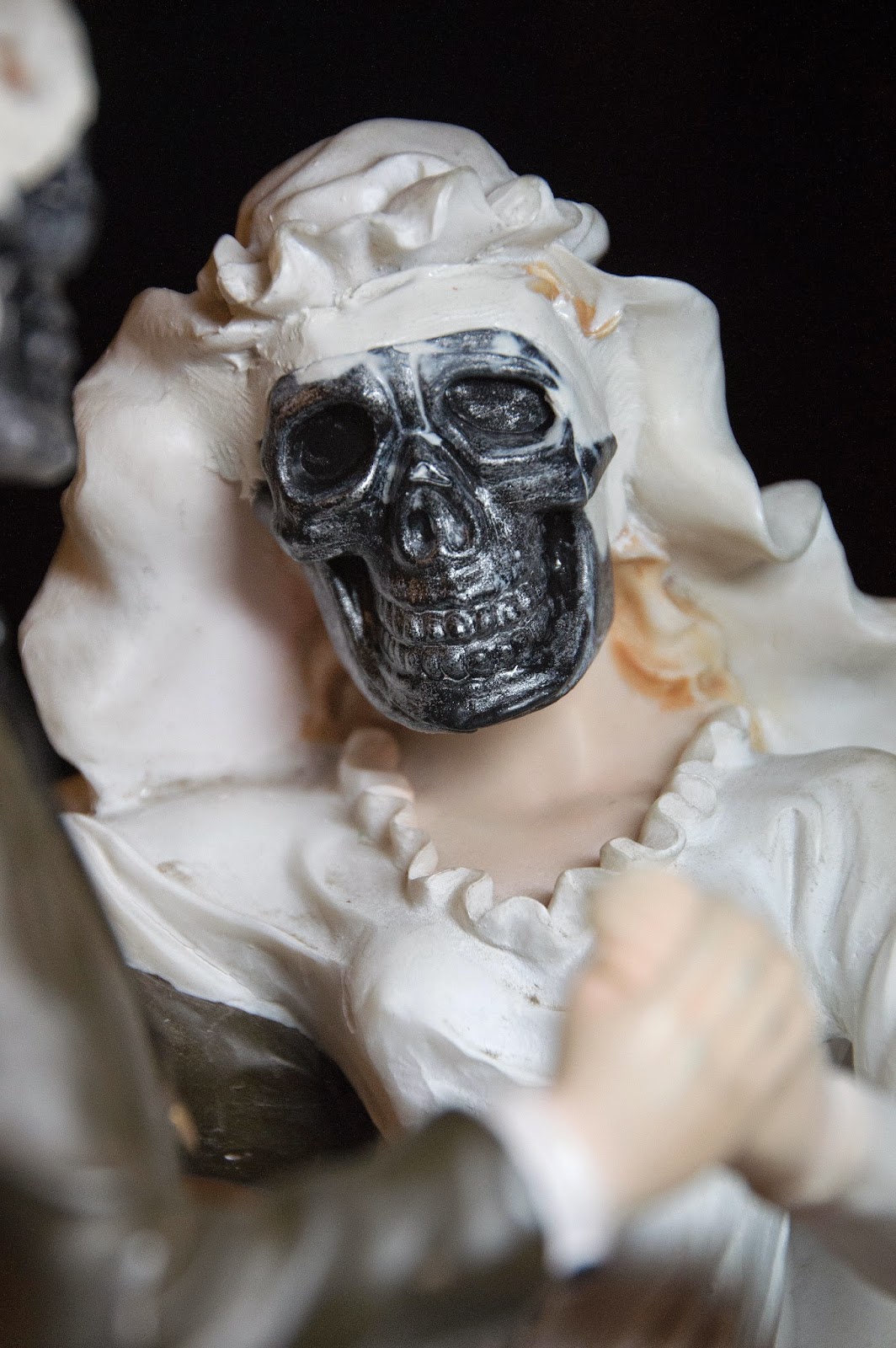 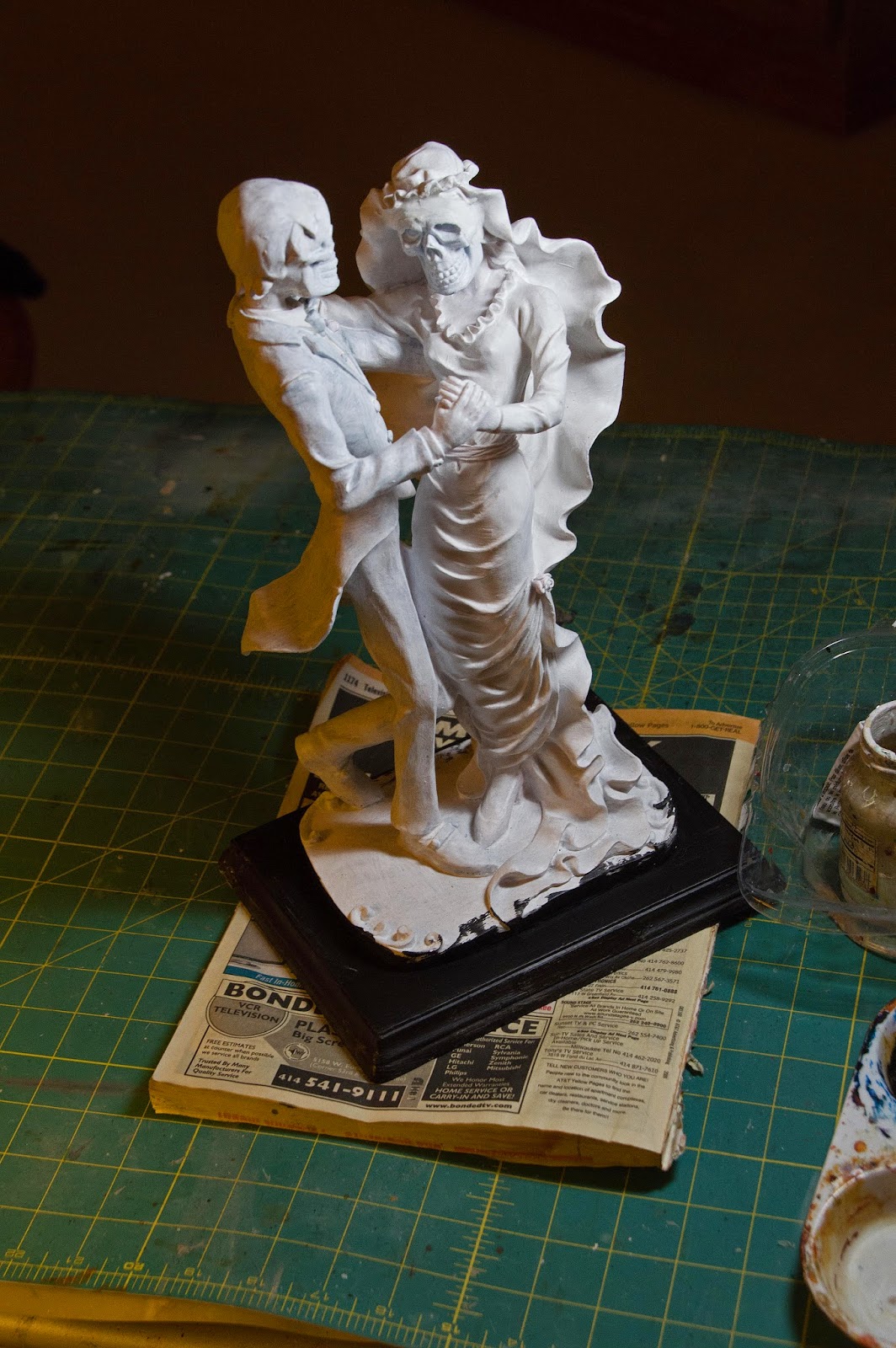 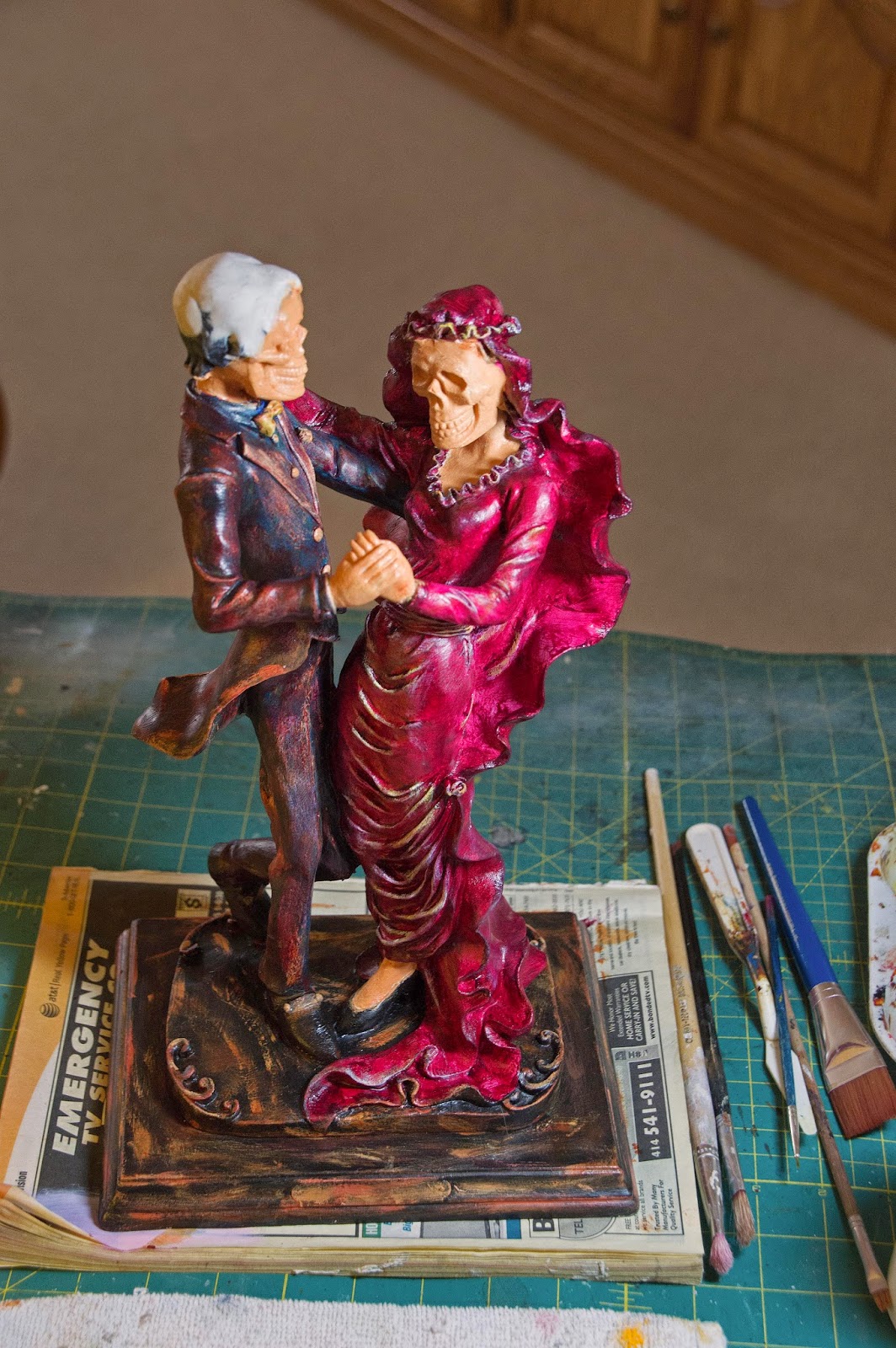 After the painting got going, I came to the decision that I wanted a circular motion behind my dancing couple as well.  I searched through my stash and discovered this cool plastic round frame. 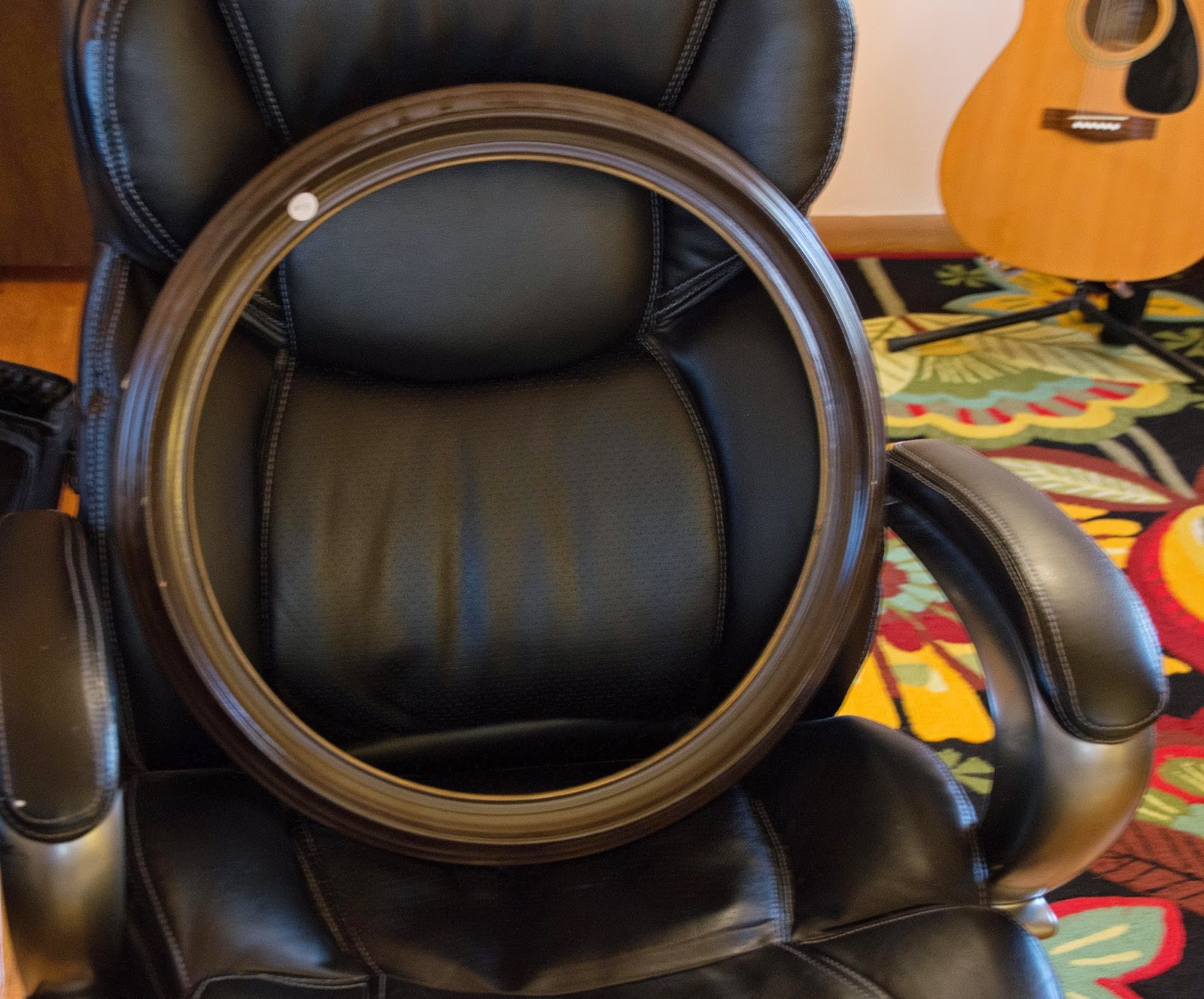 In addition, I decided I wanted something behind them and settled on a metal bread basket I had. 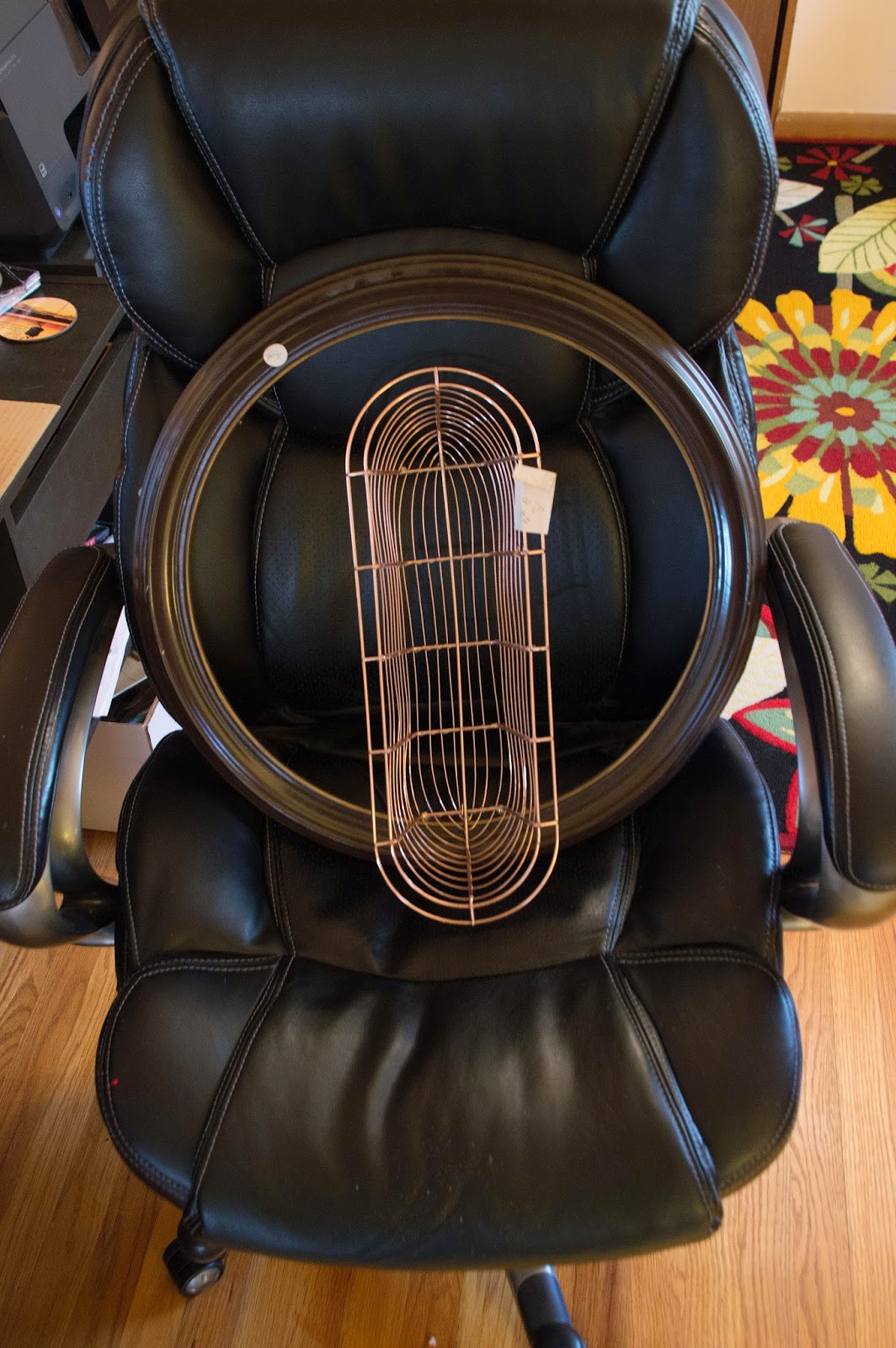 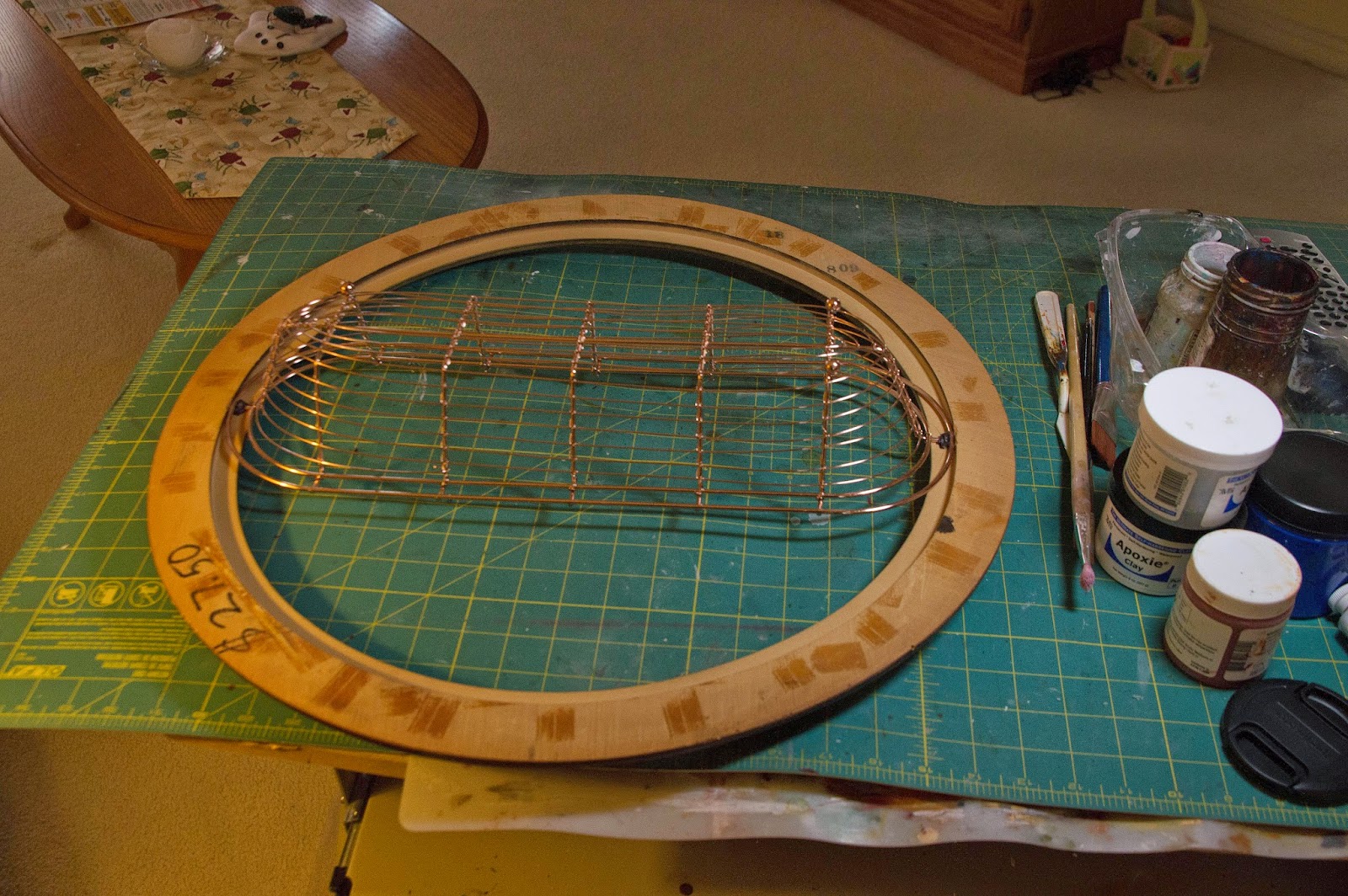 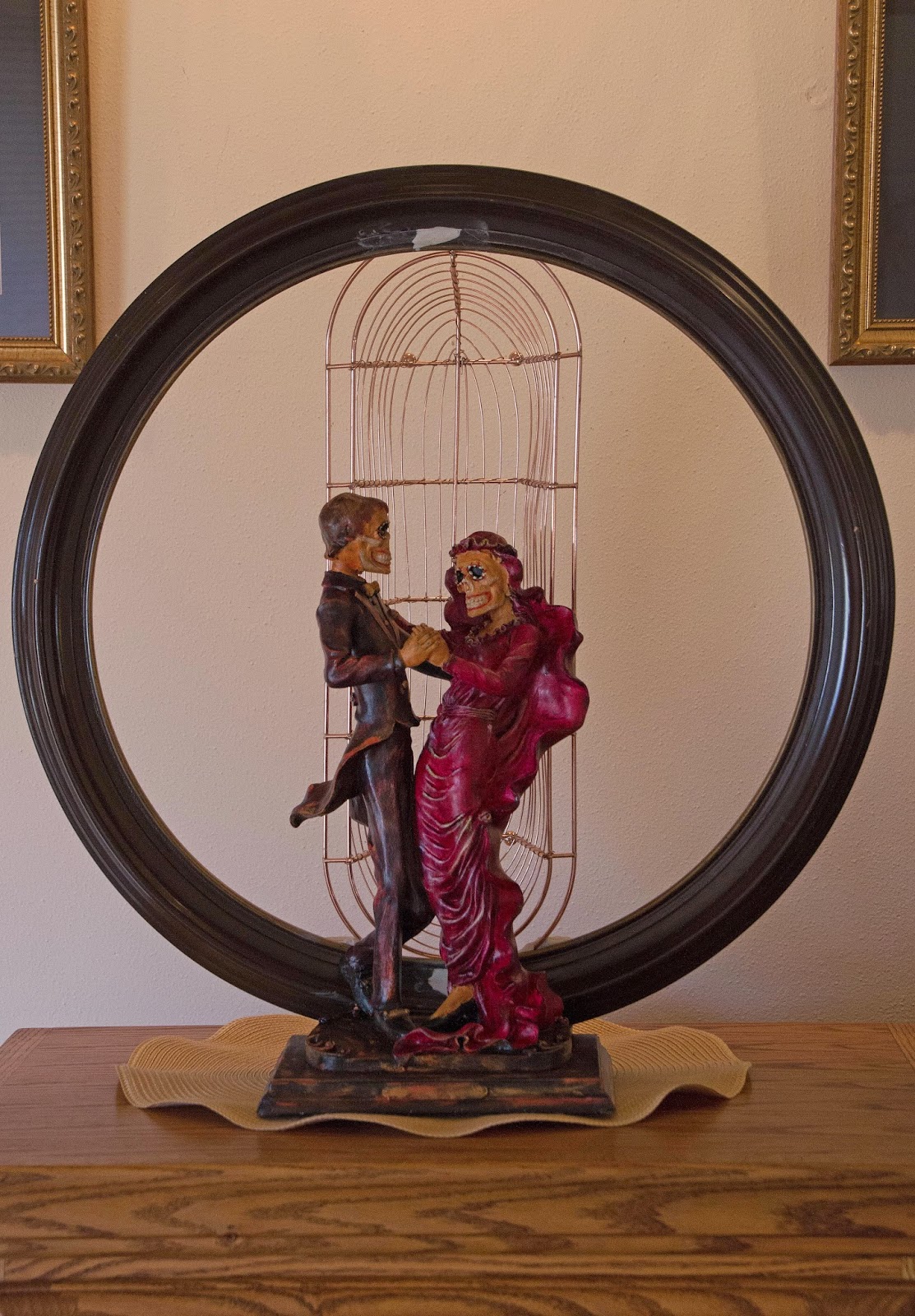 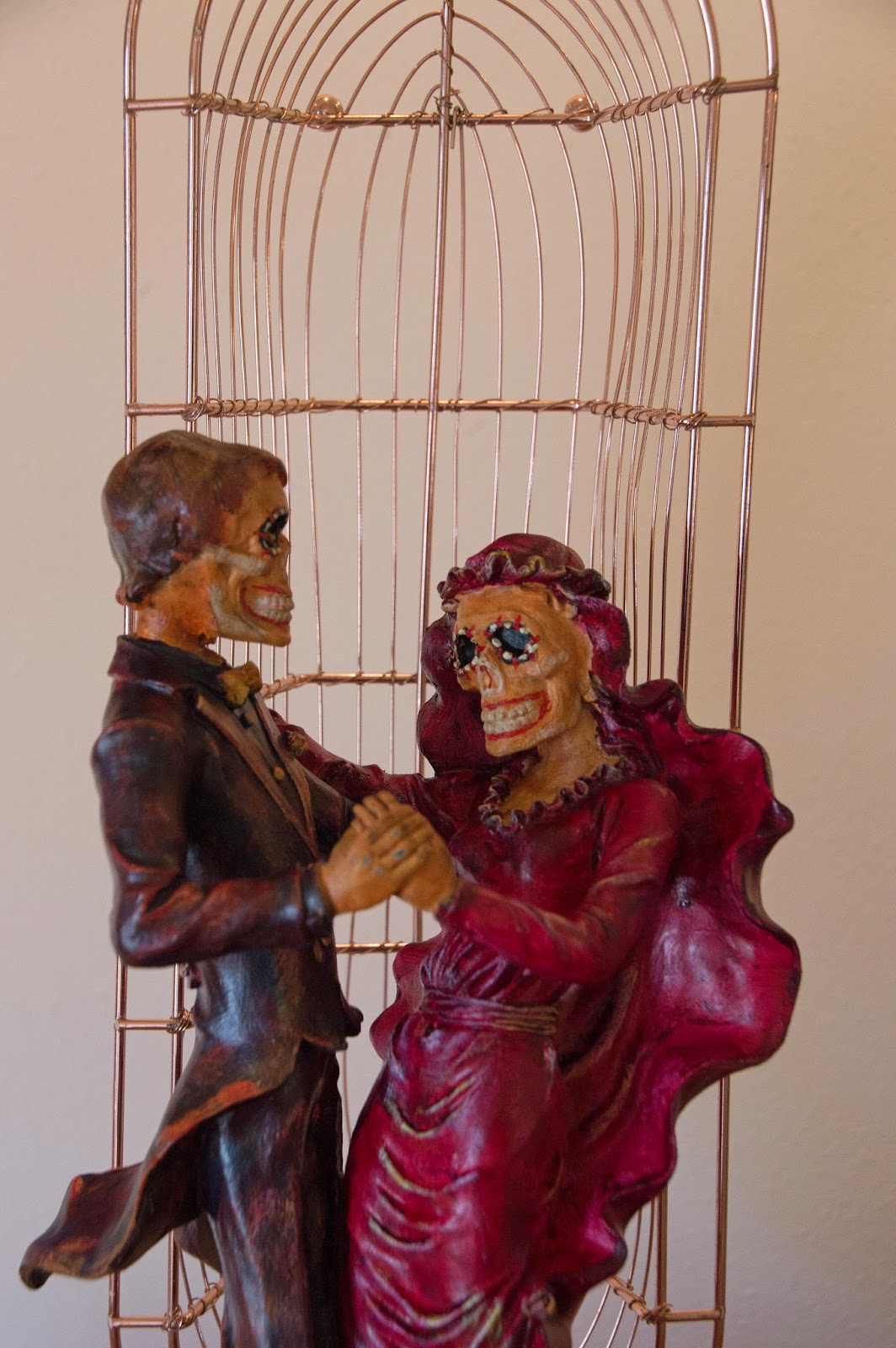 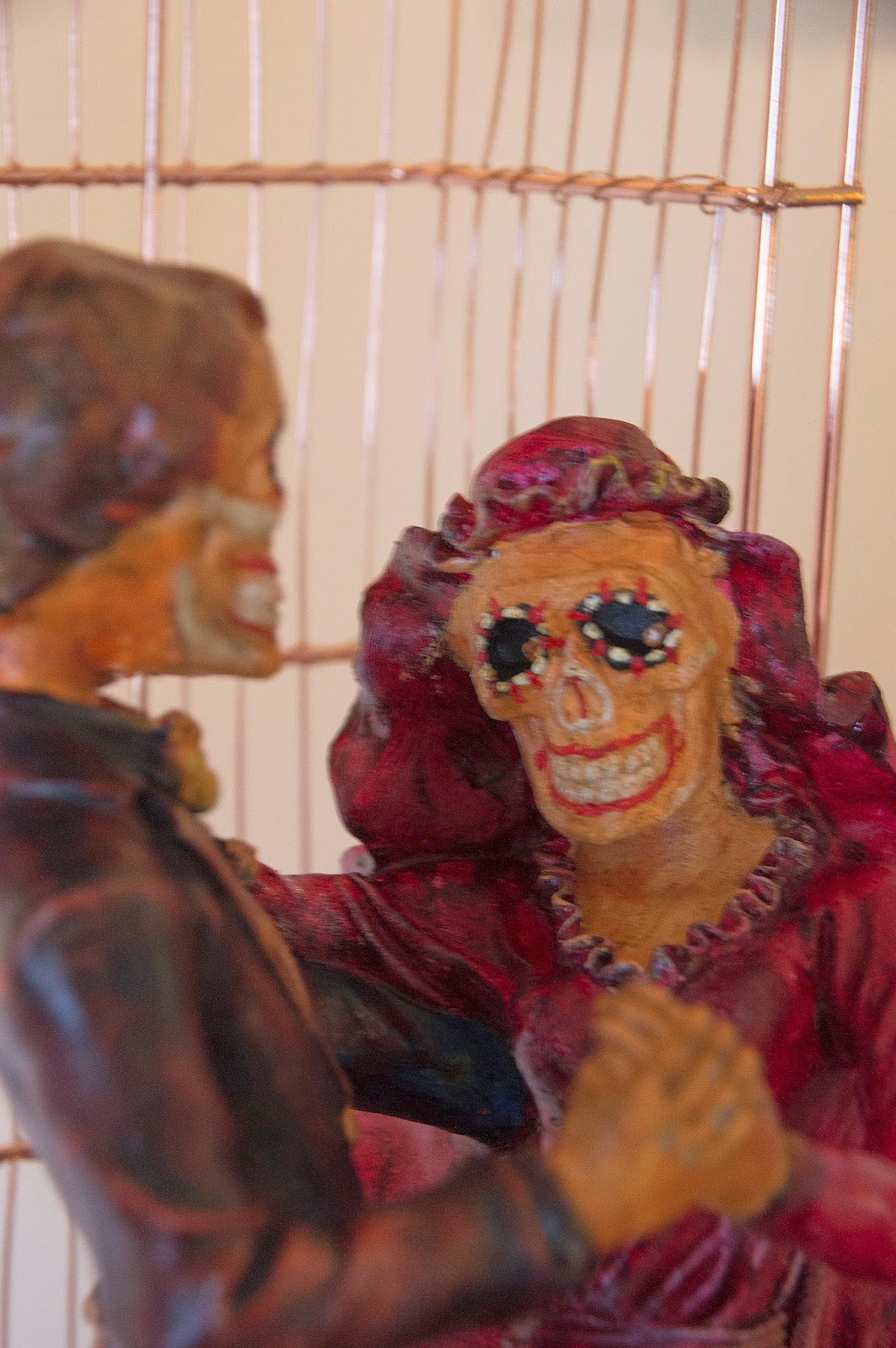 Attaching the bread basket to the frame went well.  So did attaching the round frame to the base of the dancing couple.   When I held the project up, it began to remind me of some of the churches I had seen in Oaxaca. 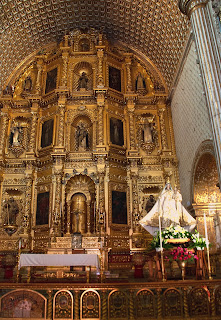 Once I could see how it was going to work structurally, I thought I needed to add some side panels and went digging through my stash for some cloth.  I stumbled upon these two old bank deposit bags and it was game on.  Some dress pattern paper and some paint made them more interesting.  Then I collage on a layer of pages from a hymnal and I had more of my theme. 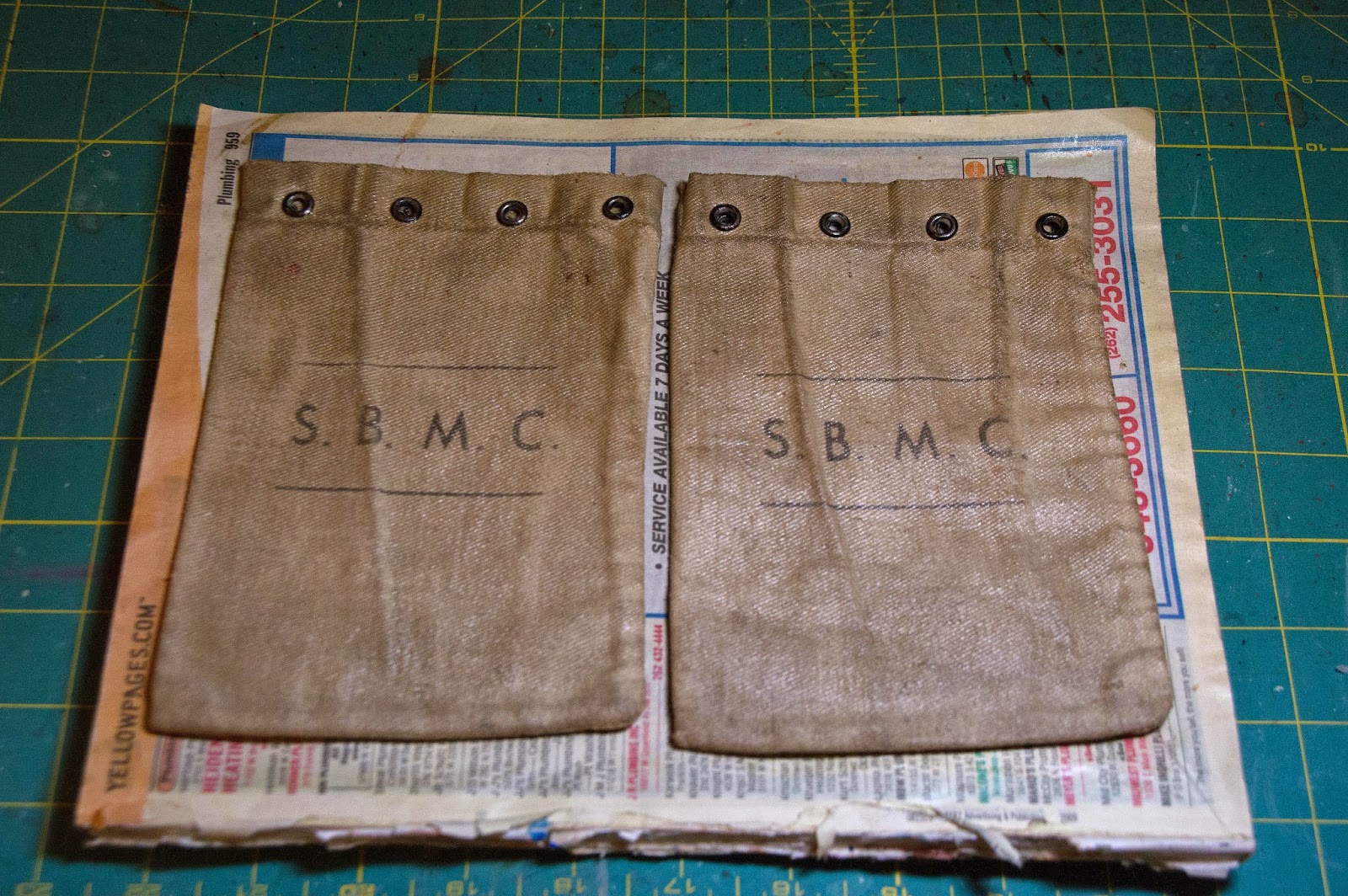 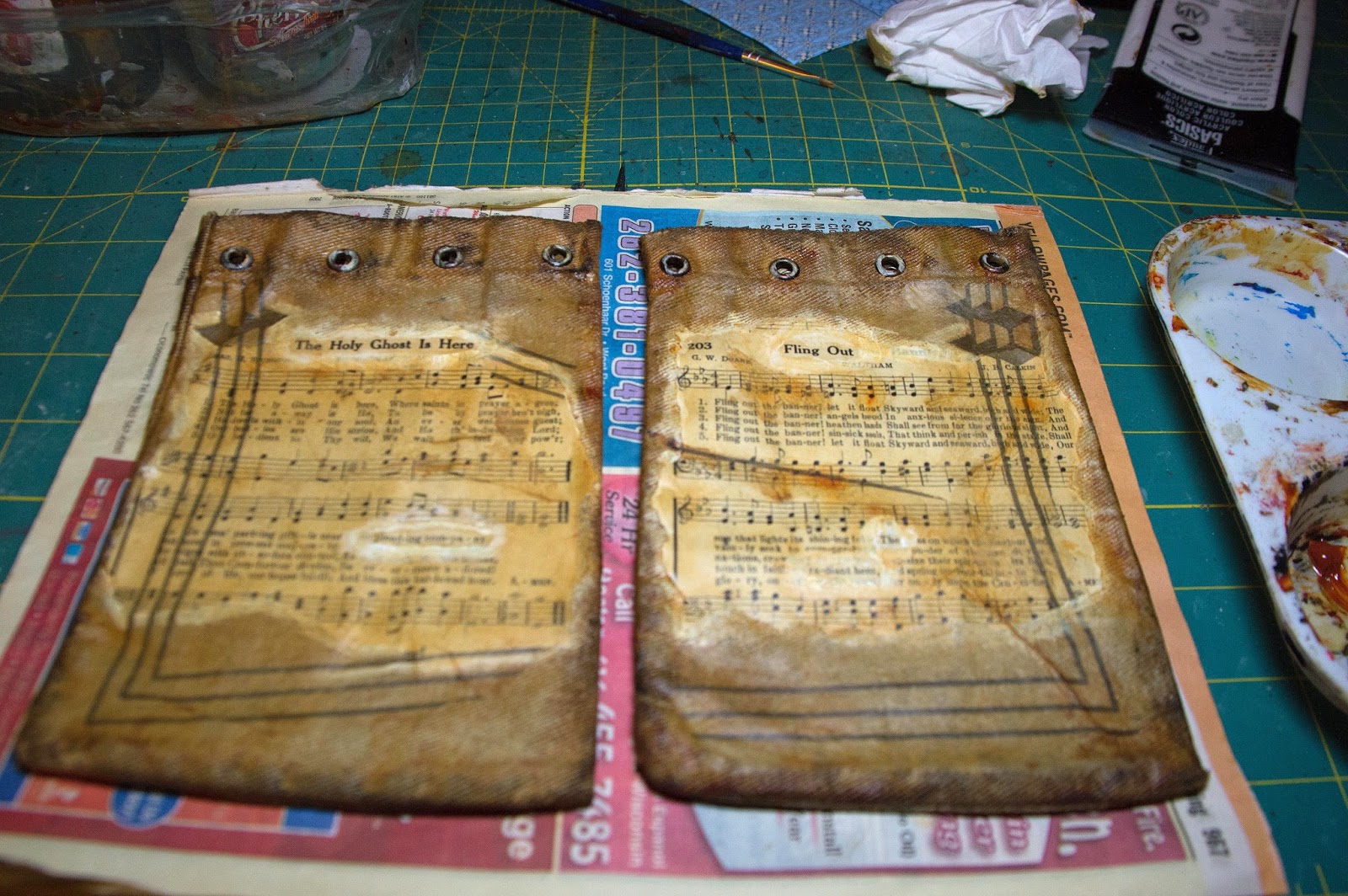 Next step was to use molding paste on the frame to hold in a variety of beads, buttons and tin molds. 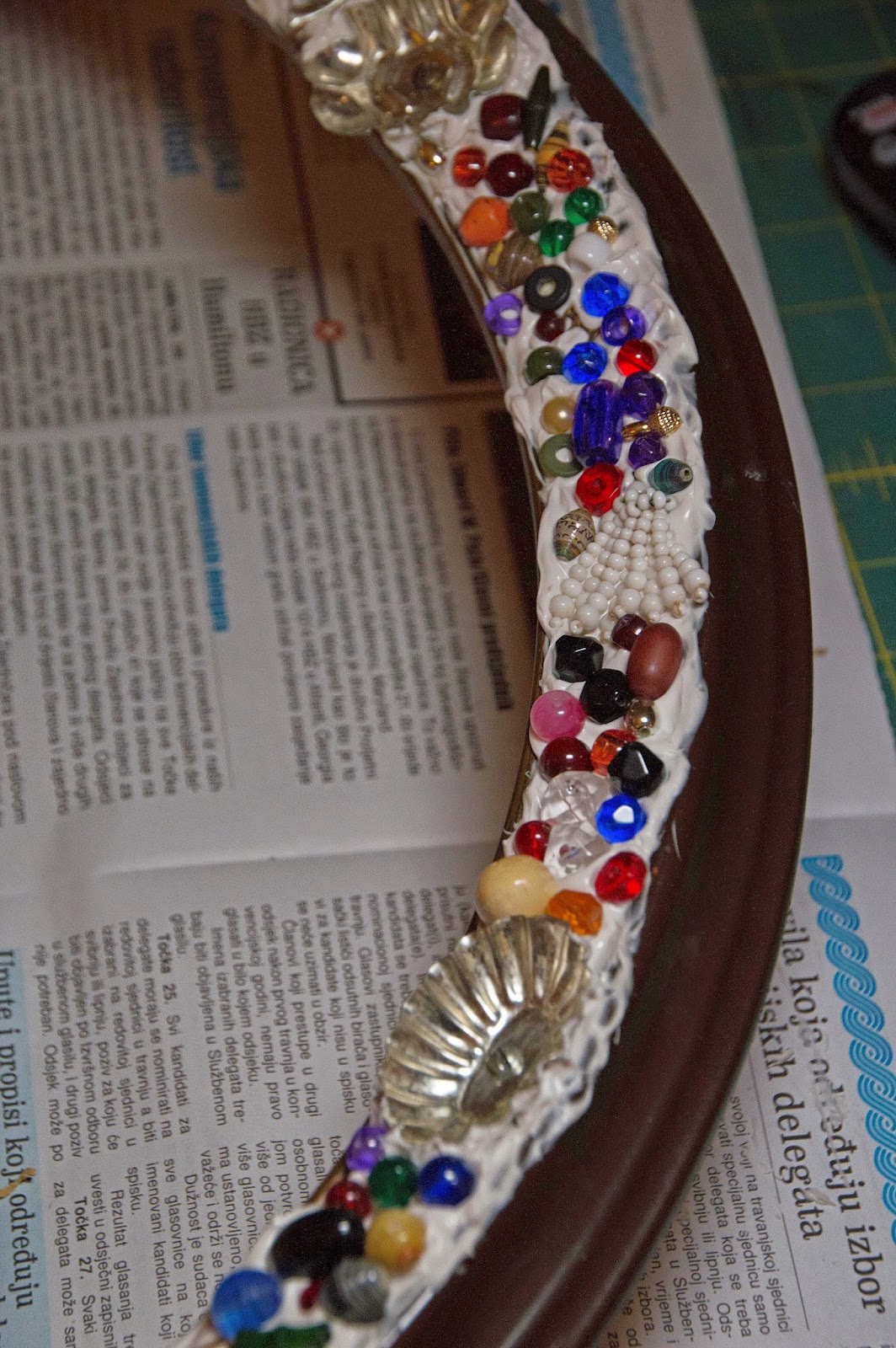 When I stepped back and checked it out, the shape seemed to be calling for something to break the circle so I selected a nicho. 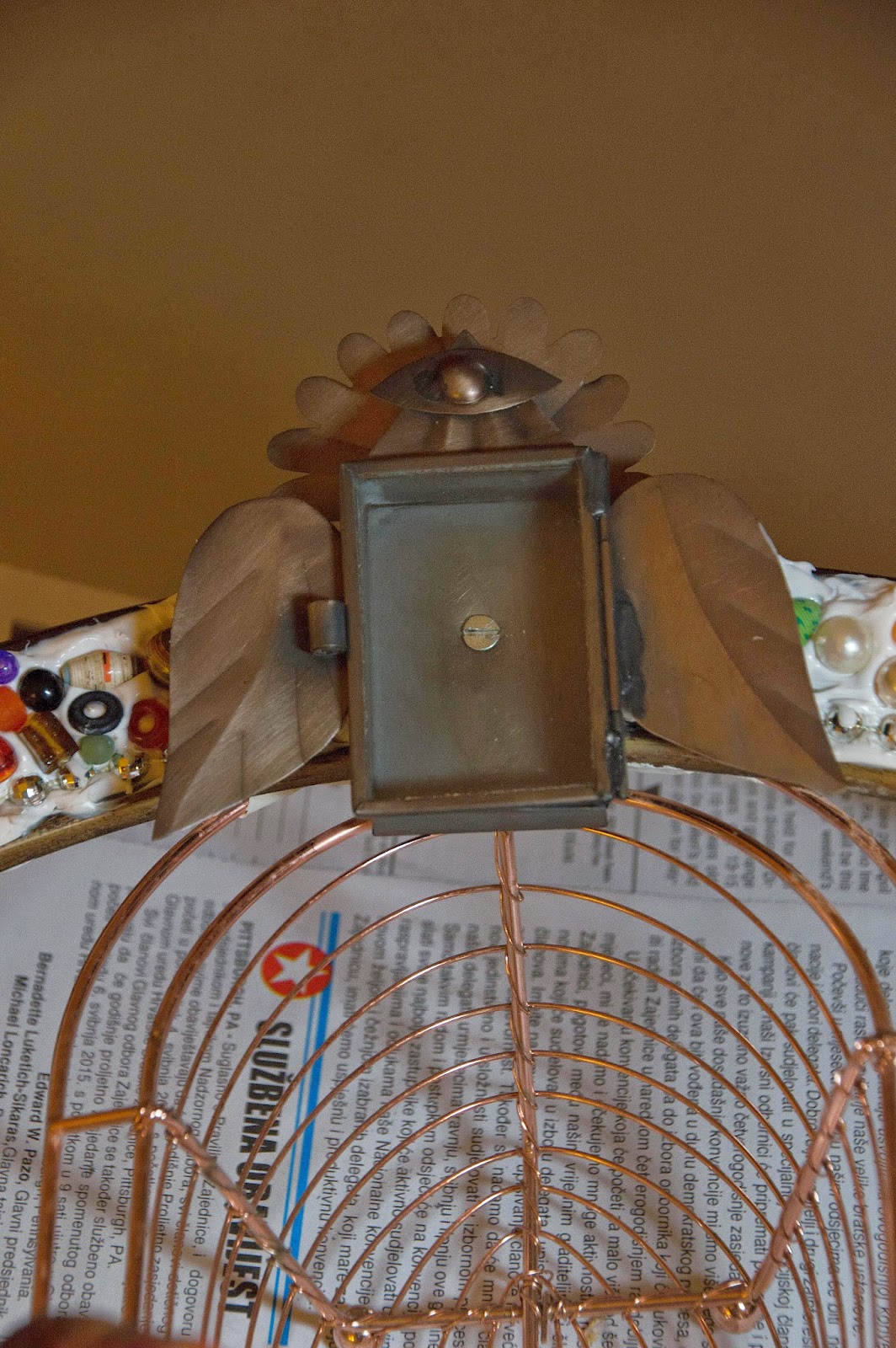 I used dress pattern paper to create the fill on the backdrop. 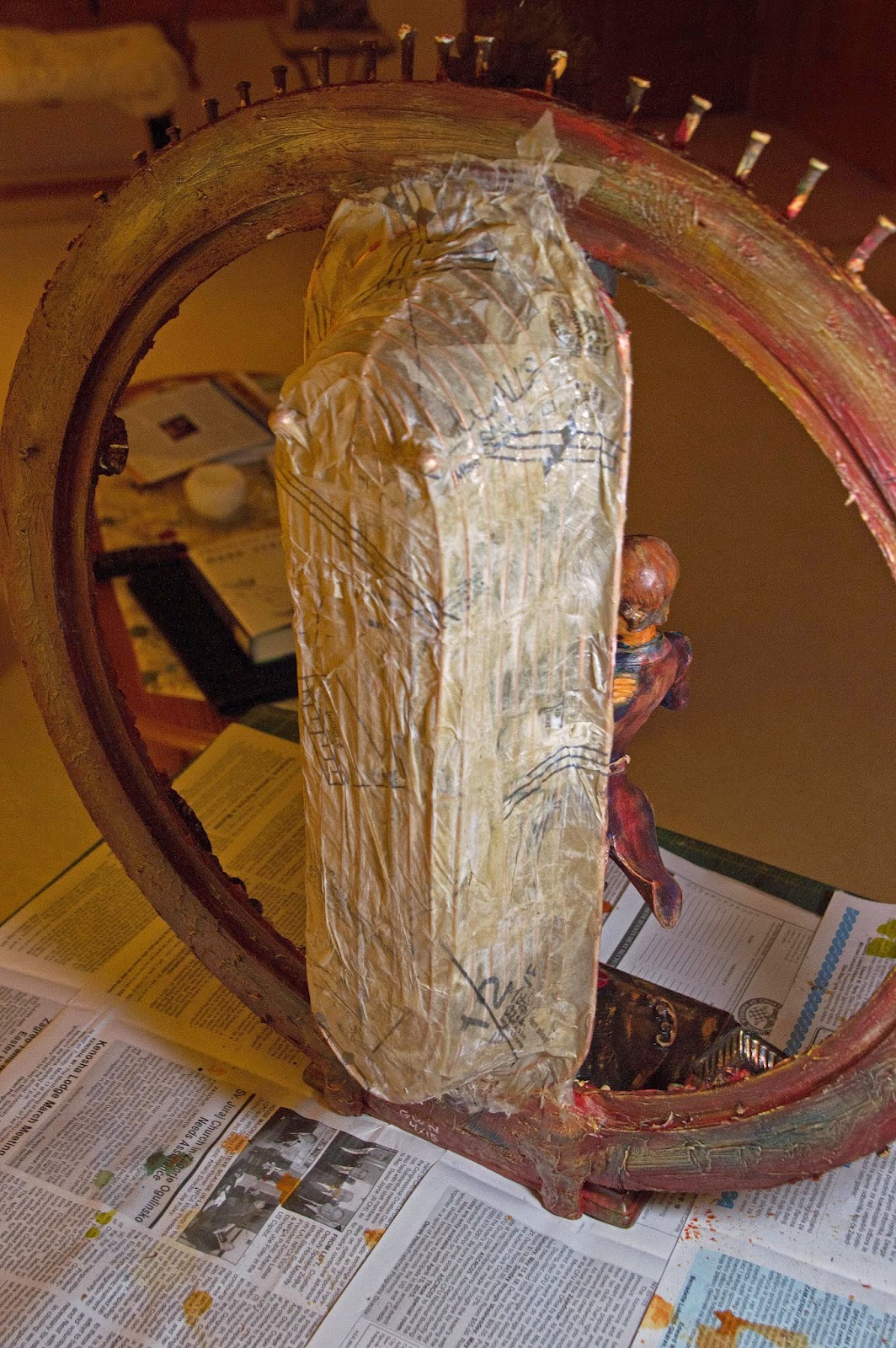 I then added a corazon to the inside of the nicho.  Into the ring of the frame went some nails and then I painted up the whole thing. 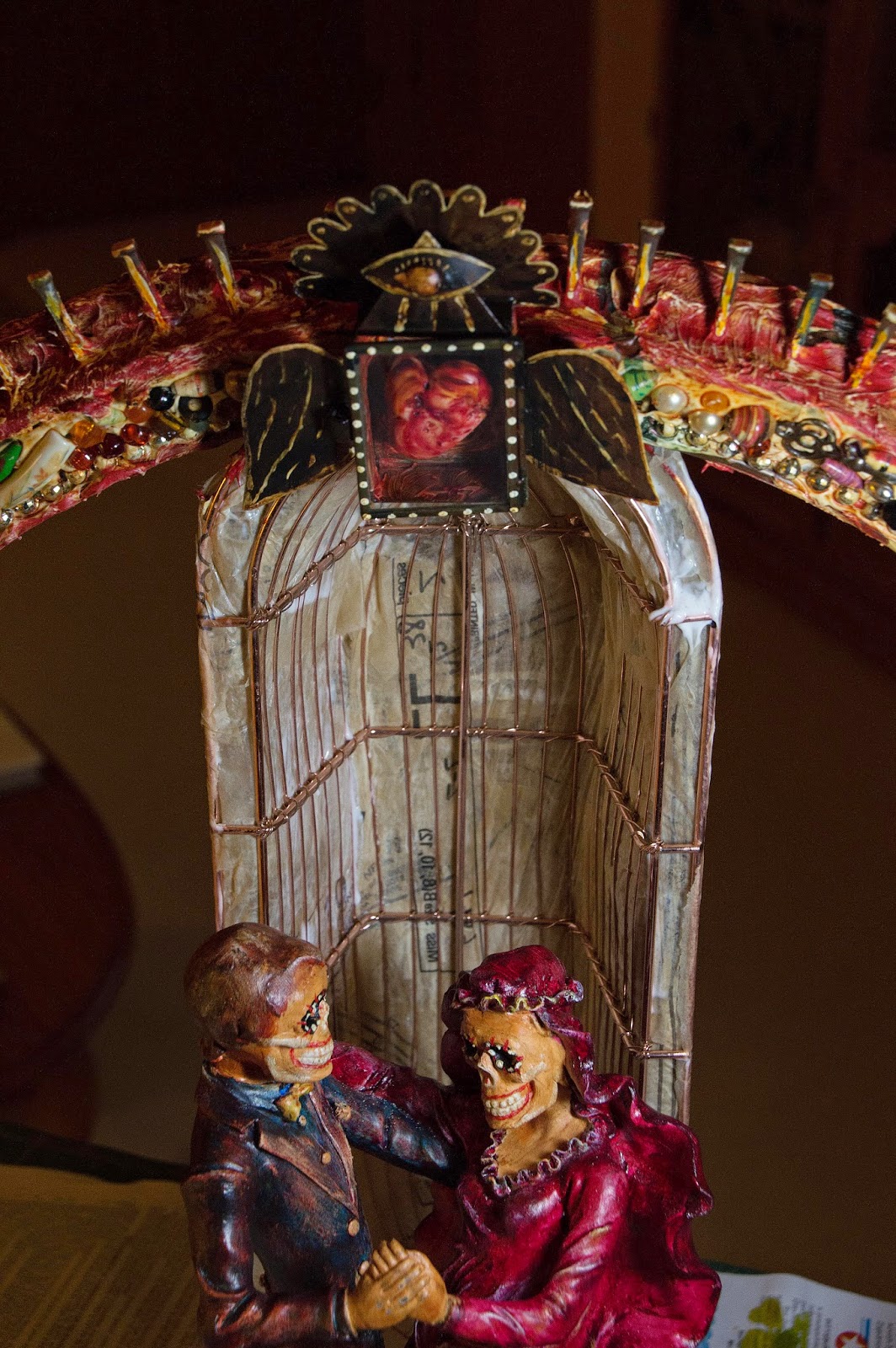 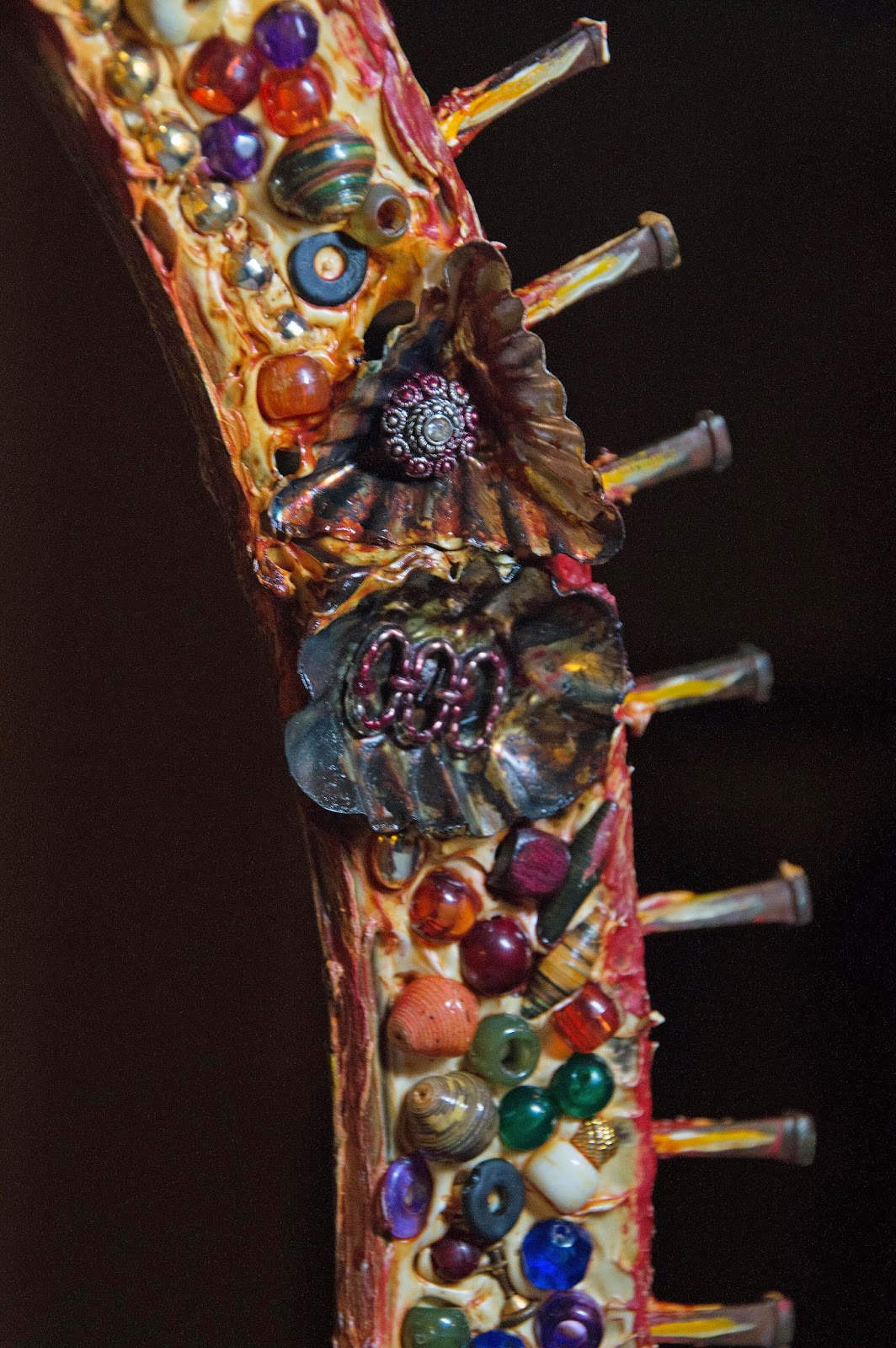 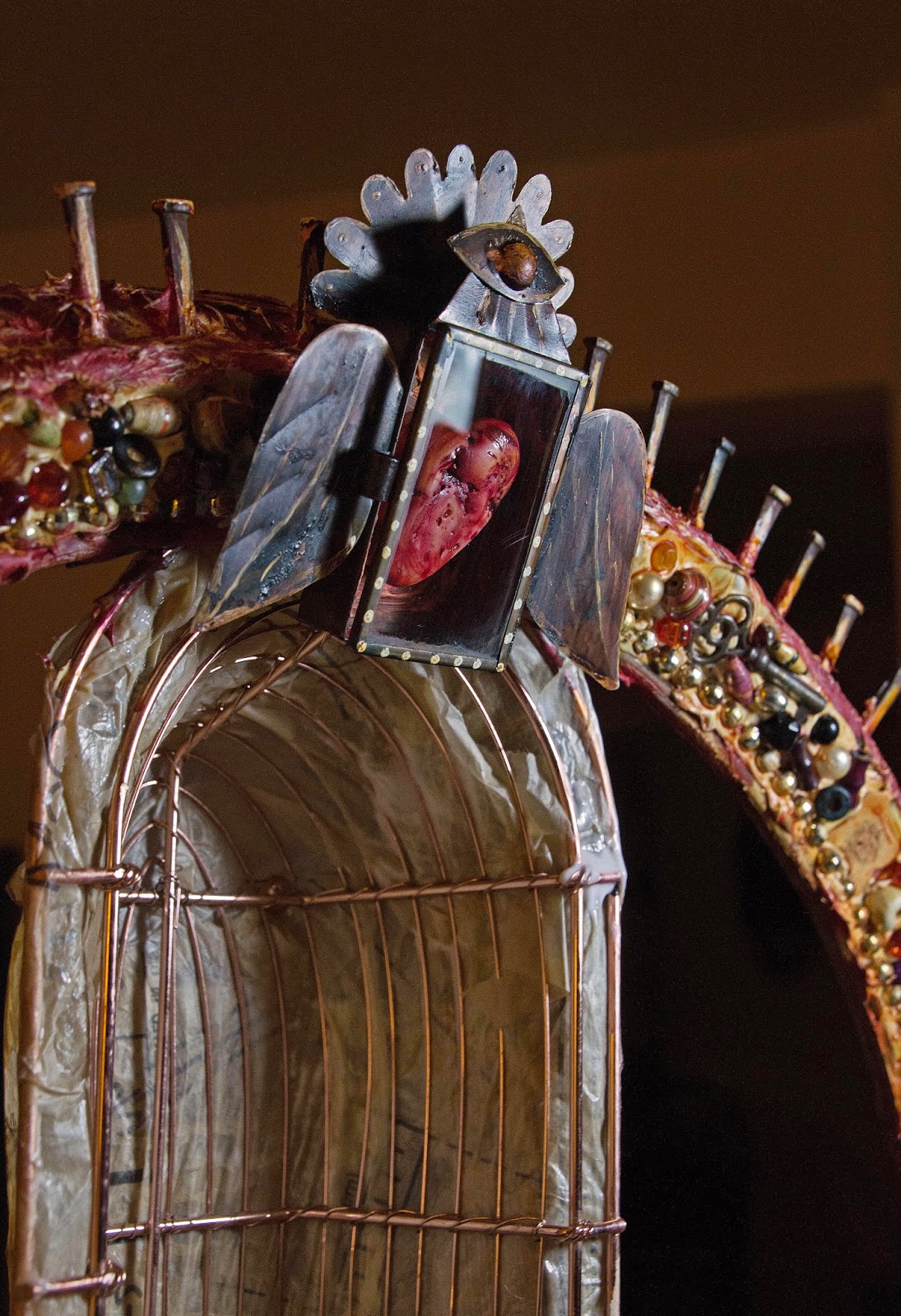 It is funny how sometimes the littlest details can bug the crap out of me but the straight line within the circle created by the hymn really drove me crazy. Just adding a little bean to the space help redefine it and ended my anxiety. 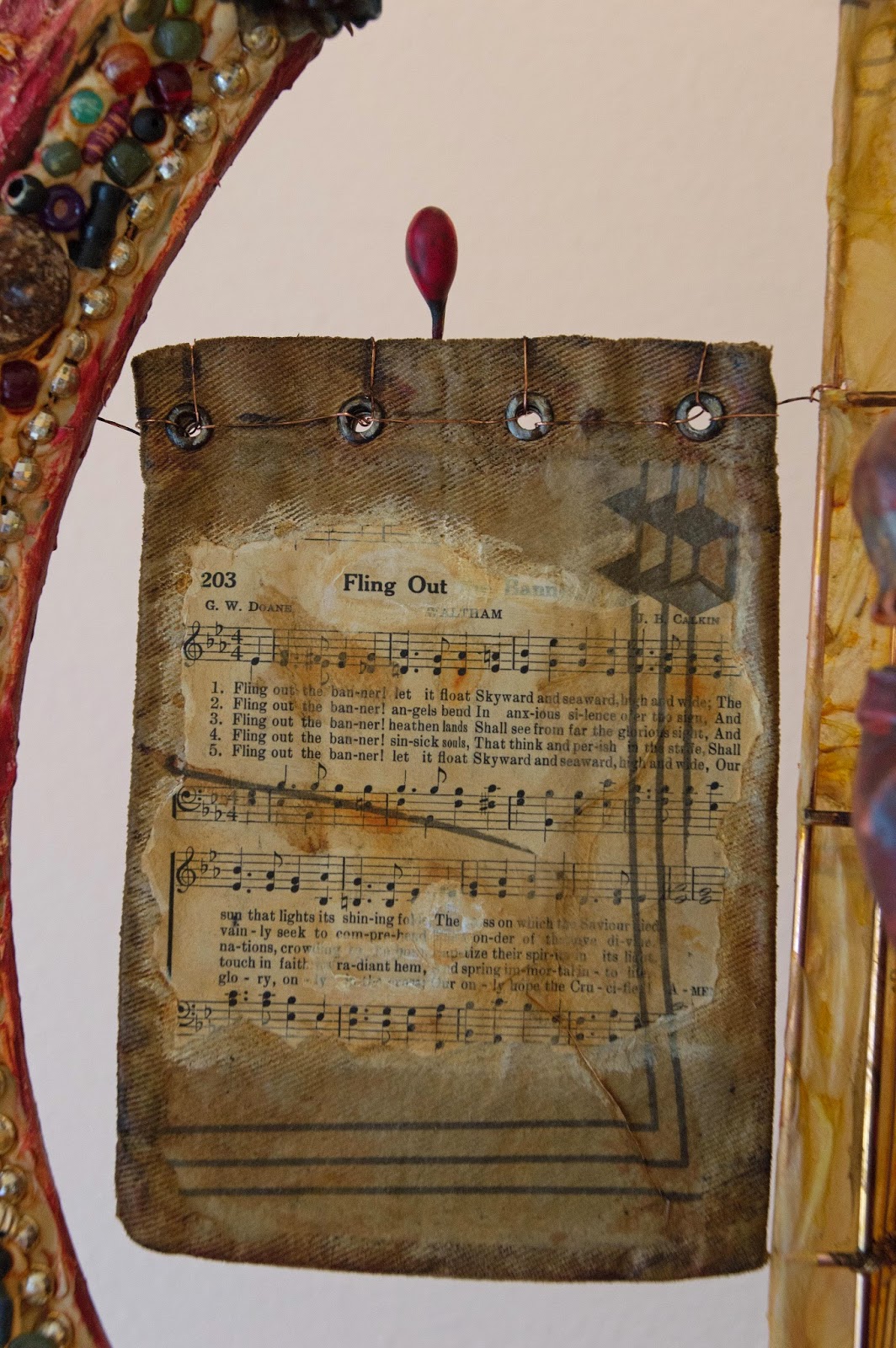 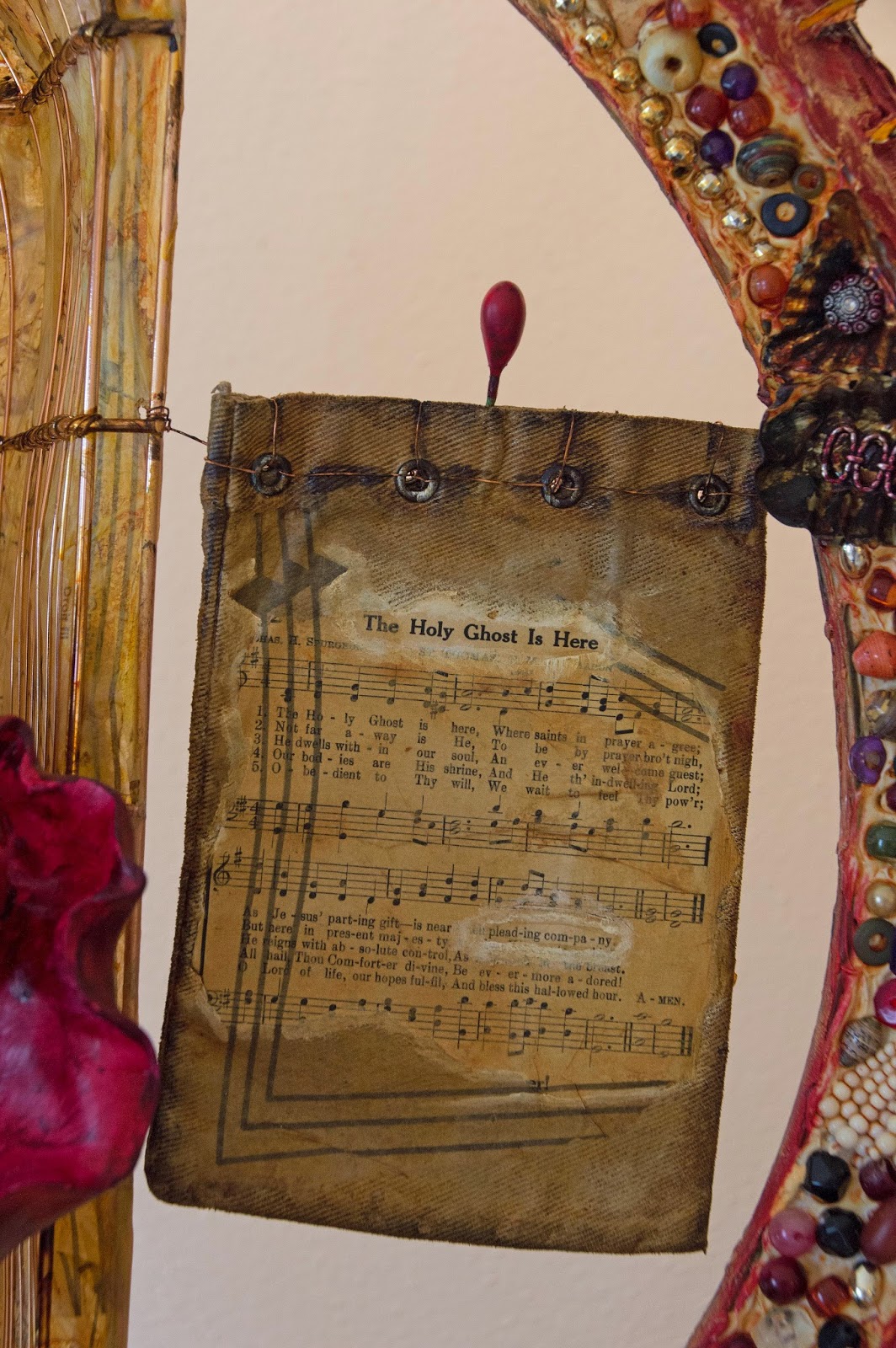 By highlighting the text on the bag, I got my title and my theme.  The scattered text, when strung together, reads like a great poem

And so, after a zillion hours of construction and painting, we have 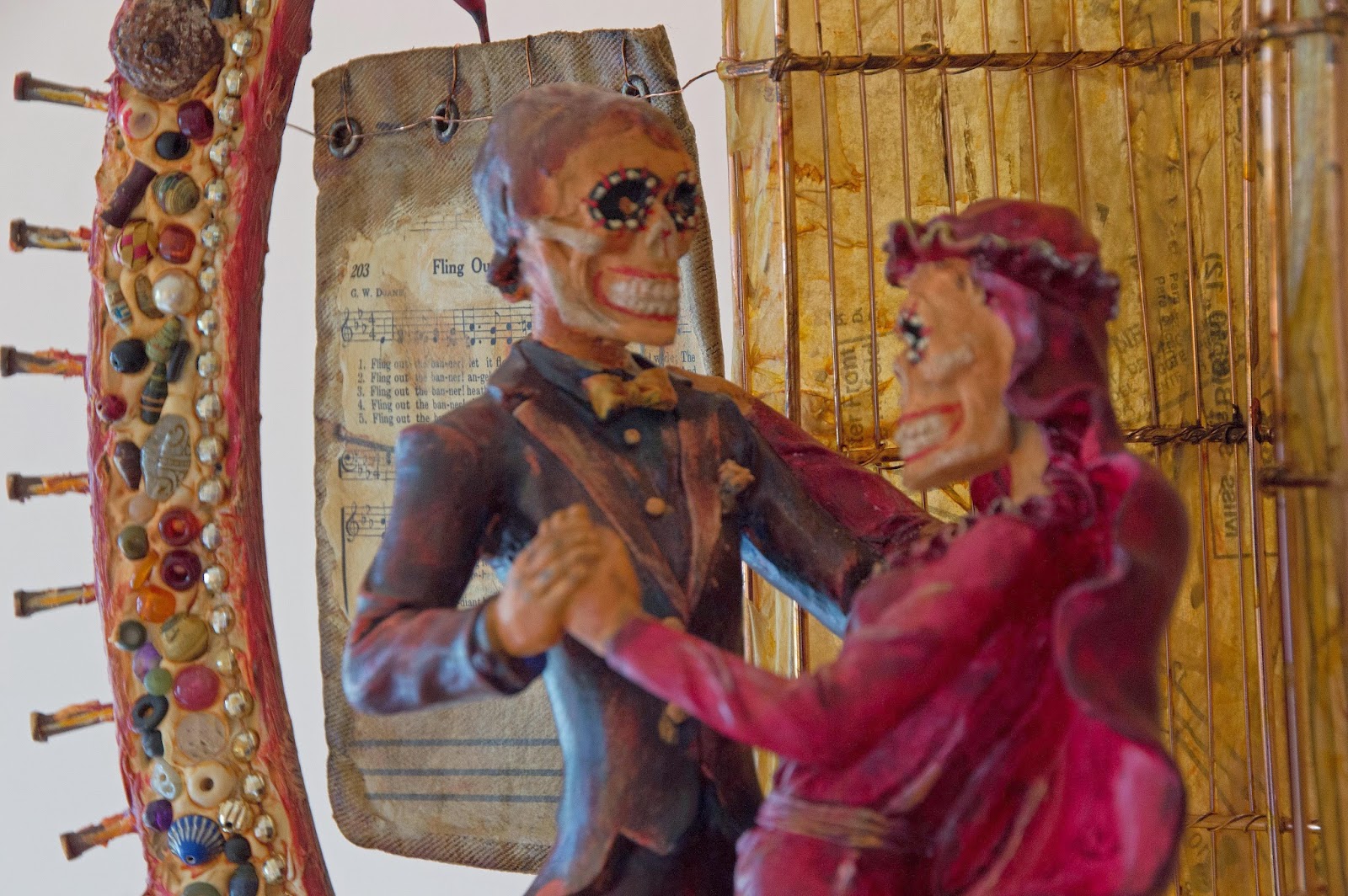 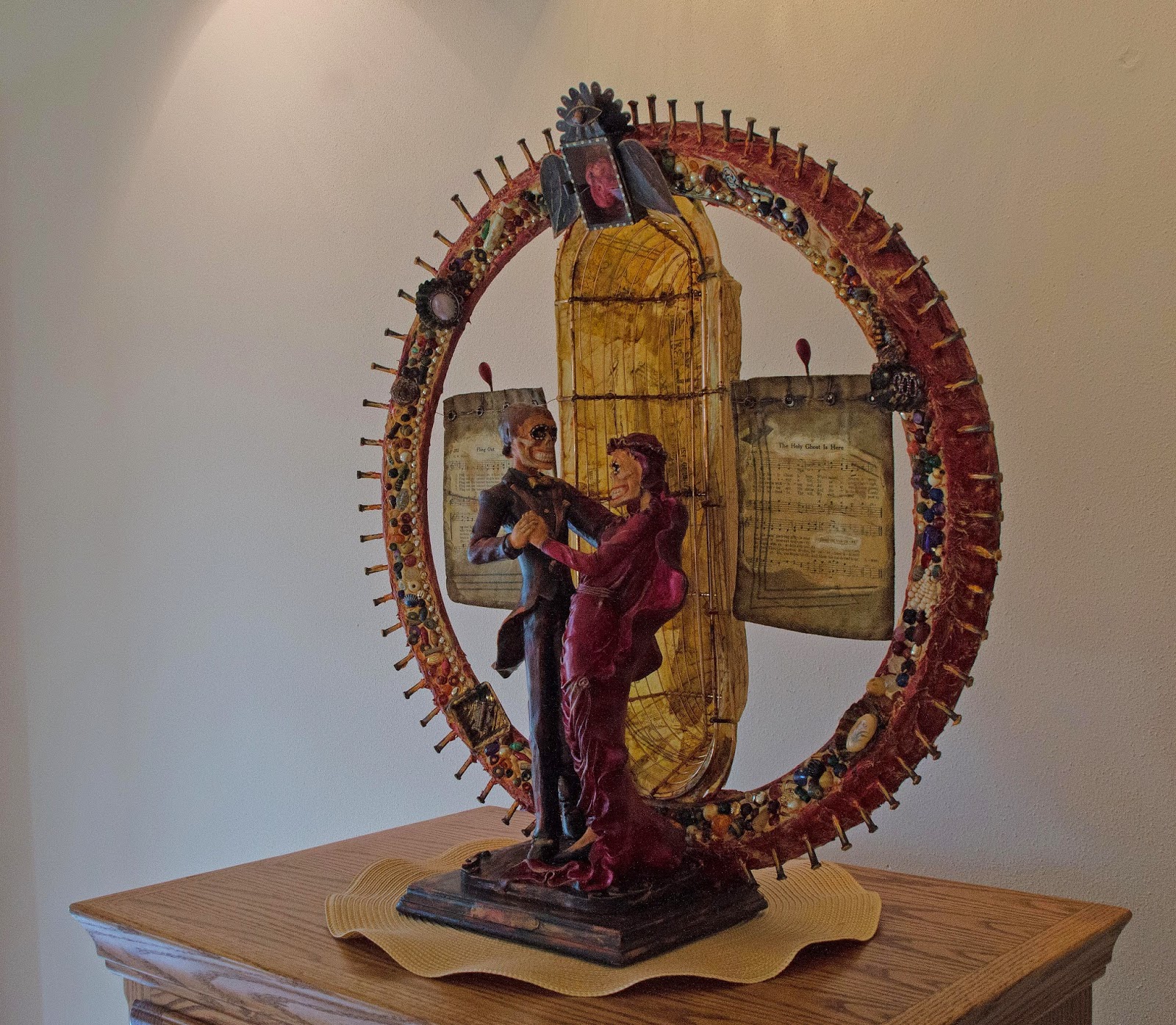 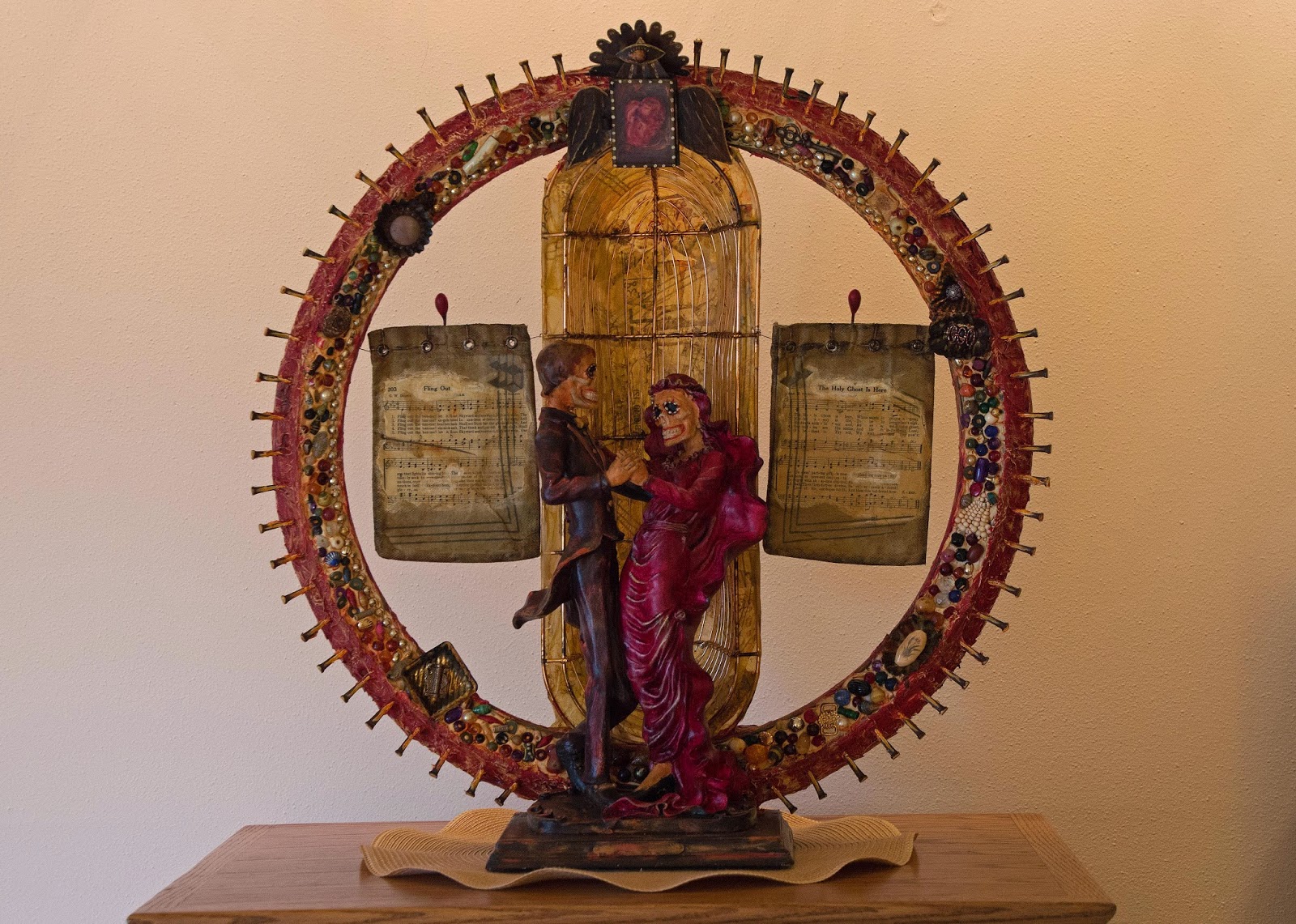