NOIR in NOLA, part one

NOIR in NOLA
Part One

Thanks to a suggestion by Christine Edwards and with a stamp of approval from Michael deMeng, I am going to talk a bit about the subject of our 2019 workshop in NOLA:  Noir.

Noir is the French word for black.  How did it get so identified with an American literary and film style that still resonates today?

In 1945, after the liberation of France by Allied troops including the Americans, a French editor named Marcel Duhamel started an imprint at the Gallimard publishing house called Série noire.  This French editor was reprinting hard-boiled American fiction from the pre-war days that included the benchmark authors of Dashiell Hammett, Raymond Chandler, Horace McCoy, Jim Thompson and William R. Burnett.

According to the Merriam-Webster Collegiate Dictionary, to hard-boil an egg, it needs to be cooked in its shell until the white and yolk have solidified.  The same source says the adjective hard-boiled can be applied to a person who is tough, devoid of sentimentality, and has a matter-of-fact attitude toward violence. 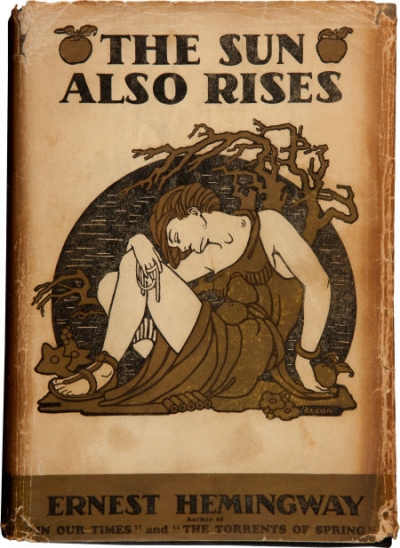 In researching the origins of the term hard-boiled, author Jack Bludis discovered a sentence in Ernest Hemingway’s novel The Sun Also Rises (1926) that reads, "It is awfully easy to be hard-boiled about something in the daytime, but at night it's another thing."

This style got its start in American pulp magazines where authors were paid by the word. While the Golden Age of crime fiction was already in full bloom when hard-boiled writing began, it is easy to see that if a person was killed in the library of an English manor, they would not bleed on the carpet.

This is not true in hard-boiled writing.  One of my favorite lines to illustrate this comes from the work of Carroll John Daly who wrote, "To make hamburger you have to grind up a little meat."  This also illustrates how this writing style is American colloquial language on steroids.

Authors like Ernest Hemingway, Theodore Dreiser, Sinclair Lewis, John Steinbeck and others all use characteristics of the hard-boiled to tell a tale and to make a point.  For our purposes, we are going feature crime writers who wrote novels and short stories that became the fodder for the films that would follow a few decades later. 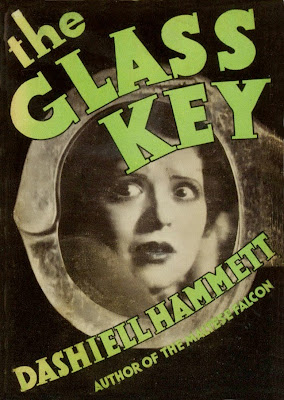 Let us look at Dashiell Hammett.  He is most famous for creating Sam Spade, the devilish hero of The Maltese Falcon (which we can talk about later).  Right now I want to talk about his 1931 novel, The Glass Key.  The novel is important because it is an early example of the rogue as hero.  Ned Beaumont is an enforcer for the politician Paul Madvig whose son has just been murdered.  Beaumont is required to play the detective role for Madvig in order to keep the police out of his business.  As opposed to Agatha Christie and Arthur Conan Doyle, where it was all about restoring justice and order, this novel is about survival at its base level.  Justice be damned--the characters just want to be above ground at the end of the story.  (The 1942 film with Alan Ladd as Ned starring with Veronica Lake and Brian Donlevy as Paul Madvig is pretty darn good.  Another thing to note is the Coen Brothers great crime film Miller's Crossing (1990) is based on this book and Red Harvest by Hammett). James M. Cain may be one of the most important pre-war writers for this style.  We are going to talk about Double Indemnity for sure and most likely some other Cain efforts in this discussion.

What noir literature did was make the criminal the sympathetic hero of the story.  Here are some of the basic things to realize about this kind of literature:

The appeal of noir literature is in watching the inevitable descent of the protagonist into a situation from which he or she cannot escape.  If the person is a criminal, part of the satisfaction may be seeing the world apply justice to him or her.

We hope a hard-boiled hero will be able to remain in control and restore some balance of order to his or her world.  Although this may seem contrary when reading about a criminal, it is part of the appeal of this type of fiction:  unintentionally identifying with the protagonist and rooting for the wrong side.

For noir, I would add these sentences to the definition of hard-boiled (see above):

Film noir, a French phrase that means “black film,” was coined by a French film critic named Nino Frank in 1946 to describe what he saw in the low-budget, crime movies being made in American studios.  This is not that big a coincidence as many of these films were inspired or based on the literature that Gallimard was publishing as Série noire.

Here is the gospel of film noir:  the American film studios and production companies were not aware of creating a style.  The makers of these films were busy making films and were not particularly aware of making movies within what would be retrospectively called a part of a unique style.

That being said, ever since Warners started making crime films, Hollywood knew that crime pays in the theater.  The film makers were always up against the production codes and the censor but in this case that was OK because the game became letting the bad people do anything they wanted (within reason) as long as they died in the end.

Where did the film noir style develop?  So many people involved in the Hollywood of the late 30s through the 50s were European immigrants, many fleeing Germany or the Nazi invasions. 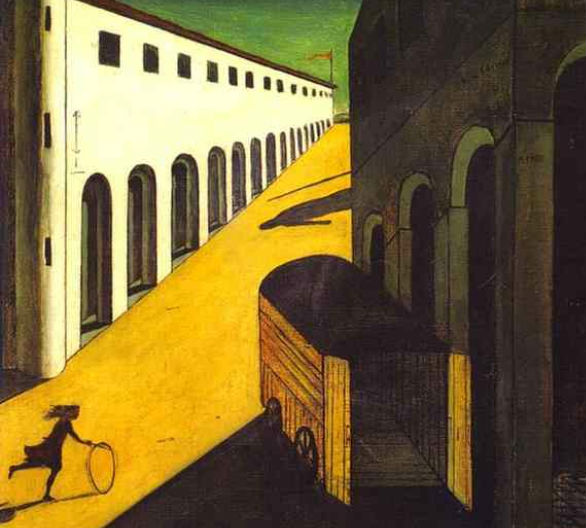 If you were a part of the Why Art History Doesn't Suck: Surrealism on-line workshop by Michael you will recognize this picture.  It is shadow dependent and the image raises all sorts of questions in our minds because of their use.

One of the biggest influences on film noir style was German Expressionism. German expressionist cinematography dealt with the same issues its film noir Hollywood counterparts would including low budgets.  In Germany, this meant the style developed these cheap, non-realistic, geometrically challenged sets that were painted rather than built.  The directors and cinematographers were forced to be artists within these limitations.

What are the essential basics of a film noir?

Shot on location with almost a documentary style 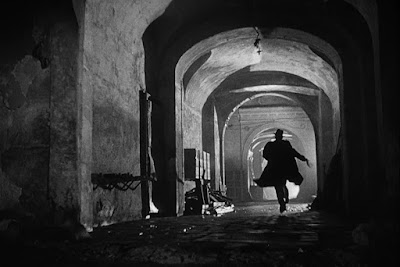 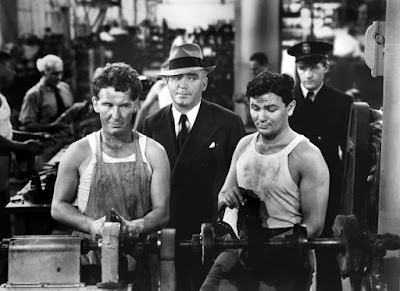 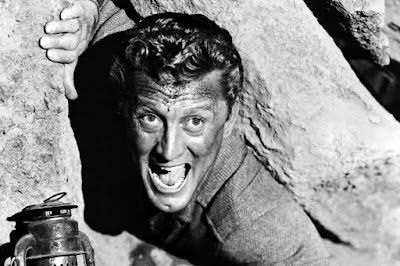 Deep shadows—light, or the absence of it, is the key 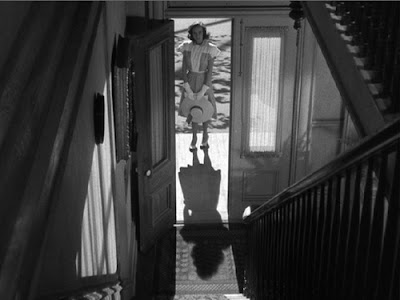 Behavior over dialog (yet voice over narration) with flashbacks 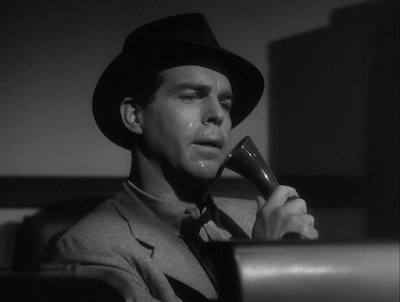 What is reasonably the first film noir? 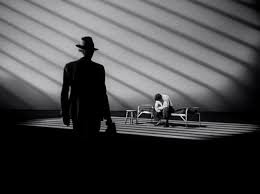 Stranger on the Third Floor (RKO, 1940, directed by Boris Ingster from an original screenplay by Frank Partos, starring Peter Lorre and John McGuire; budget:  $171,200). This film centers on a newspaper reporter who testifies as a witness in a murder trial in which an innocent man is found guilty. Immediately after the verdict is delivered — following a trial in which one of the jurors is caught snoring during crucial testimony — the reporter begins to doubt his own testimony and to wonder whether the convicted man might be a victim of circumstantial evidence and an over-zealous criminal justice system. When he later discovers that his next-door neighbor has been murdered, he realizes that he himself could be convicted of the second murder through circumstantial evidence. 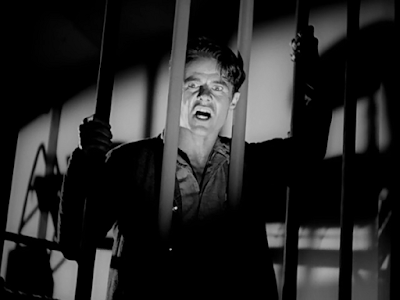 Why Ingster?  He was born in Latvia, directed only two other Hollywood films and ended up a TV producer for such shows as Wagon Train and The Man From U.N.C.L.E. 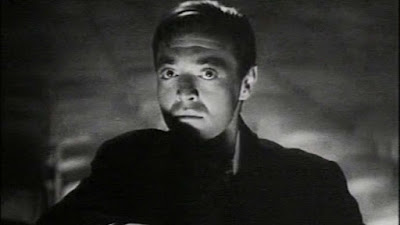 Perhaps a key is the budget for this film:  Peter Lorre owed RKO two days on his contract and was given this role with few scenes and few lines, but received top billing.

The film noir glory days ran from this film to the late 1950s.  It is important to remember that with a few exceptions they were B movies—the low budget second film in a theater to fill out the night’s experience.  Film scholars have identified over 300 films as noir.

So here is your suggestion for February to get prepared for the shadows of NOLA:

The source for this film is a novella written by Graham Greene for the purposes of having a base for the film script.  Greene's story is set in post-WWII Vienna and it deals with a post-war issue:  the black market.  The film was directed by British director Carol Reed whose long career would lead to an Oscar in 1968 for Oliver!  Reed's vision for this story is what drives this film: it is one of the most gorgeous film noir and may be at the top of the list for use of set including the night visions.

The film stars Joseph Cotten, Valli, Orson Welles, and Trevor Howard. Those unfamiliar with the film may still be familiar with its score because of the famous zither used for the theme.  This film was selected as the best British entry at the Cannes Film Festival.  Carol Reed was nominated for an Oscar as was the film editor Oswald Hafenrichter.  The film won an Oscar for Robert Krasker's cinematography which is well deserved.

What?  I thought this was an American film style?  Yeah--deal with it.  This film is great at showing us the shadows and it is my blog.

See you in March. 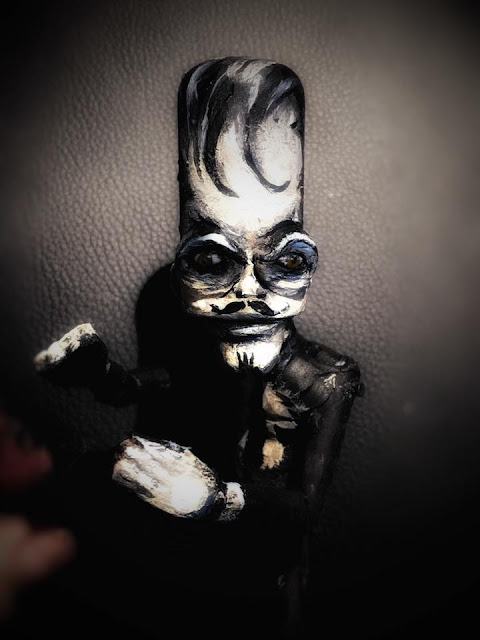 Posted by gary warren niebuhr at 11:55 AM