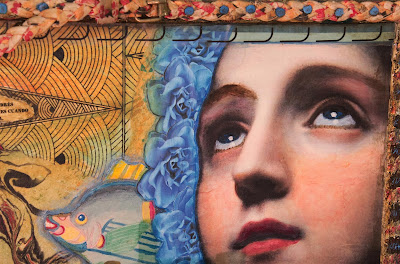 Time for another on-line workshop with Michael deMeng.  This one is Strange Tales of Magic & Miracles.

Here is the workshop description from Michael:  "Have you ever had one of those experiences where some seemingly inevitable tragedy was about to take place?  Then, out of the blue...an unexpected miracle occurs.   In Mexico, there is a tradition that addresses such strange inexplicable events called ex votos.  Ex votos are small paintings that depict the moment of tragedy or potential tragedy and give thanks to intervening supernatural forces.  In this class, we are going to create mixed media interpretations of this art form.  Collage, painting, metal embossing and assemblage will be used to create a representation of a personal miracle.   So...do you believe in magic?"

Behind the idea of ex-votos (the thank you for a miracle) and a shrine (remembering the things that have past) is an obstacle.

I had already made an ex-voto in Mexico with Michael in 2015 that is one of my favorite and personal pieces of art that I have ever made:  a thank you for the miracle that is my wife Denice. 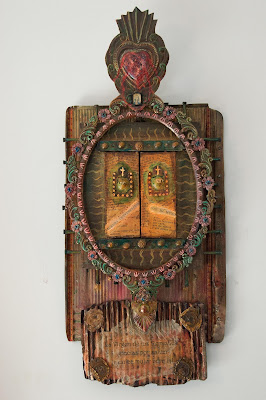 For this workshop I felt like I was free to make an ex-voto that was not about me.  I tried to make one that is in the style of the original ex-votos... 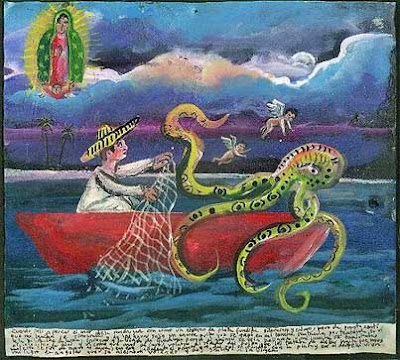 ...but includes the 3D work that Michael was teaching in this workshop.

I started with the abandoned top to a cigar box. 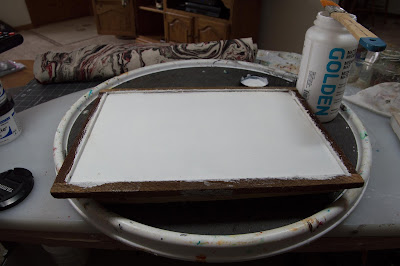 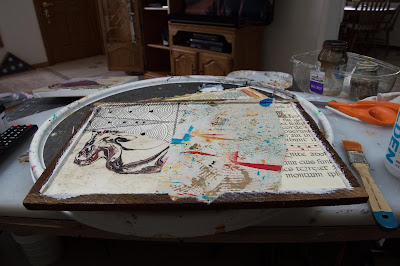 This on-line workshop had a special guest star but Michael did not have to pay any travel expenses to do the filming.  The collage portion of the workshop was taught by his wife, Andrea Matus deMeng. The basic collage goes through a lot of changes to move from what is shown above to what was achieved.

Most ex-votos have an inscription thanking the special saint(s) who saved the sufferer from their ultimate fate.  My ex-voto has an inscription in Spanish which is supposed to translate as: Thanks to Saint Peter and Saint Andrew for saving me from the fish when I fell overboard. 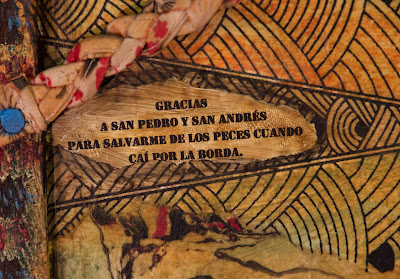 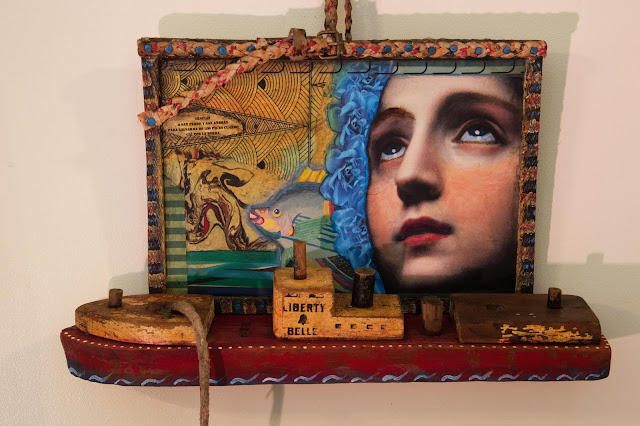 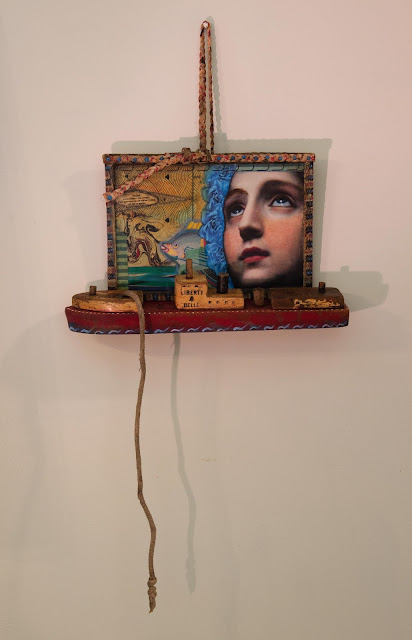 The second portion of the workshop was shrine building.  This is how I came to assemblage and it was great to get back to the origins.

As I began to work on this I decided to blend the purpose of the ex-voto with the idea of the shrine.  I researched a saint to thank and came up with "Saint Catherine of Bologna (8 September 1413 – 9 March 1463)--an Italian Poor Clare nun, writer, teacher, mystic, artist and saint. The patron saint of artists and against temptations" from the fountain of all knowledge, Wikipedia.

The beginning work on this project was started at a Make What Ya Brung at Shake Rag Alley in Mineral Point, WI. 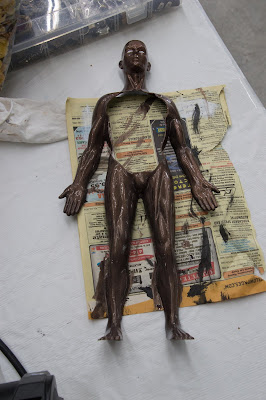 I decided to start the project with something to represent me and selected a vintage Visible Man figure.  One of the techniques Michael teaches is rusting and this guy got the full treatment.

I selected a busted guitar as the base for the shrine. 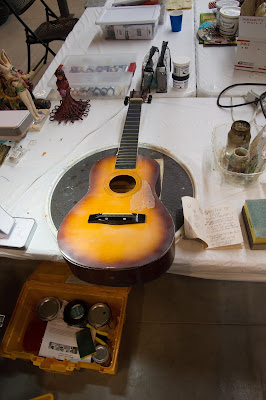 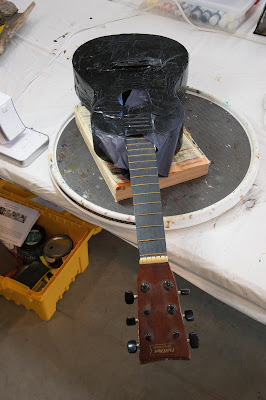 At Make What Ya Brung it got the paper mache treatment taught at a recent workshop by Michael Shemchuk at Crystal Neubauer's studio in Racine, WI.  Then everything went home where the project was completed. 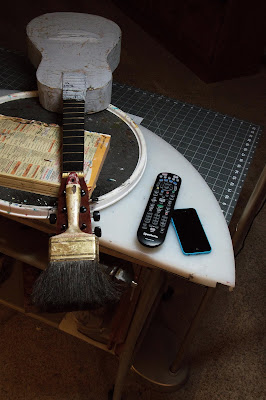 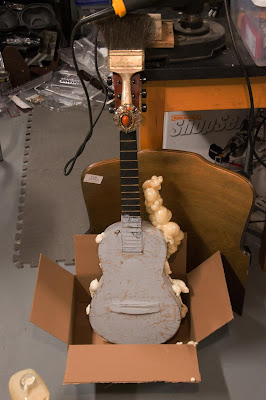 I decided to firm up the guitar by using Great Stuff.  As you can see, it does expand to fill the space, doesn't it?

Then it was time to start attaching stuff... 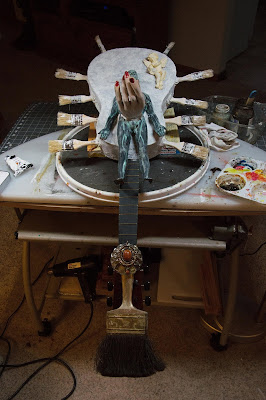 ...and begin the painting. 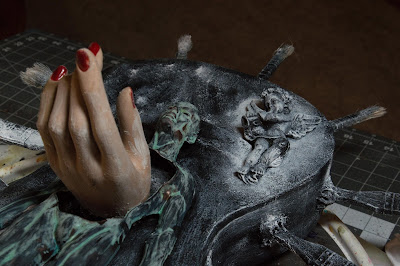 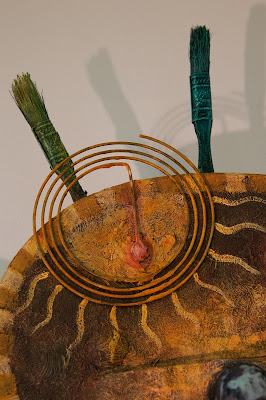 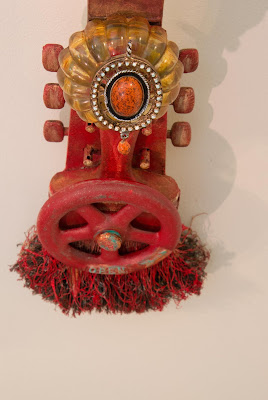 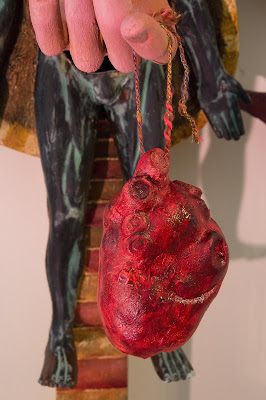 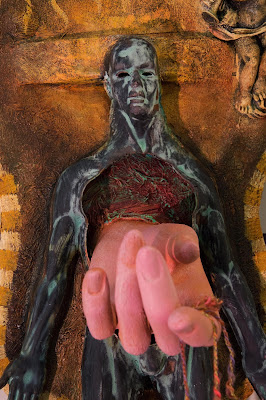 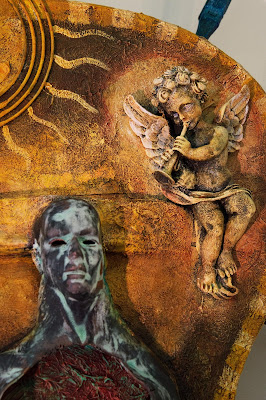 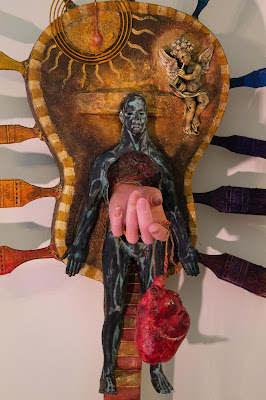 The idea behind this one is that the painting represents the 12-point color wheel.  There is a lot of color going on in this one and although that is cool I am not sure I executed this project as well as I could.  Time will tell if I go back with a paint brush to "improve" it.

The ex-voto inscription is as follows:

Thank you, St. Catherine of Bologna, for introducing me to Katherine Engen and Michael deMeng, so that I could become an artist. 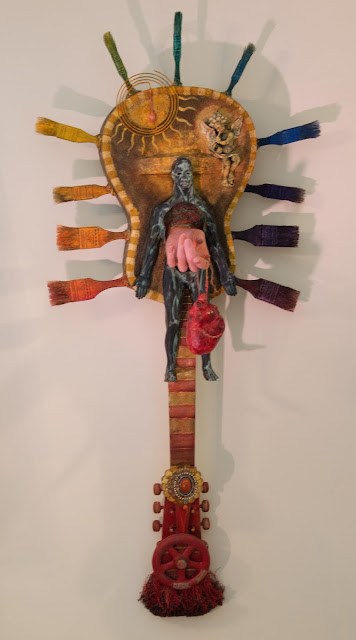 Thanks to Michael deMeng and Andrea Matus deMeng for a great on-line workshop experience.  Visit them at https://www.michaeldemeng.com/michaeldemeng or https://www.andreamatus.com.