When last we were discussing my project from NOLA, I knew all along that in order to get it home in my tool box it was going to have to stay very north-south.  It was always my intention to make it east-west when I got home.

The cool thing about junkin' your own basement is you can always find something that works.  I have a bin full of things that are flat and round and when I dove into it I pull out this rusty circle that I remembered thinking it was so cool when I bought it, probably for 50c, until the guy told me it was an old basketball hoop.  Now, it was still cool, but not that cool--but now I had picker's freeze--no way was I going to put this back.  It came home and now became the perfect addition to my piece. 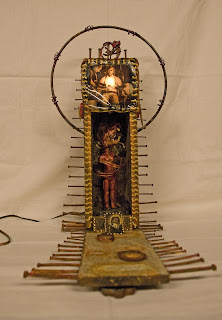 I have also fallen in love with what I call barn nails.  I have them in every size from less than an inch to almost four inches in length.  For this project, I wanted the nails to not be symetrical but rather seem to make the piece flow inward and outwards, so I attached a ton of various length nails. 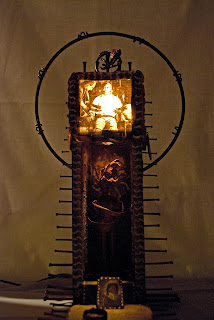 I also have fallen in love with lighting everything up like a Christmas tree.  I am not sure when this would ever be exhibited in a dark gallery but I think it is a cool effect, especially because of the subject of the transfer. 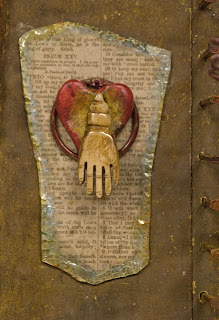 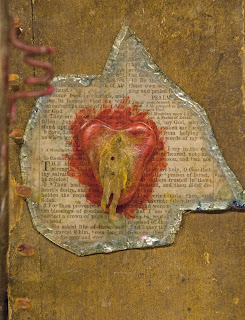 The use of text was very important as I told you before and I was chilled a little at the random but significant way the words appeared in the area of the shrine where gifts can be left. 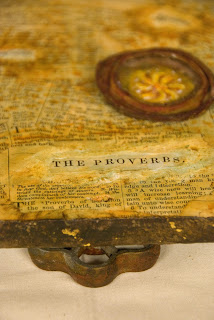 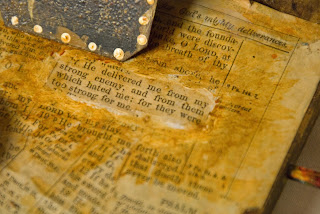 I am really happy with the look of the piece.  Here is my story about what it means. 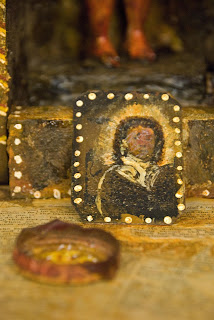 The tintype photo is a picture of the woman who haunts this work and the spirit to whom the offerings are made.  She once had her man and he loved her like no other woman. 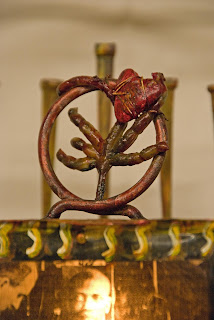 But, as sometimes happens, a woman can do something very wrong.  Unintentional, accidental, unavoidable.  When this woman made her mistake, her man loved her so much that he confessed to her crime.  Ultimately, he was sacrificed to his good intentions.  Did this set the woman free?  Would he have suffered worse without her?  Does she suffer more knowing she lost him to her own actions? 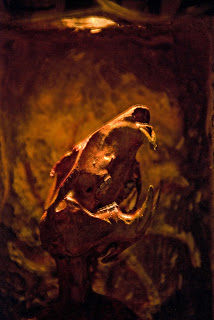 The answer is there is not a day she did not feel such guilt that eventually she was swallowed up by the pain and committed suicide.  His noble deed has only made her feel worse.  Her ghost still roams, unable to reconcile how his good deed did not abolish her bad actions, and thus she becomes Our Lady of Unintended Consequences.

So, after 20 hours of work and about $25 worth of materials, we have a finished NOLA shrine.
Posted by gary warren niebuhr at 12:42 AM