As a member of the Mixed Media Art on Facebook group hosted by Patri Ross I was able to join their first challenge called "Forming Friendships: 3D-Doll-Puppet Form Challenge." Patri matched us with other participants and my exchange partner is Sarah Cooper from Ottawa, Ontario, Canada.  So my first goal became not to upset the delicate balance between the US and our neighbors to the North.

The project was to build a figure, puppet, or doll no larger than 10-12" high, with some sort of movable parts. It was viewed as a visual way to share a little bit about yourself.  The sign up was in August and the piece had to be mailed by October 15th.

I started with a torso from some superhero or wrestler toy and a small tin airplane I picked up somewhere.  I wanted to use this opportunity to address how making art has affected me in the last few years, or I guess you could say: given me the opportunity to fly.  Aaaawwwwhhhhh.  Oh, yeah, and I thought the toy figure was as close a representation of my figure that I could find. 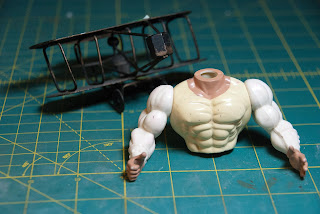 The first thing I did was use an old bottle opener to create a frame for a transfer of my baby picture with a watch cover.  The watch face went on the neck to indicate that the clock is always ticking. 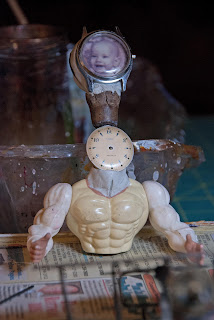 While that Apoxie Clay was drying, more of that was being used to keep two wooden Dutch shoes attached to the landing gear of the plane.  I would have preferred to use baby shoes but all the baby shoes I had in my found objects (ie: junk) were way to big.  Also, the propeller was formed by adding a watch spring. 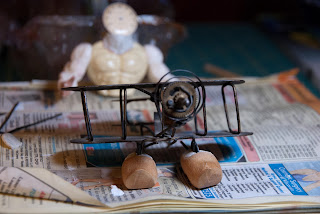 Then it was time to clay things together and texture up the body prior to painting. 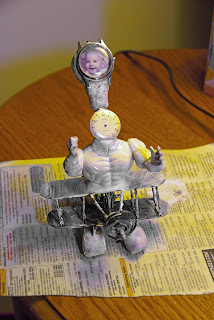 I added some other goodies to the back of the plane during the painting process.  They were three gears to enhance the tail section and one piece for a rear tire.  I also decided at some point this little guy needed to be holding something so a piece of metal (most likely a typewriter part) went in his hand.  In the end, this little guy's arms move up and down so he can be adjusted to his mood:  throwing the metal like a spear, holding it like a piece of art, etc.

The only issue I had putting this guy together was that despite using all the scientific principals of physics when putting him together, he listed to the left (my left, your right) so that I had to use some Apoxie to give him a lift.  If you should ever meet him, please do not mention this as he is sensitive about his height. 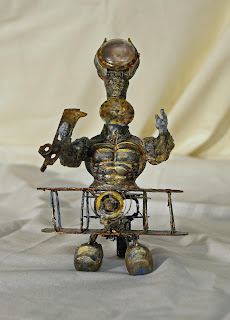 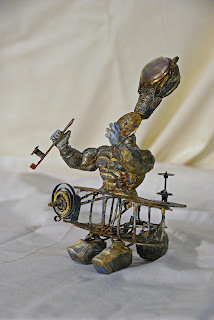 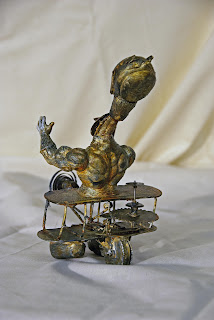 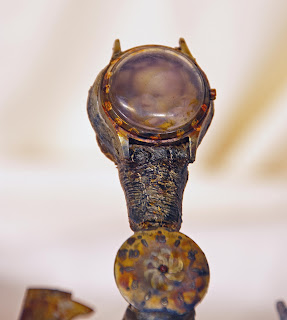 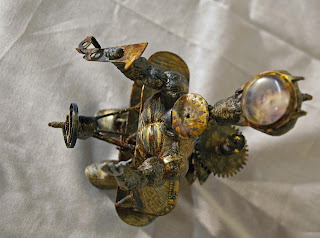 Here is the piece I received back from Sarah:  Clara.  Clara is articulated and floats sideways as she is wiggled. 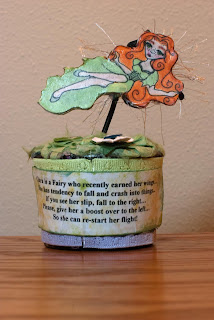 Clara is a Fairy who recently earned her wings...
She has a tendency to fall and crash into things...
If you see her slip, fall to the right...
Please, give her a boost over to the left...
So she can re-start her flight!

Thanks, Sara!
Posted by gary warren niebuhr at 6:10 PM