Over on Facebook there is a group called Objet Trouve started by Roxy Lentz.  The subtitle of the group is "Find Four People, Find Four Ugly Objects, Share With Them, Make Art."  Here is the verbiage from her explanation of the group:  "Objet Trouve is a French way to say, 'I made something from trash.' Here is the plan. Form a group of four people who are artists of the same venue as you. They can be from a group you belong to, or a friend from a group on the internet. Then each person in the foursome finds an ugly object, divides it into four pieces, keeps one piece, and sends the other three pieces to the other three in the group. Then each of you in the foursome have one piece of four ugly things. Then, you make it into art. This not an organized project, it is just something for fun if you want to join in...The objects you receive can be altered in any way desired. You can add other materials to make the art. It may be impossible to use the objects entirely, but the point fairy gives extra points if you do."


Let's Get Ready to Assemblage

In this corner, from Milwaukee, WI, weighing in at 2 oz., Gary Warren Niebuhr's Rusty Bent Nails. 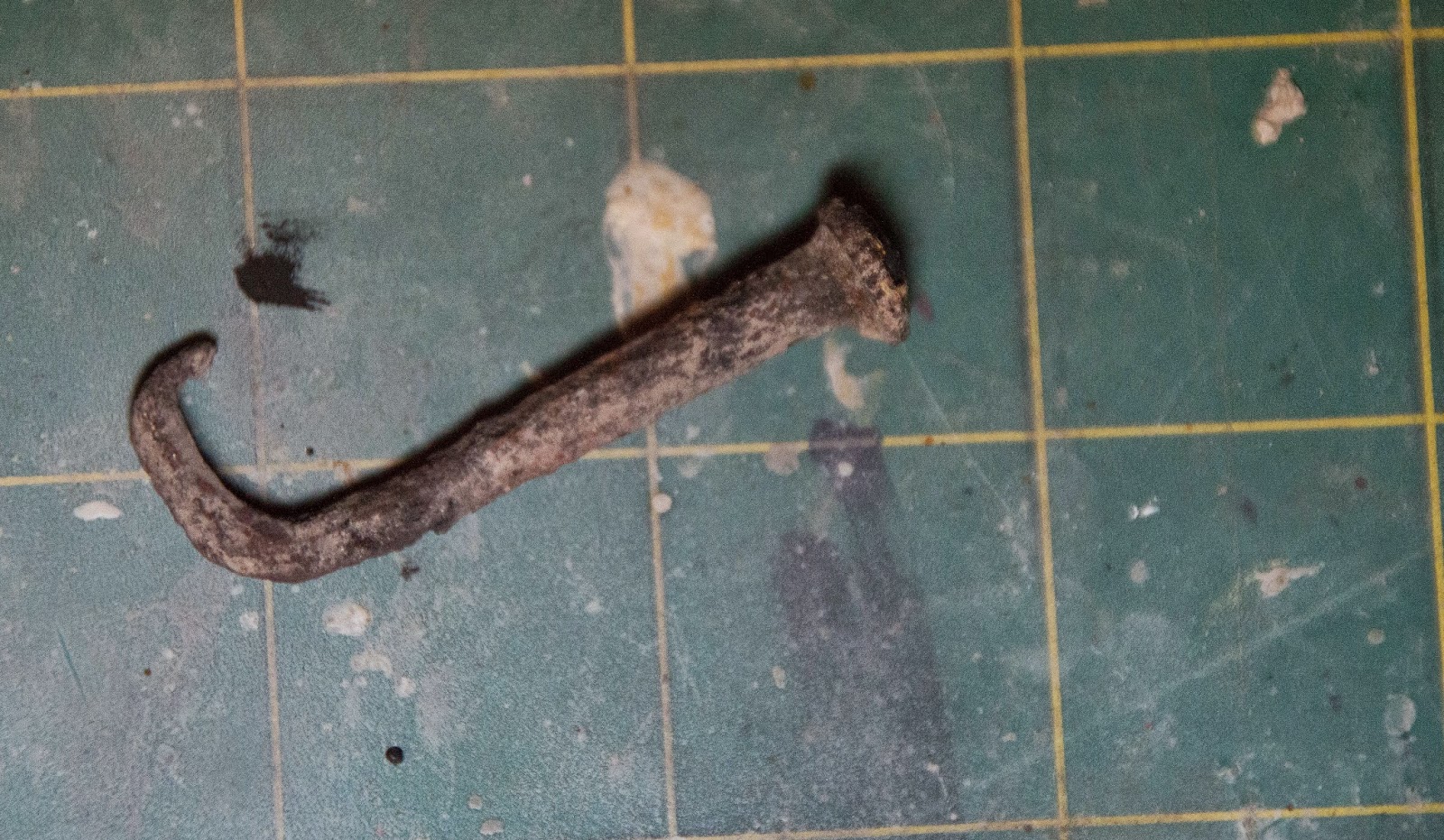 In this corner, from Waukesha, WI, weighing in at 2 oz., Brenda Schweder's Pretty Little Plastic Pigs. 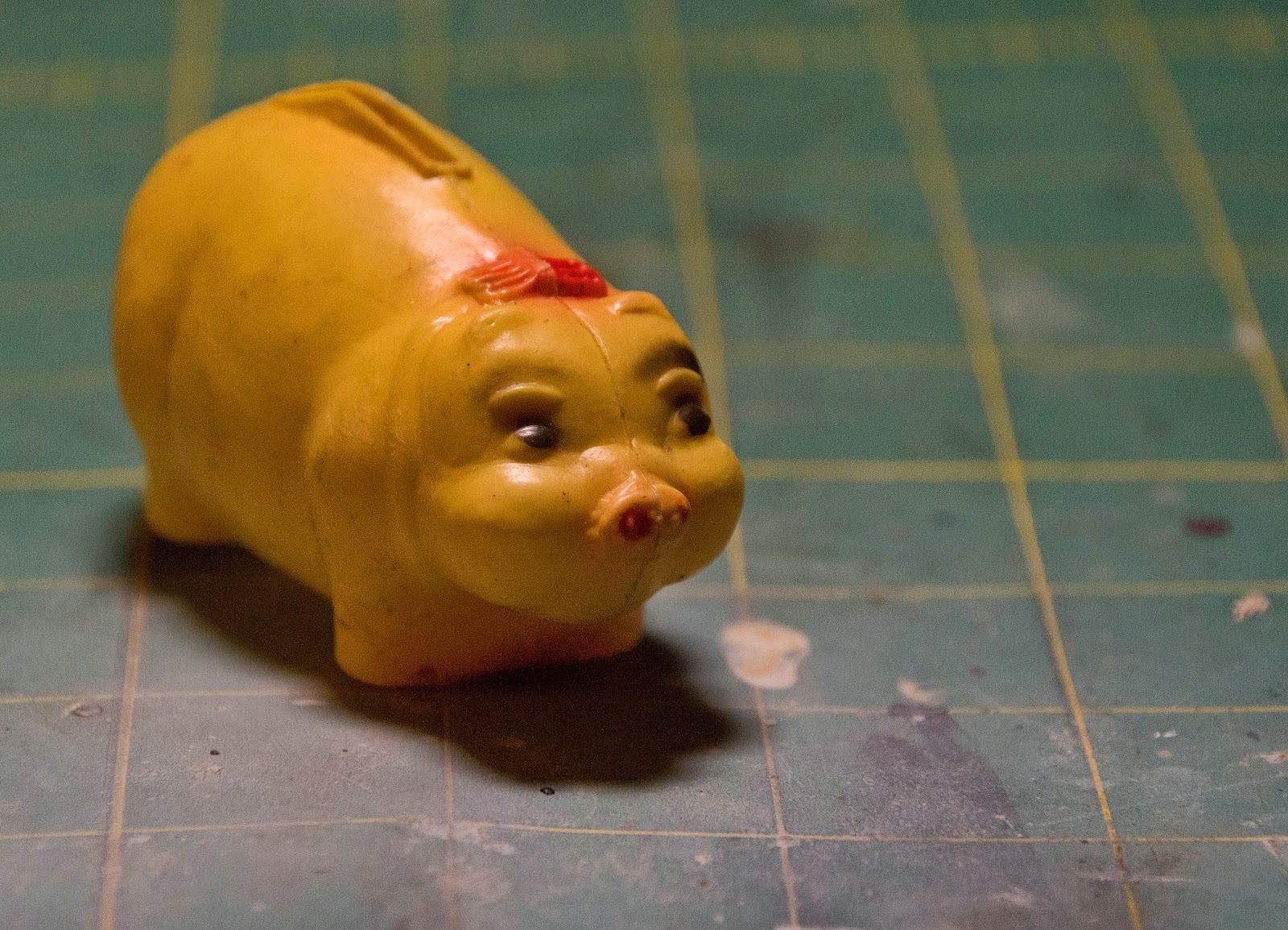 In this corner, from Oak Creek, WI, weighing in at 2 oz., Cris Smith's Pixie Faces. 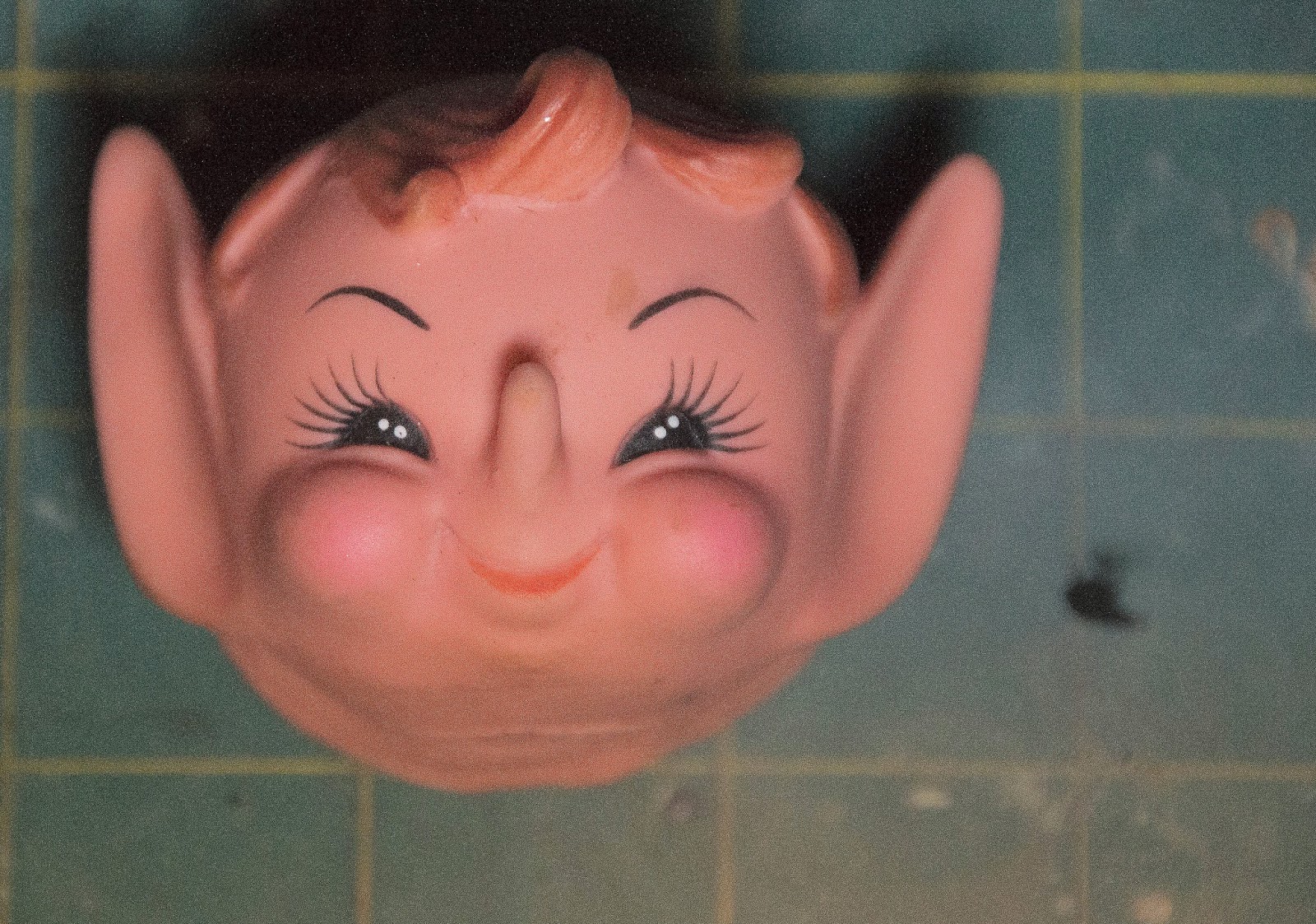 In this corner, from  Iowa City, Iowa, weighing in a 2 pounds(!!), Kelley Clarke's Electrical Piece of Machinery! 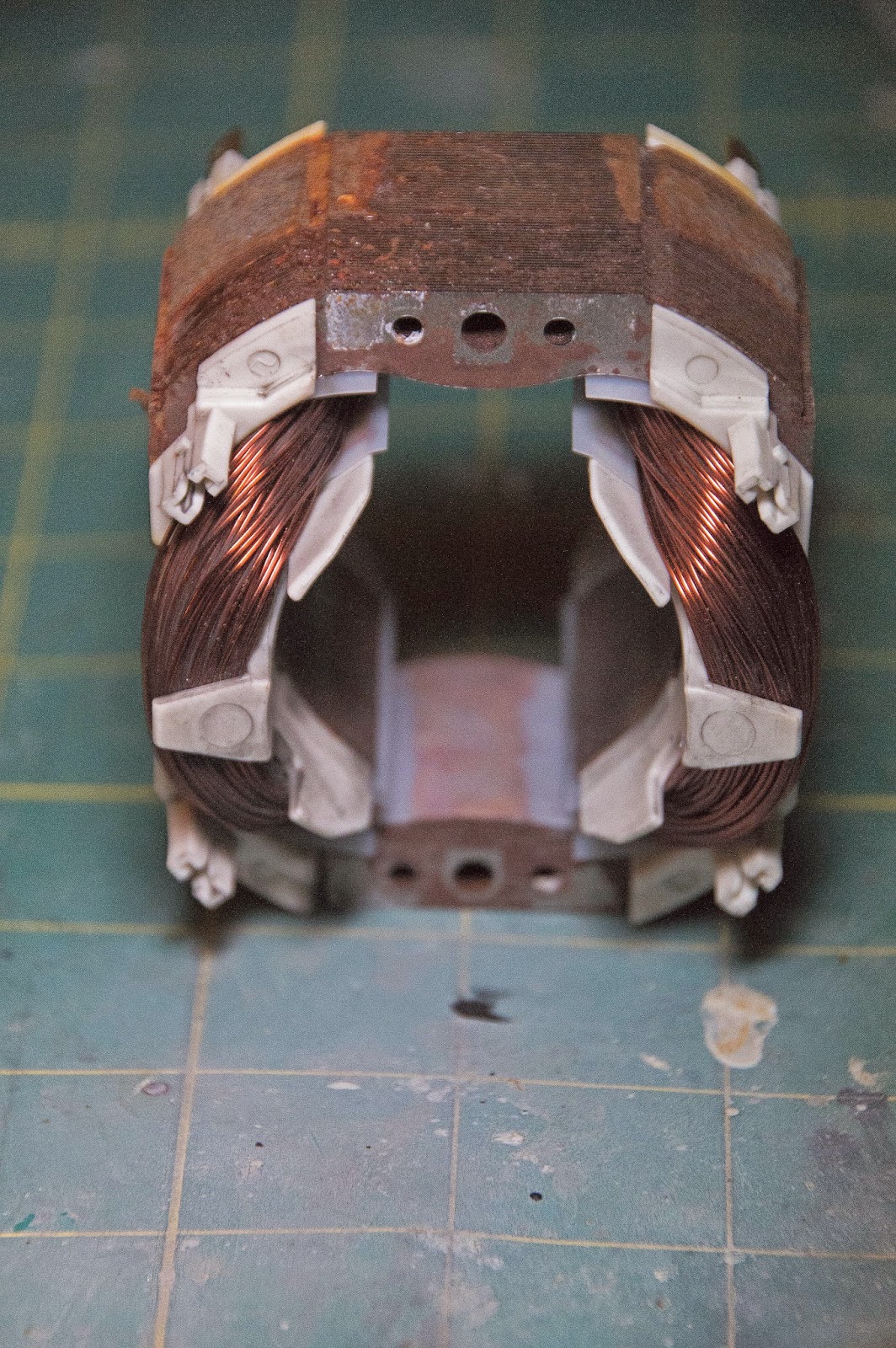 Only Kelley really followed the rules by hacking up one piece.  The rest of us just found four versions of the same thing.

The first task was to try to think through a likely combination of these items.  That did not start out well and then came to a screaming halt.  I have no idea why this stymied me so much but the idea of how to combine these objects was very hard for me.  I kept trying to put the pixie head on the pig through the metal object to know avail.

Then, after months, I decided to get back to this project and finish it.  The key seemed to be introducing other elements to get me from concentrating only on the four objet trouves.  So, I went to my stash of found objects and hauled out this old hunk of wood. 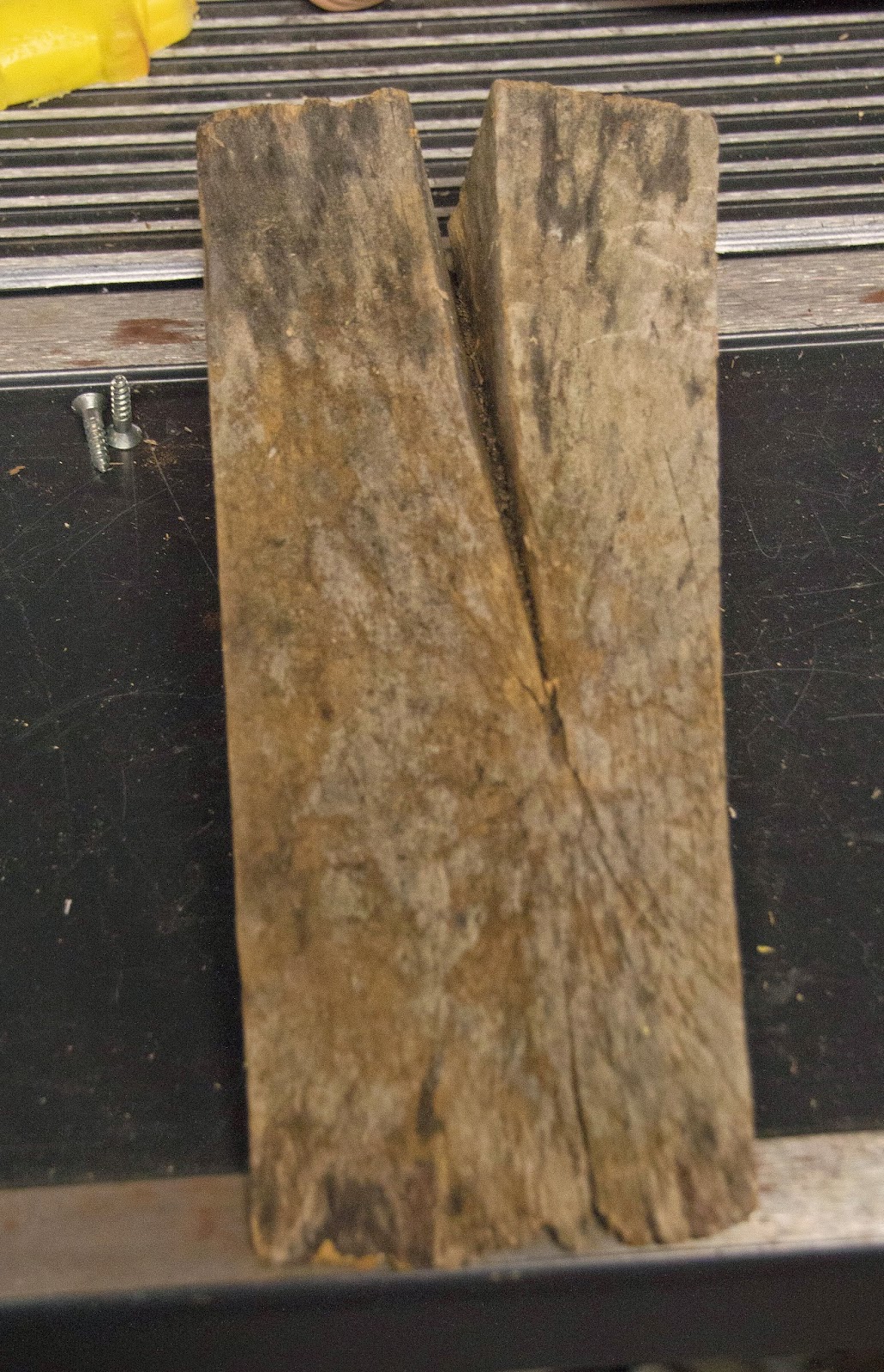 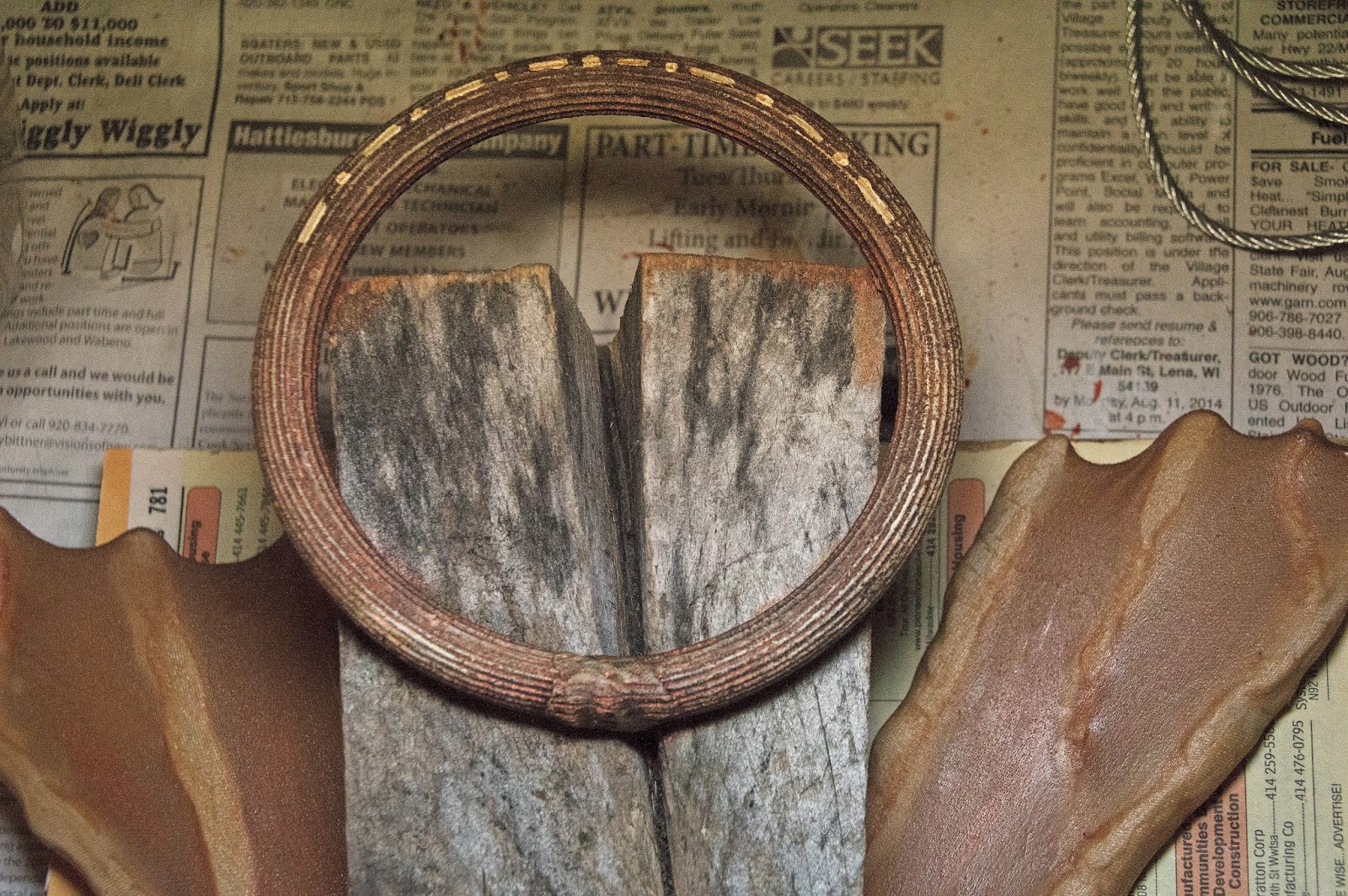 In a Michael deMeng workshop at Valley Ridge Art Studio I learned how to make wings out of steel wire, Apoxie Clay and pantyhose.  I attached these to the back of the wood with a big old bolt.

I made a decision to deal with the pig by hacking it in half.  Then, after sanding, it got a paint job in the style of the Oaxaca, Mexico, alebrijes, or wood carvings. 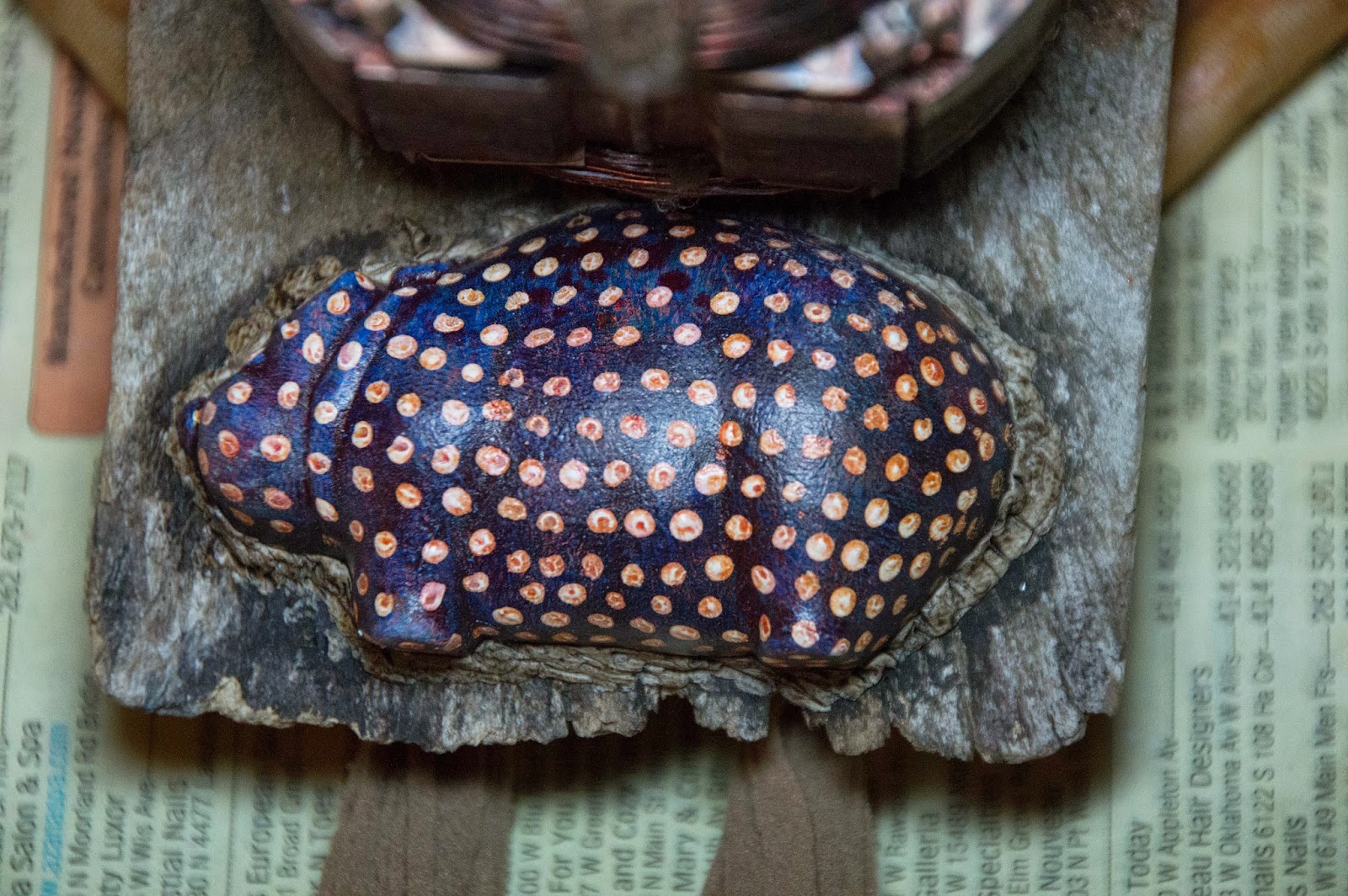 The pig went on the bottom of the board.  I am still not sure why.

Then I stuck the metal piece onto the board with nails and more Apoxie Clay.  This became the platform, or body, for the pixie head.

The pixie head was my undoing.  I tried a number of things with the little beast until my sister suggested that its cherry little cheeks would always make it look like a pixie.  That was it--I decided to alter the pixie from this 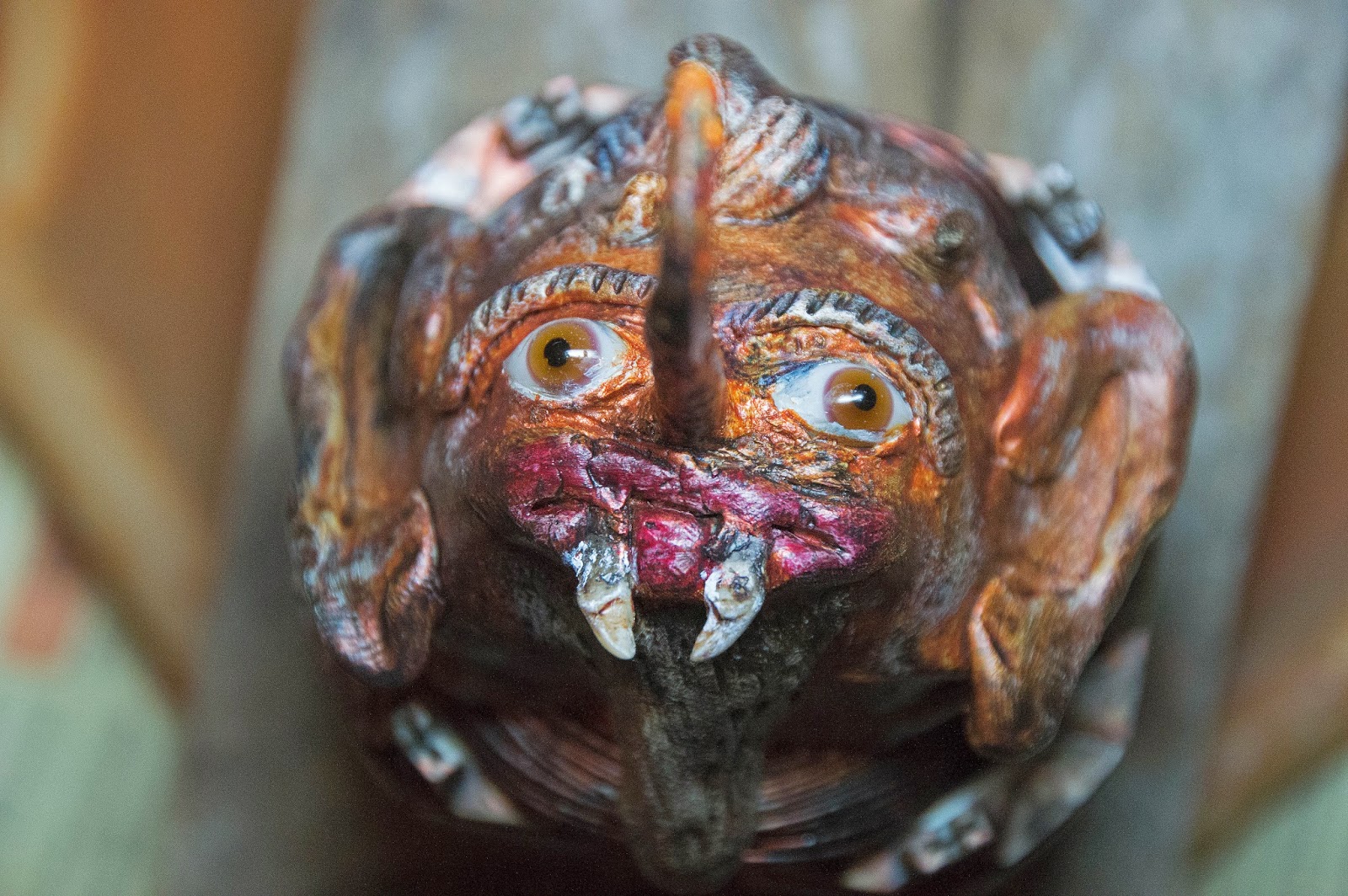 The head went on the body and now the idea of a vampire bat like creature preying on a poor pig came to the forefront.  The teeth are from my friend Robin's weiner dog Woody (who is still alive--he just went to the vet dentist once too often). 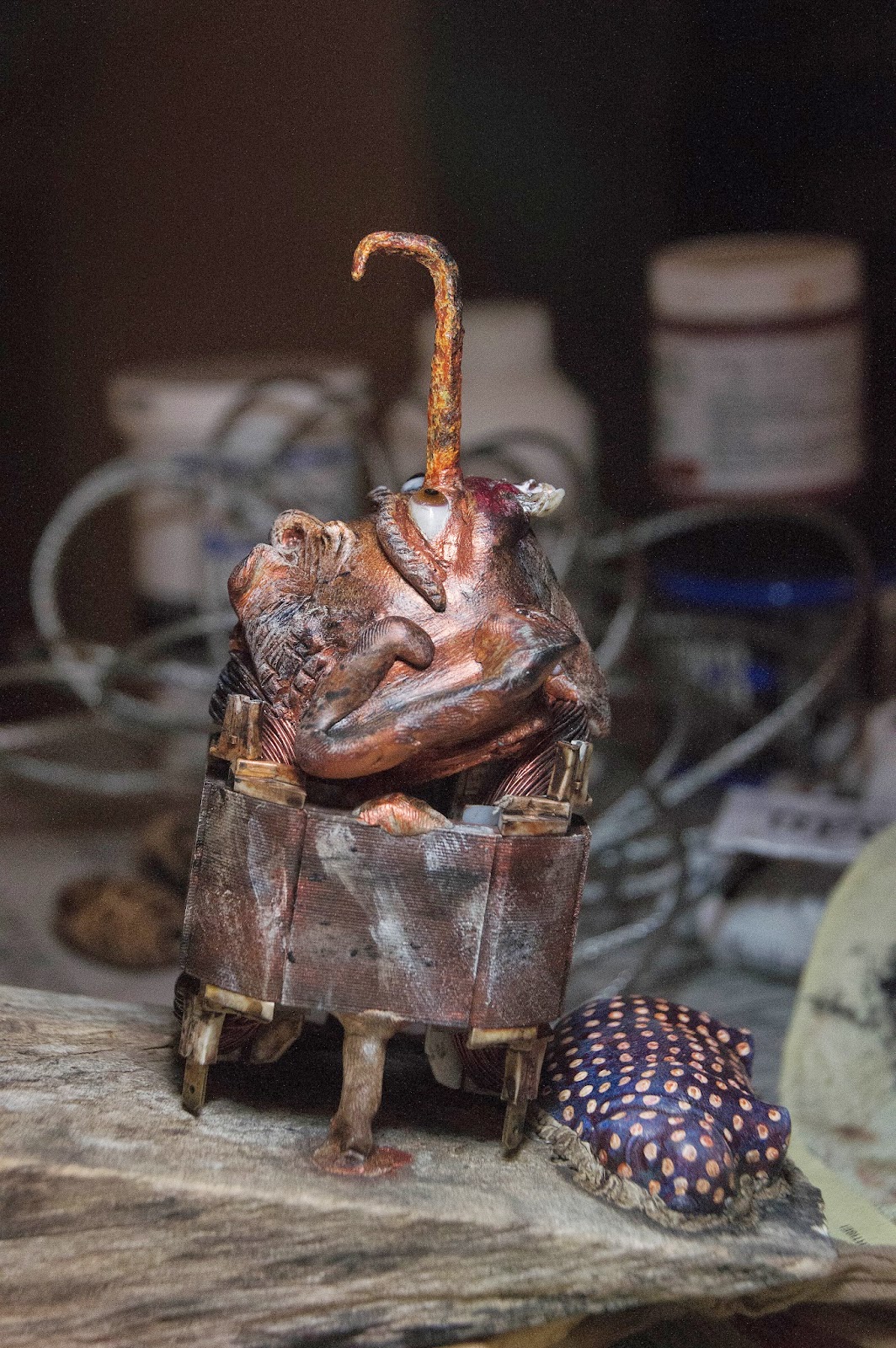 The top of the board was rather boring.  So I added an old buggy wheel and a nail with a round top to create a structure that makes me think of the radar that bats use. 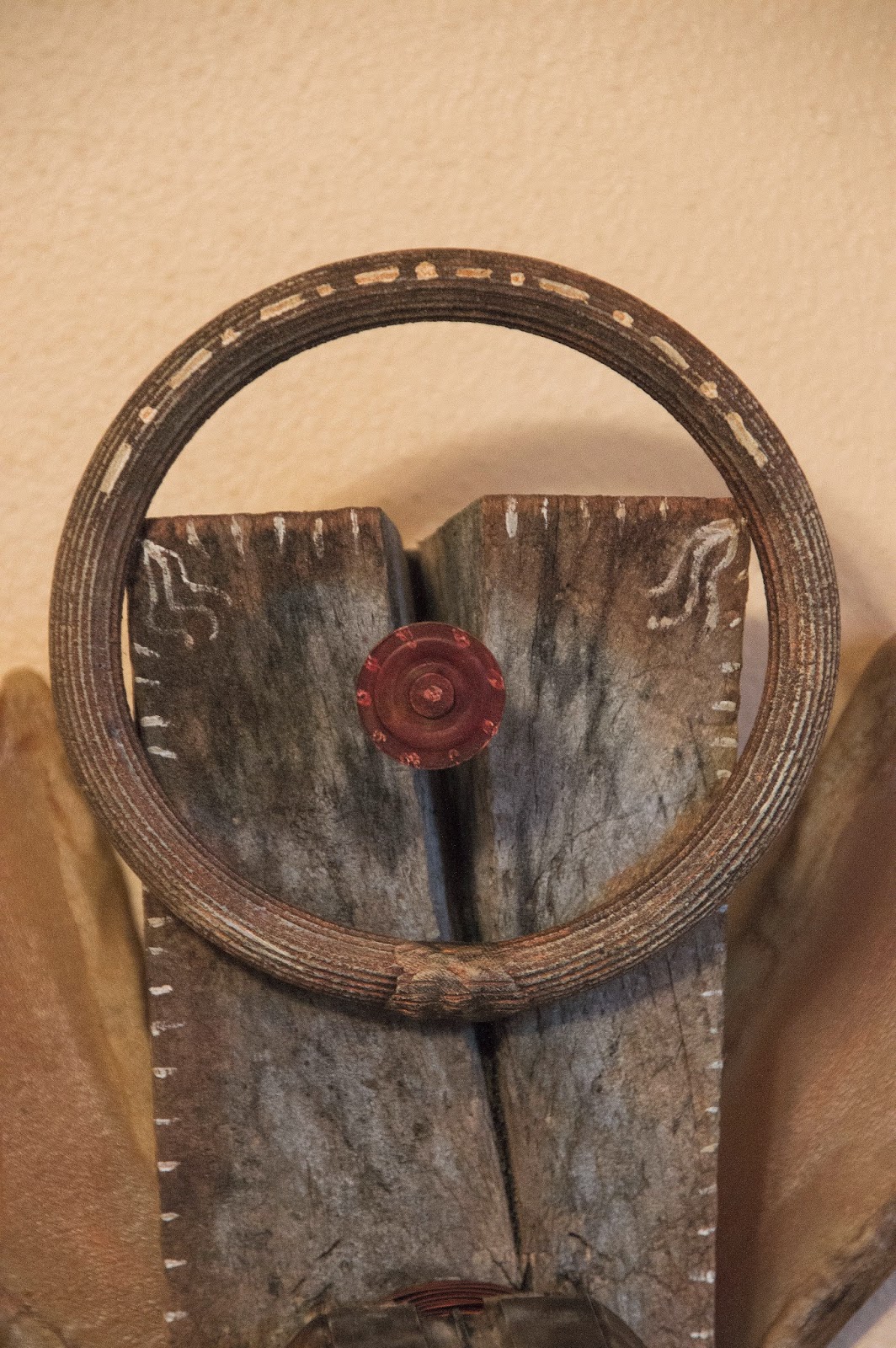 The nylon wings had two dangling remnants that now extended from the bottom of the piece.  They suggested legs to me so I wrapped some rebar wire around a pole to make the legs and then tied them onto the board. 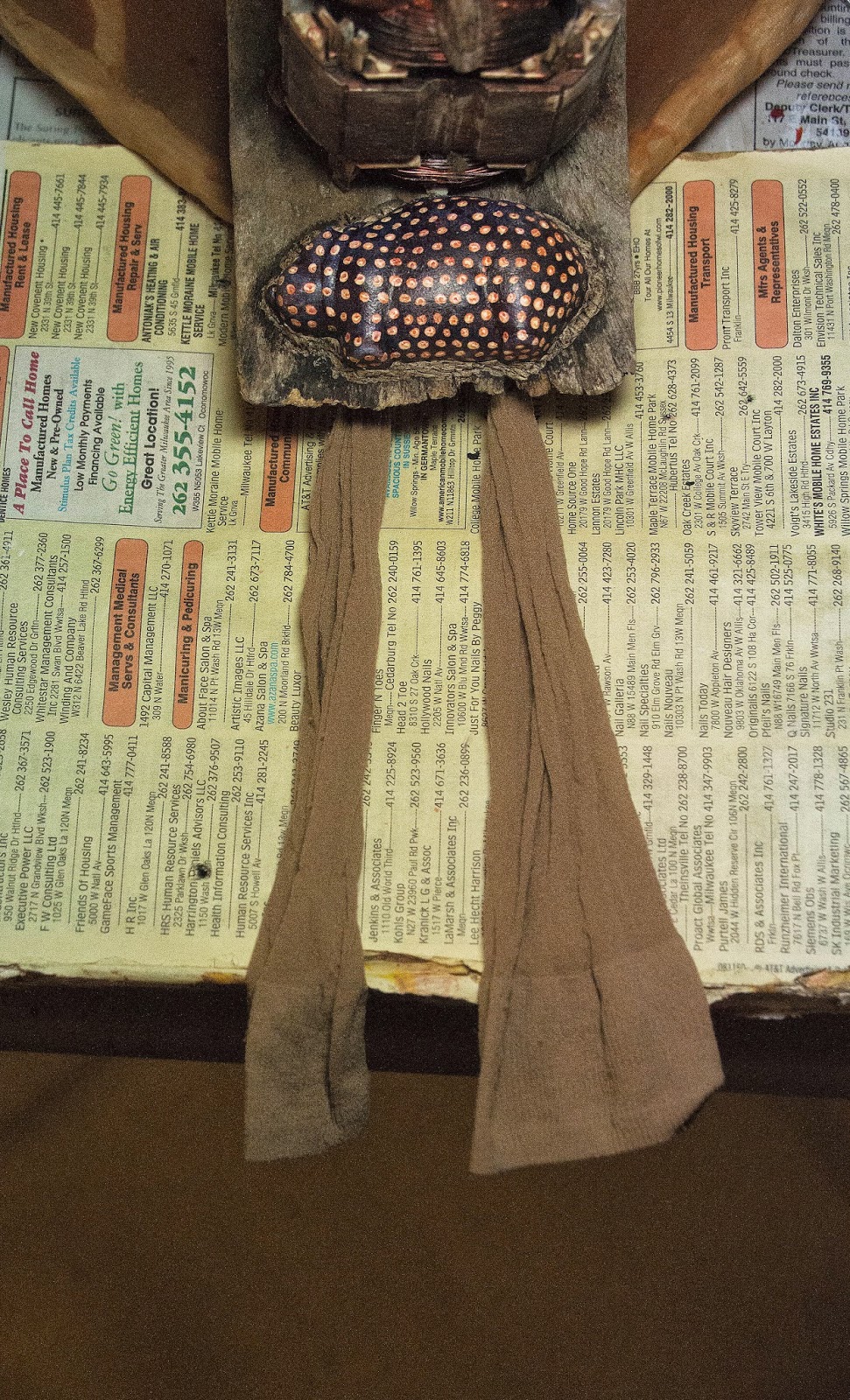 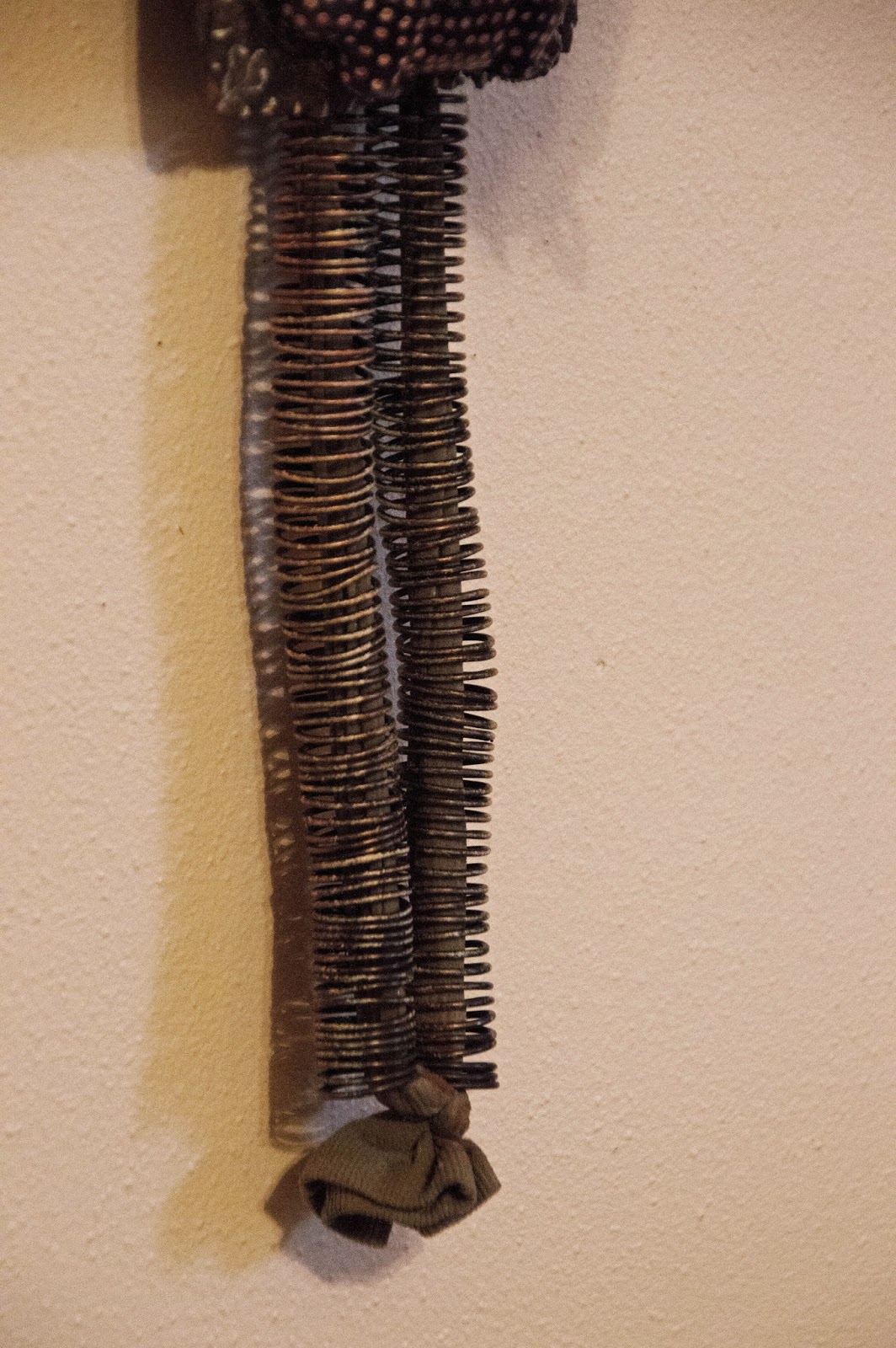 Normally, I am pretty theme orientated and that is what starts my piece.  This challenge worked the opposite for me--sticking all the stuff together led me to this form.  I am not all that happy with this piece I think because of the lack of a theme--for me it leaves it less then successful.  However, considering I had to spend months worrying about it in order to do this, I am happy with the way I finished it off.  So for your viewing enjoyment, here is 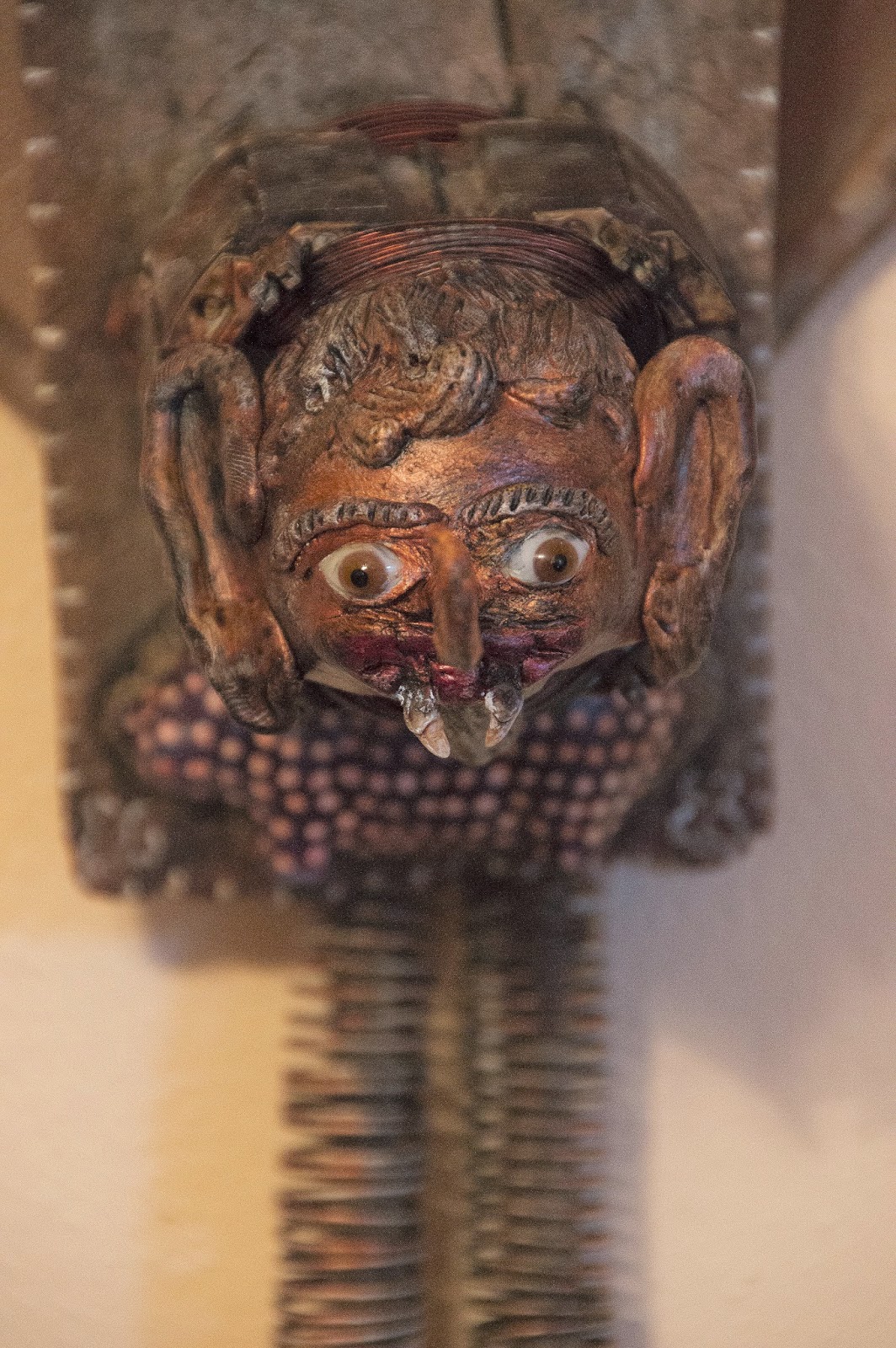 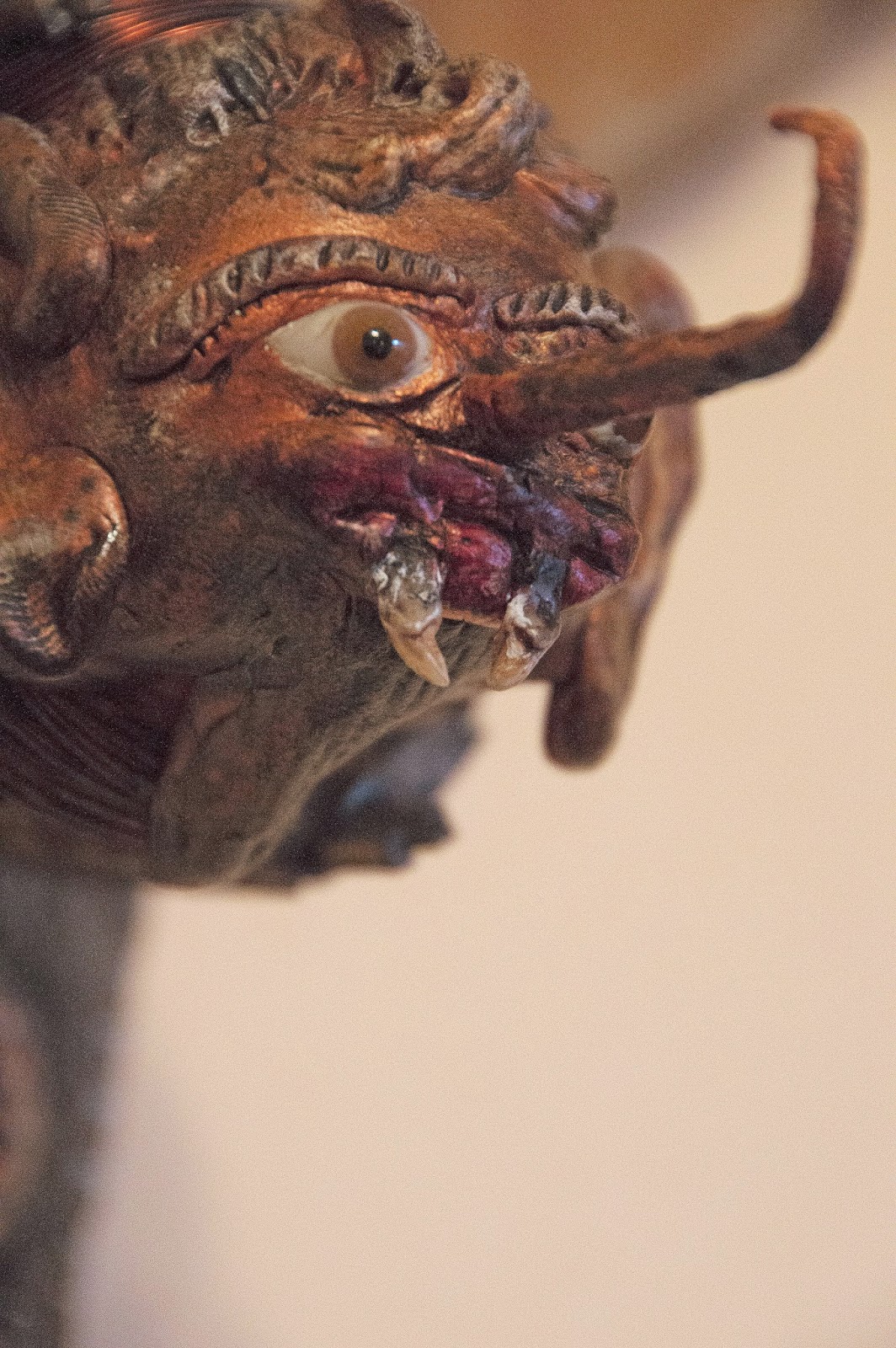 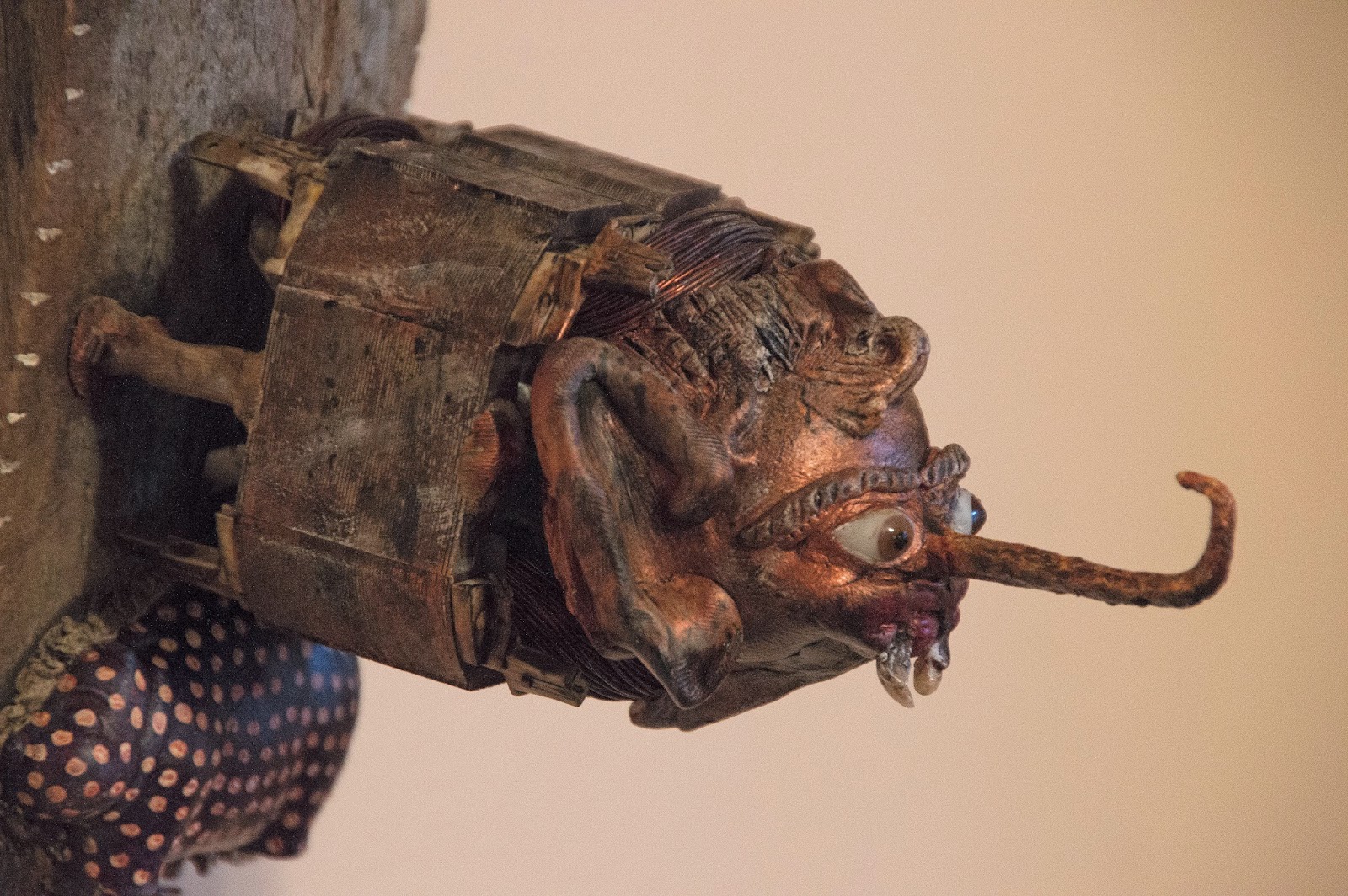 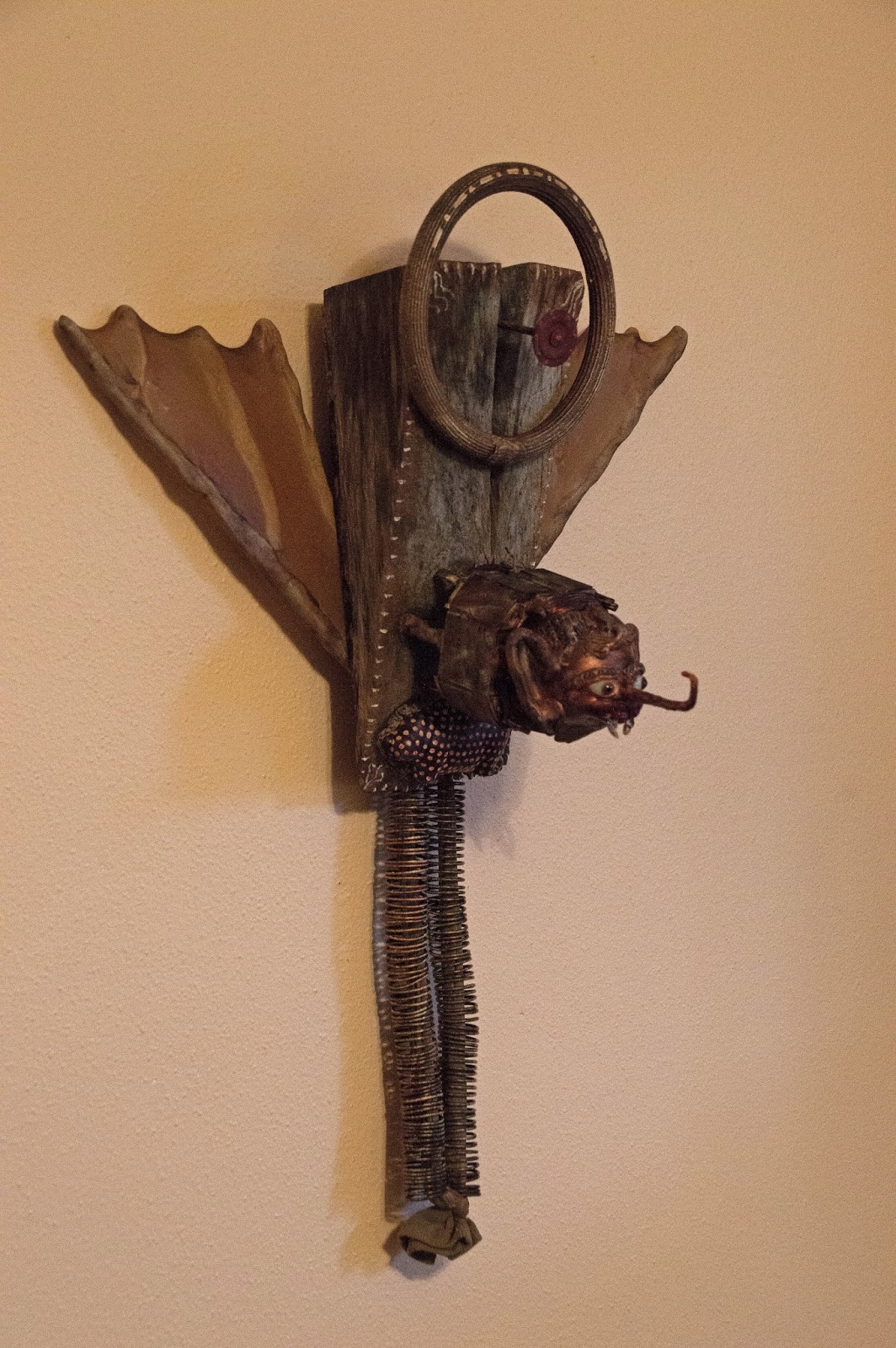 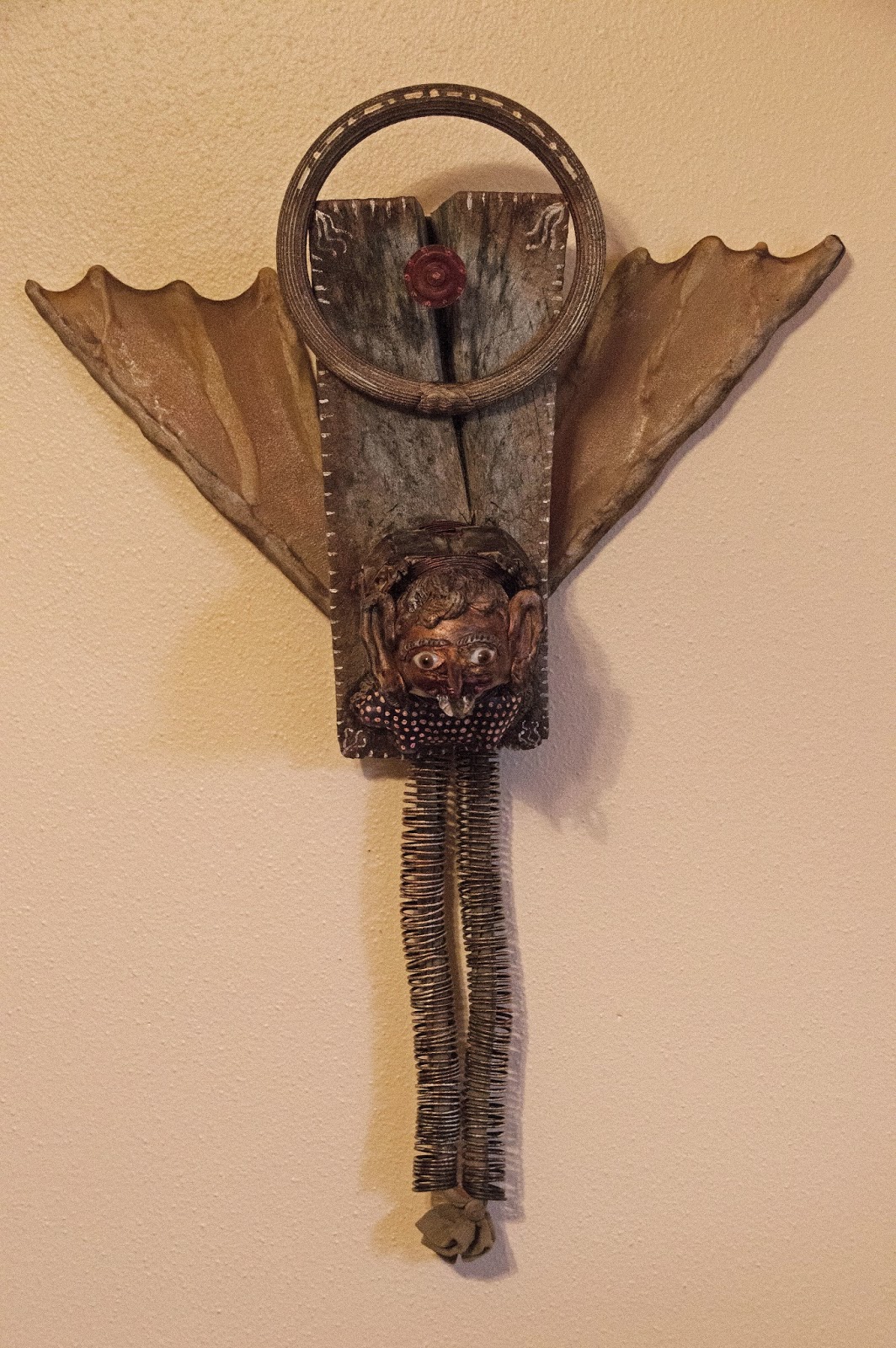