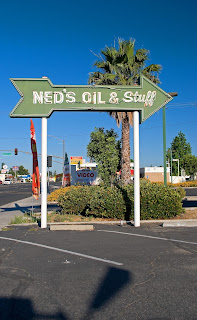 We finally left the teepees of the Wigwam behind this morning as we left Monday for parts east of LA in search of the stuff that dreams are made of.

We once again were forced to breakfast at McDonald's but why not?  We were heading down the road to the first McDonalds.  This was the location where two brothers named Maurice and Richard McDonald opened their first restaurant.  Later the chain would open its first franchise in Chicago but here is the true first location. 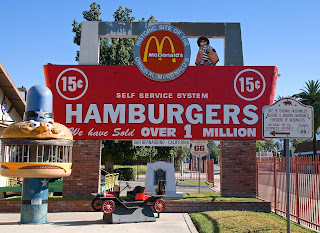 And because it is Hollywood, you never know what big stars you might run into when you are out and about. 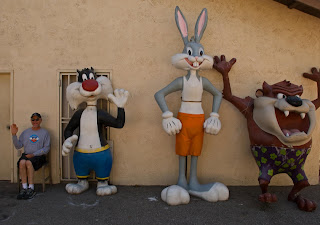 Proceeding north on Cajon Blvd. out of San Bernadino (after getting a little lost because of some freeway construction) we stumbled upon an old motel where two rather interesting men were having a rummage sale / flea market / junk dealership. 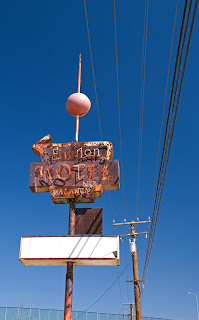 One guy was selling overstock crap but the toothless guy had a huge area in front of the old motel that was full of junk.  When I tried to walk into the back part of the lot the guy told me all that junk was off limits because he had some "projects" he was working on.  I cannot even begin to imagine what those projects might be but think either The Bates Motel or possible Ed Gein.  Anyway, I bought a rusty basketball hoop (that is cooler than it sounds), a skeet throwing tool, and an old tool on an old piece of wood, all for $7.
When I got back to the van, Denice was being chatted up by junker guy number 2 who was regaling her with a stories about getting a speeding ticket in Wisconsin in the winter, mentoring folks who are in need and various other topics.  We listened to this guy's stories for about twenty minutes before we could politely move on.  This is going to be common on the Route as everyone seems to want to talk and tell their tales on The Mother Road.
Then it was into Devore where a theme for the rest of this trip began to develop.  Following the true Route 66, the original roads as best we can, means we are driving on all the old, now by-passed, roads.  They are filled with by-passed businesses, abandoned possessions and the waste of an over developed country who casts off even its landscape. We began to call this the Poverty Tour of America. 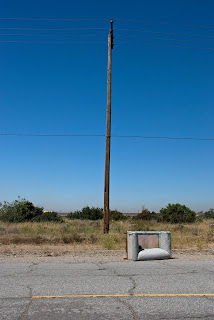 However, if we are determined enough, we can find history where we need it to be.  There is, for instance, a sample of the original Route 66, paved well before 1926. This is possibly the only example of this type of Route 66 pavement left, according to the guidebooks.
We are pretty sure that most tourists and the big guided groups like those Brits and Aussies at the pier stay on the big highways like 40.  We are determined to stay off those highways as much as possible.
So that means that you might be a little depressed by what you see in the city of Devore 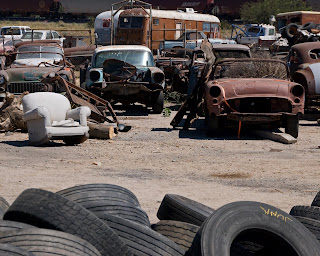 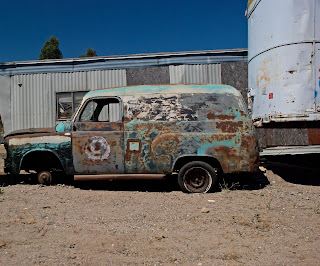 but you make up for it by driving into the toner Devore Heights. 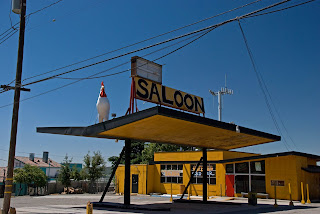 To find this place we had to head down a road where old Route 66 dead ends, then reverse back to a newer version of the Route (or in some cases a completely different newer road) in order to get through.

After going through Cosy Dell we hit Cajon where I spotted a yard art place on the side of the highway that looked like it had really cool stuff out for sale called Main Street Collectibles. I talked with the owner and he told me that he can make any fiberglass anyone would want from any photograph. 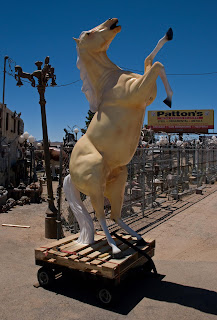 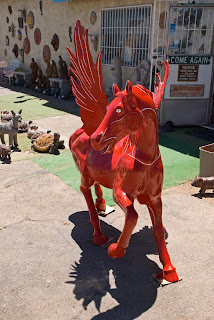 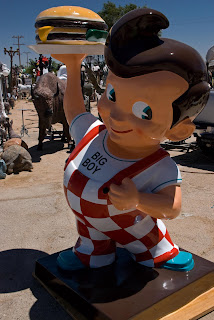 In case you would want one, the Big Boy sells for $795 plus tax and shipping. The good news was that instead of using this guy's business as a museum, he had some cool old stuff around for sale as well so I could buy something.  So, to pay for the photography I was doing, I went junkin’ and bought two ice picks, a carved wooden Mexican mask and a piece of cool rusty iron with some numbers on it. 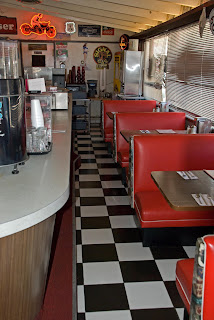 For lunch today it was the Canjon Summit Inn which features ostrich from a nearby ostrich farm and I can testify that it if fine on a bun.  And, obviously, a great '50s themed cafe. 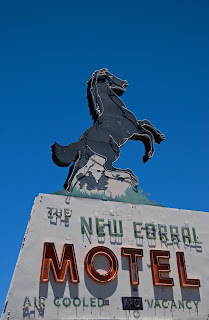 Next it was on the road to Victorville.  Denice and I visited the California Route 66 Museum where Denice was fined for touching the artifacts. 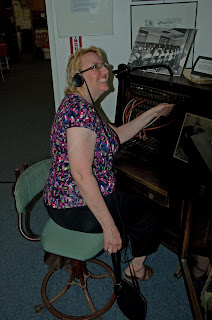 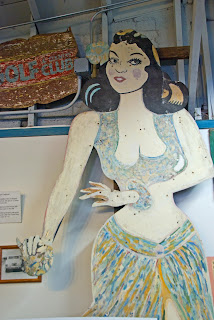 This placed rescued the folk art stuff from the Hulaville Museum including this 15 foot tall hula girl.
Next we crossed the Mojave River and into Oro Grande where to my great surprise, in a very unlikely place, we found two antique stores sitting on the side of the old Route 66. 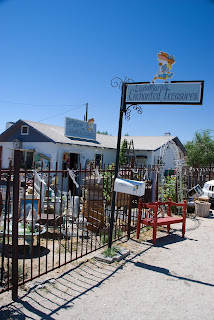 The first was Linda Marie's Enchanted Treasures which was a great place to stop and visit.  I bought another skeet throwing device (was this the croquet of Route 66?), some old wood spindles, and a candle holder with faces for around $15.  Linda Marie is a wonderful hostess, seeming slightly lost and maybe too upscale for this area but her place is wonderful as you can walk outside amongst her wares and see the old motel over the fence behind her shop.  She took our picture for her website as the famous artist and author visit.  OK, that was a little bit of an ego boost.
The Route 66 Antique Station was right next store and is a typical antique mall like you would find anywhere in America.  I managed to buy two wood wall sconces, an oil strainer, and a little frame for $30. 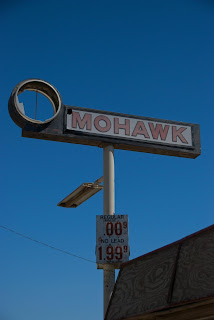 Through Bryman and into Helendale, where we tried to fill up here because of the cheap gas prices. Helendale also offered up my first opportunity to wander amongst someone's history.  I am always amazed as I walk through these sites especially when I find things like this scattered crockery.  It is eerie. 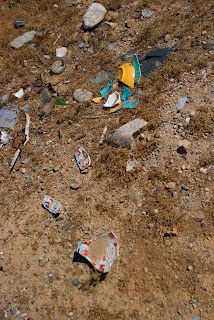 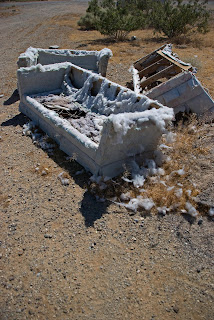 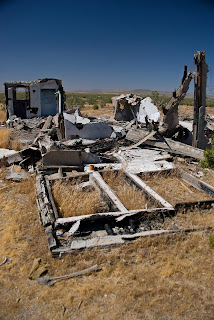 Then it was on to Hodge where we found some another ruin.  As we got further down the road, most of the ruins are well fenced off from scavengers like me.  Also, many are covered with graffiti. 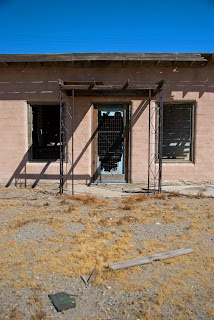 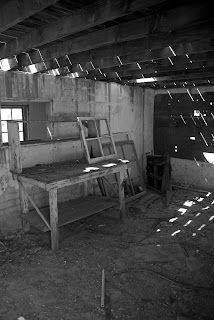 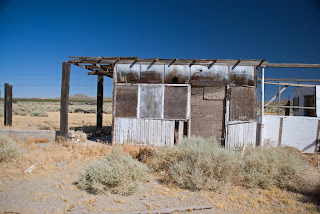 The poverty of these locations does create amazing beauty.  The embarrassing portion of this though is that occasionally we pull up to an abandoned ruin only to reveal that this is actually someone's home.  We are gaining a sensibility for survival out here and an education on the economic state of many of our fellow Americans.

Not lost on me is the beauty of the desert despite the fact that it is over 100 degrees out here.  While this challenges the plants, it also creates some wondrous beauty. 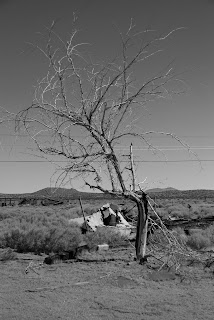 From Lenwood we made it to Barstow and choose this as our destination for the night by checking into a vintage place called the Route 66 Motel.  When we checked in, we met the female portion of the husband and wife who own this place.  Besides telling us all about everything her husband had accomplished as an Indian businessman making it in America since 1962, she also showed us original photos from the town that showed the buildings we were going to sleep in were originals in the town of Barstow.  She also gave us a lecture on breathing and following the teachings of Swami Ran Dev which we have yet to try.  All of this exchange was done with a backdrop of Betty Boop.  Here is her domain at the motel where Denice and I spent twenty charming minutes with a unique individual. 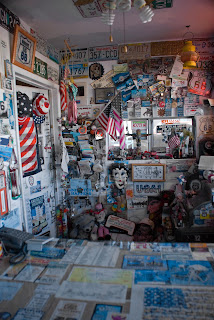 Dinner tonight was at Jenny’s Steak and Mexican Restaurant, a local restaurant--not a chain.  While this was a goal for the whole trip, it was not always possible to find local charm and food.  After dinner we did the town for neon. 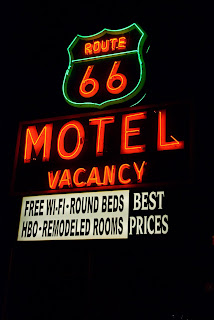 View all the photographs from this trip at http://www.flickr.com/photos/gniebuhr/
Posted by gary warren niebuhr at 7:44 AM