Today is Tuesday, June 28, and it is day six of The Poverty Tour of America.  We leave Barstow today at 7:00 a.m. by backtracking to Lenwood to try to find an abandoned drive-in that supposedly is there.  This site must be long gone as we could not find it.  However we did see one of our first wild life sightings: a coyote running across and along the highway with a jack rabbit in his mouth. 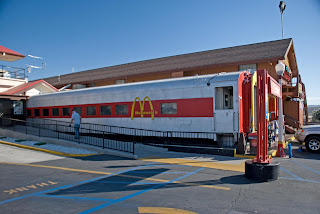 Back into Barstow and it is McDonald's again.  This time we are eating in the Barstow Station McDonald's, a restaurant made from old railroad passenger cars.

Off down Route 66 to Daggett where we discovered Mugwumps, an old stop that had been converted to a photocopier store. When the photocopier place went out of business, the guy walked away leaving all the machines sitting outside the old garage.  Weird.  Even weirder, he used an old mail truck for his business and left his stuff abandoned in that as well. 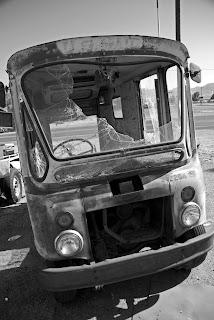 Even Weirdest:  Through the power of the Internet, it turns out I have this one all wrong.  I hear from the owner of the business and here is the real story:

First off I am the owner of Mugwumps....
1. We started off by printing Mugs
2. We were "Wumping out MUGS" thus the name "Mugwumps"
3. We never were a photocopy business. We did screen printing,offset printing, embroidery, Ad Specialties, and of course mugs. Copies was a sideline.
4. The 1963 Jeep FJ-3 was Never used for the business. It was and is an ongoing project vehicle just for fun.
5. The business was ongoing for over 30 years.  We went out of business because a bunch of Druggies broke in and destroyed the equipment.
(BTW yes they went to Jail
YOU DON'T SCREW WITH A RETIRED MARINE AND GET AWAY WITH IT )
6. None of "stuff" was abandoned I live in the next block.

And one more Route 66 legend is set straight.  Thanks for the update from Mugwumps. 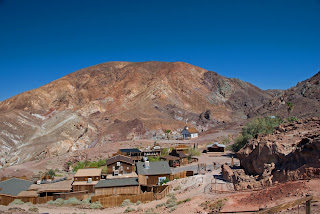 Off we went from Daggett to the Calico Ghost Town.  One odd thing is that our GPS showed us motoring along the Ghost Town Rd. but (WHOO WHOO) it had no image of the road.  The Calico Ghost Town was a silver mining camp that once held 1,200 people.  Today about 1/3 of the buildings are the originals but all them appear to be full of stuff to sell to tourists which should be no surprise considering this was once a Knotts Berry Farm operation.  We did do two cool things:  we toured Maggie's Mine and took a ride around on a narrow gauge mining train. It was over 100 degrees out there and to prove it Denice took this picture of me. Driving through town to get back onto Route 66, we spotted the Daggett Pioneer Cemetery. 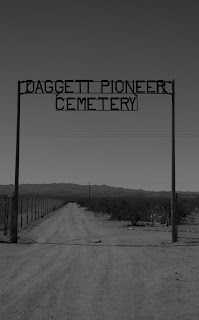 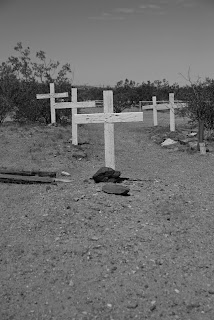 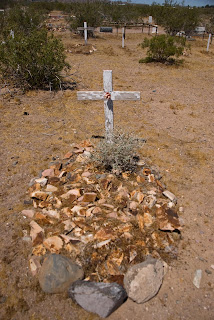 Through Minneola and into Newberry Springs found us having lunch at the Bagdad Cafe.  This was the site of the cult movie of the same name of which the workers at the cafe seemed to be very proud.  We checked out the memorabilia and then decided to split a buffalo burger.  While we waited about 45 minutes for our burger, despite being the only people in the cafe, we were entertained by the conversation of the men who staffed the cafe.  Let's put it this way:  think The Big Lebowski.  After we re-ordered our buffalo burger, we finally got our food.  When lunch was done, after being warned that the road we were about to drive down was "a car eater," one of the guys also warned us about getting bit by a snake like he was yesterday.  That (or massive drug use) may explain a lot. 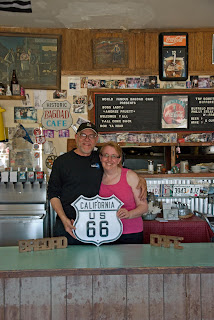 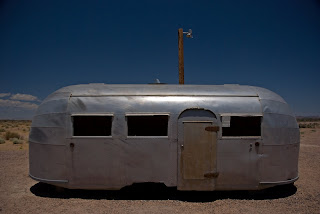 This is the actual Airstreamer used in the movie.  I am going to have to watch the movie and see it.

We then headed down the car eating road to Ludlow.  The road turned out to be not as rough as advertised but it did offer incredible beauty. 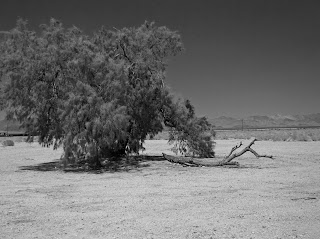 The next stretch of the dirt road led to Lavic which shows the effects of the lava flows from the Pisgah Crater--a scene that reminded both of us of our trips to Hawaii's Big Island.  The road continues to be rough from Ludlow through Klondike, Siberia, Bagdad and into Amboy.  The Amboy Crater is another volcano in this area whose effect can be seen along the road.  The town of Amboy was sold on Ebay to Albert Okura, the owner of Juan Pollo Restaurants, who was to restore the city.  Our opinion is that he has failed to carry out the plan.  Sad.

However, Roy's Cafe is open although we did not go in.  I did use the restrooms and had to run the gauntlet of this horse in order to pee. 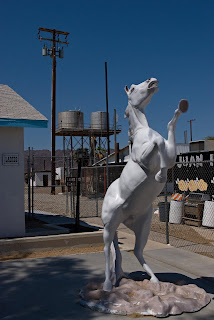 Along this road, people arrange the rocks into words and phrases, another reminder of the Big Island.  Another local tradition is to the Shoe Tree, where people hang their own shoes.  Either that or the Highway Department has found a use for all those shoes I always see lying in the road.


On we went through Chambles, Cadiz, and Summit.  On the road was Cadiz Summit, where a former site of a complex where just the graffiti covered walls are left. I am fascinated by old ruins and this station was no exception.  Covered with graffiti, it still held a spell over me. 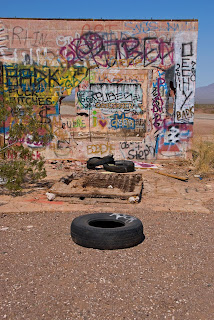 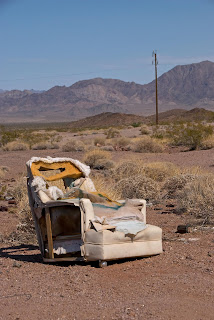 Across the street was this chair, sitting there as if someone would use it to watch the next sunset.  The whole site was covered with rusty stuff and proved great pickin’.

On a hill above the ruin I found this cross overlooking the landscape.  Who knows the story? 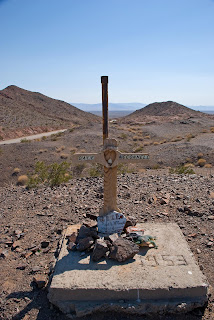 Danby, Essex, Fenner, Goffs and Arrowhead Junctionwere all towns on the pre-1931 Route 66 we decided to travel. In Needles, we saw the El Garces, an old Harvey House hotel, now a shell with the promise of renovation.  Like all the towns along the route, Needles was not without its great signs. 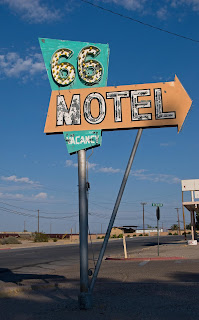 We took a jaunt out to Parker Junction to see where the old route crossed into Arizona at the Colorado River.  A location to eat and sleep became a priority at this point so we decided to return to Needles and checked into an old Route 66 motel called the Best.  After paying $25 for our room and then actually seeing it, we backed right out and went to look for another place to sleep.  Perhaps the sign prohibiting any drug dealing in the room should have been our clue.  Suddenly, the town's name of Needles began to mean more than it had before.

Checking in at a Days Inn ended our odyssey until we went to a Dennys (I know--Dennys!!!!) for dinner only to discover it had no air conditioning.  At this time of night, it was still over 100 degrees out there and we wilted through an average meal.  Finding a cool place to stay and eat in each of these depressed by-passed town is going to be a continuing problem on the road.

See all the photos from our trip at http://www.flickr.com/photos/gniebuhr
Posted by gary warren niebuhr at 9:47 PM