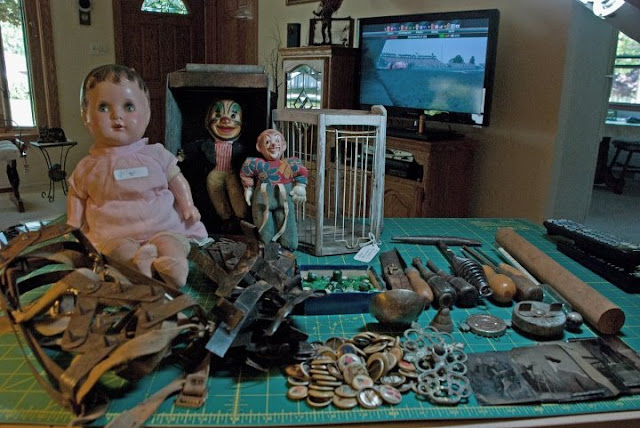 I went to the Cedarburg Maxwell Street Days recently and scored a big haul.  Denice found the most unique items:  she spotted a pair of cleat attachments for walking on ice in a pair of shoes.  Not only is the metal cool but the old worn straps really add something to the atmosphere.  They are sitting on the left in front of the vintage doll I also bought.

Despite having a basement full of stuff to make assemblage from, I decided to work on this new stuff right away.  By playing around with the doll and the ice skids, the project came together immediately.  Ice cleats on the baby and that is that. 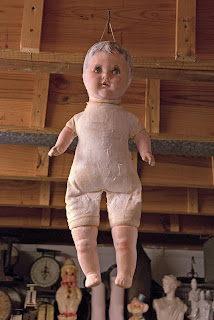 I decided to first try stiffening the doll up with dap but that did not get me to where I wanted to be although hanging the doll in the basement rafters was pretty cool. 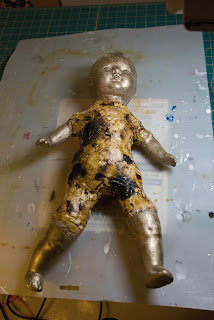 Next up was the tricky burnt flesh trick taught by Michael de Meng.  I decided to see what would happen if I combined that with the burnt shellac texturing technique also taught by Michael.  So essentially, it was a lot of fire on the poor little dolly. 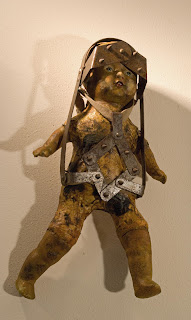 Before trying to work on the cleats, I came to realization that sometimes it is just best to leave well enough alone and that is what I did. 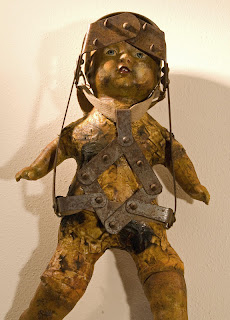 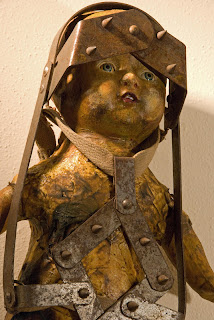 A little wire around the neck so it can hang on the wall, and I was done.  So, $9 worth of stuff and 5 hours of work later and we have, A BIND.
Posted by gary warren niebuhr at 4:45 AM