Not a stretch for me. 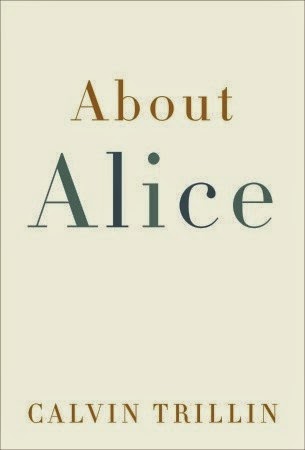 The starting point for this project is a book called About Alice by Calvin Trillin.

This piece is about abortion.  So at this point, if this bothers you (and I fully understand if it does) look away.

Part of my theme comes from the alliteration:  About, Alice, Abortion.  My works are always about the story so here is an opportunity to write your own story.  One way to look at this piece is that Alice died in a botched abortion and so did her child.  That is the horror of abortion.  Or, you could be upset that the abortion was botched.  That is the horror of abortion when it is not legalized.  Because of the religious symbols, you could argue that Alice, because of the addition of have an abortion, she is not worthy of salvation.  But if you knew she was a victim of rape, would that change your opinion?

What if my vision of the story does not even reach the viewer?  I think it is possible to see this as a piece just about childbirth.  Did Alice die in childbirth?  Did the child survive?

Ultimately, it is not my job to explain all this to the viewer.  It is the viewer's job to take the elements I present and decide to themselves.  I think anyone who looks at this piece will be both disturbed and moved.  That is the goal of this piece:  engagement.

Whew!  Enough of the theme already, let's get to the construction.

After attaching the book together and getting the hanging hardware on the back, I found a cabinet card that would work for an image of Alice.  Then it was time to do one of my favorite painting techniques:  ghostly glow as taught by Michael deMeng. 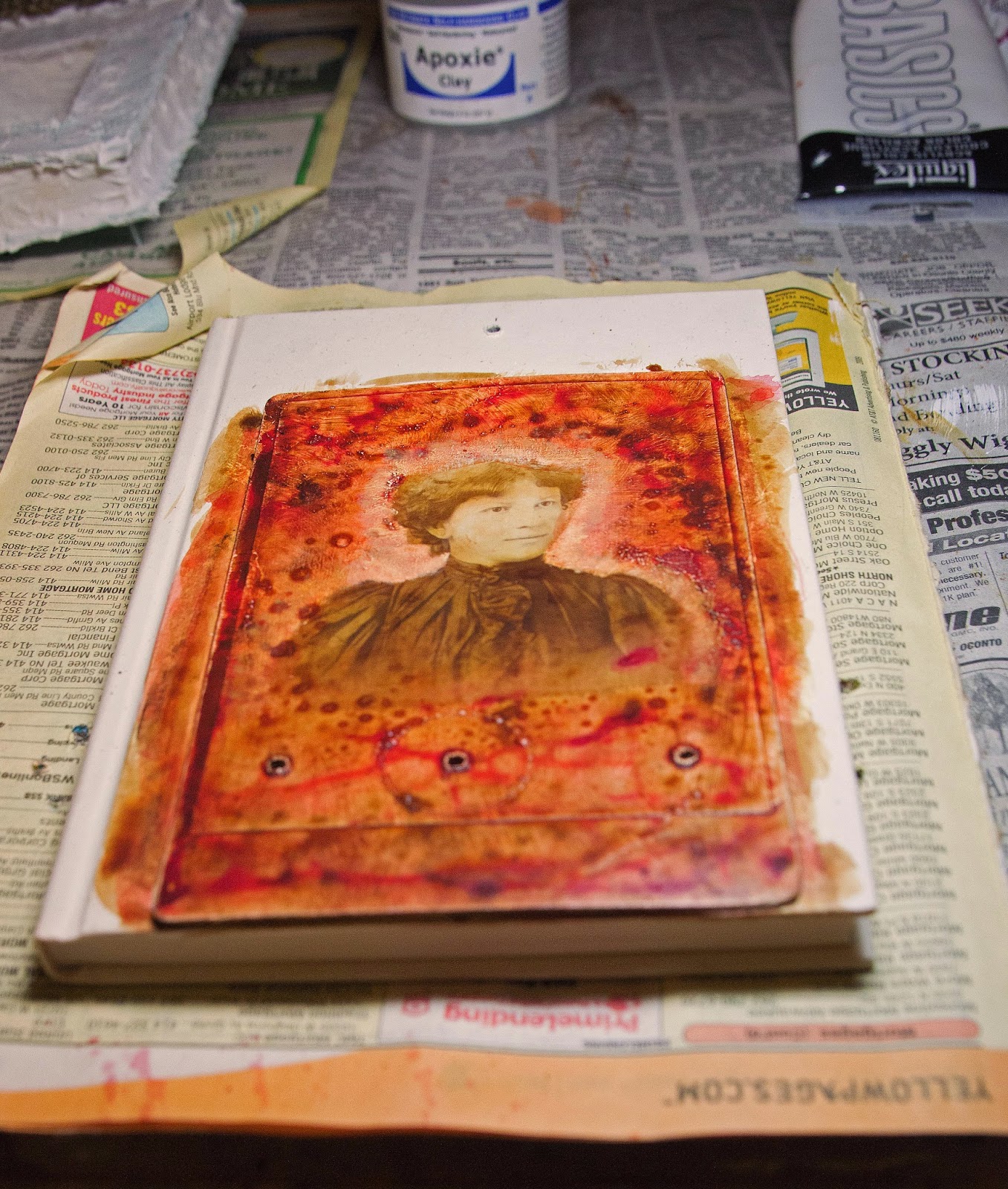 Once the image was painted, I glued it onto the book cover.  Over the image I wanted to put something like would look "female."  I think the metal piece I found does the job.  Then I found the womb I needed and to it I added the lost soul of the child.  I also added a decorative piece to the top for aesthetic value. 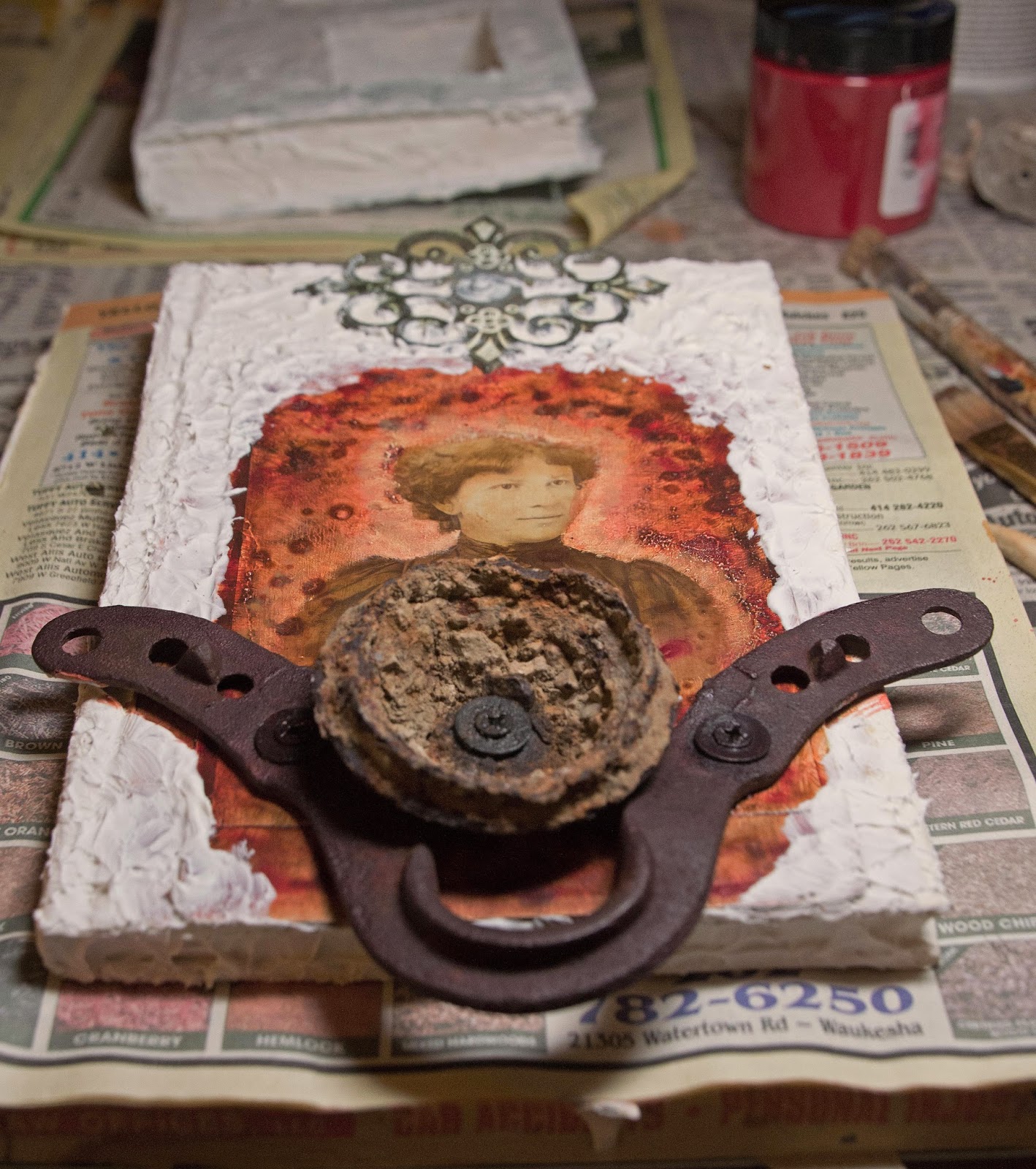 Then it was time to texture the book so it would be ready to paint. 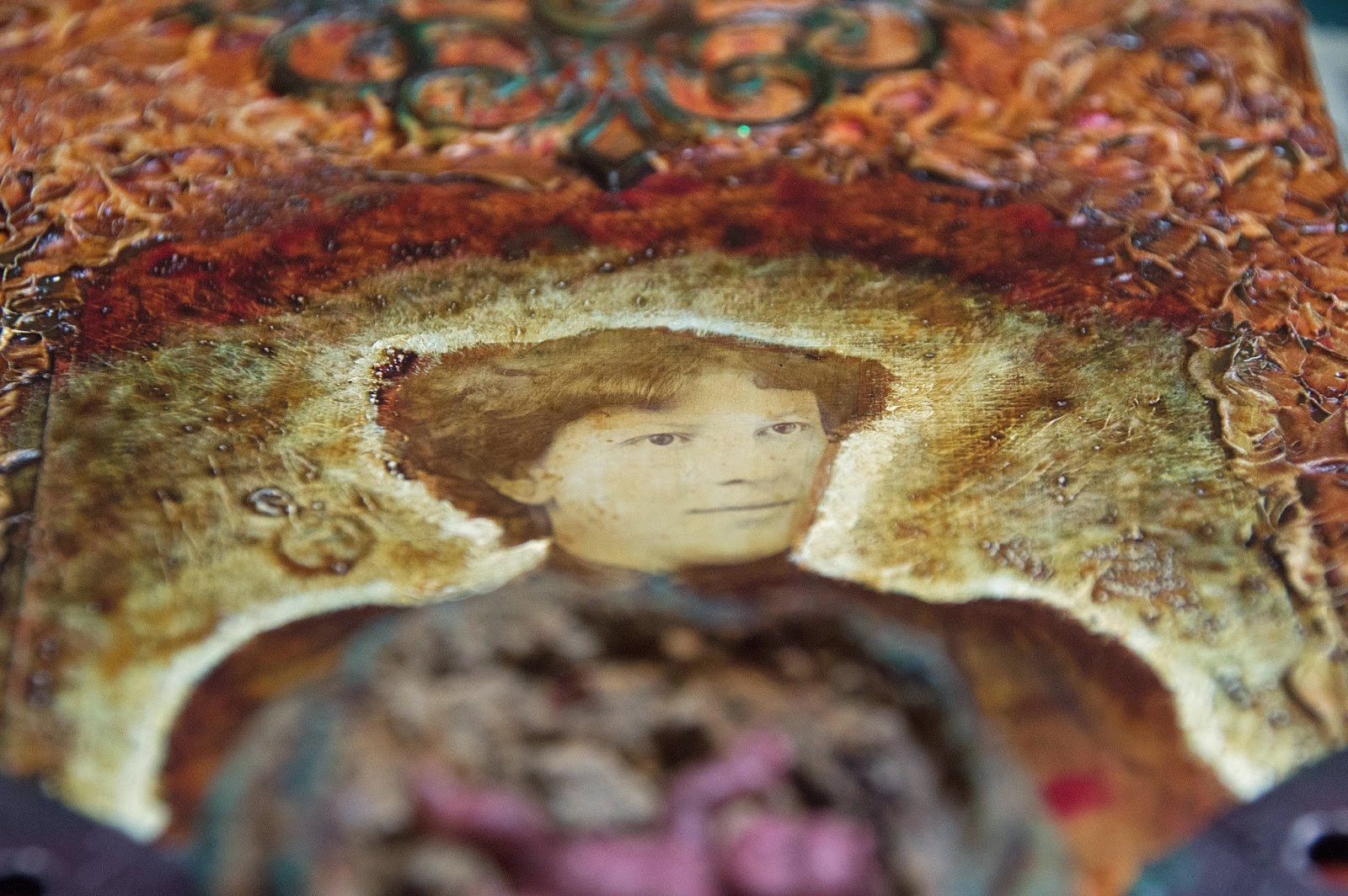 At first I decided to paint wings on Alice.  That lasted a few days as I was distracted by other projects, but...the more I looked at the wings the less I liked them as a 2D addition.  I dug around in my wing stash and settled on these butterfly wings. 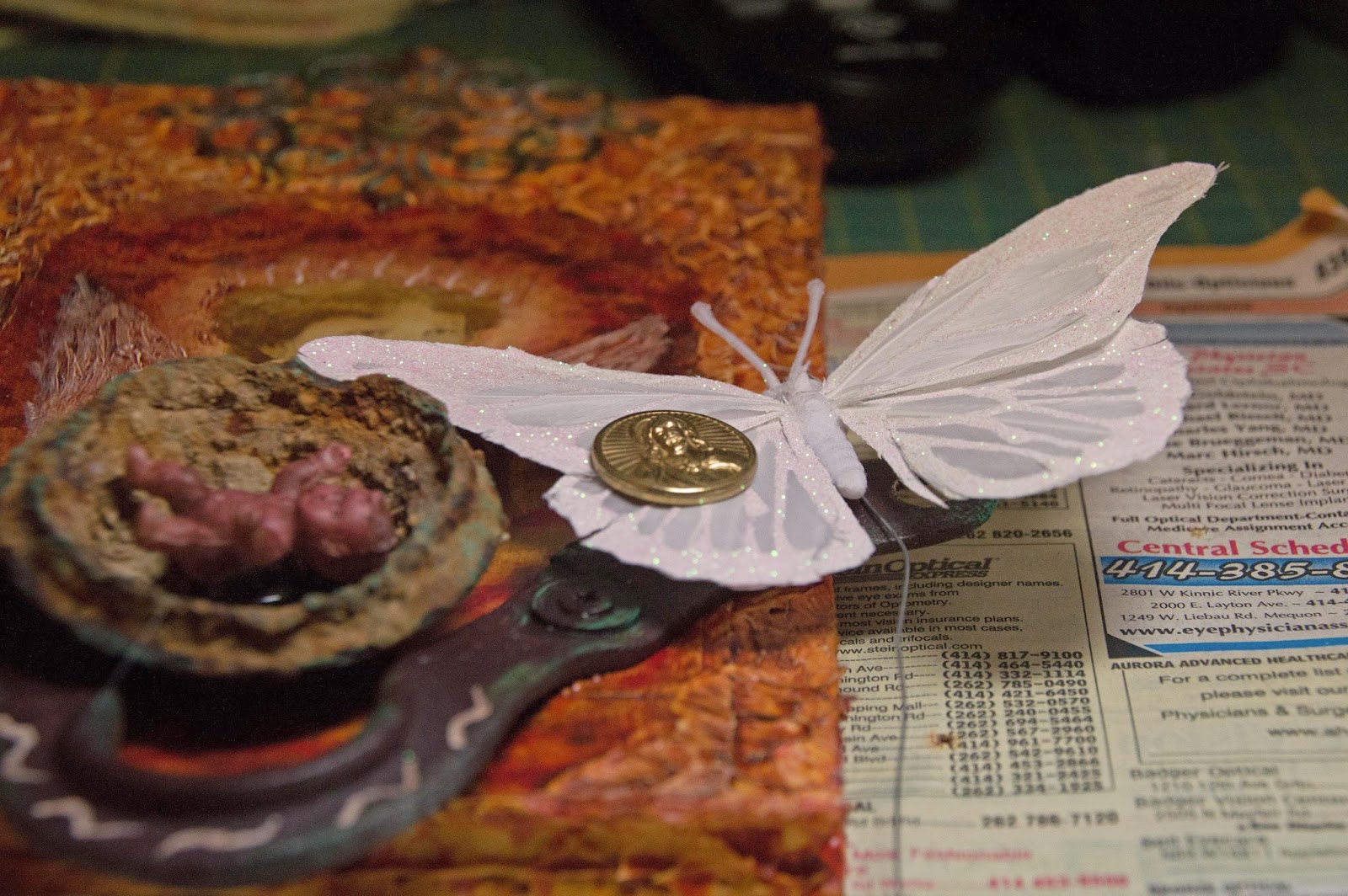 After taking the butterfly apart and laying it on the image, I realized they did not work for two reasons.  One, they were too big.  Two, they were too fragile for as I hacked them apart to try to make them smaller, they just disintegrated. 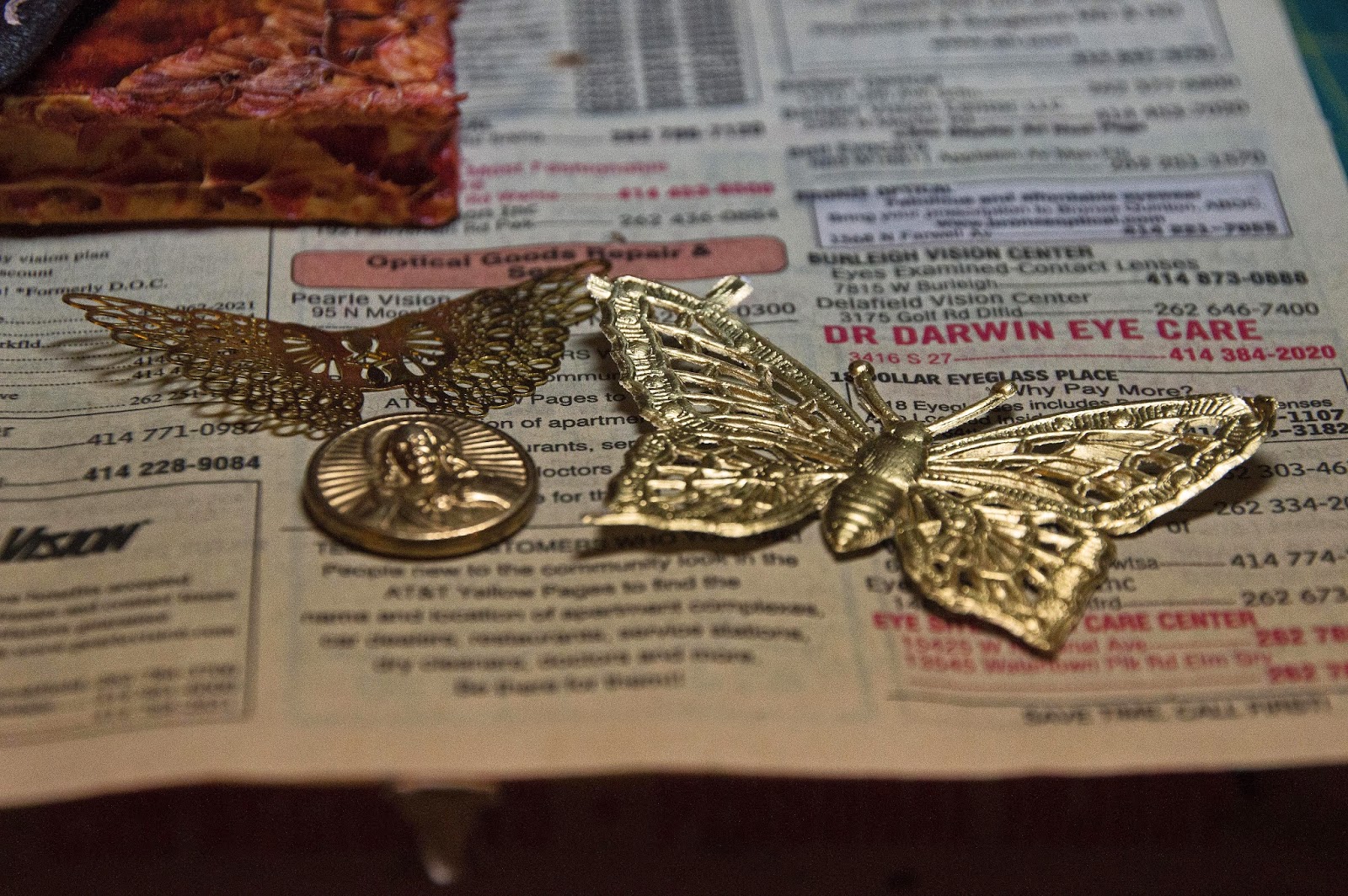 I did not expect the struggle these wings were going to create.  I first used the large gold paper wings shown above but they were too big as well.  Ultimately, I split the little metal wings and they were perfect. 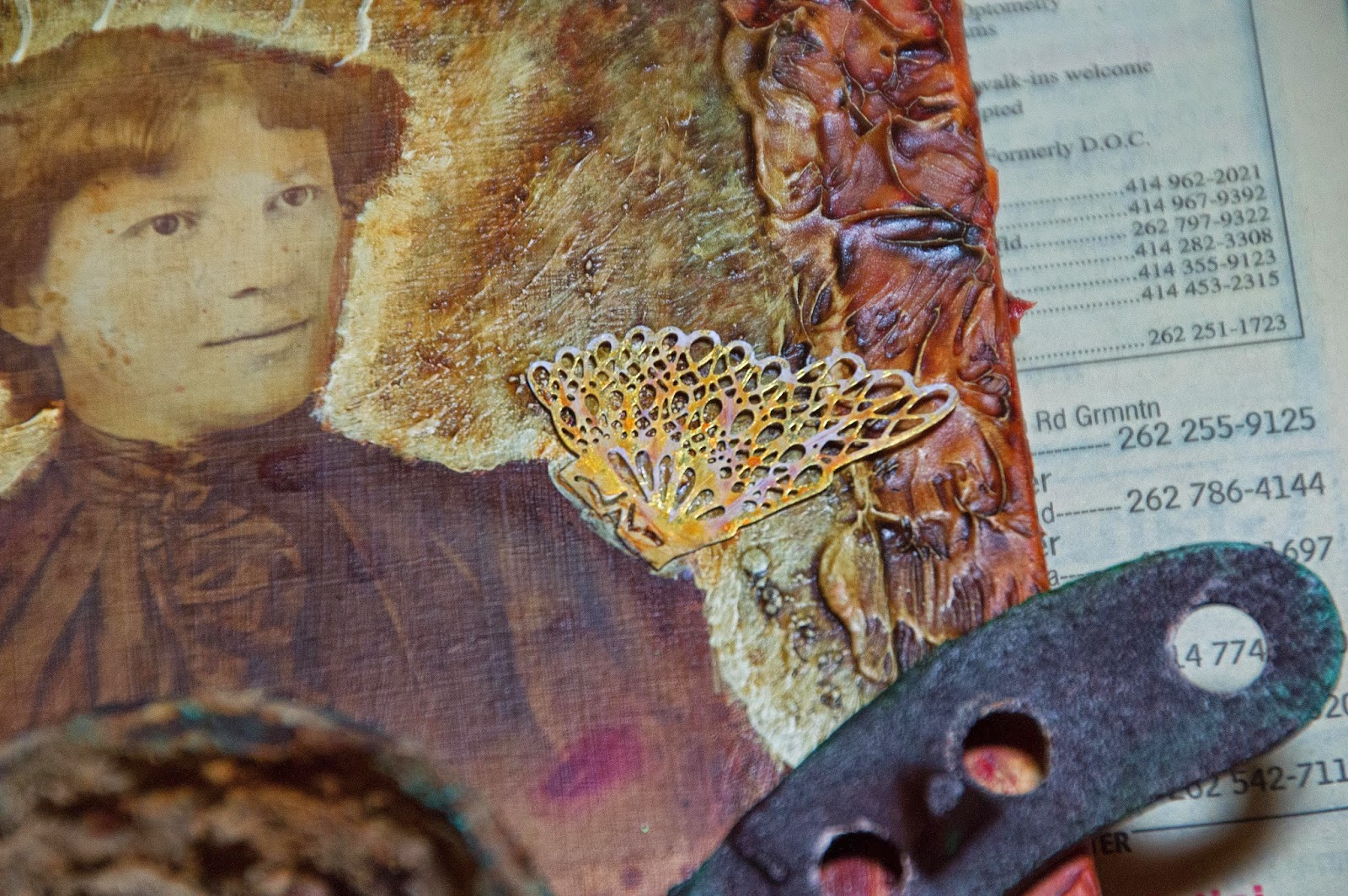 Then is was on to the final details, mostly with paint. 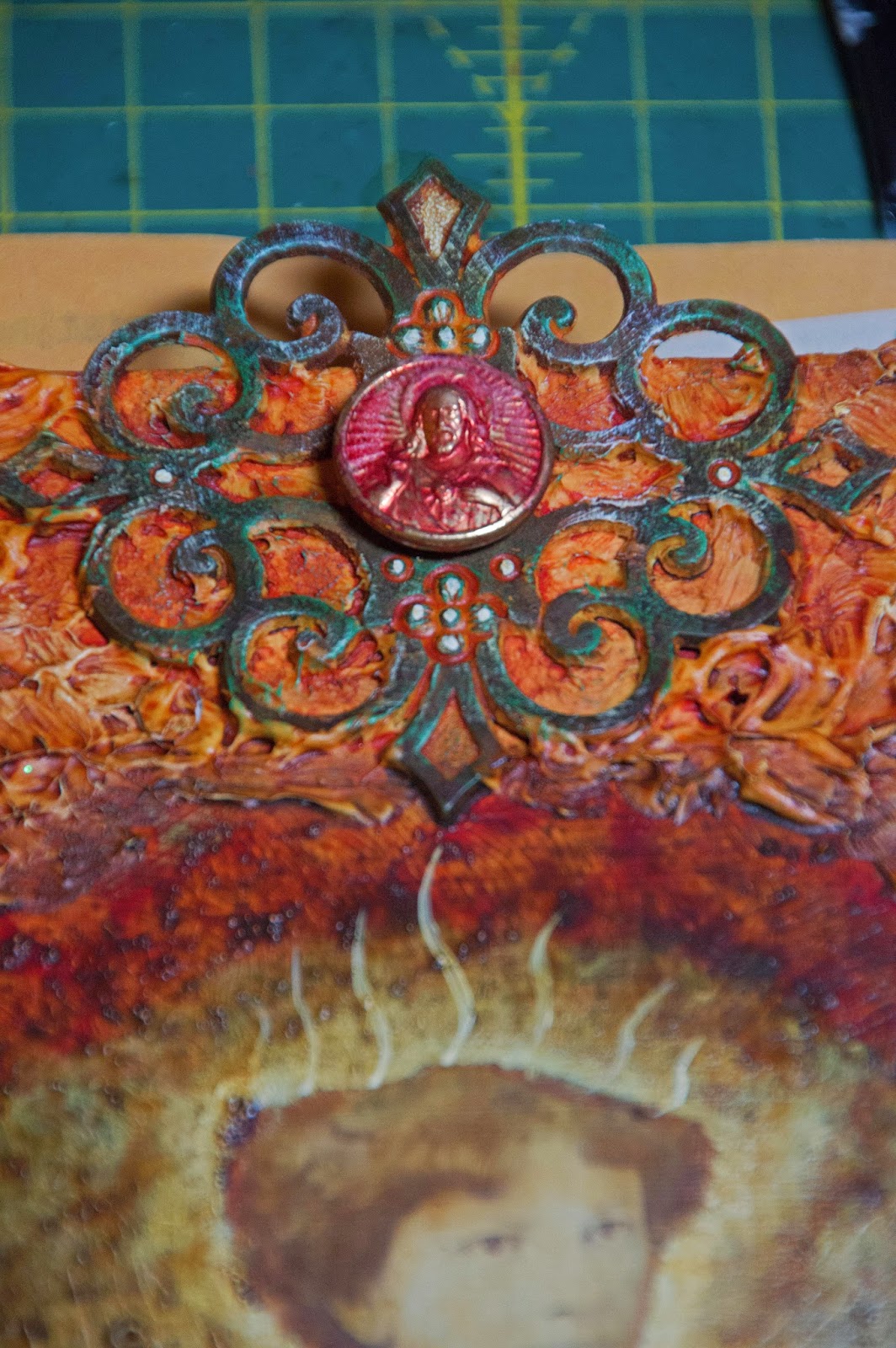 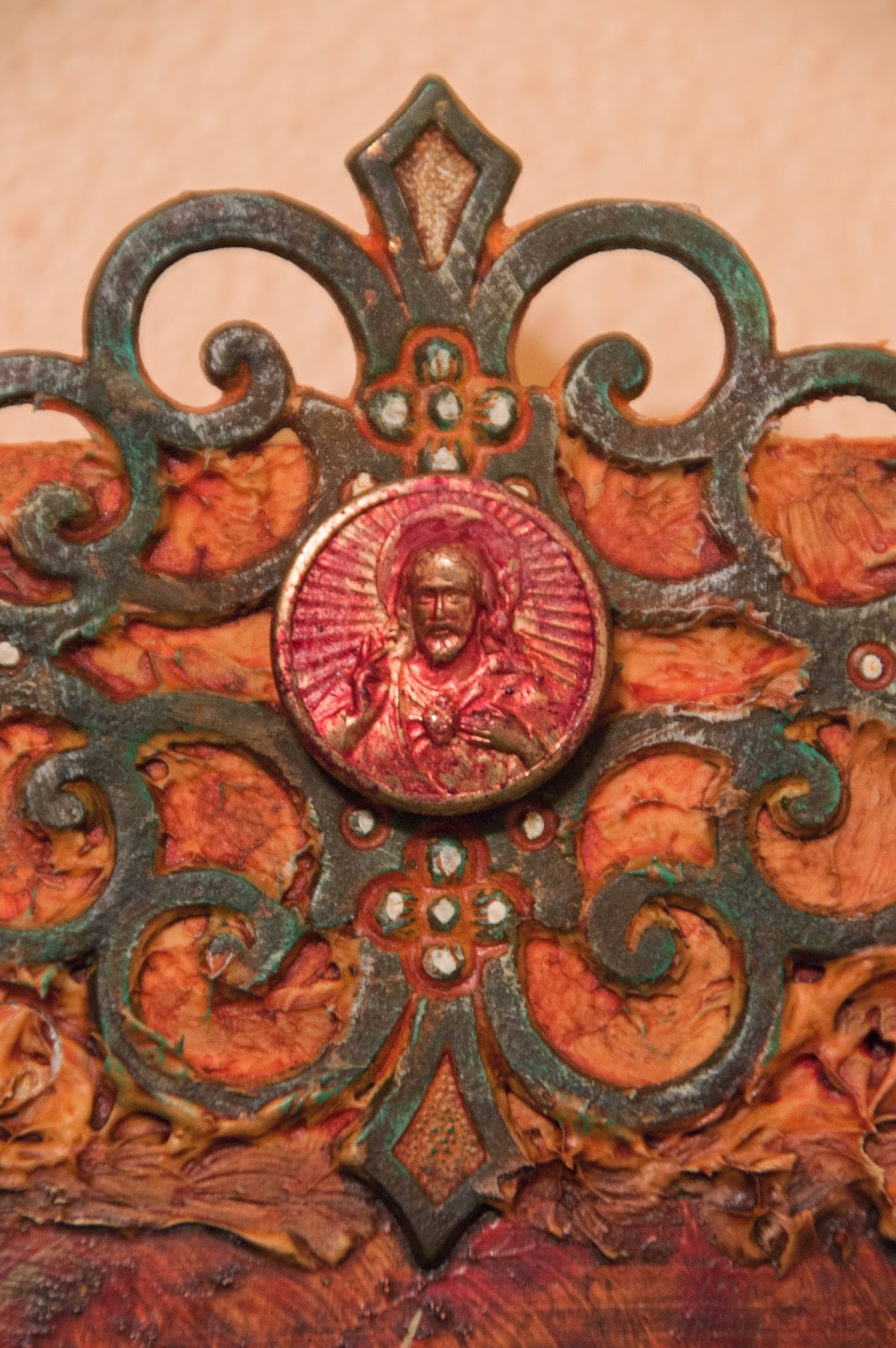 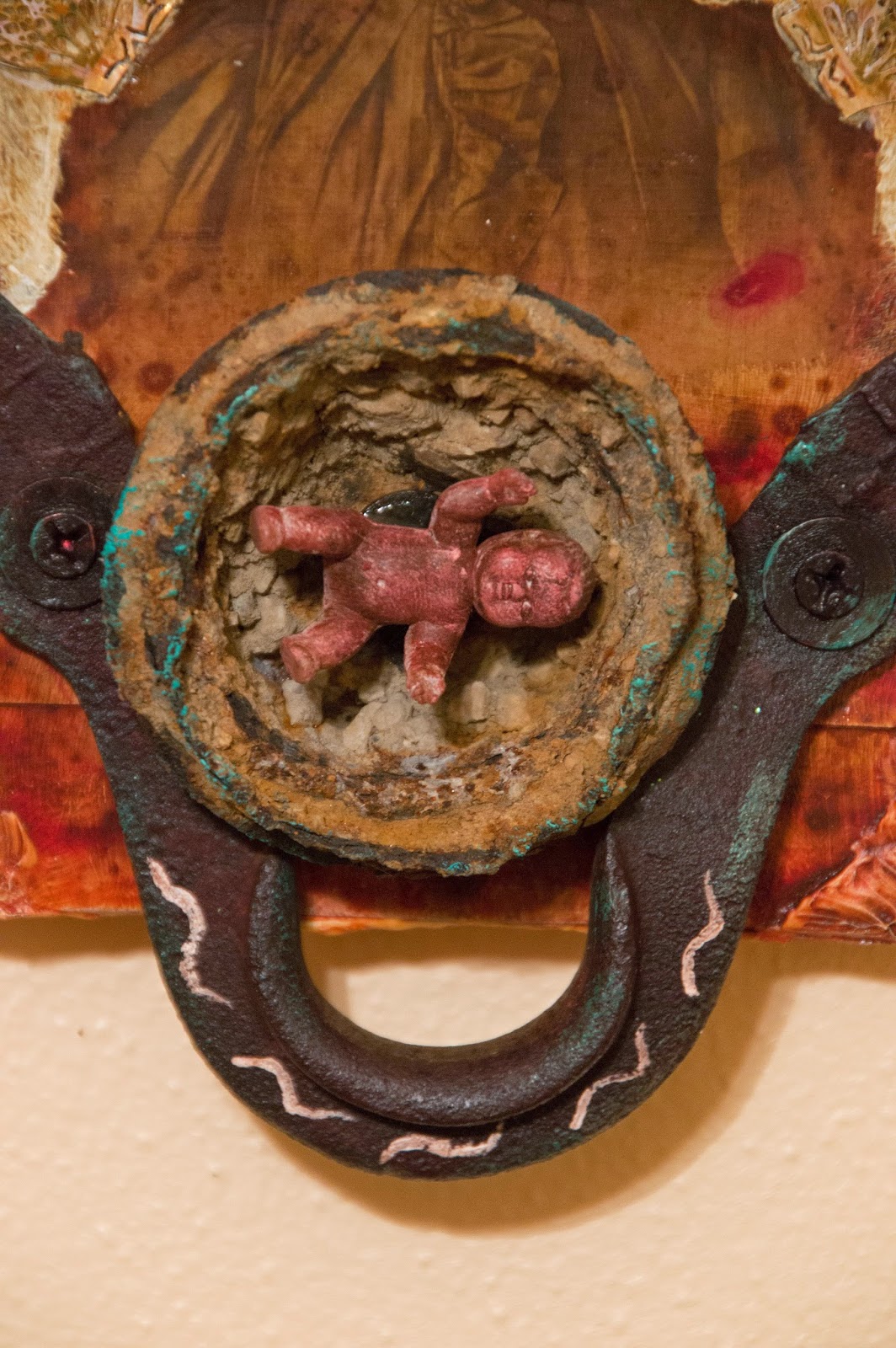 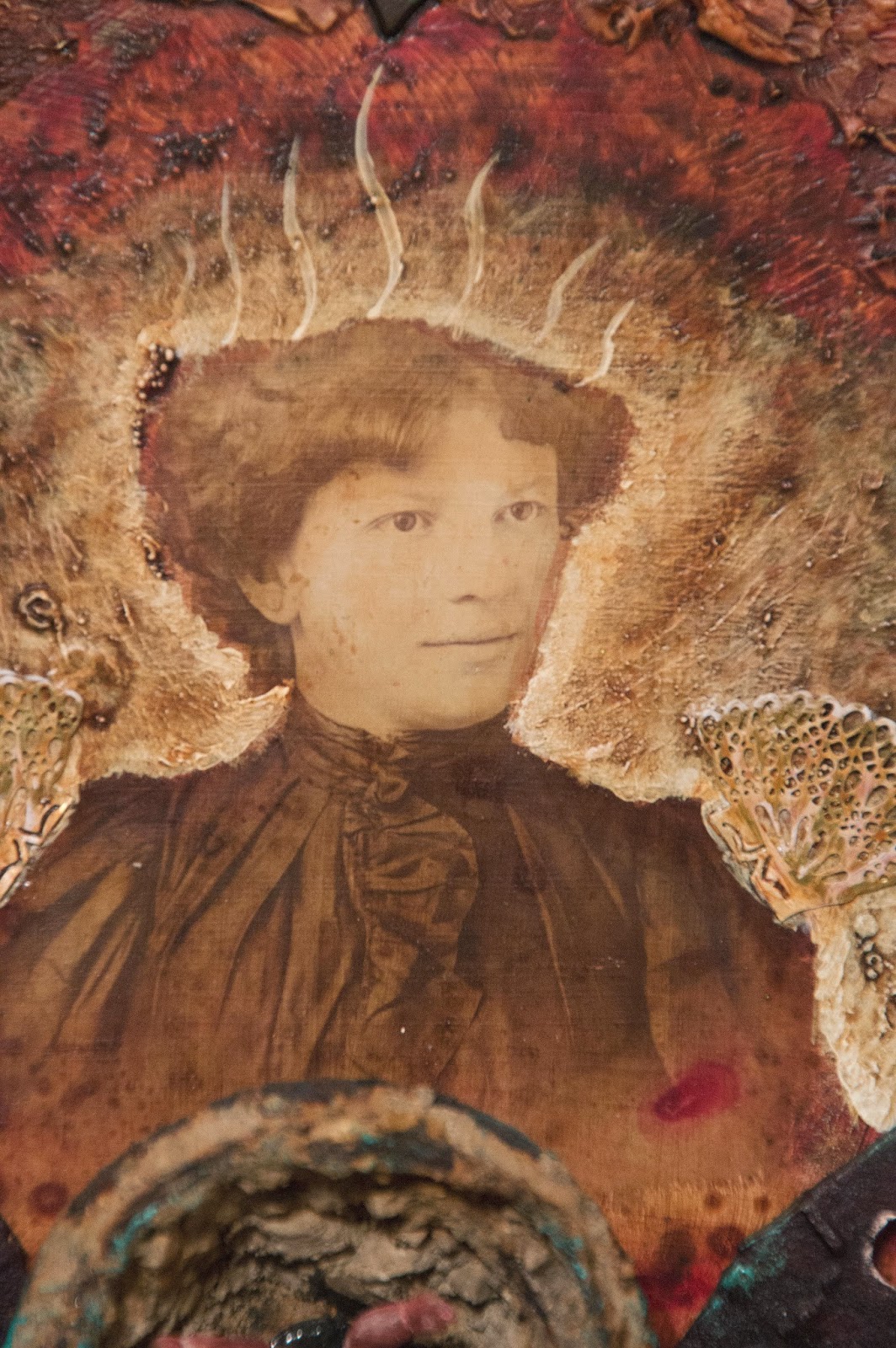 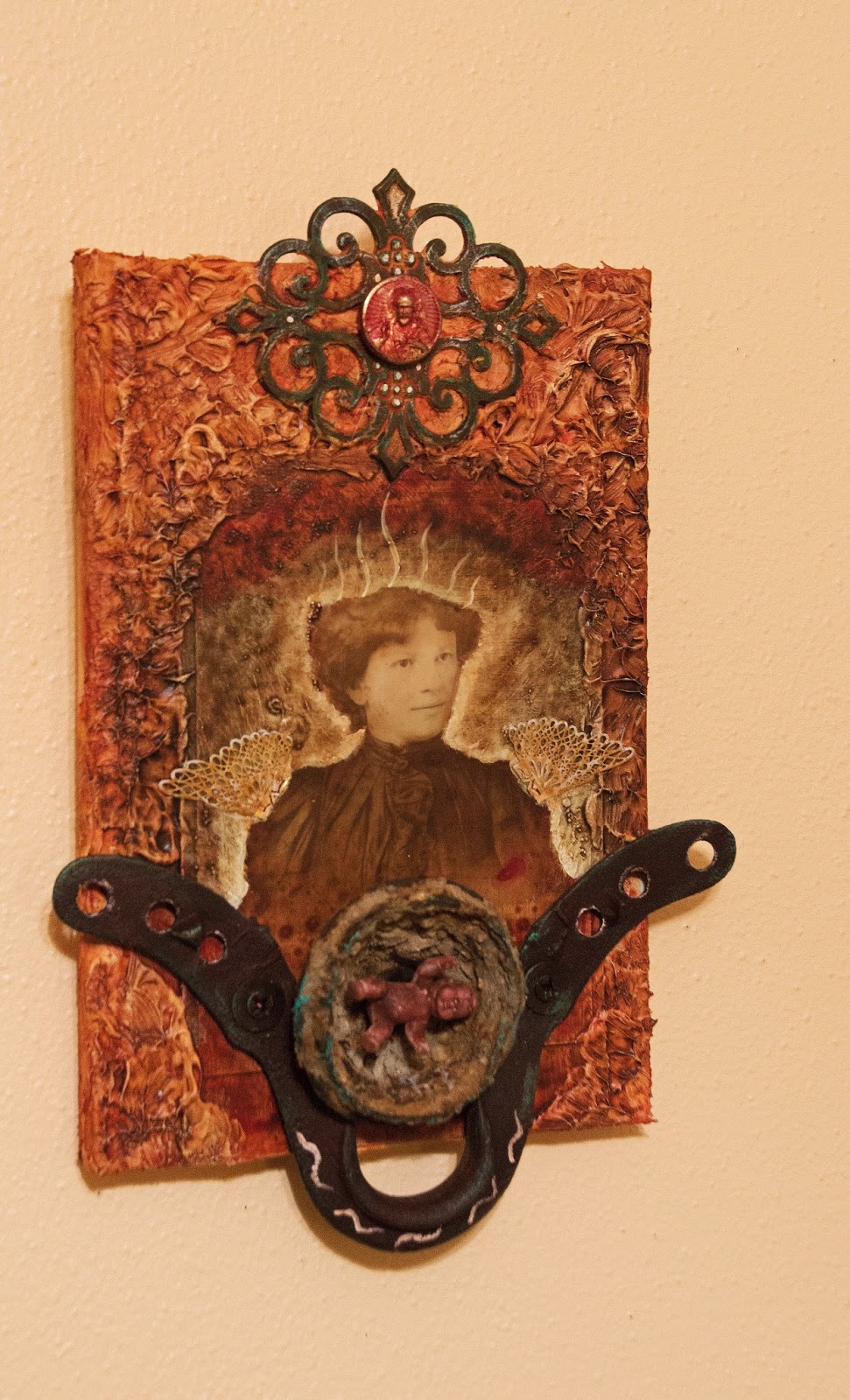 And, so, after much emotional struggle and a few construction issues, we have About Alice. 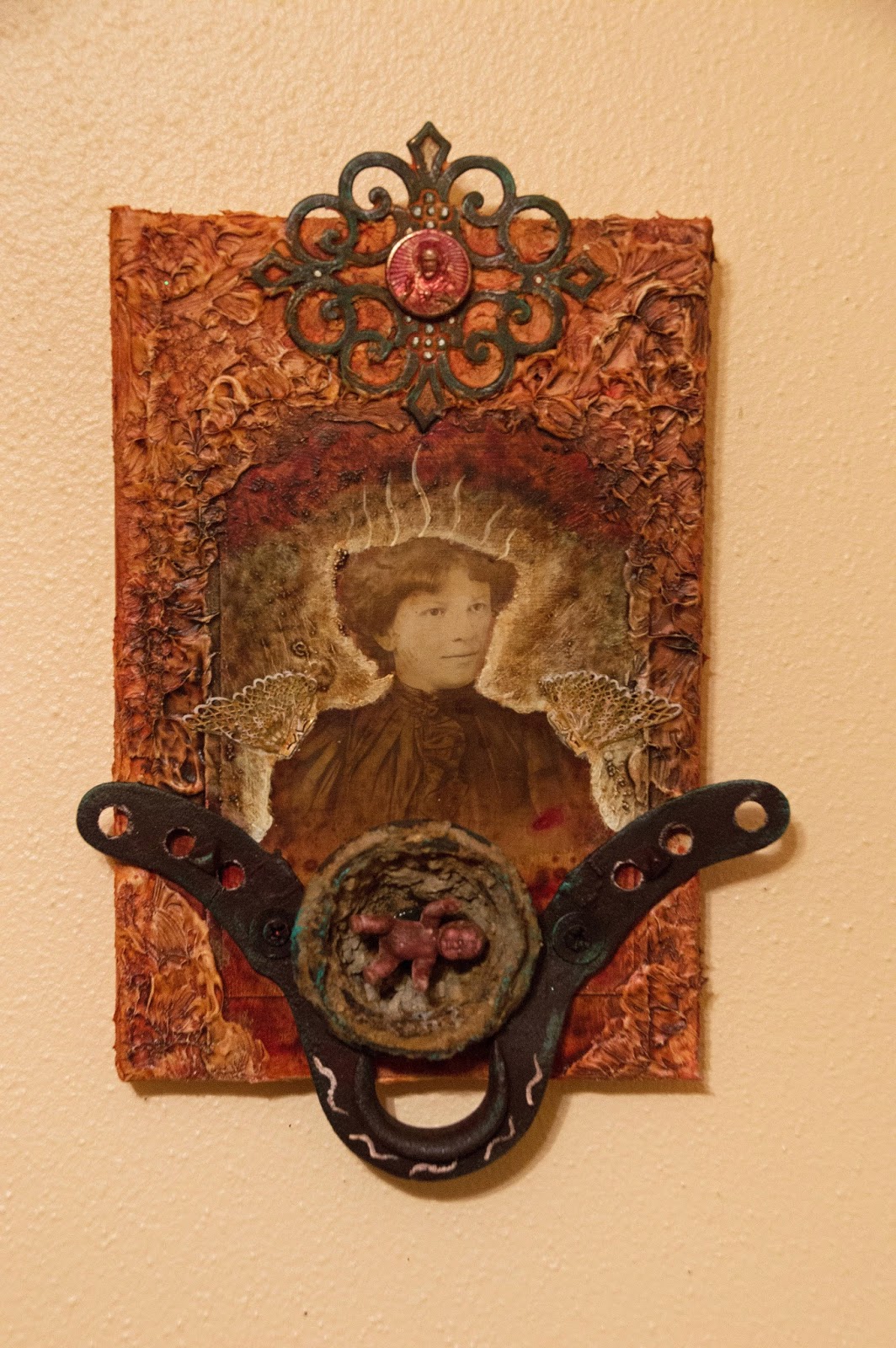