Donny Learns the Unintended Consequences of Eating Too Much Sushi

I introduced my brother-in-law Donnie to the wonders of sushi.  Over the years I have begun to call him "Too Much Sushi Man" in the tone of a superhero voiceover.  This comes after such male bonding experiences as sharing The Love Boat and eating raw stuff that still has its eyes attached because we wanted to prove to the cute waitress that we were "adventurous."

Then, at work, we were cleaning out our lost and found and my staff gave me this little purse with the challenge, "I bet you could do something with this!" 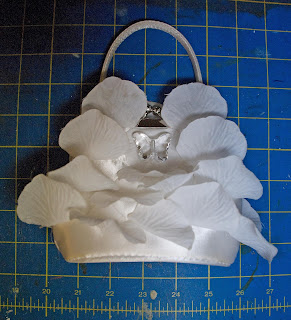 I decided in order to teach my brother-in-law a valuable lesson, I needed a Steve Austin action figure to go with it, sans his head. 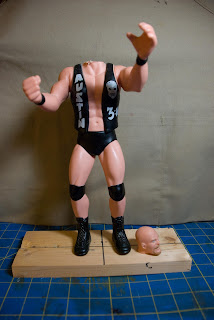 Here is how Steve feels about it. 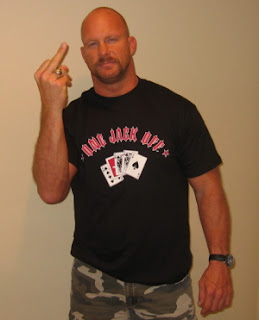 I can tell that I am becoming an experienced assemblage artist because the idea of sticking a little girl's purse onto the neck of Steve Austin no longer seems daunting.  A little bit of rebar wire and a lot of Apoxie Clay later and there you have it.  As for poor Steve's decapitated head, it was attached to some more wire and some aluminum foil in order to create the fish's tongue. 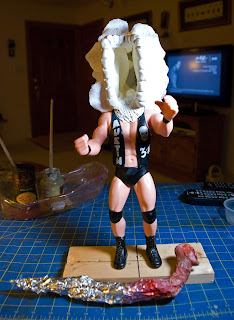 Painting is always the best part and takes the most time.  For Donny's head (the former Steve Austin head--not to confuse you), I painted using the Kroma Crackle technique taught by my hero, Michael de Meng.  This stuff is great for giving an alien, fish scale, creepy look to anything. 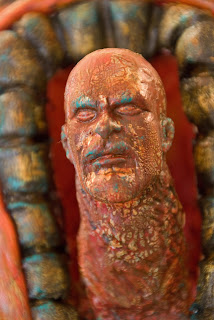 Add in a set of chop sticks and some fishing line weights and the figure was ready to go.  I hope I have not insulted the combined nations of China and Japan but I hand letter the word Shu on one side of the chopsticks and Shi on the other. 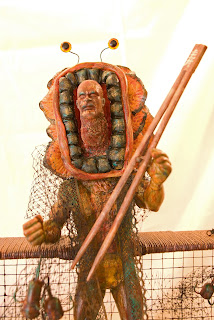 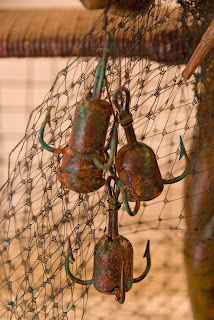 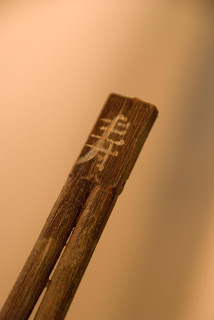 Early on I thought it would sit in a plastic box I had but I went with a chunk of wood instead.  This let me apply another de Meng technique, the burning shellac routine.  Yes, some blue paint, some glue and some shellac and --whoooeee--set it on fire.  The base has a nice watery feel to it due to this. 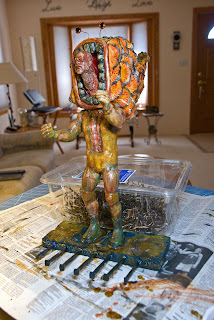 As often happens in my art, I had a feeling this piece was not done.  I realized that it could not really stand on its own.  No, literally, it could not stand on its own.  So, I had to nail some barn nails into the front of the wood in order to keep Donny upright.  Of course, because I act before I think, that split part of the wood base but thanks to the miracle of Apoxie Clay, all was well again. 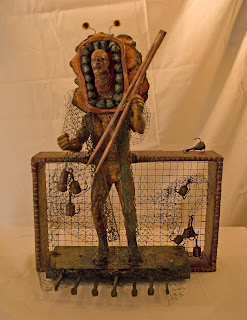 Then I decided that I had a foreground but the whole thing need a background.  So I found this wire basket thingee I had from some rummage sale (10c) and painted it up.  After adding in more fishing line weights and some fish net from Jo-Ann's, I decided I was done. 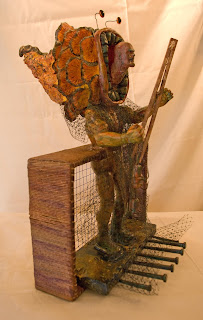 Confession:  I eat more sushi than Donny.  But what is the fun of picking on yourself?  Just remember, the next time someone says, "You are eating too much of that--you are going to turn into it," you have seen how it is done right here. 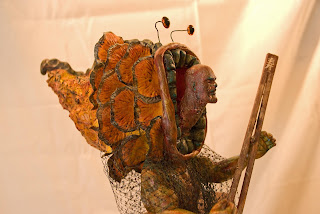