Monkeying Around on the Ride to the River Styx

Back in April of 2013 at Valley Ridge during the second Make What Ya Brung (http://artthou-gniebuhr.blogspot.com/2013/06/make-what-ya-brung-2-at-valley-ridge.html) I started painting this monkey planter that I found somewhere. 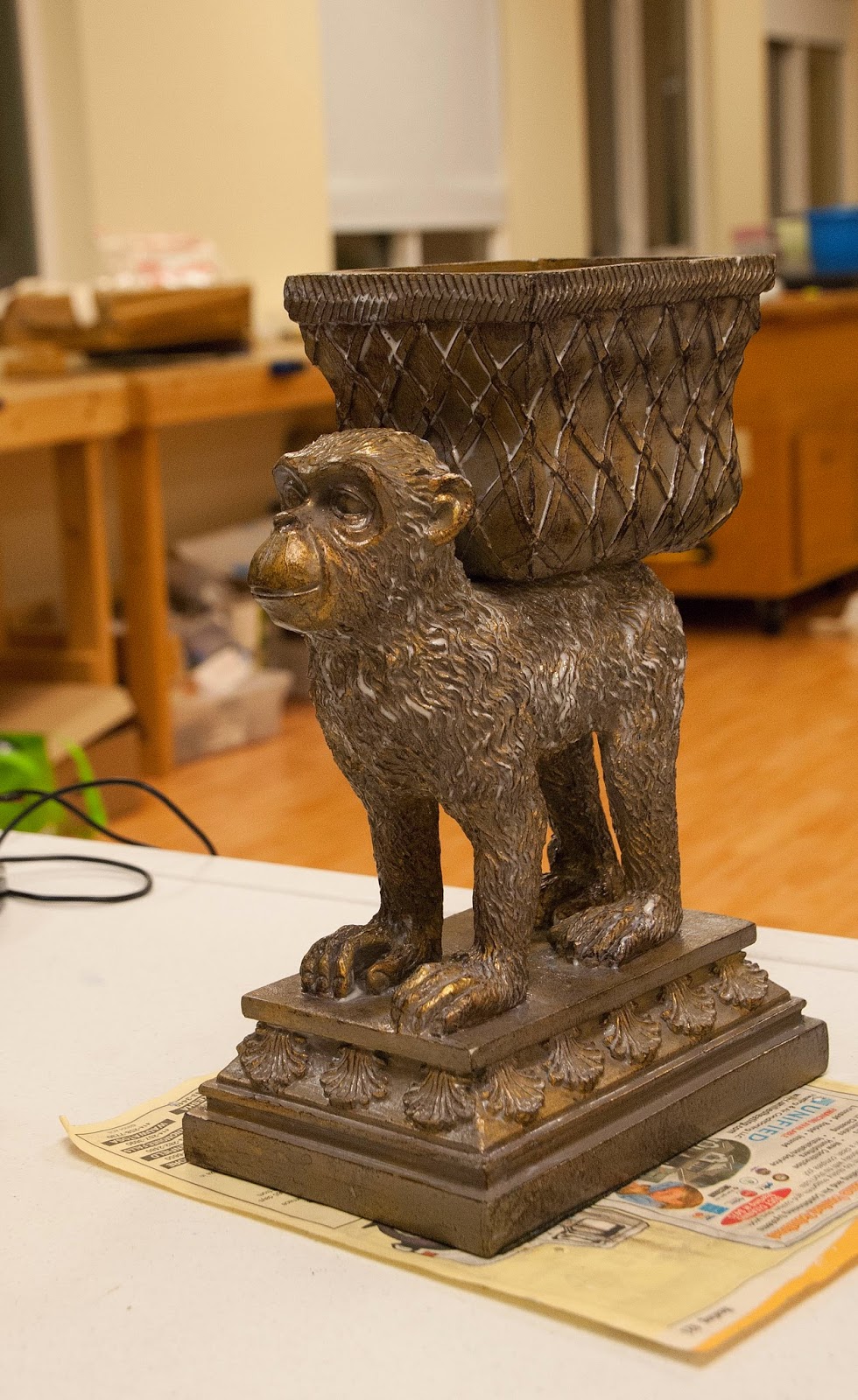 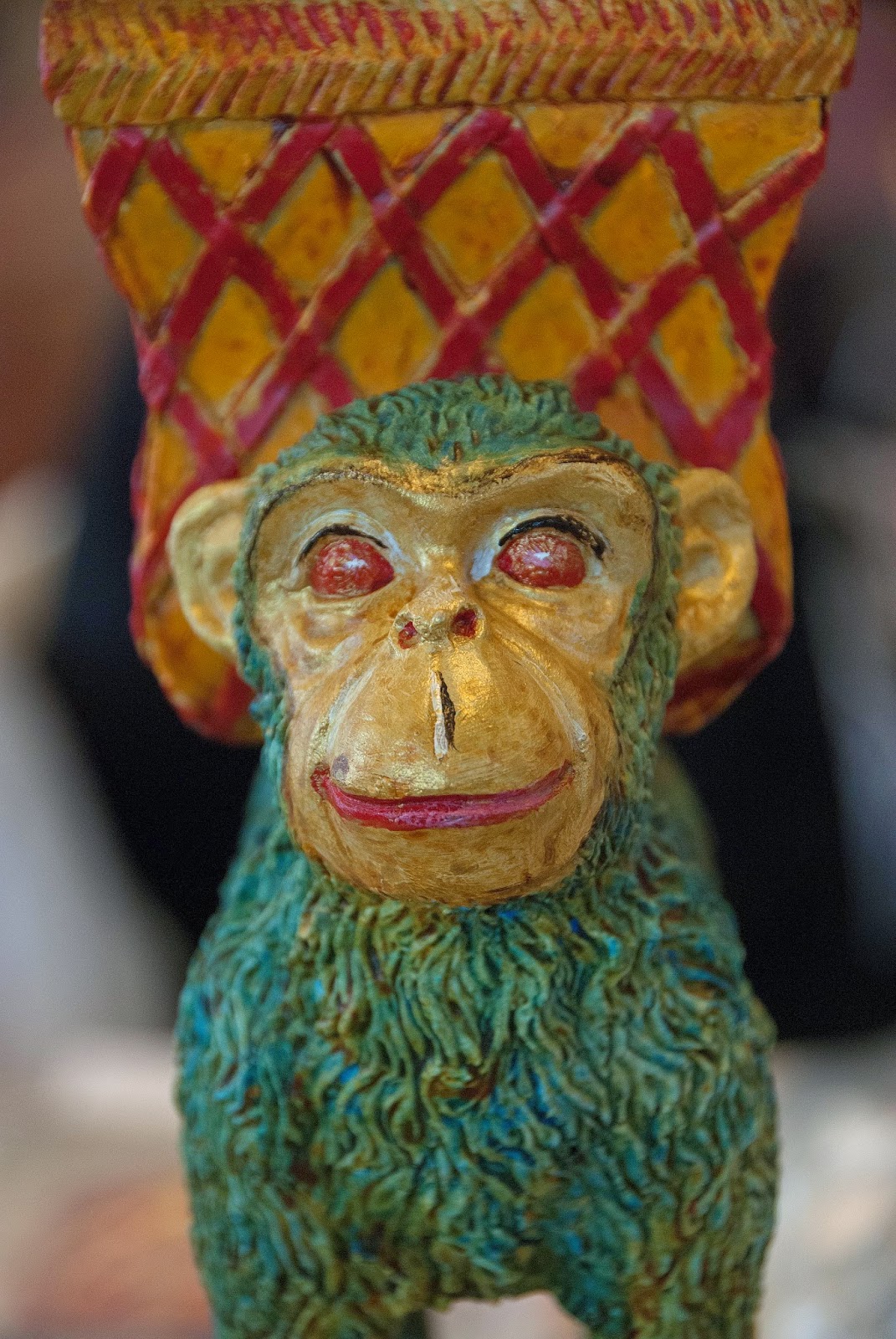 After that workshop it sat around in my basement for a year before I decided it was time to commit to something.  I worked on this during the year 2014 by painting a frame 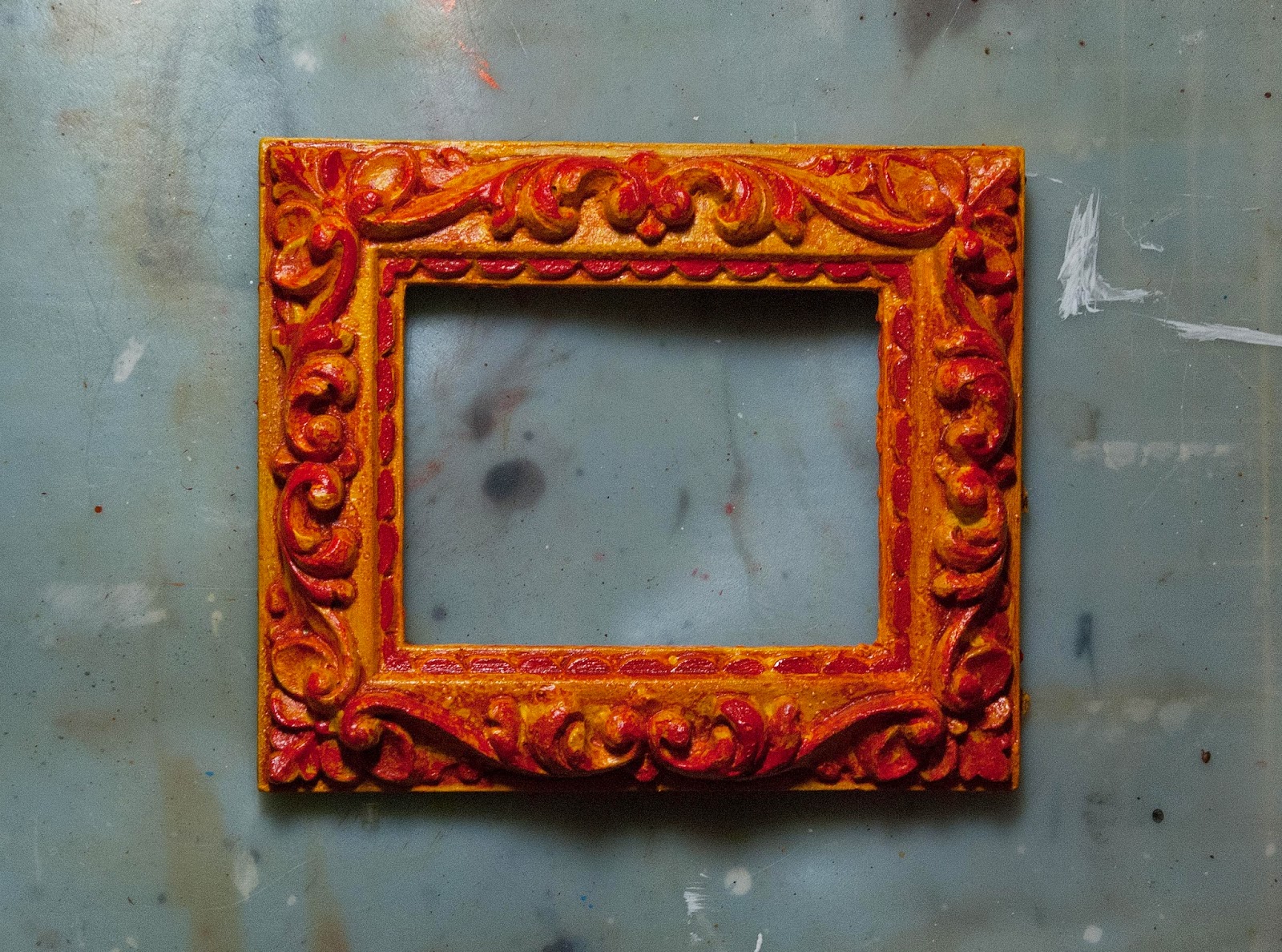 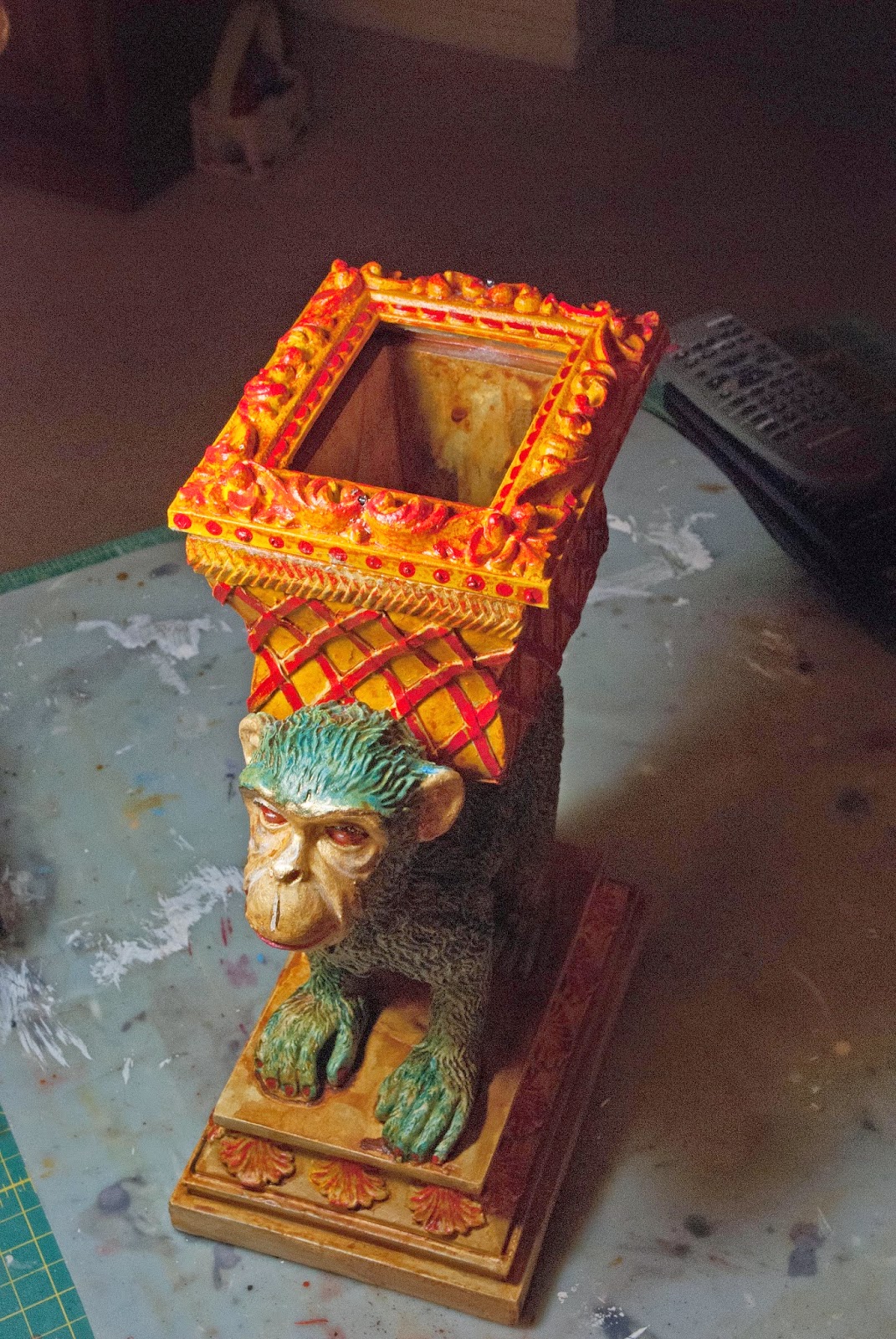 and then added the frame to the top of the planters as a sort of ledge thingee.

The next step was to add something, or in my mind, someone to the ride.  It was at this point that I began to formulate an idea that this was vaguely the ferry transporting the souls of the newly dead across this Styx River to the underworld.

I decided that I would put a whole bunch of skeletons into the planter which I did.  Then the project got set aside for another couple of months until I decided to finish it off.

What became apparent to me on the third review was that I was going to need to add some things to this to give it more of an expanse.  I decided the first item was some sort of hood.  While cleaning the basement I came across a lamp top that was prefect for this project and was the actual inspiration to take the third whack at this one.

I needed something to hang the lamp shade on so I dropped a wood post into the planter amongst the skeletons I decided were going to be the dead spirits on the way to Hell. 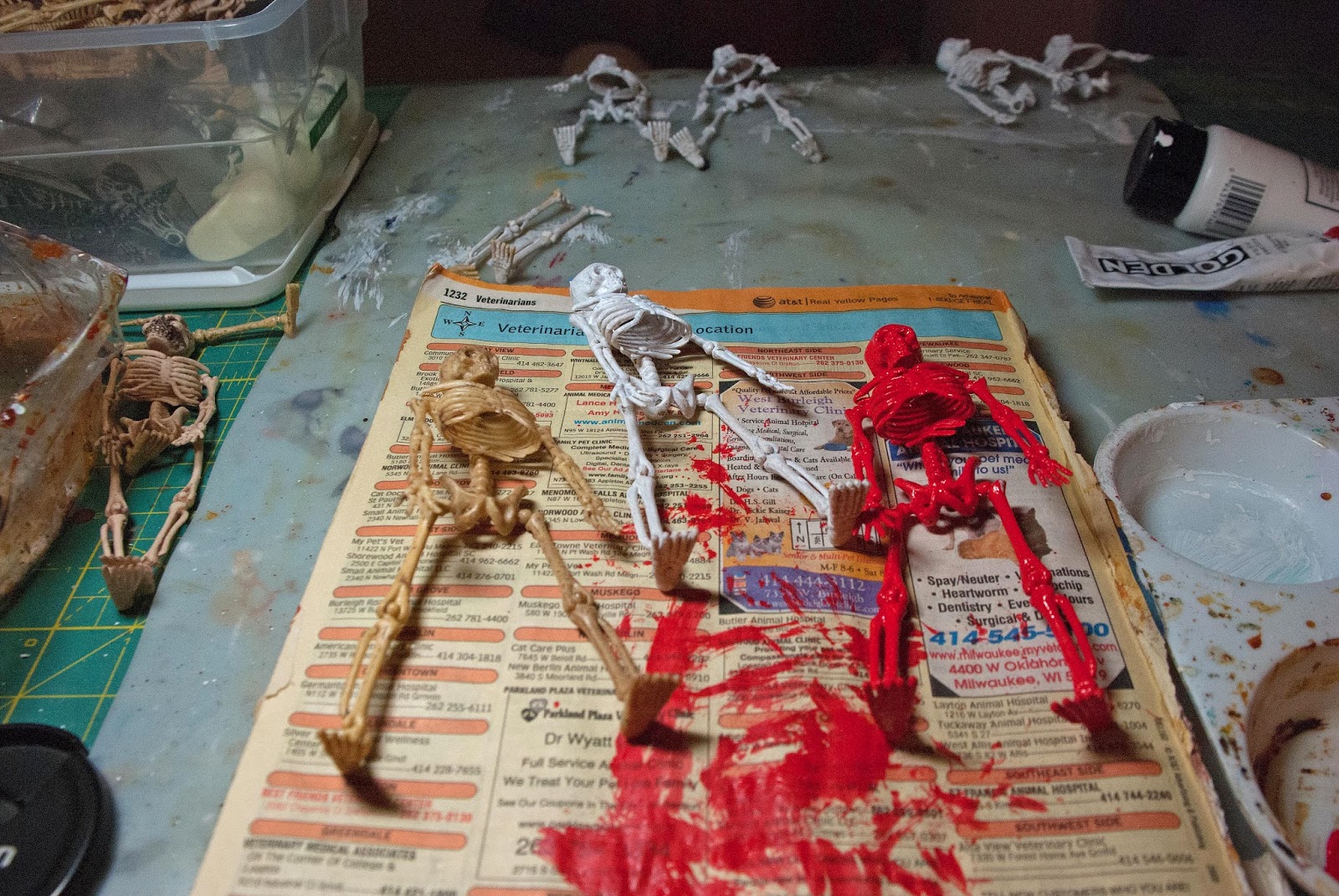 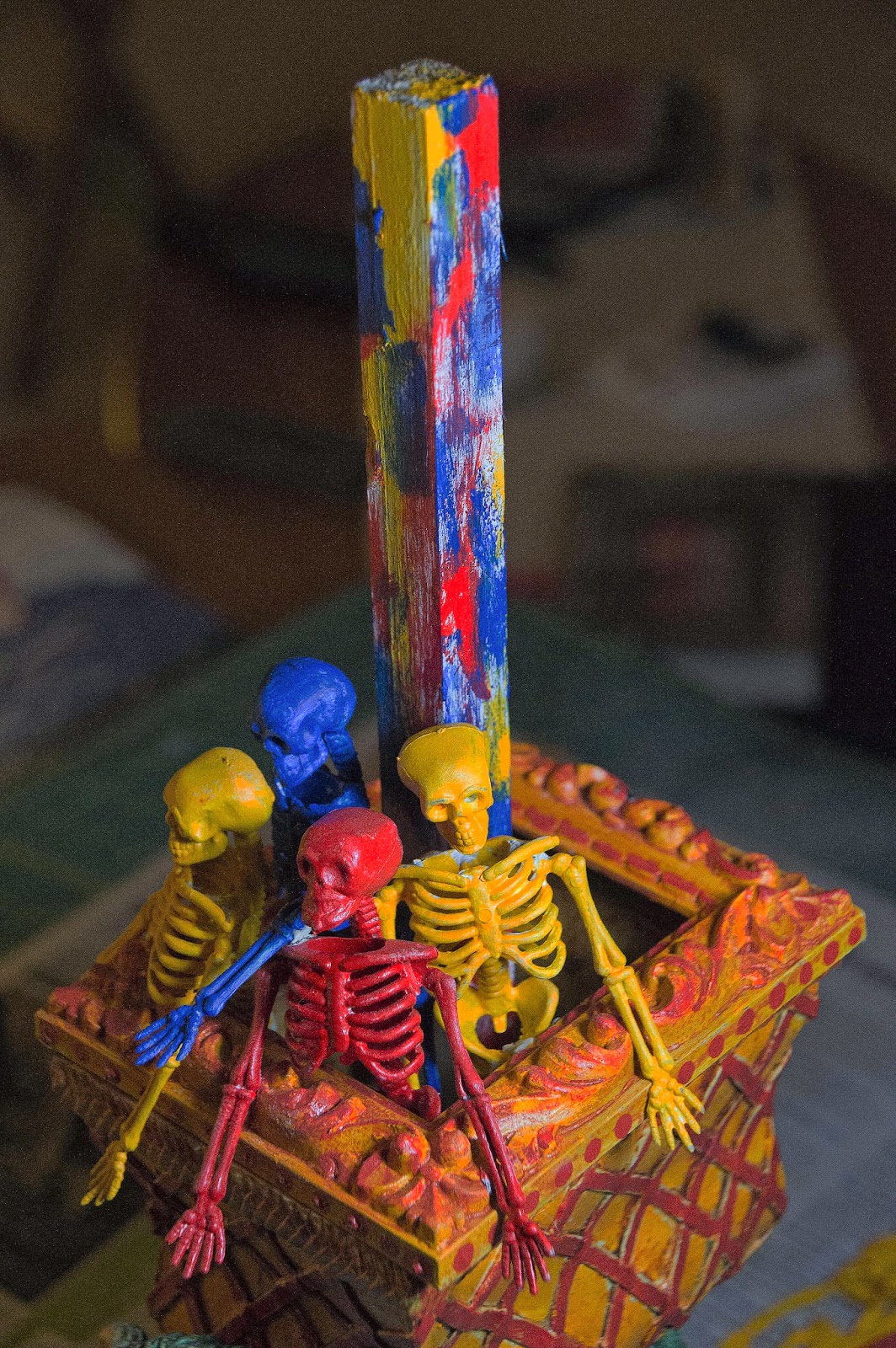 Now I decided this needed something more horizontal so I decided to add a blade to the rear.  However, this proved a challenge as so much of the vertical was already in place. 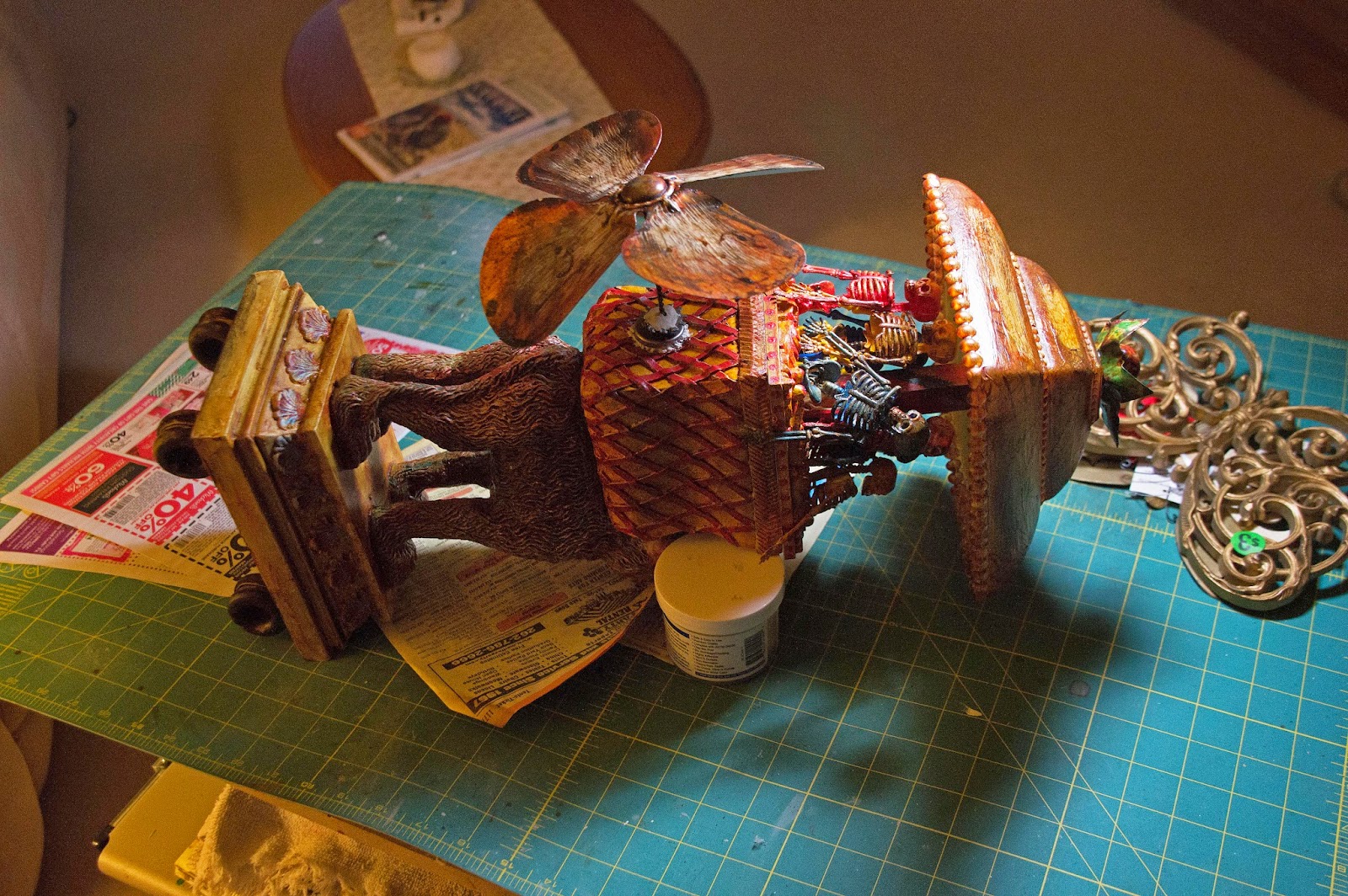 Once upright, I decided I had The Surrey With the Fringe on Top except I had no fringe.  After rejecting some possibilities, I decided to use a curtain pull after taking it apart. 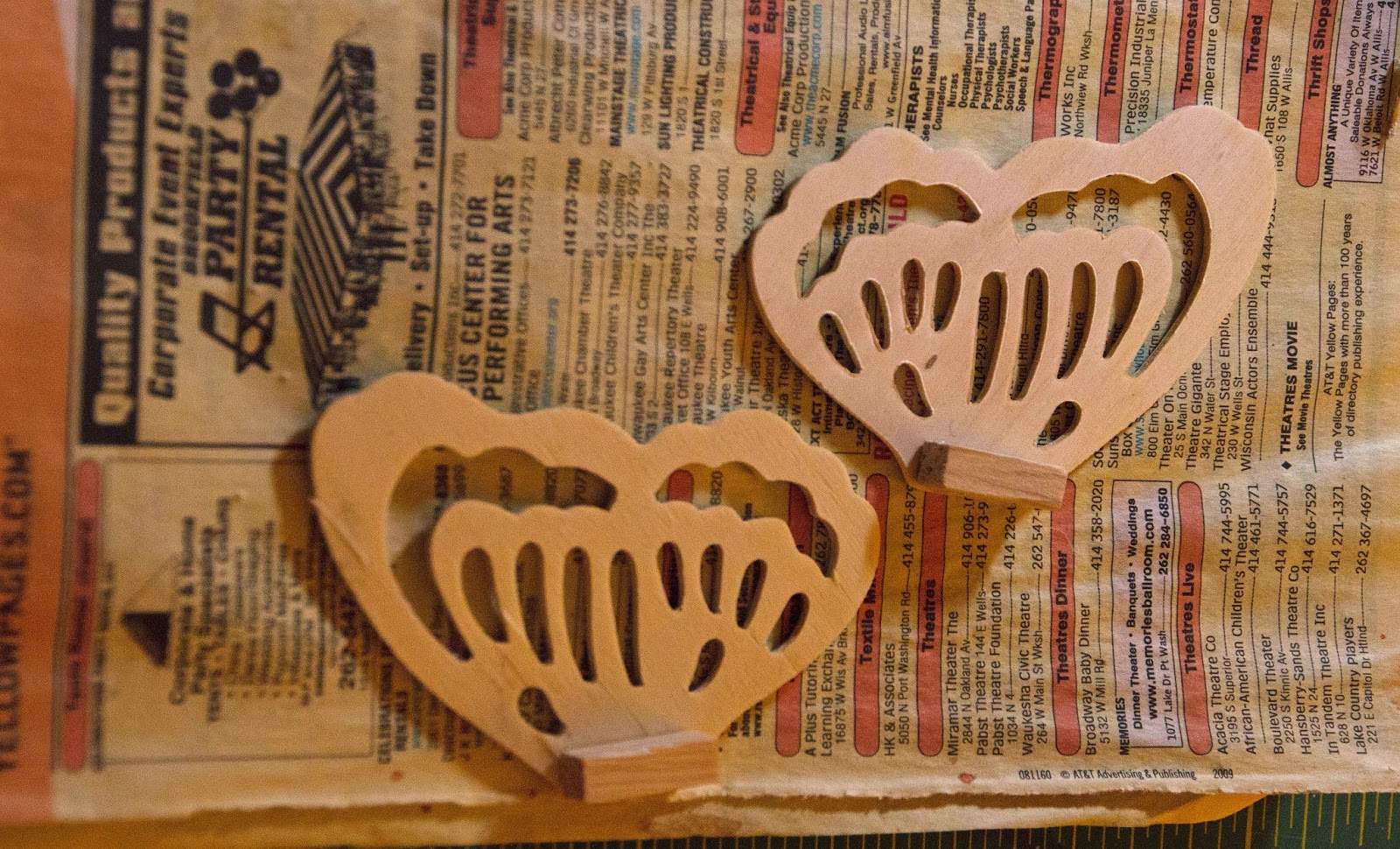 Some of those wood pieces you can buy at Michaels were added to the side to give it even more width.

So, after two years and much procrastination, I present Monkeying Around on the Ride to the River Styx. 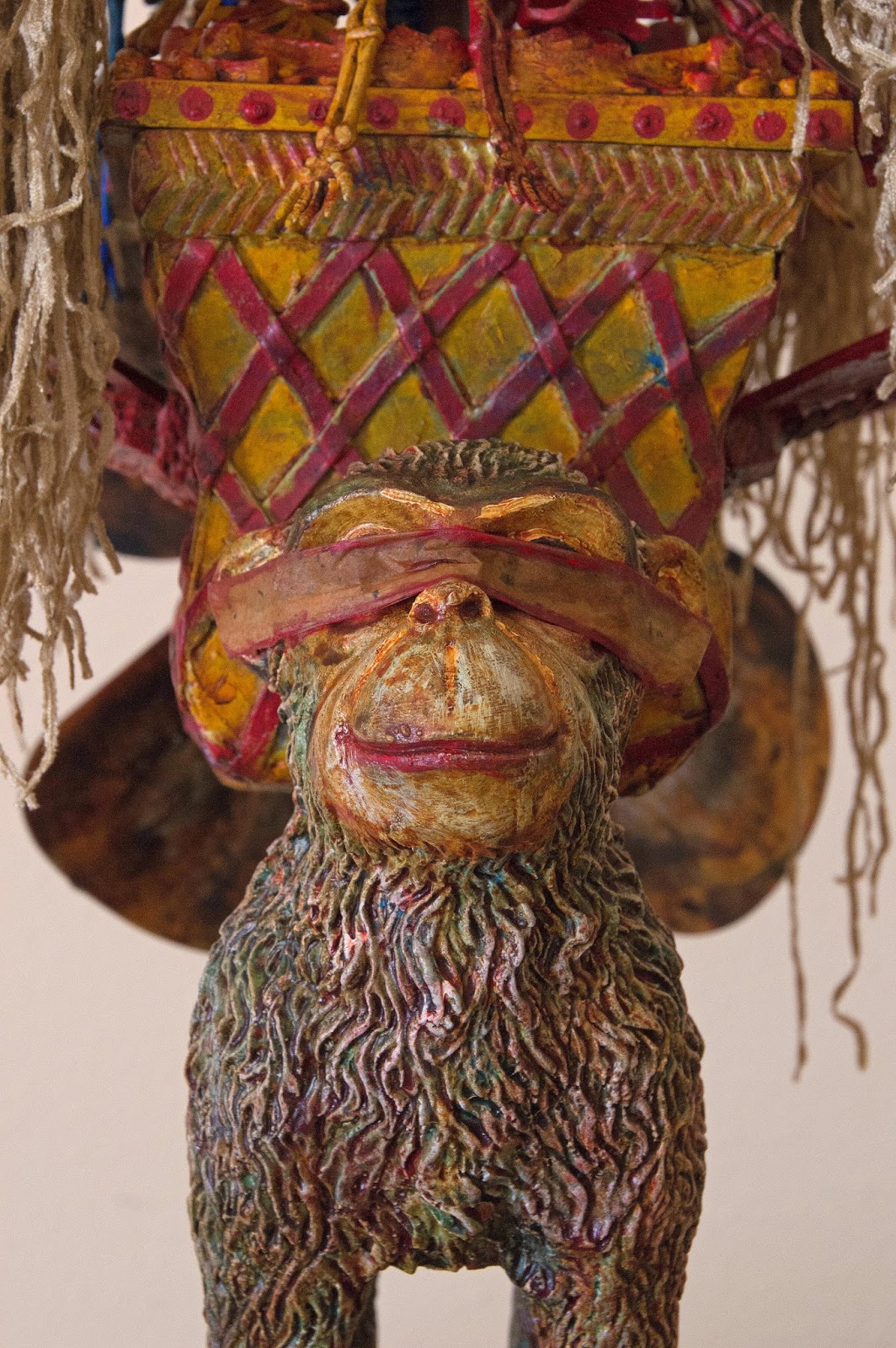 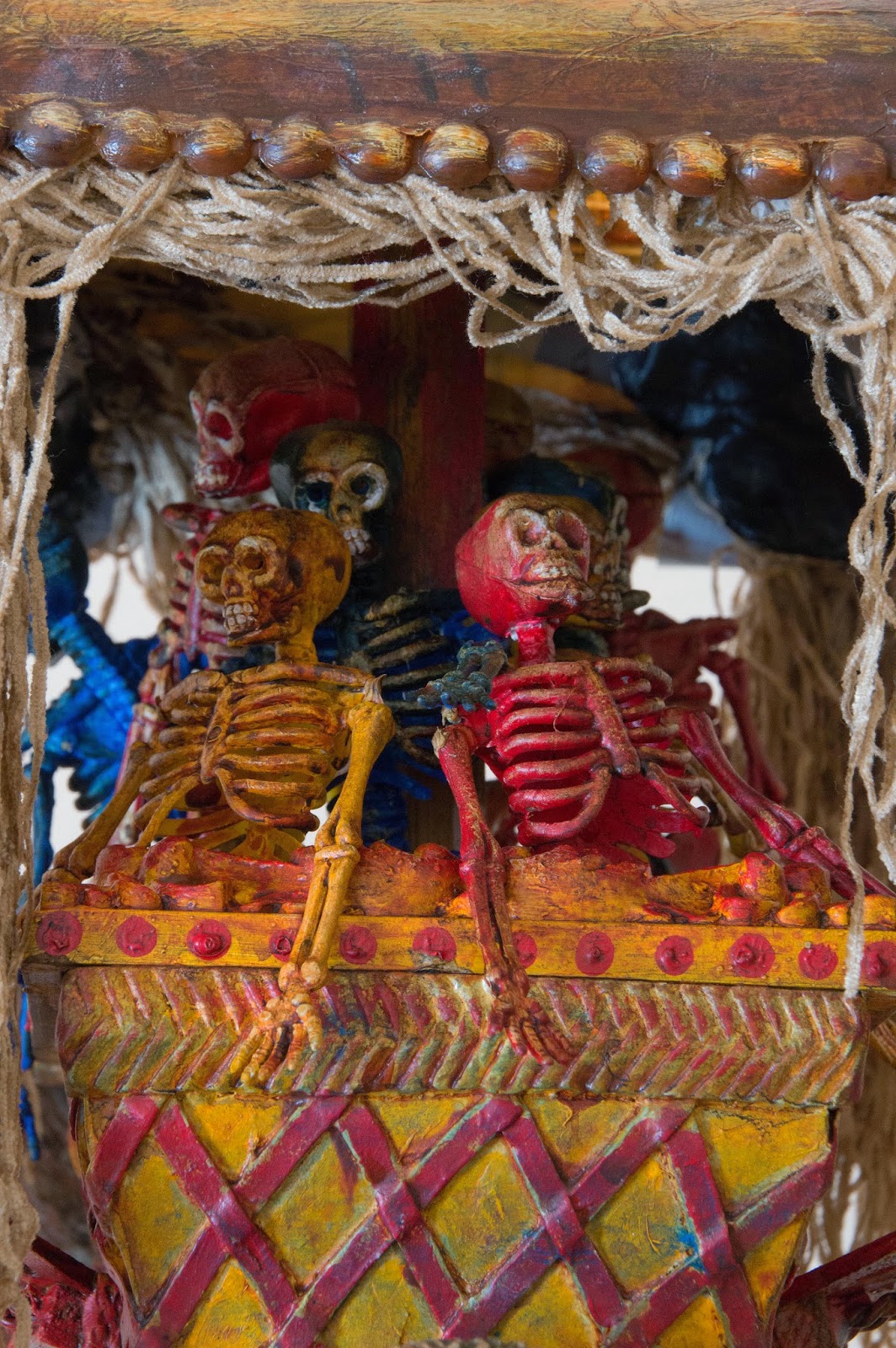 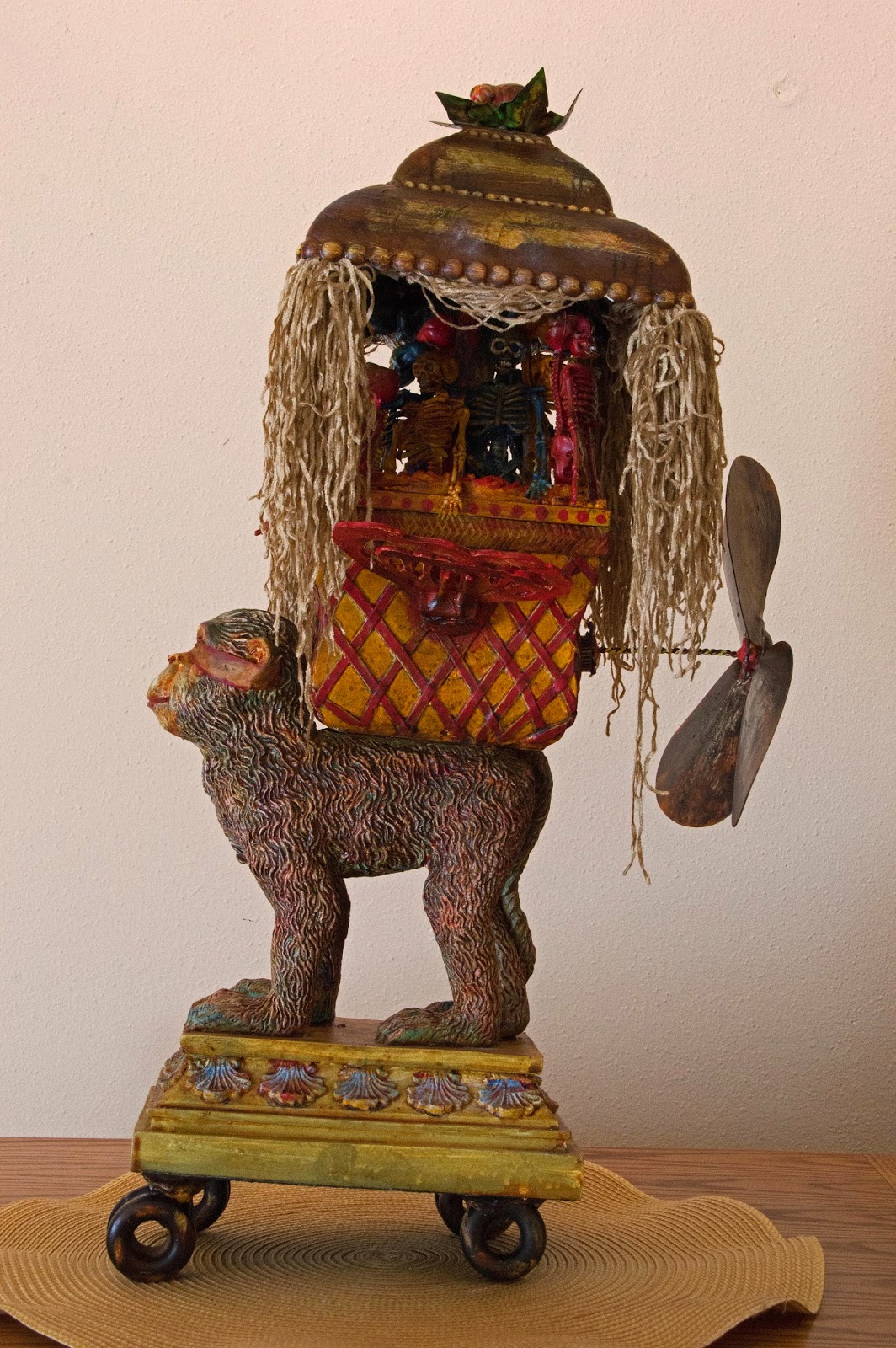 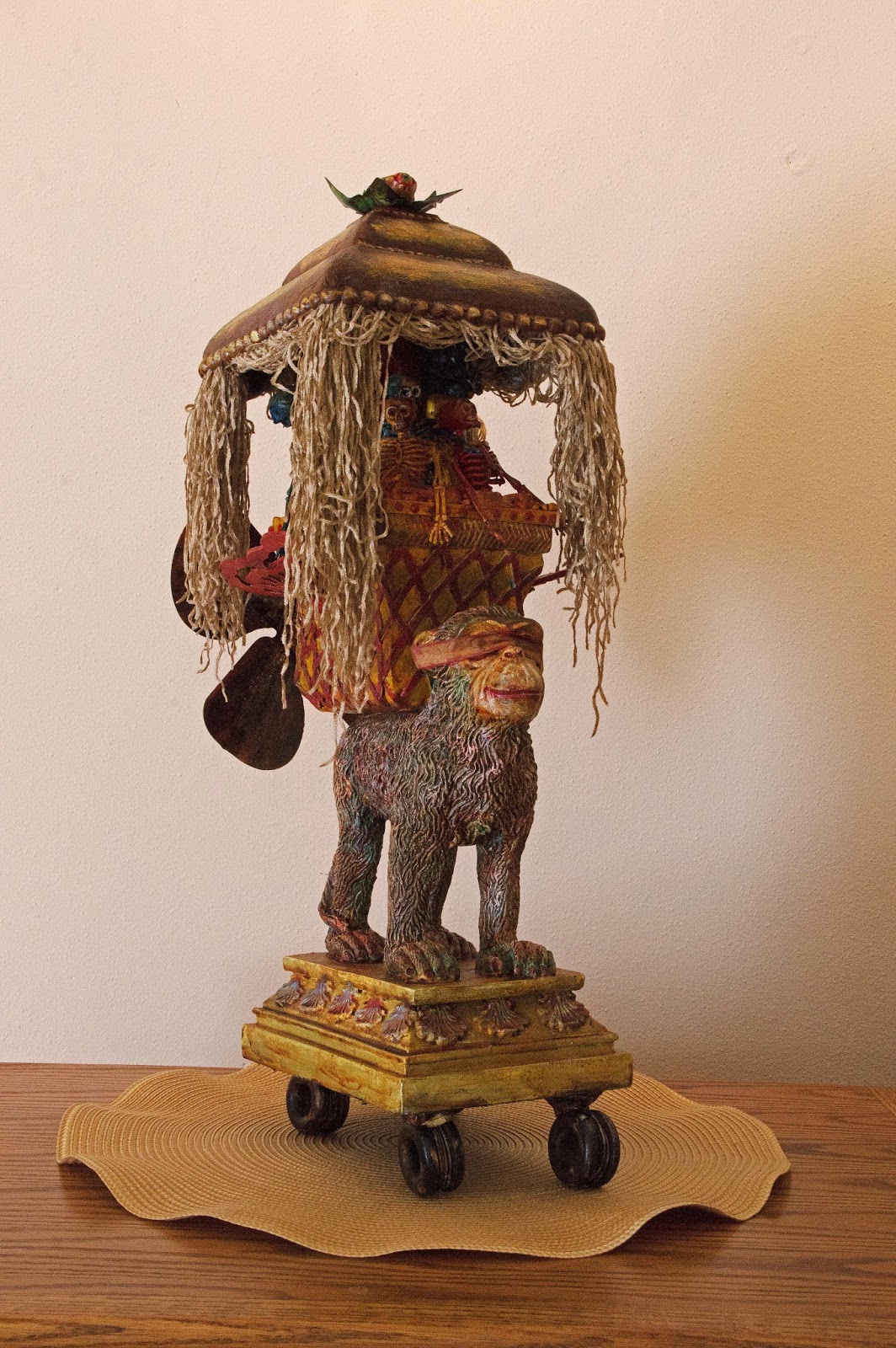 Posted by gary warren niebuhr at 6:10 PM No comments: