Junkin' Central Wisconsin with My Relatives

Today my sister Barb invited me to join her and my brother-in-law Bob on a junkin' adventure in central Wisconsin.  Barb and Bob live in Crivitz, WI, and they drove south west to Berlin while I left Milwaukee and drove north west.

I got to Berlin about an hour before the Crivitz crew so...I went junkin.'   I hit a small thrift center that had nothing for me but then I went to what looked like an old grocery store.  It was a thrift center run by Lutherans, this is most certainly true.  I bought a skeleton head, a serving dish and the Avon wedding couple.  Total cha-ching: $2.00 American. 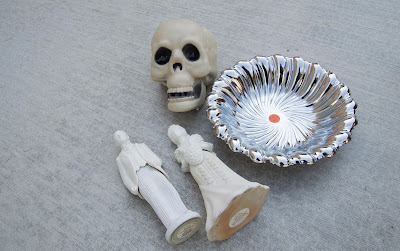 Our first group goal was Saving Grace Salvage (245 East Park Avenue, Berlin).  I mean, c'mon--look at this place.  How cool is that? 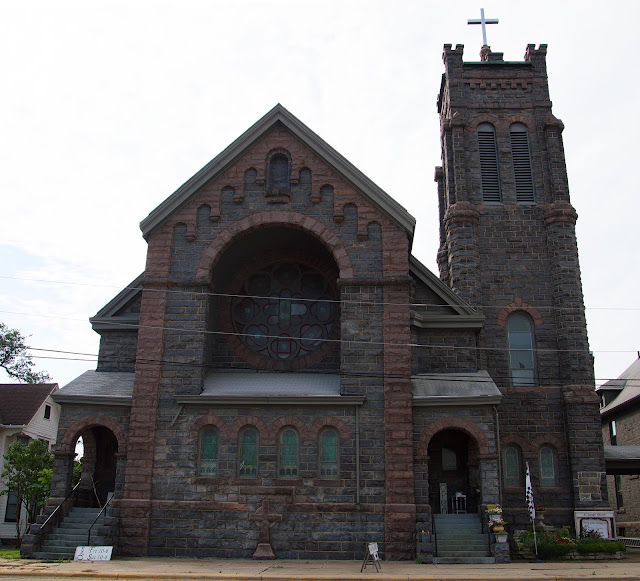 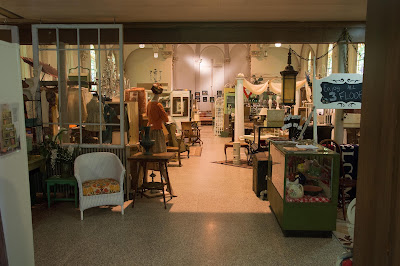 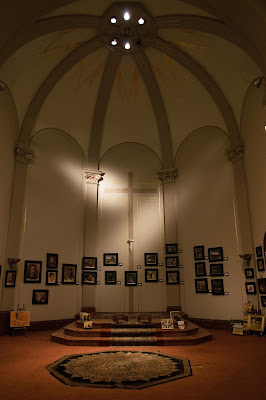 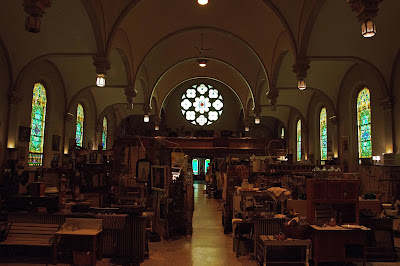 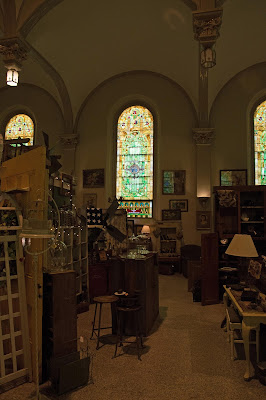 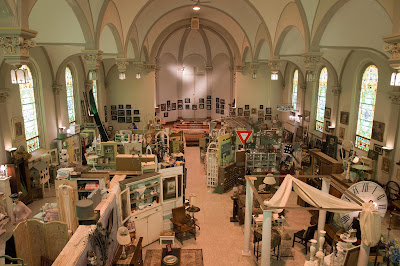 The first floor from the balcony 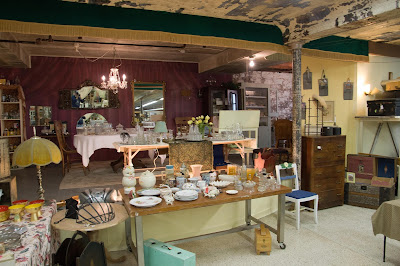 Saving Grace is clean and very well organized.  It is HUGE!  It also has fair market value prices--don't expect thrift store price tags here.  That being said, I did find some things I was willing to pay for.

Here is what I got. Three shutters (a dyptich and a triptich), a sewing machine drawer, three small cigar boxes, a metal thing that looks like a helmet, a vintage can, five metal frames and three books from the turn of the 20th century.  Total cha-ching:  $78.00 American. 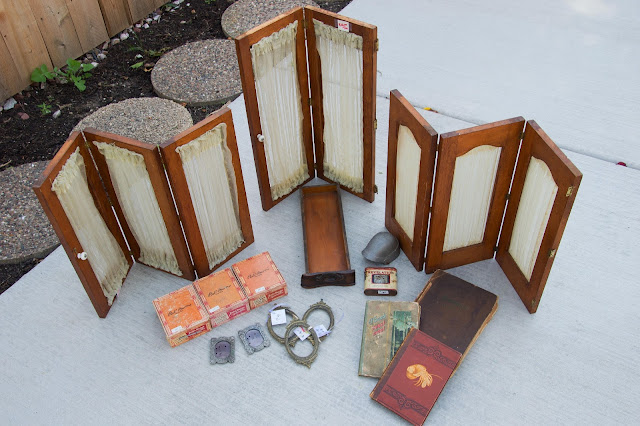 Next we carpooled down the road to Omro, WI.  We stopped at a farm where Barb bought a pumpkin but a bought a bundled bunch of corn stalks to make paper.

We stopped at Farm Wife's Country Store.  This is a craft and food store but outside in the elements the shopkeeper had these three items she was willing to sell:  two strawberry caddies and a sewing machine drawer.  Total cha-ching:  $10 American. 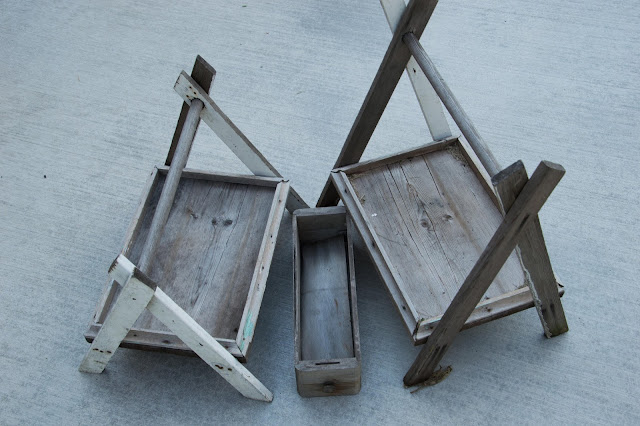 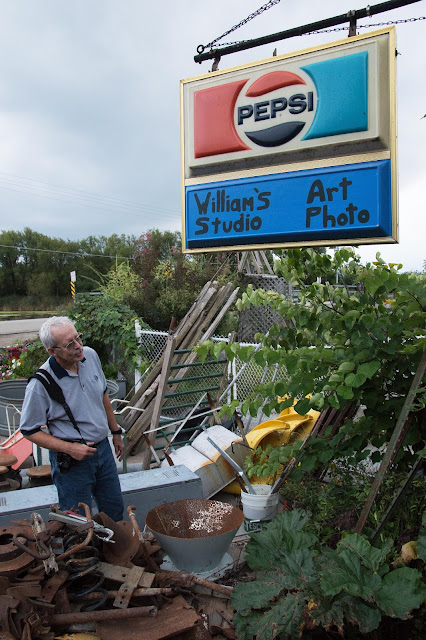 Bob checking out the sign.  "That could be interpreted a number of ways," he said.

Store has to be a euphemism for something like "junk outside along the highway."  To make matters worse, storms were on the horizon and William had covered most of his junk with tarps, showing an amazing amount of care considering the condition that most of the stuff was in. 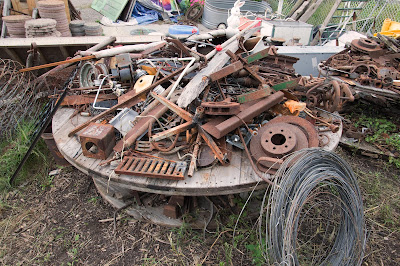 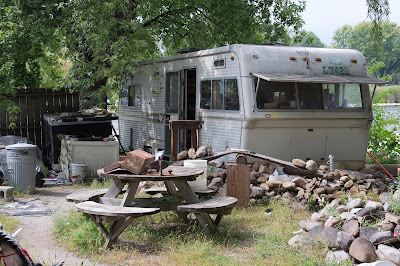 Yes, this was full of junk. 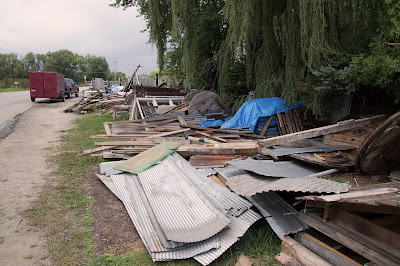 Sometimes junk can be very beautiful in a weird kind of way. 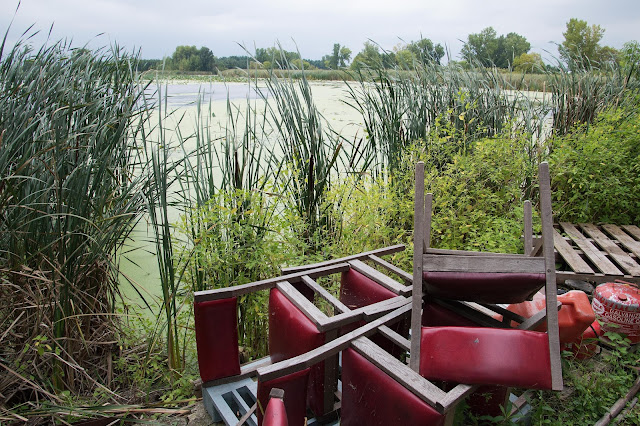 However, before I got really wet, I did manage to snag three parts of a cow watering mechanism and part of a horse harness.  Total cha-ching:  $18 American. 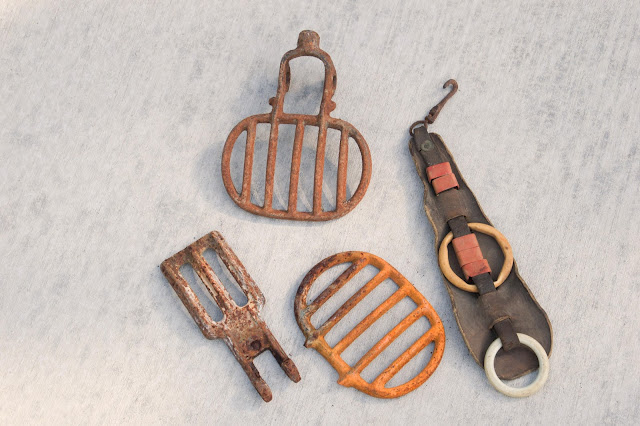 All in all, it was a fun day and I got to see a few assemblage sources that I was not familiar with thanks to my enabling sister.  Thanks, Barb.

Posted by gary warren niebuhr at 6:41 PM No comments:

Here are my tips for assemblage artists in the southeastern portion of Wisconsin who are looking for good sources of junk for their art.

My personal preferences are flea markets, auctions and estate sales.

In my opinion, the two best flea markets in our area are Elkhorn and Cedarburg.

The Elkhorn Flea Market is the largest and the best.  It happens four times a year at the Walworth County Fairgrounds.  The last one of 2016 will be September 25th.  The 2017 dates are on their website.  Vendors and attendees will tell you that the prices are higher here than other flea markets because of the proximity of Chicago but I have always found stuff to buy at a price that I can afford considering I am going to do weird things to the stuff I buy.

The Cedarburg Maxwell Street Days take place in Firemen's Park in Cedarburg four times a year.  The last one of 2016 will be October 2nd.  Vendors will tell you that they ask less here than they do in Elkhorn but Cedarburg also has more rummage type dealers which can be interesting.

I don't do much rummage sales because it is so hit or miss whether I will find anything for all the time I put into it.

I like going to auctions--for me they are as entertaining as watching a TV show or a sporting event.  My favorite auction to go to Julie's Antique Auction at Cliffords on Forest Home Avenue near Hales Corners.  Be prepared--these auctions are marathons.  They start at 6:00 p.m. and can go as long as Midnight.  That's right--Midnight! They just had one this Monday and I came home with the following for a total of $32.  And I got home at 12:20 a.m. Tuesday morning. 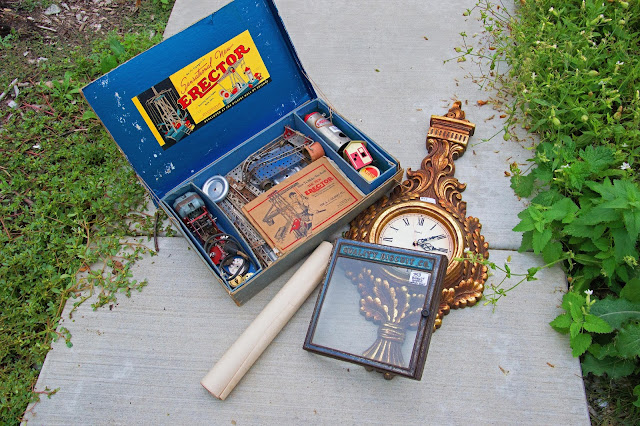 The Sunday Milwaukee Journal is the best source for listings of estate sales and rummage sales in our area.  For whatever reason, the listings are in the "Jobs" section of the want ads.  Anther way to find estate sales in our area is to use Estate Sales which can be regionalized by zip code and milage.  It just depends on how far you want to roam to find good junk.

In my opinion, I find estate sales to be more valuable than rummage sales.  For one thing, estate sales mean everything is for sale, not just the junk the family has decided to get rid of.  The second thing is I like to wait until the last day and shop the bargains when the estate sale folks are more willing to bargain and stuff can be bundled into deep discounts.

Let me tell you a tale of a recent estate sale adventure that I had.

From an add in the paper, I went to an address on the East Side of Milwaukee that sounded promising.  By the time I got there I was only interested in these eight frames for $5.  Still, not a bad purchase. 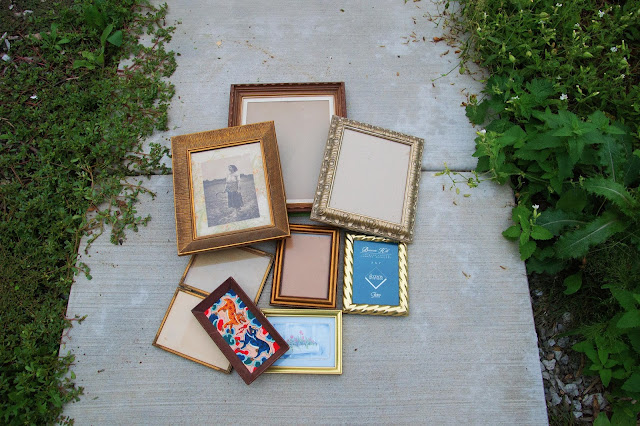 On the way home, by sheer serendipity, I went down a street in West Allis and found an estate sale advertised on the street that was NOT in the Journal.  For $25 I got all of this--sometimes it is just a good thing to be in the right place at the right time. 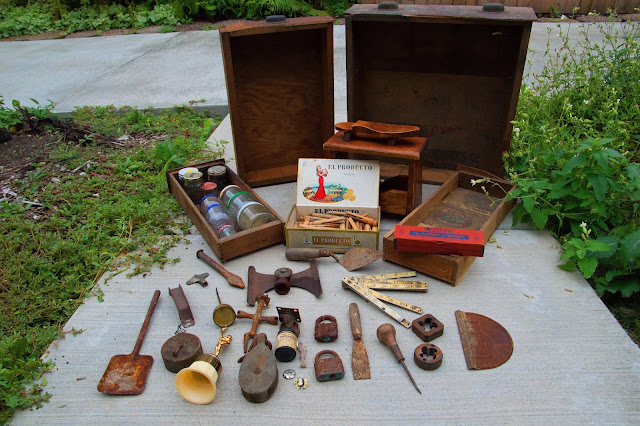 At the last estate sale, I passed on the canning shown below--what do you think? 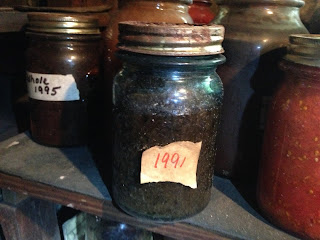