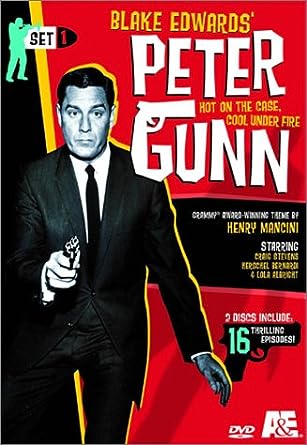 I decided to explore the two volume DVD set I got called Blake Edwards' Peter Gunn:  Hot on the Case, Cool Under Fire put out by A&E.  This appears to be season one of the television series which eventually ran for three years and 114 episodes.  However, the boxed set has only 32 of the 38 episodes from season one.  Go figure.

Blake Edwards was an idea factory who worked in the entertainment business for years with great success.

Blake Edwards went on to direct great films:  Operation Petticoat (with Cary Grant and Tony Curtis--one of my favorite comedies of all time); Breakfast at Tiffany's;  Days of Wine and Roses;  all the Pink Panther movies and Victor Victoria which starred his then wife, Julie Andrews.  Oddly, this great creator spent the last fifteen years of his life battling chronic fatigue syndrome and depression.  He died with a reputation locked in popular culture but with little respect for all that he accomplished--I think he should be far better remembered for his storytelling ability and his creative and comic genius.

He began his writing career in the late 1940s and had success with a number of projects which led to him creating Richard Diamond, Private Detective, a radio program starring David Janssen that ran from 1949 to 1953 before transferring to television from 1957 to 1960.

Peter Gunn was developed as a cool P.I. who works in an unnamed urban city filled with crime lords.  The filming style was film noir.  Besides Edwards huge contributions in many areas, the show had various writers and directors with the most famous director shot (ep. 3–28: "The Murder Bond" (April 24, 1961) was done by Robert Altman.  The show ran on NBC from September 1958 to September 1960 and then ran on ABC through 1961.

The actor selected to play the part was Craig Stevens. Craig Stevens was never a major actor but did work film and television for a number of years.  Gunn was his major claim to fame.  He married the gorgeous actress Alexis Smith in 1944 and contrary to most Hollywood marriages, the couple lived together until Smith died of brain cancer in 1993. 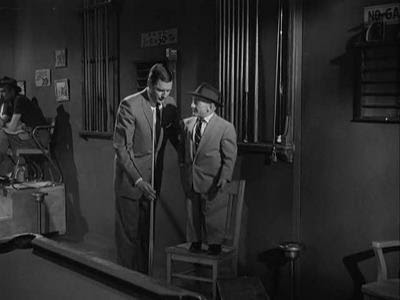 Stevens brings a tone to the acting that helps keep the sardonic nature of the character within the oeuvre of the P. I. as developed in pulp literature and Hollywood movies.  He keeps it from getting to campy but never rises above television series acting during season one. 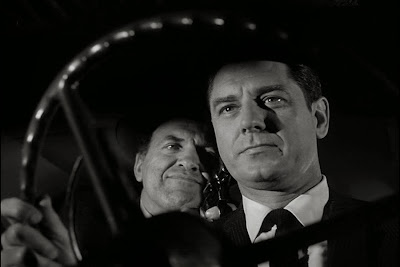 Gunn is so cool that he spends a great deal of time hanging out in a jazz nightclub called Mothers.  Mothers is owned by Mother as played by Hope Emerson. Hope was unique in Hollywood at that time as she was a towering 6' 2" tall and weighed 190 lbs. which meant she looked huge even next to Stevens. Gunn's girlfriend is Edie Hart played by Lola Albright.  She is the house singer at Mother's.  In her personal life she was married three times.  Her second marriage was to the famous actor Jack Carson but eventually she married Bill Chadney and they stayed married for 14 years.  The interesting thing about that was that he was the on camera pianist, Emmett, in the house band at Mother's.  Although in 42 episodes, he was not always listed as a cast member when he was on the set.  But hey--he got to go home with Edie every night and Peter Gunn never did.

This might be a time to talk about the sensibilities of this show.  It is not "modern" in its outlook and in some cases, including Edie's role on the show, it reeks of 1950s attitudes.  Edie's job basically is to be the passive--aggressive victim of Peter's inability to commit.  However, the show does have an inter-racial cast at times, especially with the music.  But it then can turn around and be badly racist as it is when they need a sinister Asian character for one episode.

Each week the show is filled with characters who will appear just in that show and their faces are also familiar.  At least in the 32 episodes I watched, there is no real fire power like I have seen in Combat! or The Naked City. 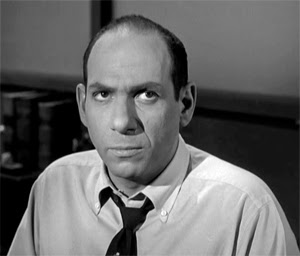 The police presence is provided by Lt. Jacoby played by Herschel Bernardi.  His face may be familiar to you if you have watched a lot of vintage TV, but Peter Gunn was the only show where he got an Emmy nomination.  His most famous role is one unknown to most:  he is the voice of the Jolly Green Giant's "Ho, Ho, Ho."  He did have two season on TV in Arnie as the lead character.  He also spent many nights on stage as Tevye in Fiddler on the Roof, being the original replacement for Zero Mostel.

As an actor on the show, he has his moments of pathos wherein you can see the trained actor struggling to bring some believability to his role as a world-weary cop. Mothers is a jazz club and is lucky enough to have a club band that plays the music written or compiled by Henry Mancini.  Of course, we all can hum the memorable and very popular Peter Gunn Theme,  which won an Emmy Award and two Grammys for Henry Mancini.  John Williams (yes, that John Williams) is the pianist working on the Mancini music and played the piano on the show's theme.

A year after the debut of Peter Gunn, the jazz private eye continued with Johnny Staccato which managed only to stay on the air for 27 episodes, but they are great.  Starring John Cassavetes (who also directed five of the episodes), it is great noir stuff and has equally powerful jazz music.

Ultimately, I am glad I watched season one but I have no desire to watch the rest of the shows because there was a similar nature to all the episodes.  I thought that The Naked City was much better as a piece of entertainment.  But I like vintage TV, black and white, noir and these vintage cop dramas so I did not waste my time.  Besides, this may be some of the best music ever on television.