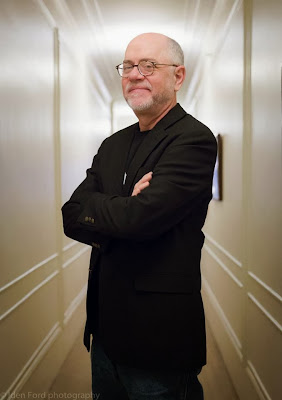 This year, for the first time, the con moved from its previous home in Muncie, Indiana, to the confines of the Columbia Club in downtown Indianapolis.

I volunteered to drive so bright and early on Friday, October 25th, Ted and his wife Maggie Ley showed up at our house with their special house guest, Ted Fitzgerald from Boston, henceforth known as Ted the Younger.  Ted has flown into Milwaukee to join us on convention excursions before so this definitely added a sense of old home week to the experience.  Our fifth for the weekend was my lovely bride Denice.

The drive from Milwaukee to Indy is five hours if you do not get held up by Chicago traffic.  We made a short stop on the campus of Purdue University in Lafayette, Indiana, for lunch.  Arriving in plenty of time to attend the afternoon sessions, the first thing I did was blow off the programming.

If I miss anything about the cons, it would be the people.  On Friday I was able to touch base with some very special long lost friends:  Indiana author Terry Faherty and the Florida plucky couple of Sandy Balzo and Jerry Healy.  That night, joined by Terry's wife Jan, the nine of us dined at Palomino's in downtown Indy where we had a great meal and plenty of conversation.

To my great surprise, once registered, the convention decided to use me up on programming.  I was a tad reluctant going in but as it turned out, being on panels is like riding a bicycle.

The first panel was called Why PIs Are Still Cool.  I got Ted the Younger to join the panel in the hopes that I would not have to be on it, but the moderator Parnell Hall talked me into staying on in the hopes I would have questions as he (kidding) claimed to have none prepared.  The rest of the panel was made up of Canadian author Anthony Bidulka, Minnesota's Carl Brookins, and Jerry Healy.

The second panel was in the next time slot and was called Manuscript to Movie.  This was another panel I was shy about being on but decided I would take the librarian/viewer perspective and talk about films were the book and film matched, cases where the film was better and, of course, instances where the film sucked and people should just read the book.  The moderator for this panel was Jerry Healy and the fellow panelists were Boston's Hank Phillippi Ryan, Canada's Maureen Jennings and John Gilstrap.  Hank and I hit if off on this panel as she and I were the two who had nothing to do with Hollywood, screenwriting or film.

The lunch was spiced with an interesting interview of the conference guest of honor, Steve Hamilton, by Hank Phillippi Ryan.

In the afternoon I took part in a scheduled round robin discussion called Continuous Conversations:  Choosing Victims.  I was assigned to arrive at 2 with Terry Faherty and moved out at 2:45.  This was a unique "panel" and I had fun participating.  However, I was too shy to say anything (yea--right!).

The next panel slot was my time to moderate.  I was the host of a panel called Critics and Reviewers: Friend or Foe?  When I first got this assignment I wondered if the conference programmers meant were critics friends with reviewers (ha ha) but I did manage to think of a series of questions that keep it flowing.  My panelists were Kate Stine, owner and editor of Mystery Scene, Molly Weston, and Ball State student named Brendan and both Ted the Elder and Ted the Younger.

The banquet this evening featured a very moving speech by Hank Phillippi Ryan in which she encouraged all to tell their own stories.

This was followed by a gameshow called World's Second Greatest Detective in which the number one slot is conceded to Sherlock Holmes.  Hosted by Parnell Hall, the panelists were John Gilstrap, Dorothy Cannell, John Desjarlais, Carl Brookings, Ted the Elder and me.  The idea was that in each round we were given an era, a location and a weapon.  The panelist were then given two famous detectives and asked to opine about who would be the better detective and solve the case.  While some might have tried to take this all serious, I found myself acting like a hard-boiled detective (Shell Scott), showing everyone where Amelia Peabody would have a tattoo of an Egyptian cat and speaking in Swedish (Lisbeth Salander). No, I do not speak Swedish.

Terry, both Teds and I then retired to the bar to watch the World Series.

Sunday was a lazy day for me as I had fulfilled my role on all the panels I was assigned to.  I went to hear by friend Sandy Balzo on her panel, Is Cozy the New Romance?  Then Ted the Elder, Sandy and I (the former members of the writer's group, The Noirsketeers) sat around and talked the rest of the morning away.

All the photos in this column are from the Magna Facebook page and were taken by Iden Ford, husband of Maureen Jennings.  He is a good photographer, isn't he? 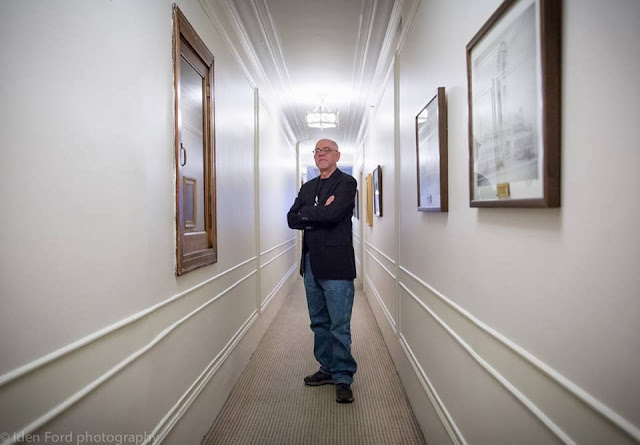 P. S.:  This is a photo from the camera of Terry Faherty and it shows
Sandy Balzo, Ted the Elder, Gary the Grey and Ted the Younger 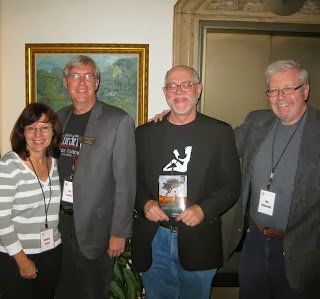 Posted by gary warren niebuhr at 5:49 AM