No One Is Left to Bear the Rain of Stones

No One Is Left to Bear the Rain of Stones

It is time again to be inspired by an online workshop by my mentor, Michael deMeng. This workshop is called Master of Disguise and it is a mask making tutorial. I will probably make more masks but when I started No One Is Left to Bear the Rain of Stones it just took off all the way to the finish line.

The first mask that I worked on was a cheap plastic mask from the costume store. I hardened the mask with plaster cast material in order to be able to do the things to it that I wanted. 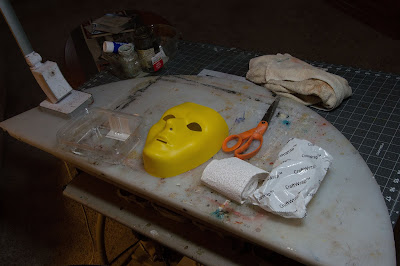 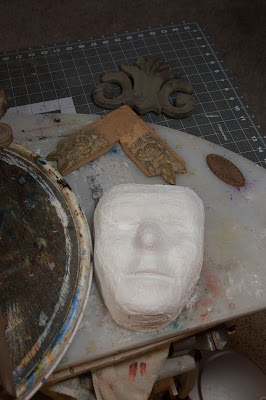 At the same time, I went to an auction and bought a whole bunch of wood including some old clock body parts. 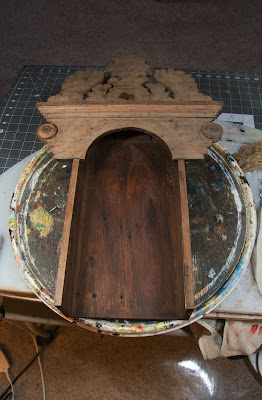 I was also reading a book, The Art of Mesoamerica by Mary Ellen Miller and when I saw this picture of Tlaloc, the Aztec Rain God, this project came into my mind. 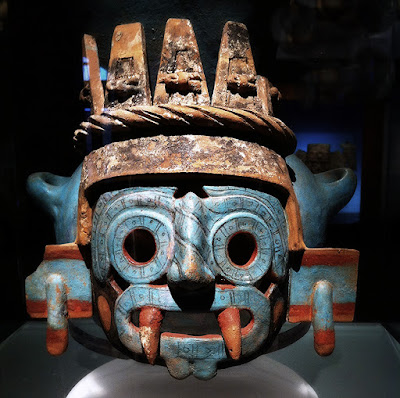 This sculpture of Tlaloc is located in the Templo Mayor in Tenochtitlan.  This information about Tlaloc is from the History Crunch website: "Tlaloc was an important god in Aztec religion.  In Nahuatl, the Aztec language, Tlaloc translates to ‘earth’ and modern historians interpret the name as meaning ‘he who is made of earth’.  The Aztecs considered him to be the god of rain, earthly fertility and water.  He was a popular god throughout the Aztec Empire and widely recognized as a ‘giver of life’.  The name Tlaloc is specific to the Aztec and their celebration of the rain god, however there is evidence of Mesoamerican people honoring a rain god going back to the city of Teotihuacan in the 1st century AD.  As well, the Mayans worshipped a god similar to Tlaloc.  While the Aztec considered Tlaloc to be a god that brought life, they also feared his wrath, because he also represented thunderstorms, floods, hail, and lightning.  Due to his positive and negative nature he is often pictured with rain, maize (corn) and lightning.  As well, his likeness is usually shown with goggled eyes and large fangs."

Here are a few more images from the web that I found that gave me inspiration: 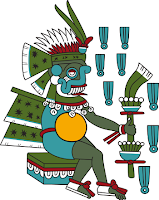 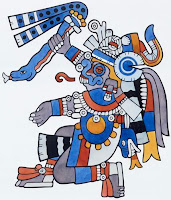 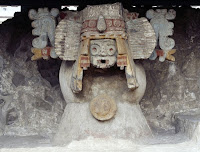 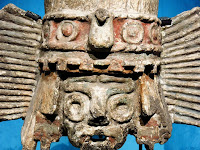 So, once I slipped the mask into the clock box with Tlaloc in my mind, it was pretty cool the way it actually worked for me. 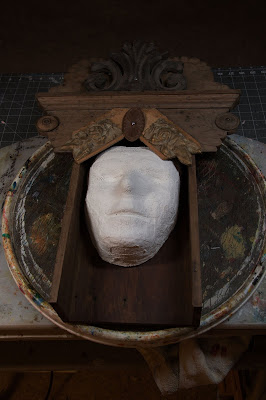 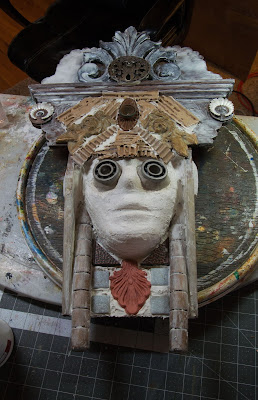 Then after a lot of painting, it was done. 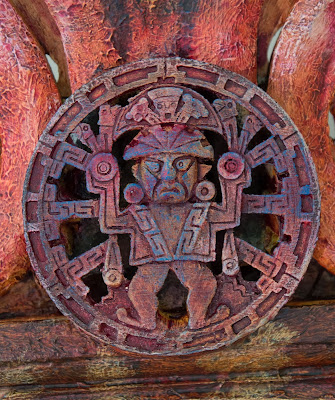 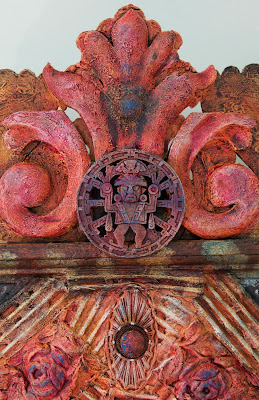 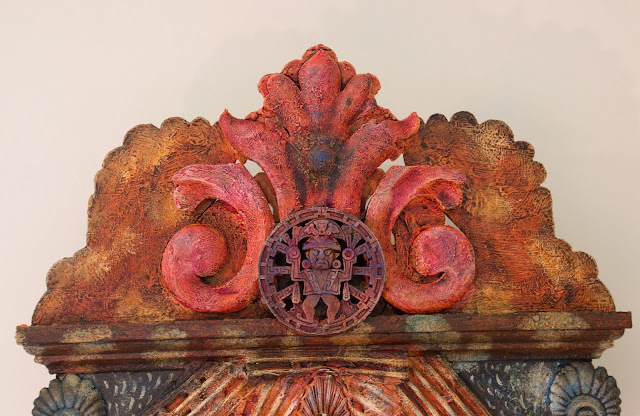 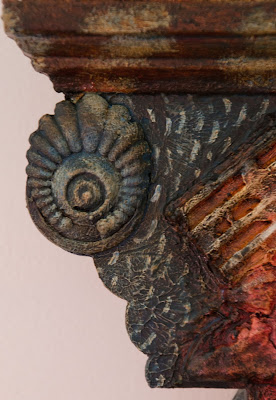 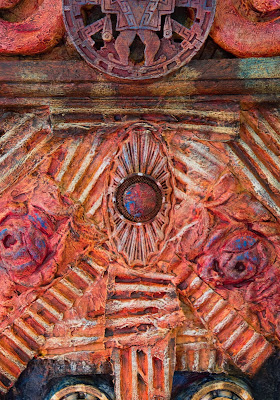 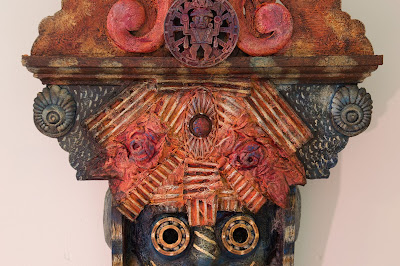 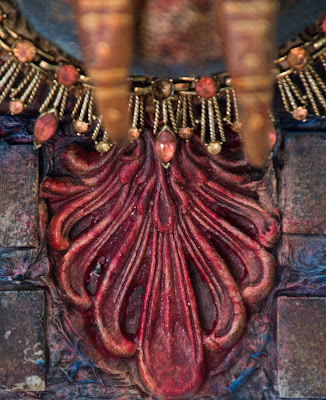 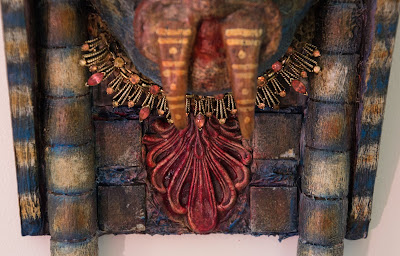 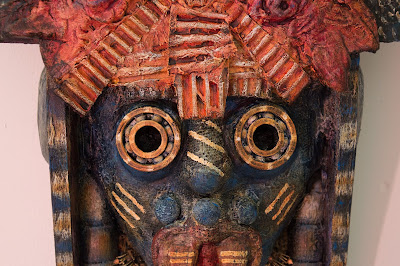 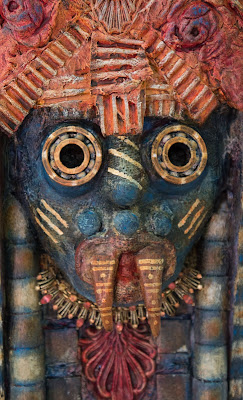 And, thus we have, No One Is Left to Bear the Rain of Stones. The title is from "Two Elegies, 2:  The Rain of Stones is Finished" from the collection The Rebel’s Silhouette: Selected Poems by Faiz Ahmed Faiz. 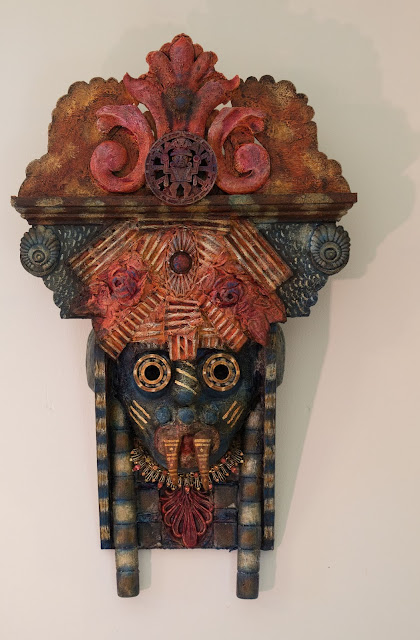 Posted by gary warren niebuhr at 11:32 AM