So, it is day 18, Sunday, July 10th, and all we want to do today is get to the Chicago lakefront and go home.  Illinois is not as thrilling as the west was for Mother Road interest, but it could also be blamed on a little bit of road fatigue on our part.

Leaving Bloomington, we knew today was another day that was just going to be about logging miles. After breakfast at McDonald’s, we on down the road to Chicago and the end of the route.

Shortly after vacating Bloomington, we are in Normal, a situation we have not always found ourselves in on this trip.  Next up was Towanda, Lexington, Chenoa, Ocoya, Pontiac, and Cayuga. At Odell, we stopped to take a photograph of an old restored Standard Sinclair gas station also known as the Odell Station. 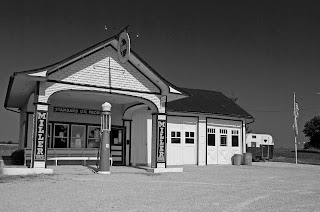 We were pedalling down the road to Dwight when a sign for a car show drew us like a magnet into a local park. 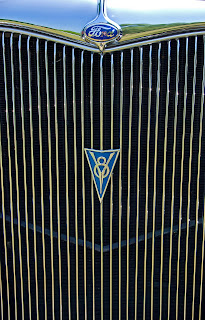 Next it was Gardner, Mazonia, Braceville, Godley, and into Braidwood where to our great surprise we once again found ourselves in the presence of celebrities. 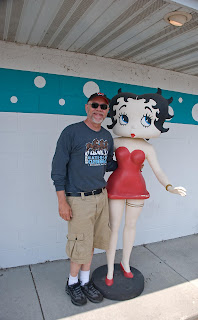 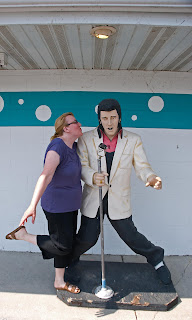 In Wilmington we found the Gemini Giant mascot at the Launching Pad drive-in. 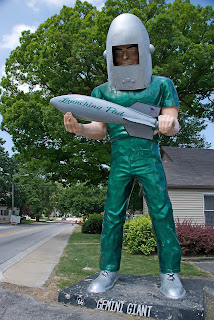 Through Elwood, Preston Heights, Joliet, Lidice, Romeoville, Bollingbrook, Willowbrook, Burr Ridge, Countryside, McCook, and onto Lyons where we had lunch at Culvers.

Now we are into the home stretch going due east to the lake through Berwyn, Cicero, and onto Odgen Street in Chicago. This turns to Jackson Blvd. and deposits Denice and I at Michigan Avenue.

So this may not look like much of a photograph to you but for Denice and I it represents accomplishing every mile of the Mother Road, Route 66. 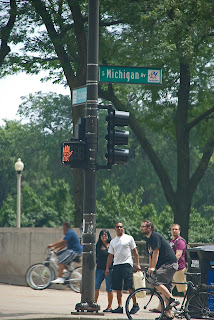 Miles back to our house in Milwaukee:  92

View the entire set of photos from this trip at http://www.flickr.com/photos/gniebuhr/
Posted by gary warren niebuhr at 3:25 PM