Under terms of full disclosure I must tell you that I did not go to bed until 4:00 a.m. this morning after downing a half 'o' hamburger at 1:30 a.m.  I compensated by not arising until 10:00 a.m.  I had a friend once tell me there were three things necessary to survive an event like this:  six hours of sleep, three meals a day and something I forgot.  Hopefully that will become evident as the days proceed.

Then it was off to The Grill for breakfast on my own. 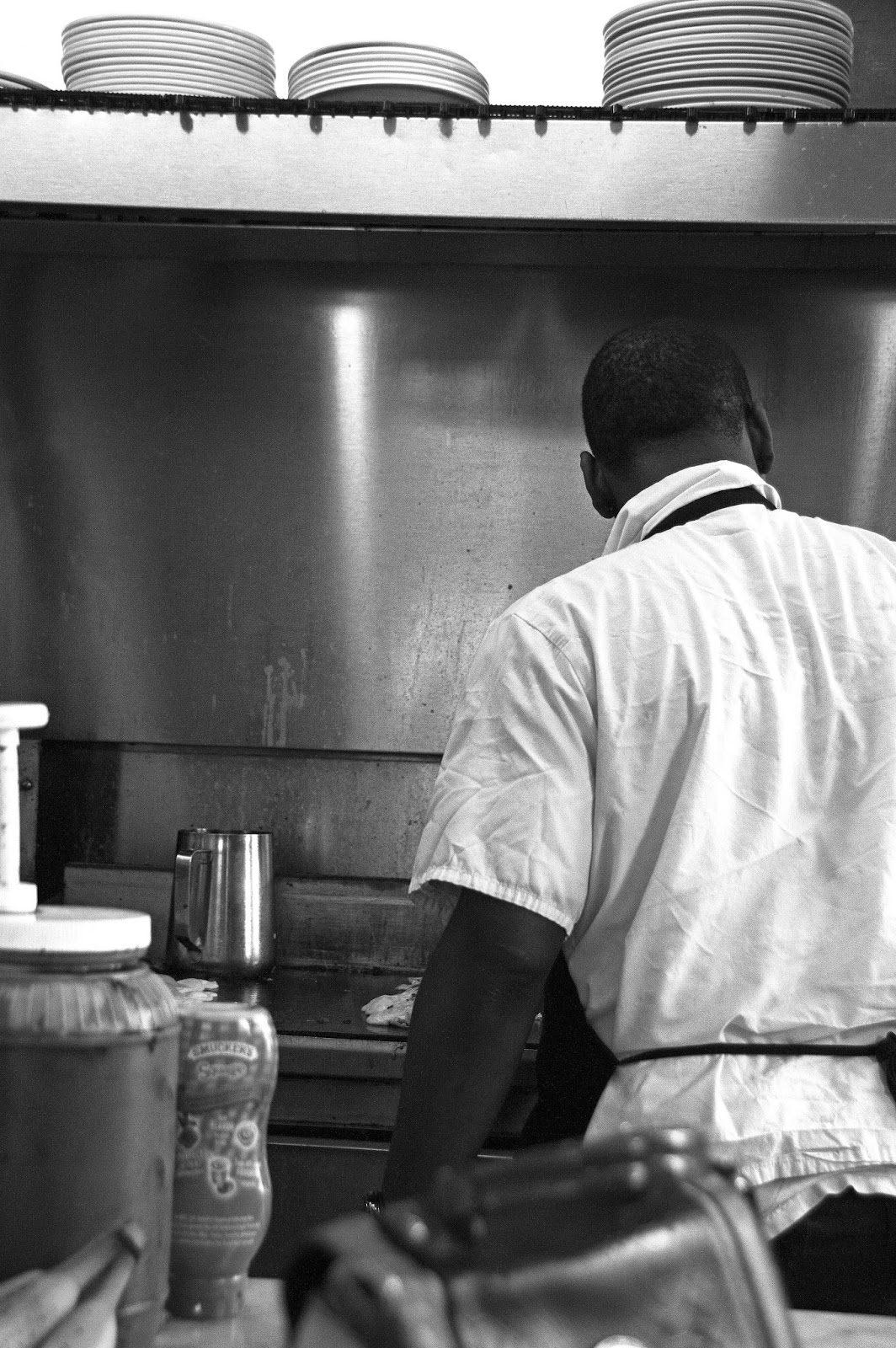 The Grill is one hoppin' joint where the wait staff, mostly African-American men, entertain with the dozens as they serve the food.  One poor foreign (but really cute) girl asked in accented English if she could "just get a peanut and butter sandwich" which drew the whole attention of all the staff including having the jelly holder dangled in front of her.  She took it in good spirit.  I ended up this morning with the only white waiter in the joint.  Before I left he had a run in with one of the customers and had to sign the written complaint against him which he did in front of me.  He then said, "I can't take it...they always complain about the only white guy in the place."  Then, he grinned like a son-of-a-bitch and went back to work.  I loved the drama and double tipped him.

My goal today was to go to the National World War II Museum.  The easiest way to get to the museum is to dive onto one of NOLA's two trolley lines.  For $1.25 per trip or $3.00 for an all-day pass, you can ride the trolley in two directions and get to a number of locations in the city. 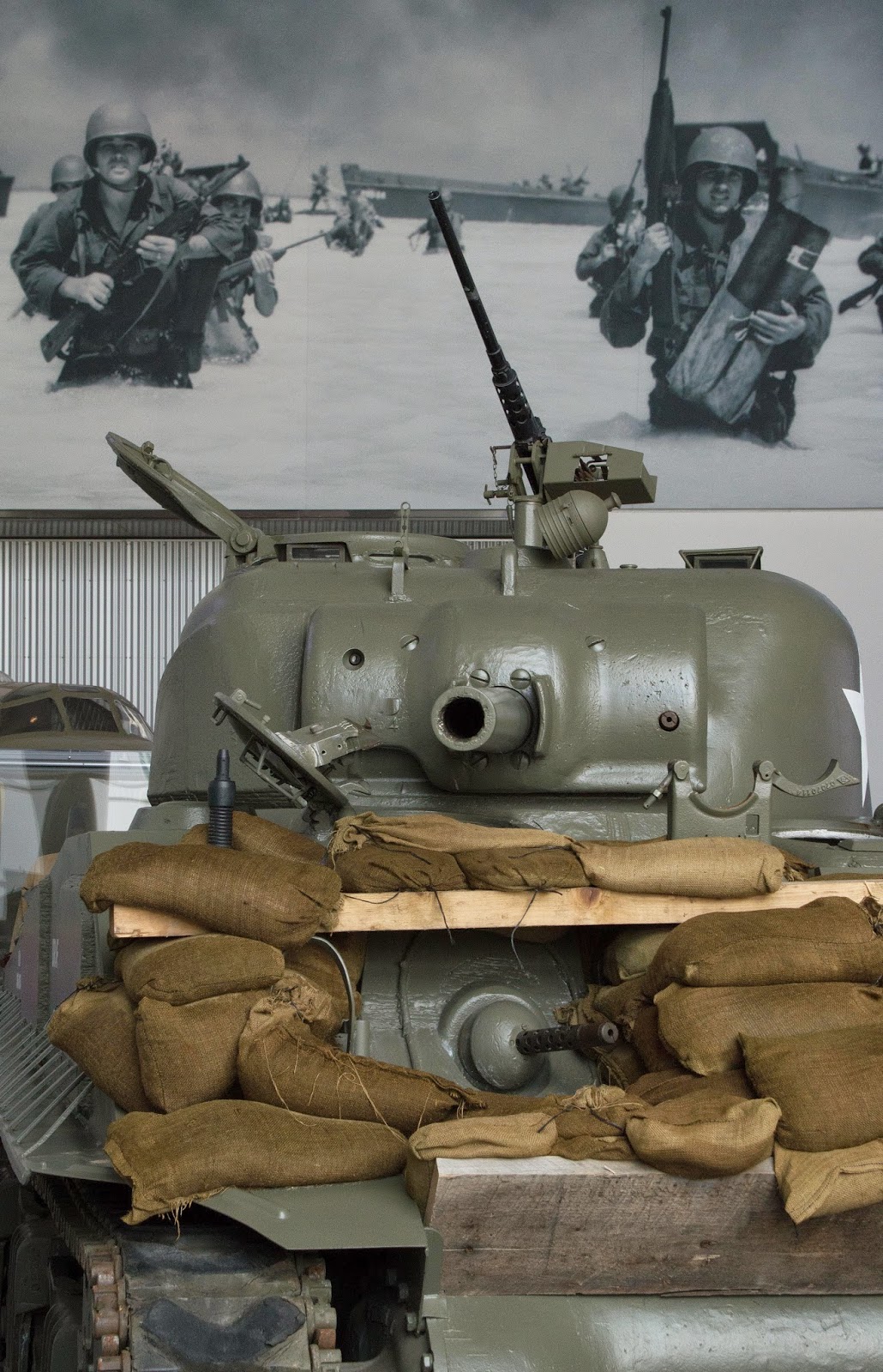 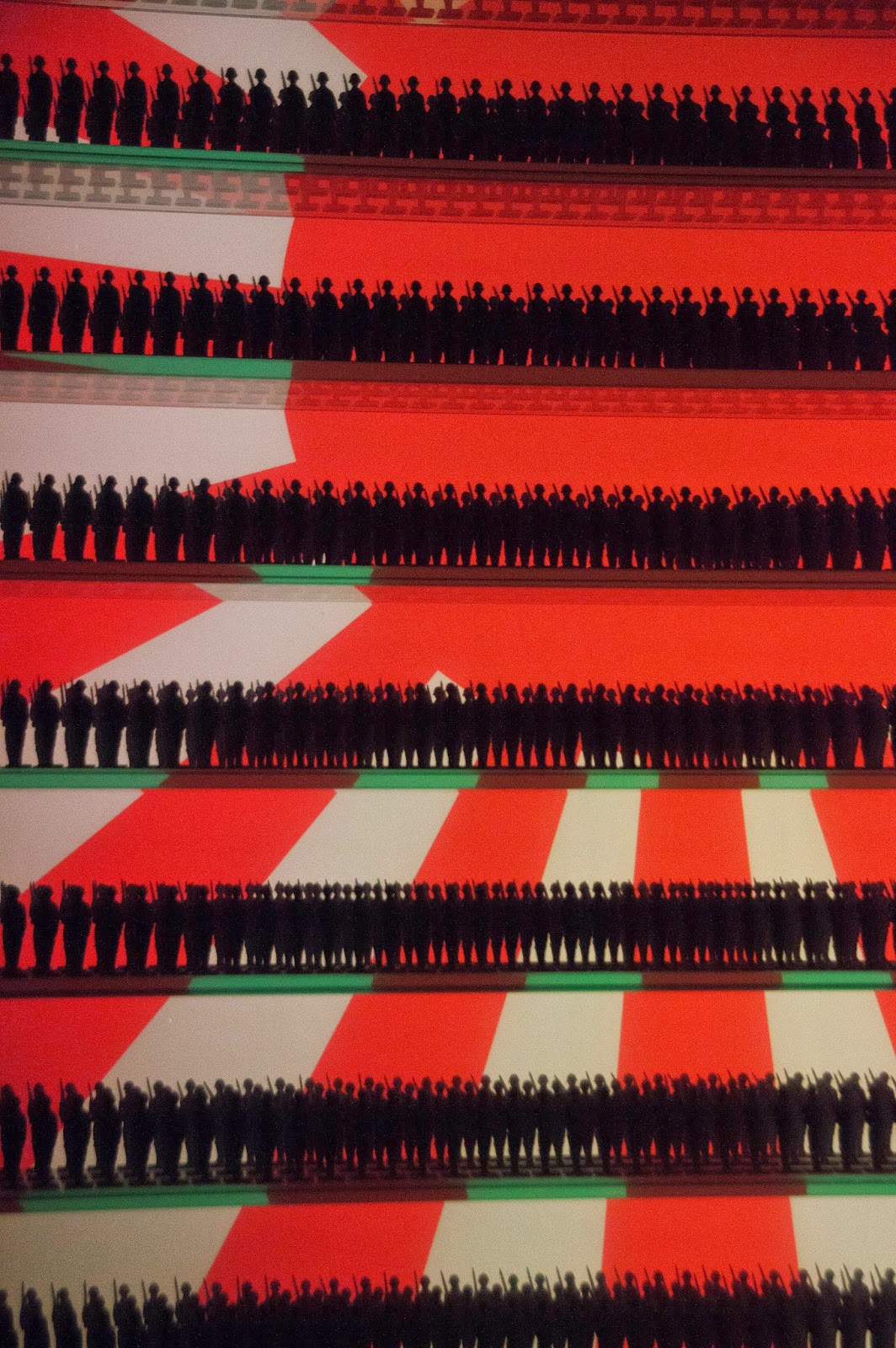 My experience at the WWII Museum was disappointing in a number of ways.  At the ticket counter I decided since I was going to be here all day I could buy a pass that would get me into the three main features:  the D-Day Museum, the Tom Hanks movie and the current Tang submarine exhibit.

And that is pretty much where it all falls apart. First, I went to see Beyond All Boundaries, a 4D film produced and narrated by Tom Hanks that uses "dazzling effects, CGI animation, multi-layered environments and first person accounts."  What this means is that you sit in a big theater ala Disneyworld and get entertained by a film like it is a big video game.  Just like some of the productions at Disney, you get rumbled in your seat--in this case when a tank goes by (I overheard one woman say as she was leaving she liked this "the best.").  Bright lights go off in your face and the surround sounds make you jump.  The other thing that happens to you is the film sort of make you forget that some where between 50 to 80 MILLION people lost there lives to make this piece of entertainment possible.  In my opinion, they would be better served to pipe in the smell of one dead body and it might have a more pacifistic attitude amongst the attendees.  (Don't even get me started on the rather anti-Japanese tone to the Asian portion of the film--a tone I thought was missing when discussing the Germans).

It got worse for me when I went to the Tang submarine experience.  When I was a kid all I read was accounts of WWII and so I was very familiar with sub service and the story of this boat in particular.  The Tang had five patrols in the Asian conflict area and sank more ships than any other submarine in the US fleet.  Unfortunately, on its last patrol, 78 of her crew were lost when one of its own torpedoes circled back and sank her.  Nine sailors survived only to be picked by the Japanese and tortured in a prisoner-of-war camp until rescued at the end of the war.

Expecting to see something along the lines of the German sub at the Museum of Science and Industry in Chicago, instead I had another video game thrust upon me with even worse and insulting methods.  Here, each attendee in the exhibit is given a baseball card representing one of the dead men on the sub and then you are assigned to his station to recreate what he did before he drowned in the Pacific ocean.  Pitiful and embarrassing and certainly no way to honor the memory of the dead.  (Sorry--thanks for listening). 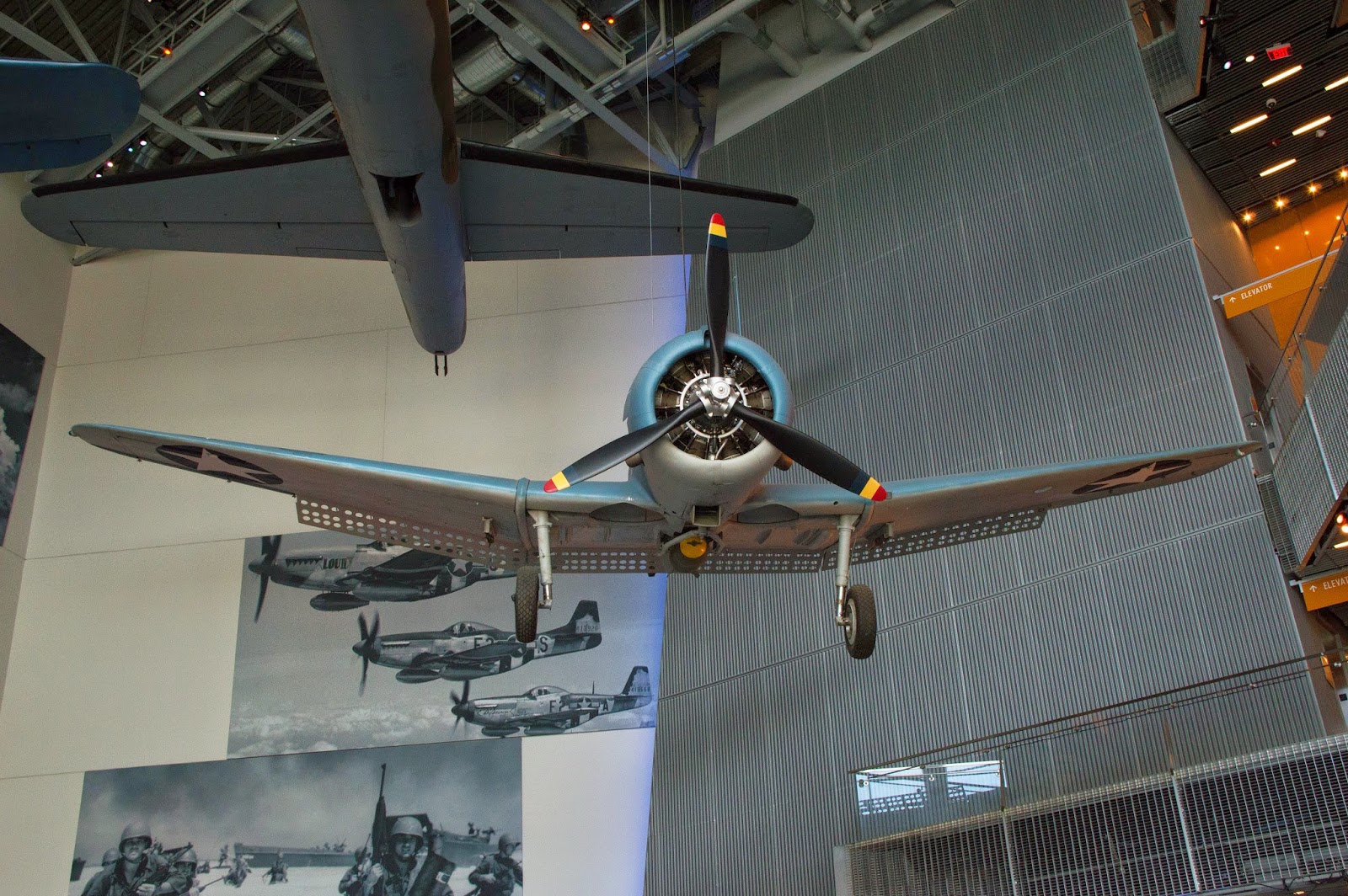 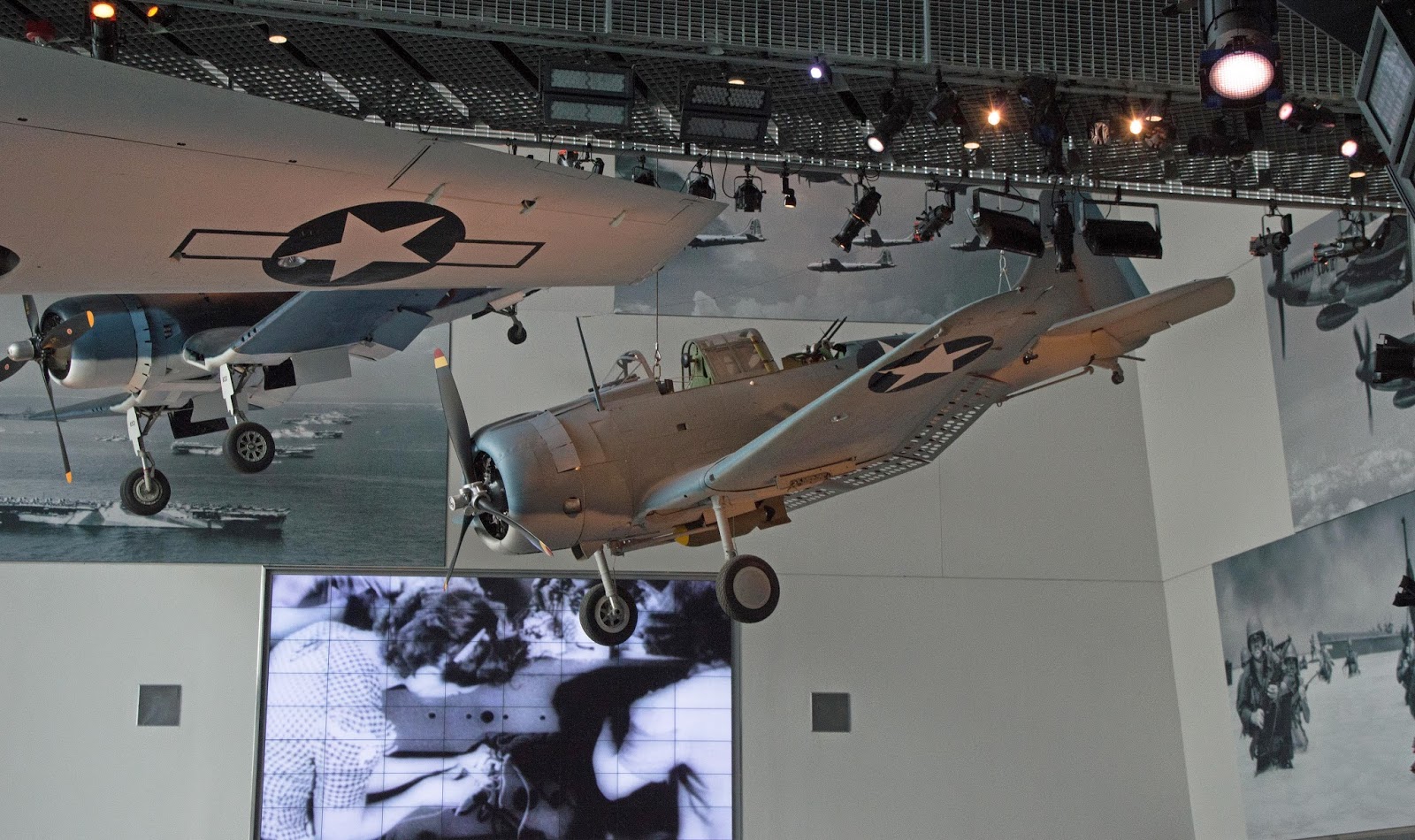 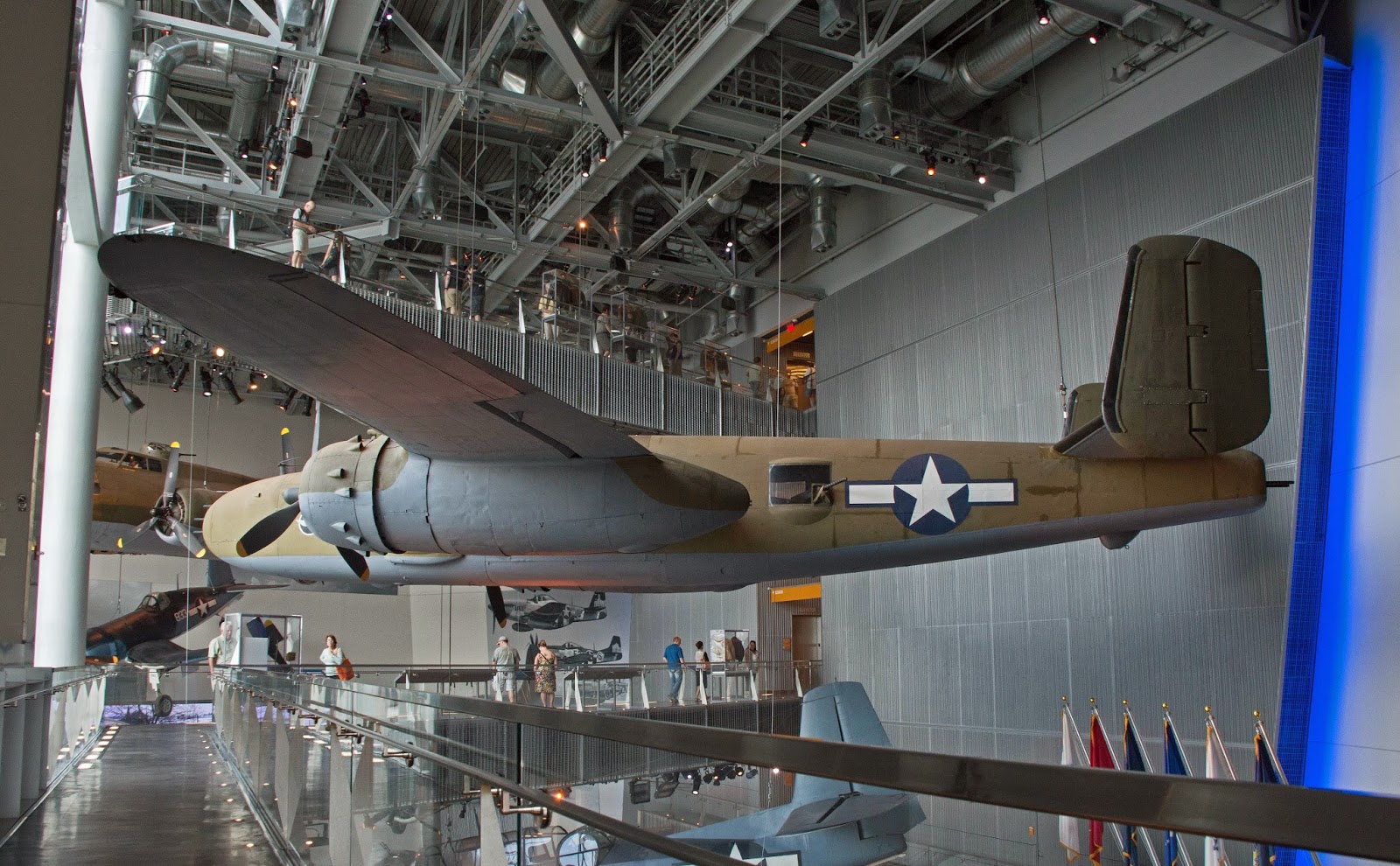 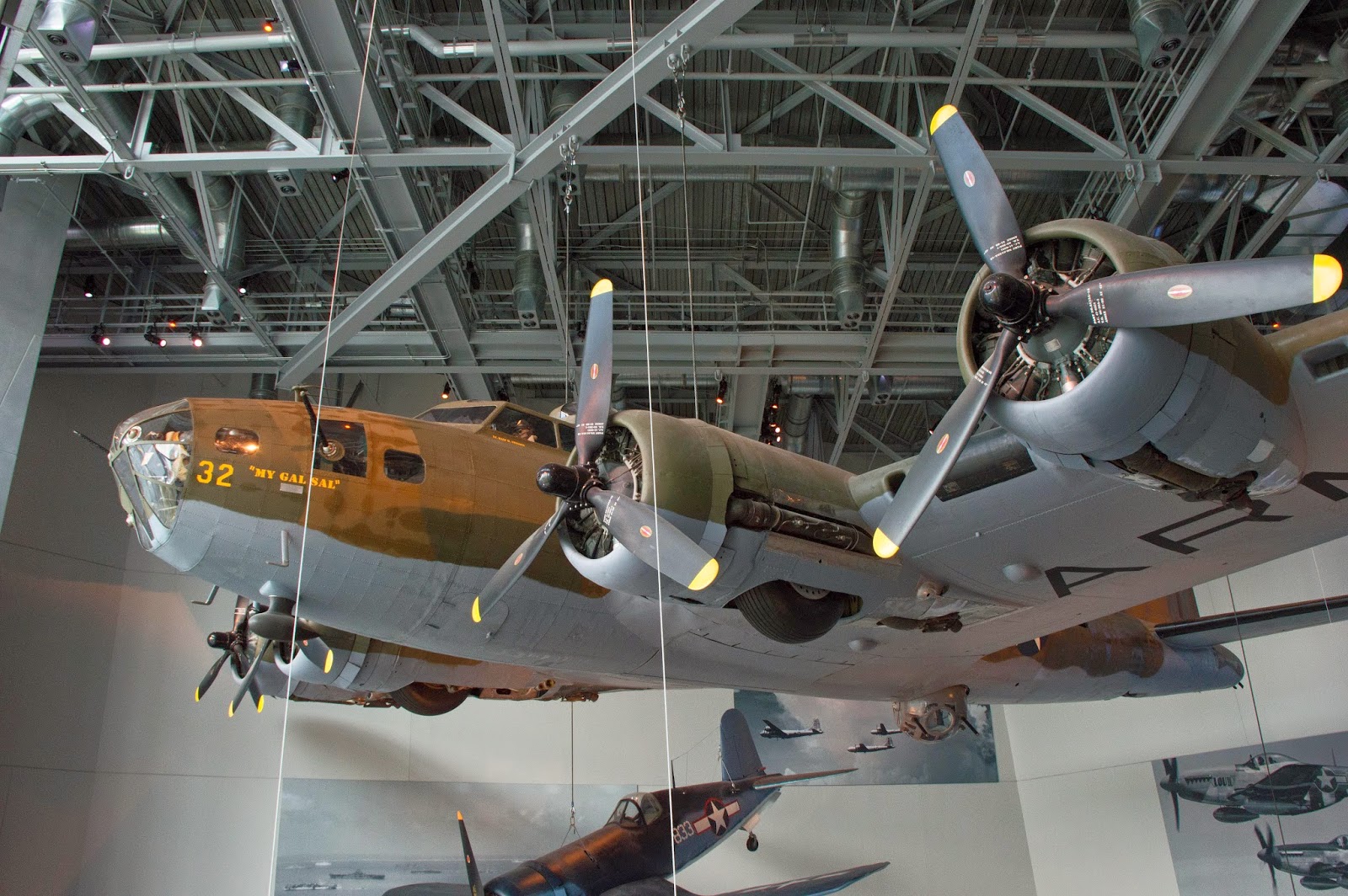 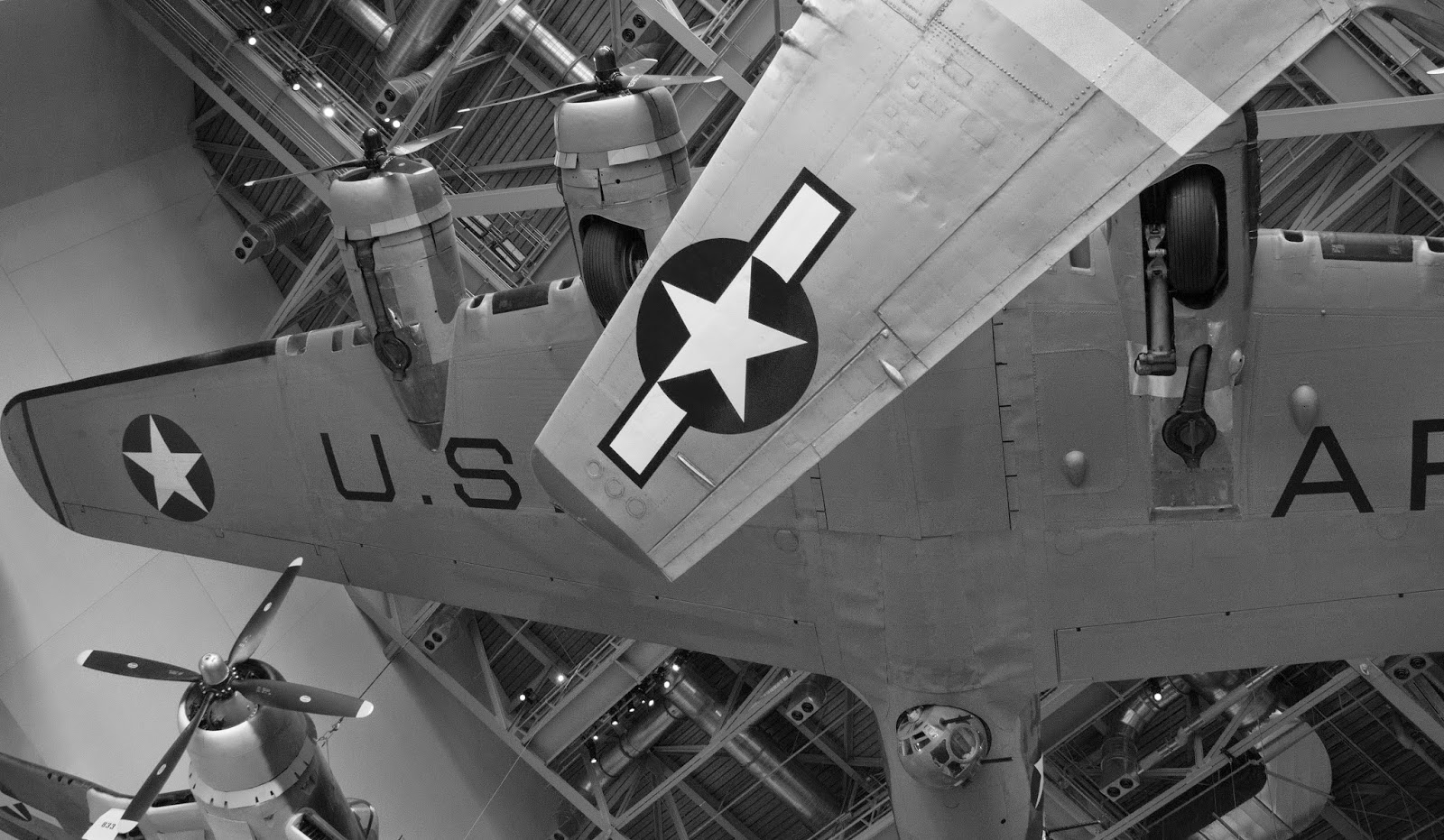 The actual exhibit space in the D-Day portion of the museum is adequate but I liked the planes best.  You can walk floors up to be among them and that was pretty cool. 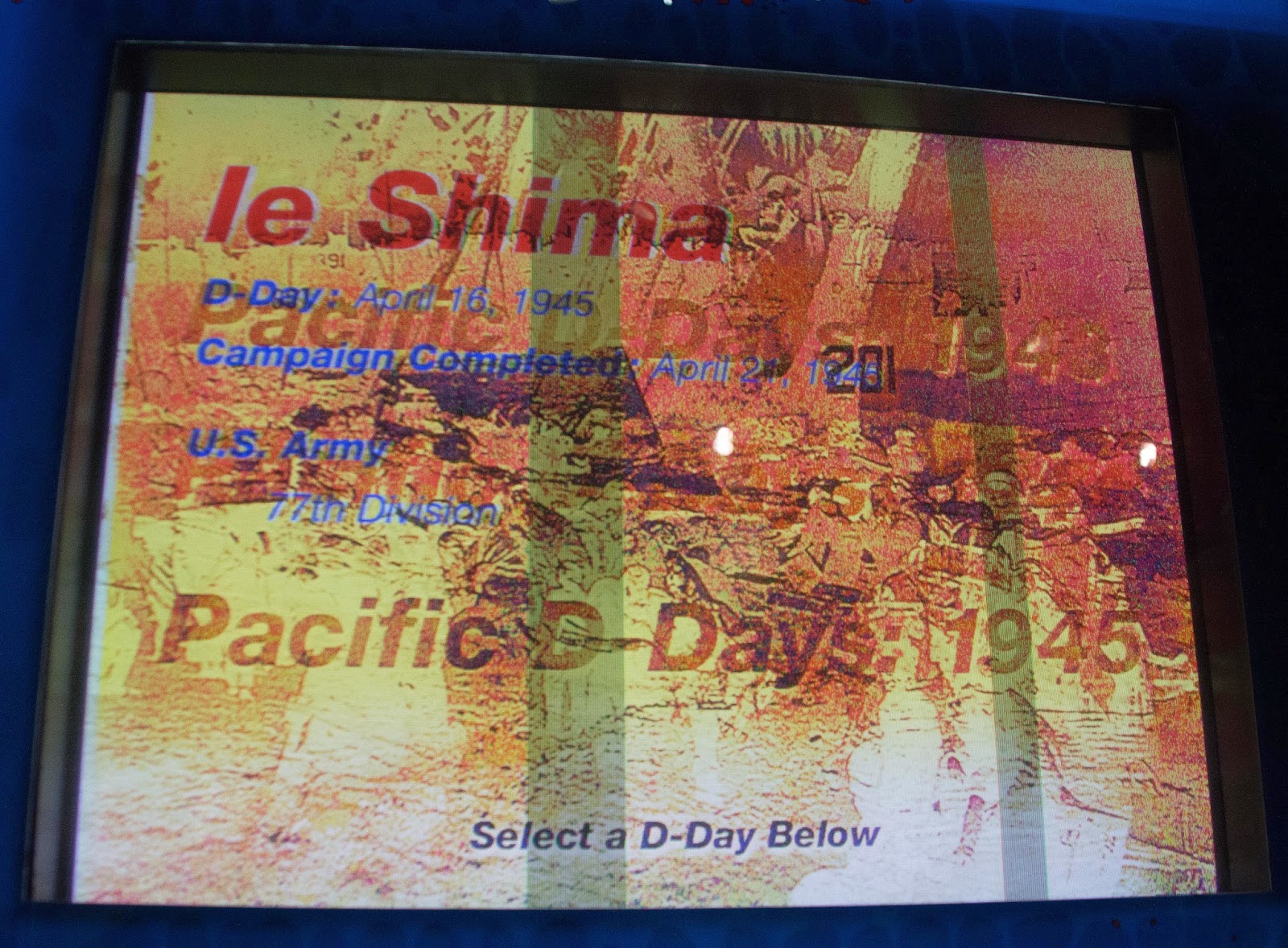 I was able to find an interactive screen in the Pacific portion that allowed me to find the battle that my father served within during his stay in the Asian zone.  I got all worked up here to and maybe this whole thing is just a bad idea because I found myself thinking about my Dad. 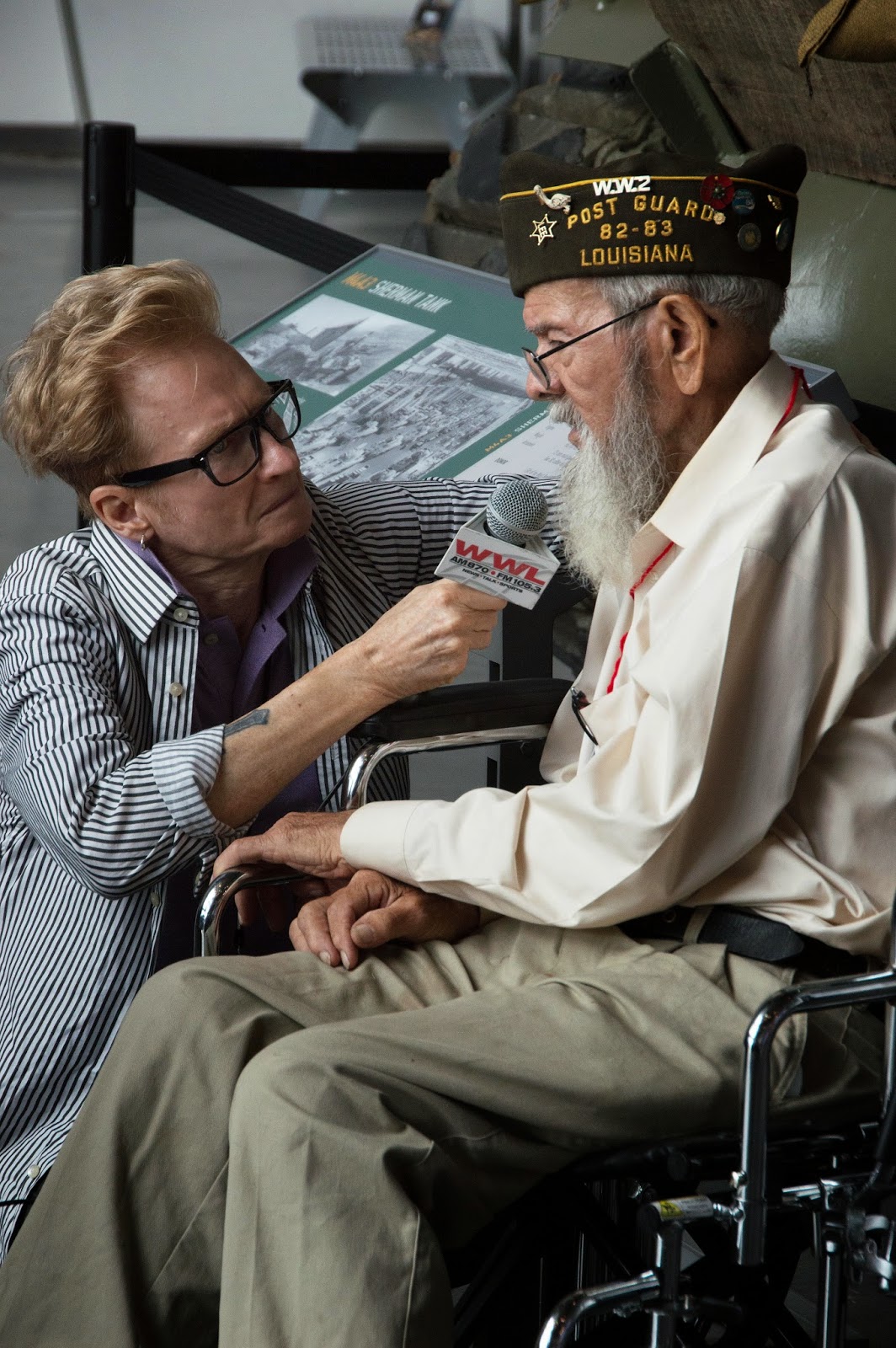 During my visit there was a WWII vet who was being interviewed.  I think you can see from the videographer's face that there was some emotion in the testimony.  I listened for awhile and was moved by what I heard but then felt that somehow even listening to this, let alone snapping photos, was an invasion of privacy.

Pretty much I just wanted to get out of there.  I am not sure why but I went into the gift shop to try to find something to buy and I got talking with the clerk when I bought my T-shirt.  In trying to explain how I felt I started crying.  The clerk said one of the reasons he liked working there was because he got to talk to people like me--all whom have some story of their own to tell about the museum.  He did not make me feel embarrassed at all and for that I am grateful. 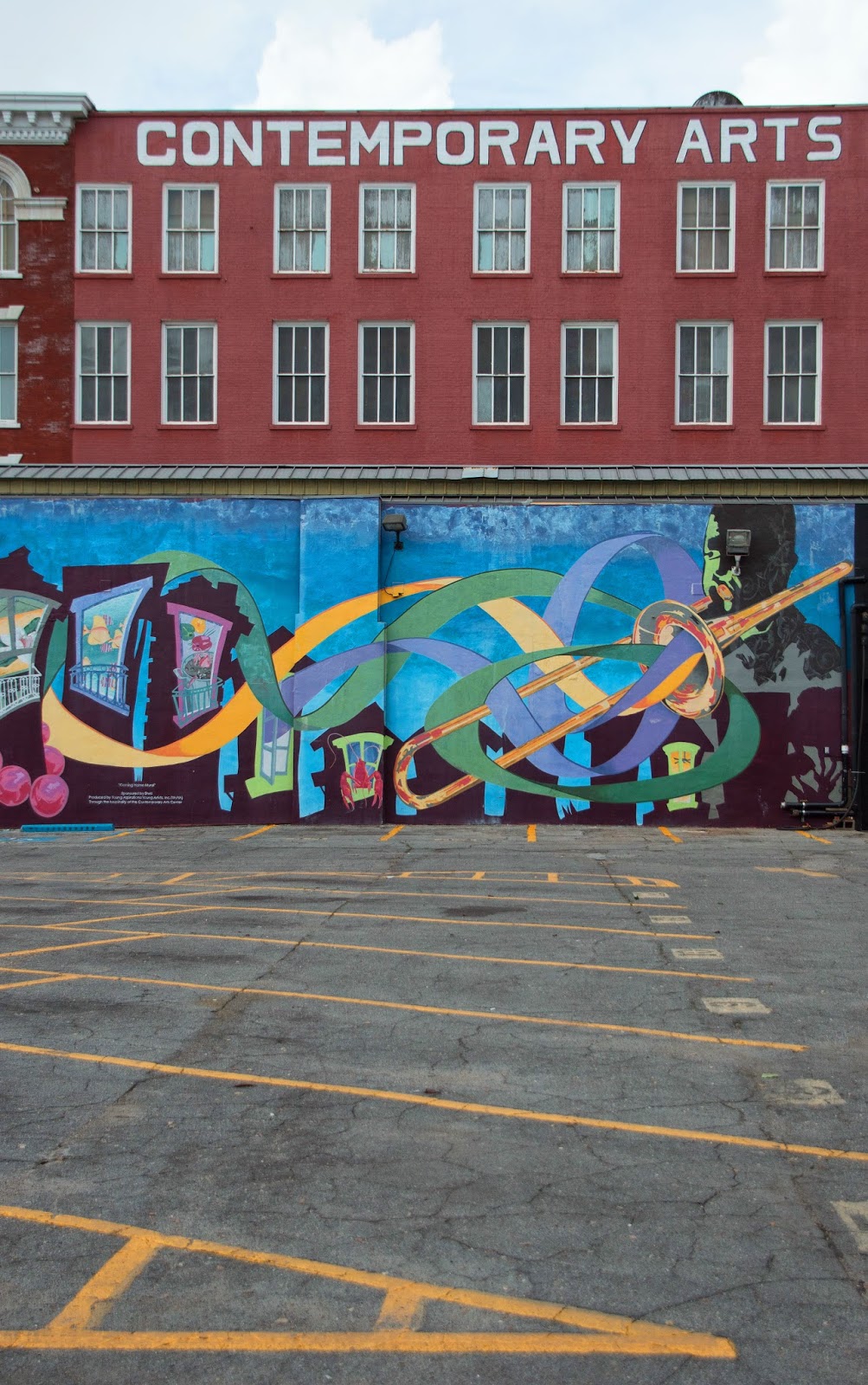 I decided to walk back from the WWII Museum to dispel some of the negative energy I was feeling.  I got pointed in the direction of Bourbon Street.  By sheer chance I came upon the Ogden Museum of Southern Art which is supported by the University of New Orleans.  This turned out to be a spectacular collection for me to look at and rivaled the NOMA for my interest in its holdings. 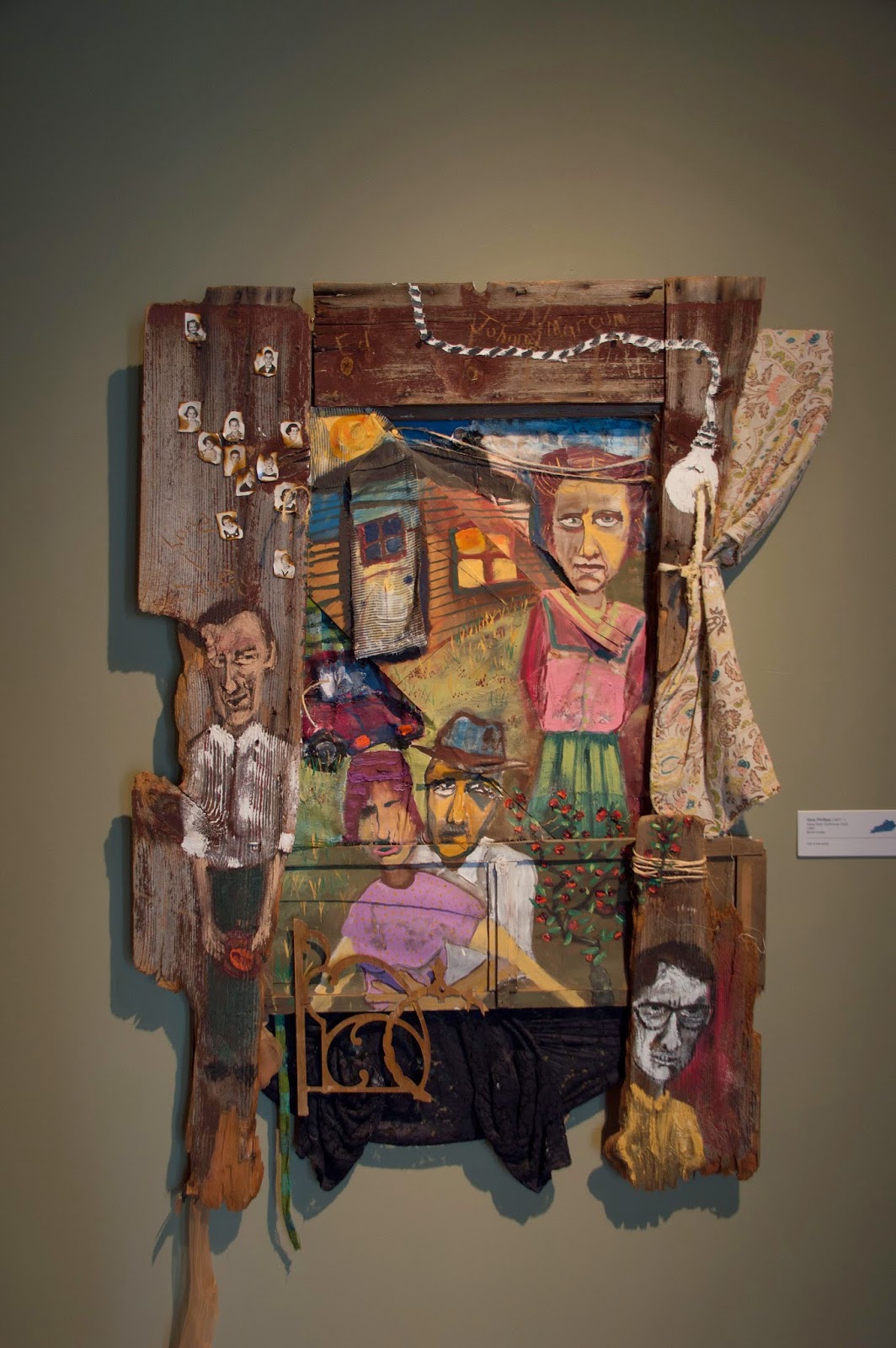 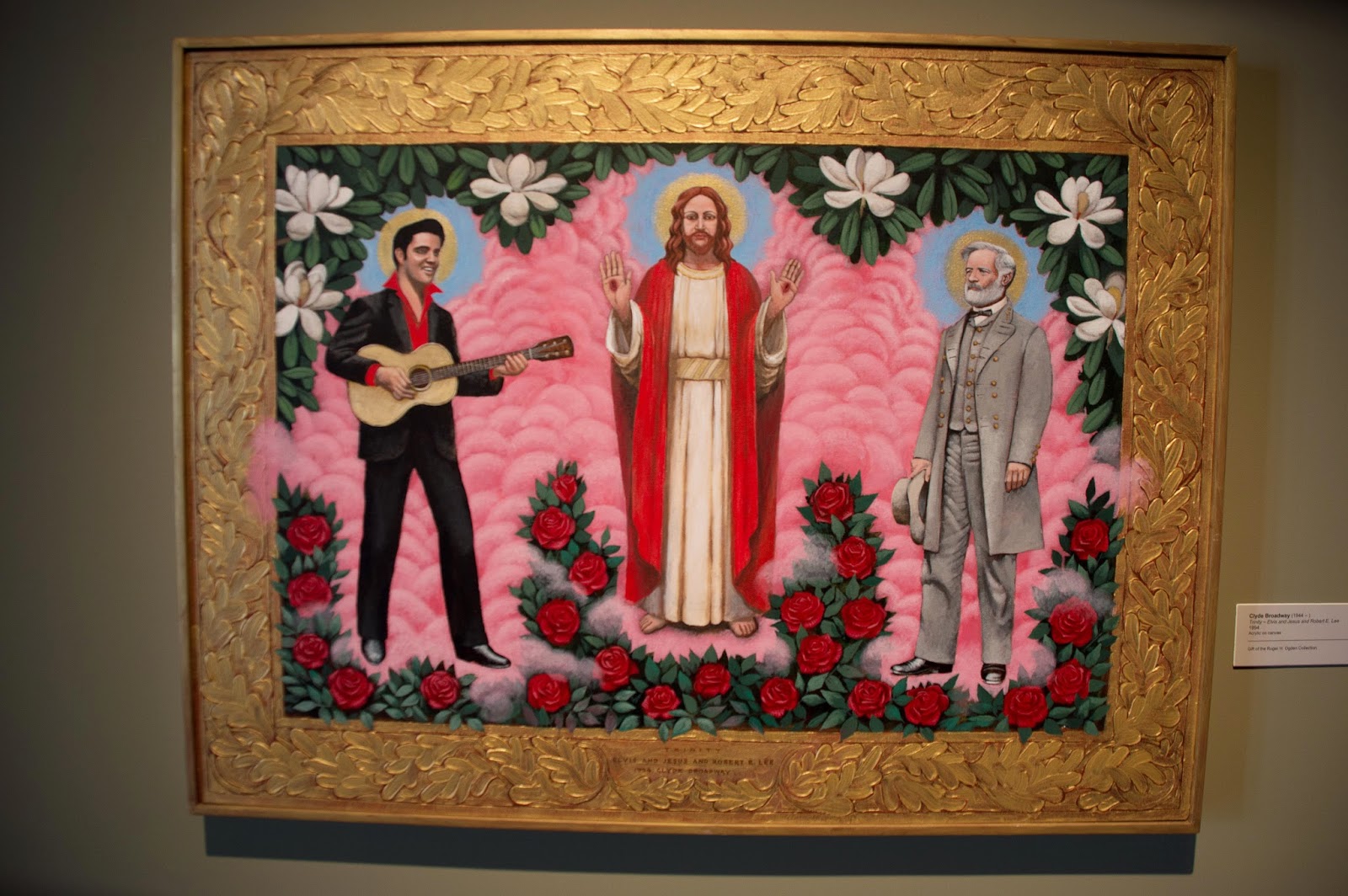 Trinity--Elvis and Jesus and Robert E. Lee by Clyde Broadway 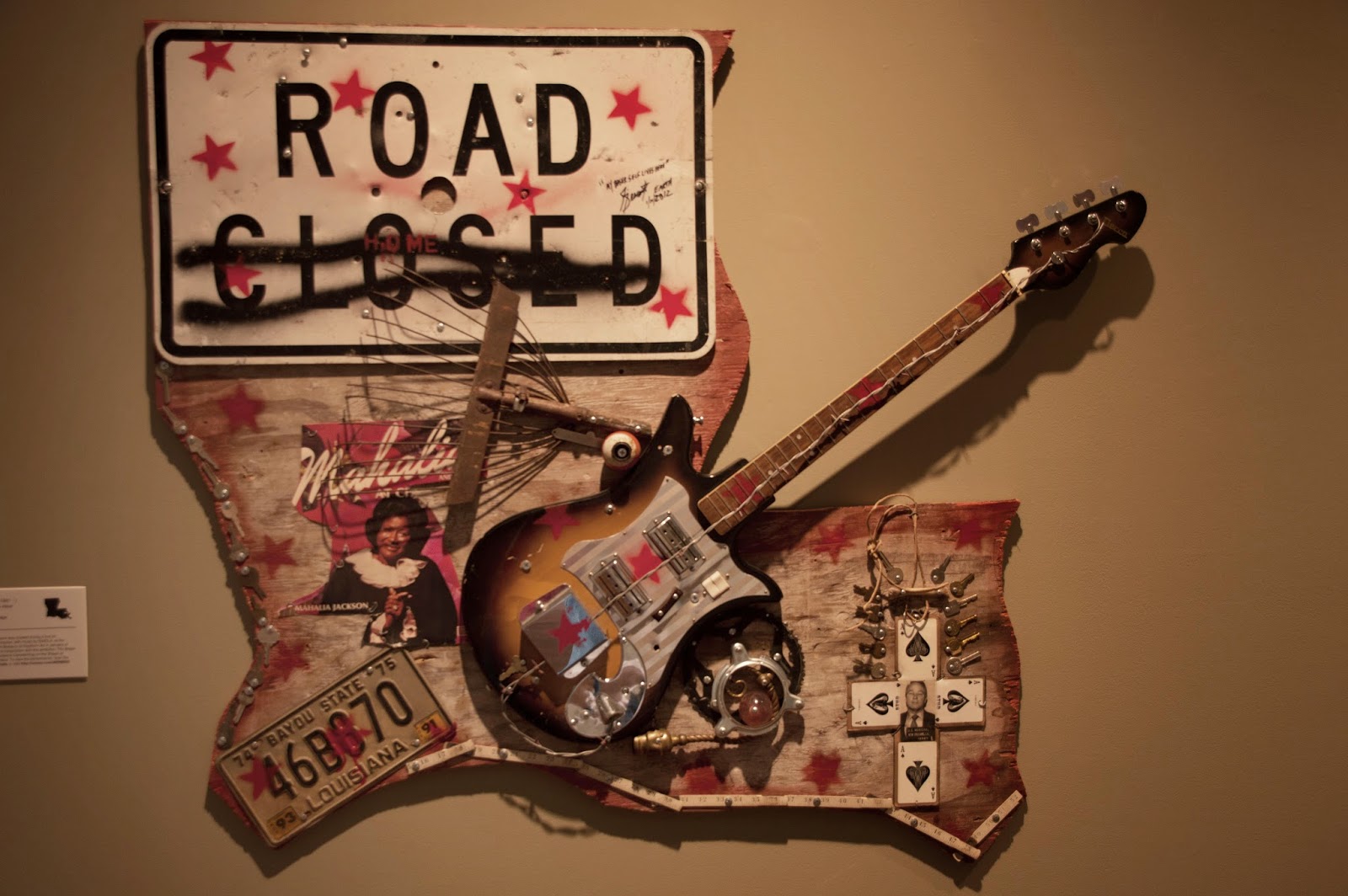 My Baser Self Lives Here by Jimmy Descant

My favorite piece in the museum was Shawne Major's Rocking Horse.  Check out this bad boy: 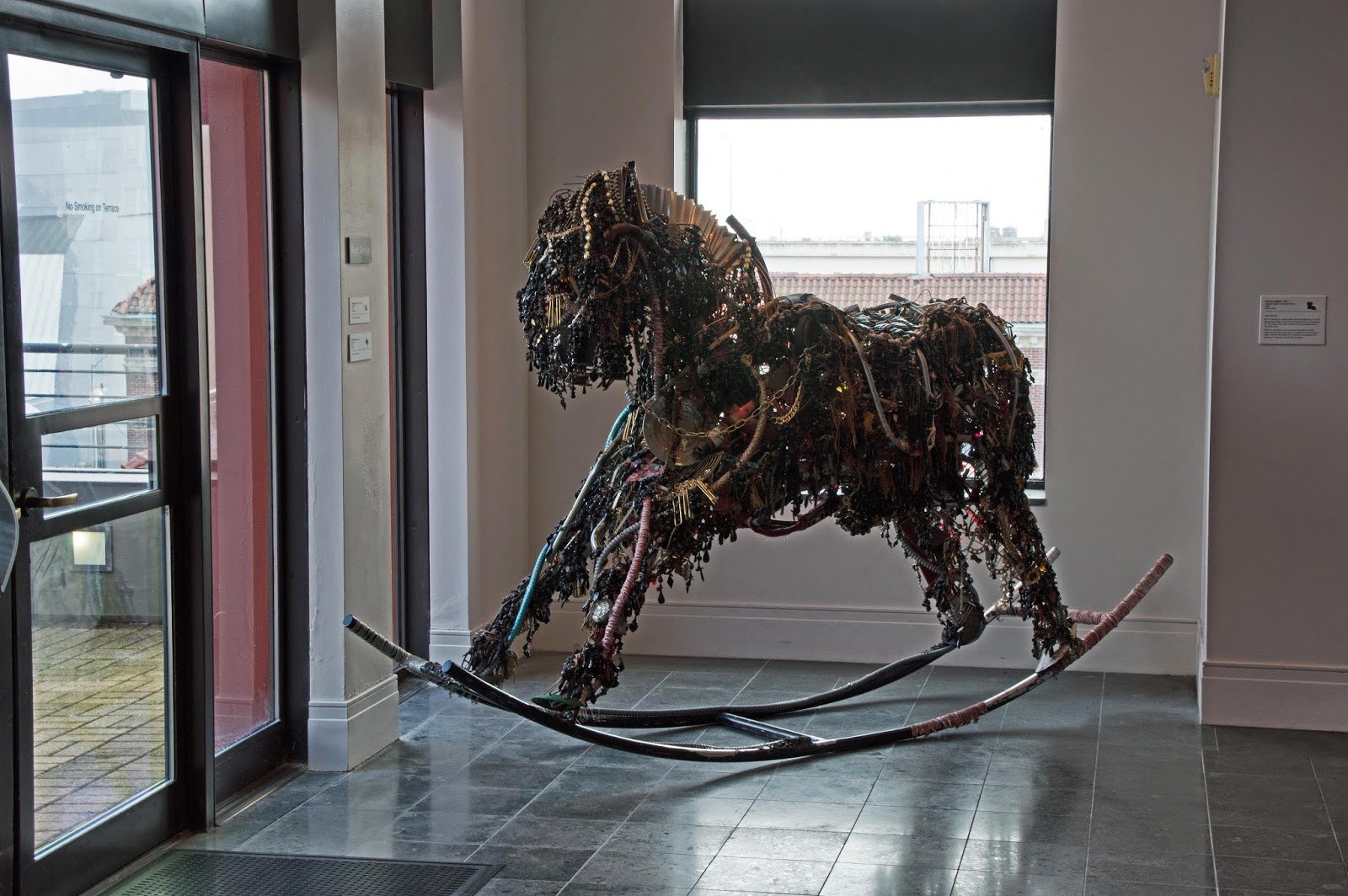 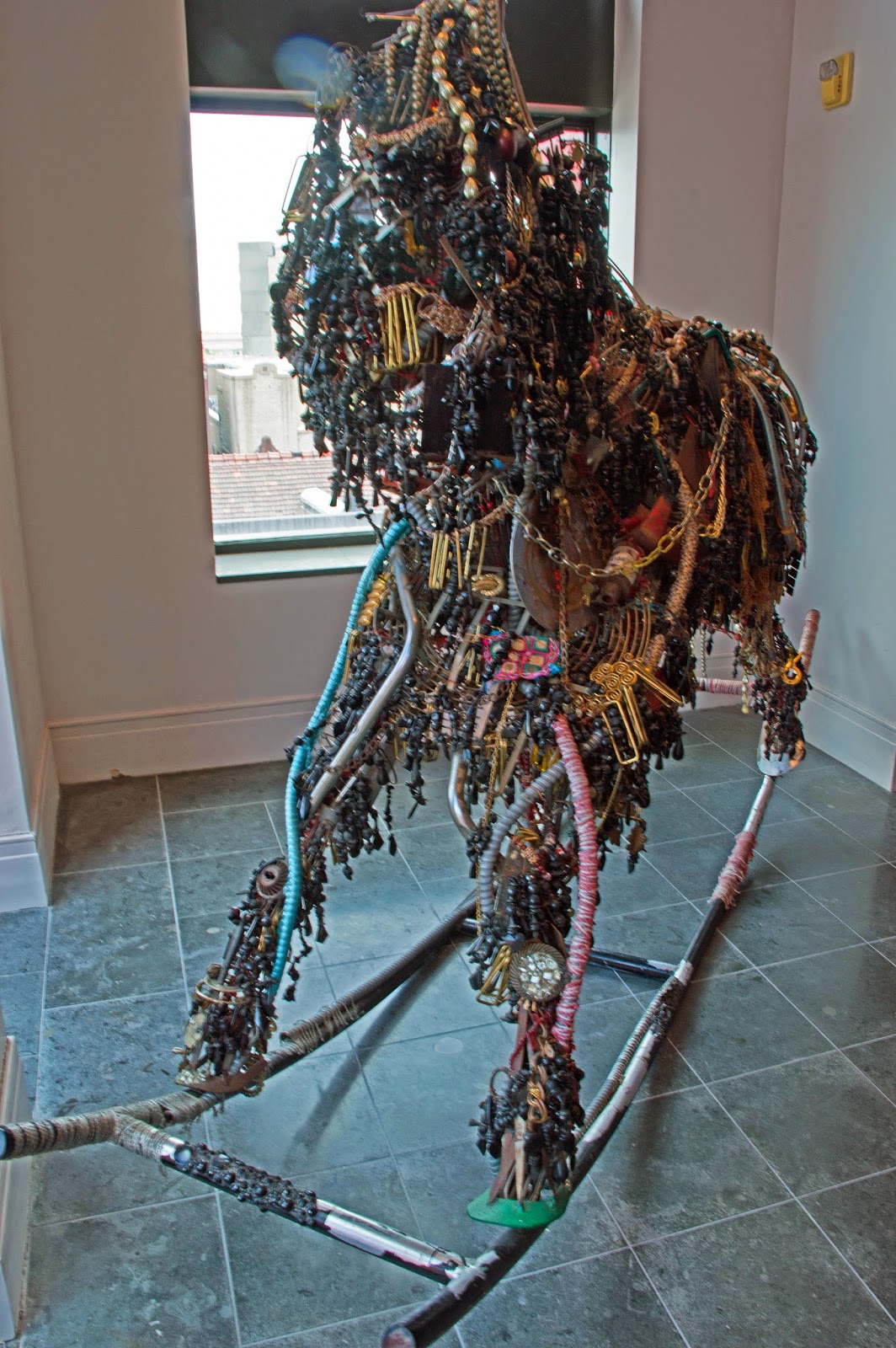 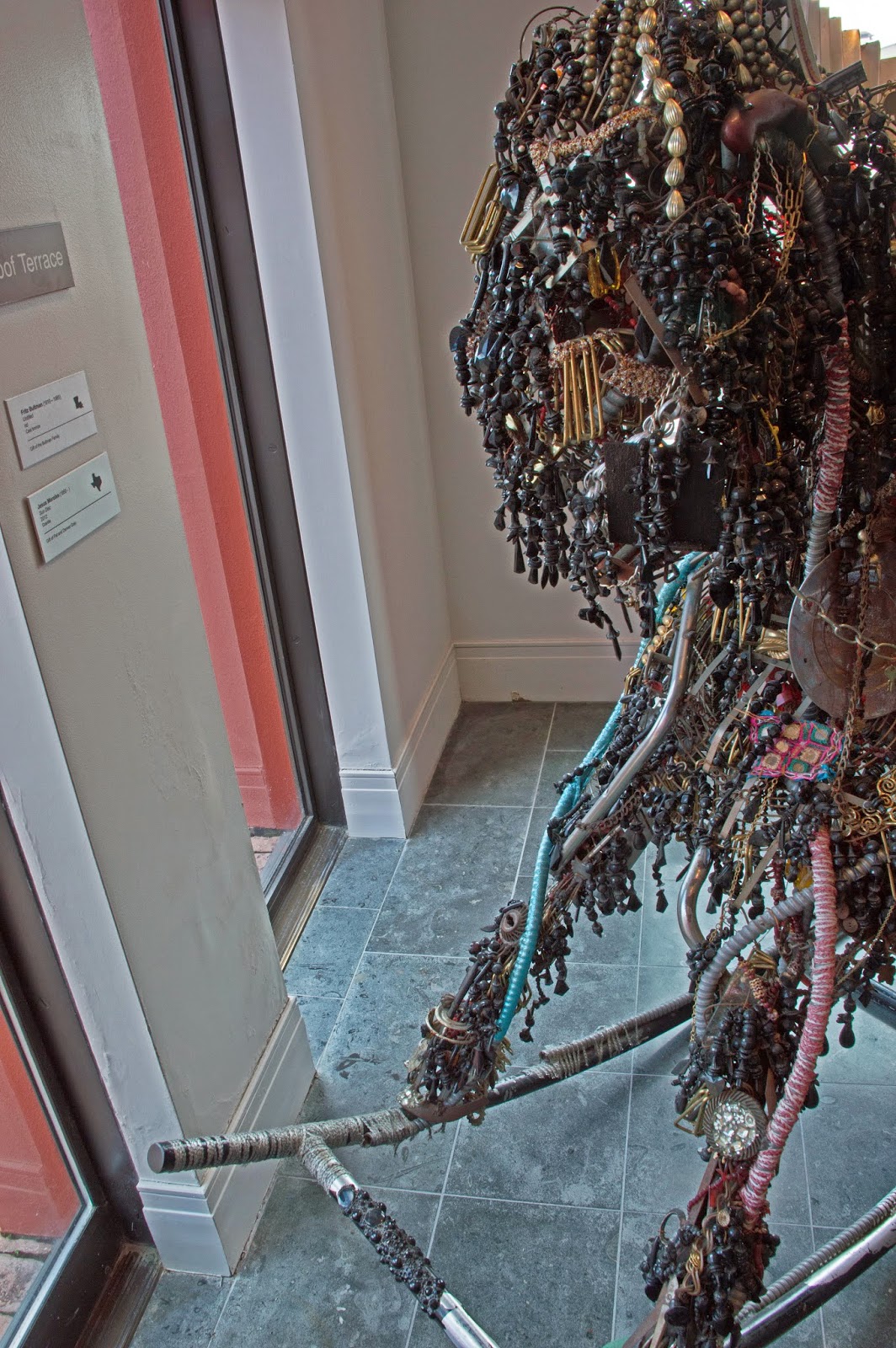 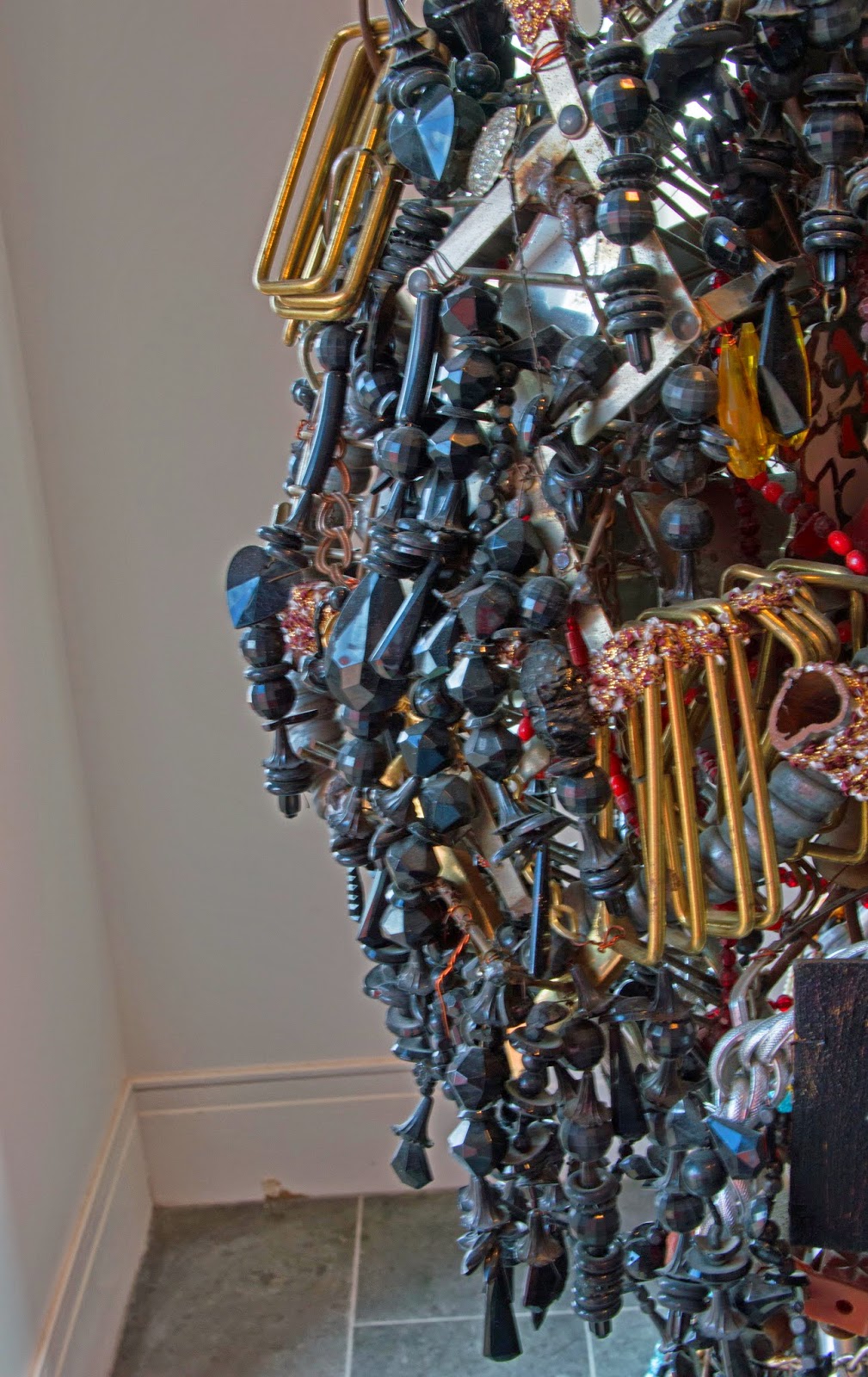 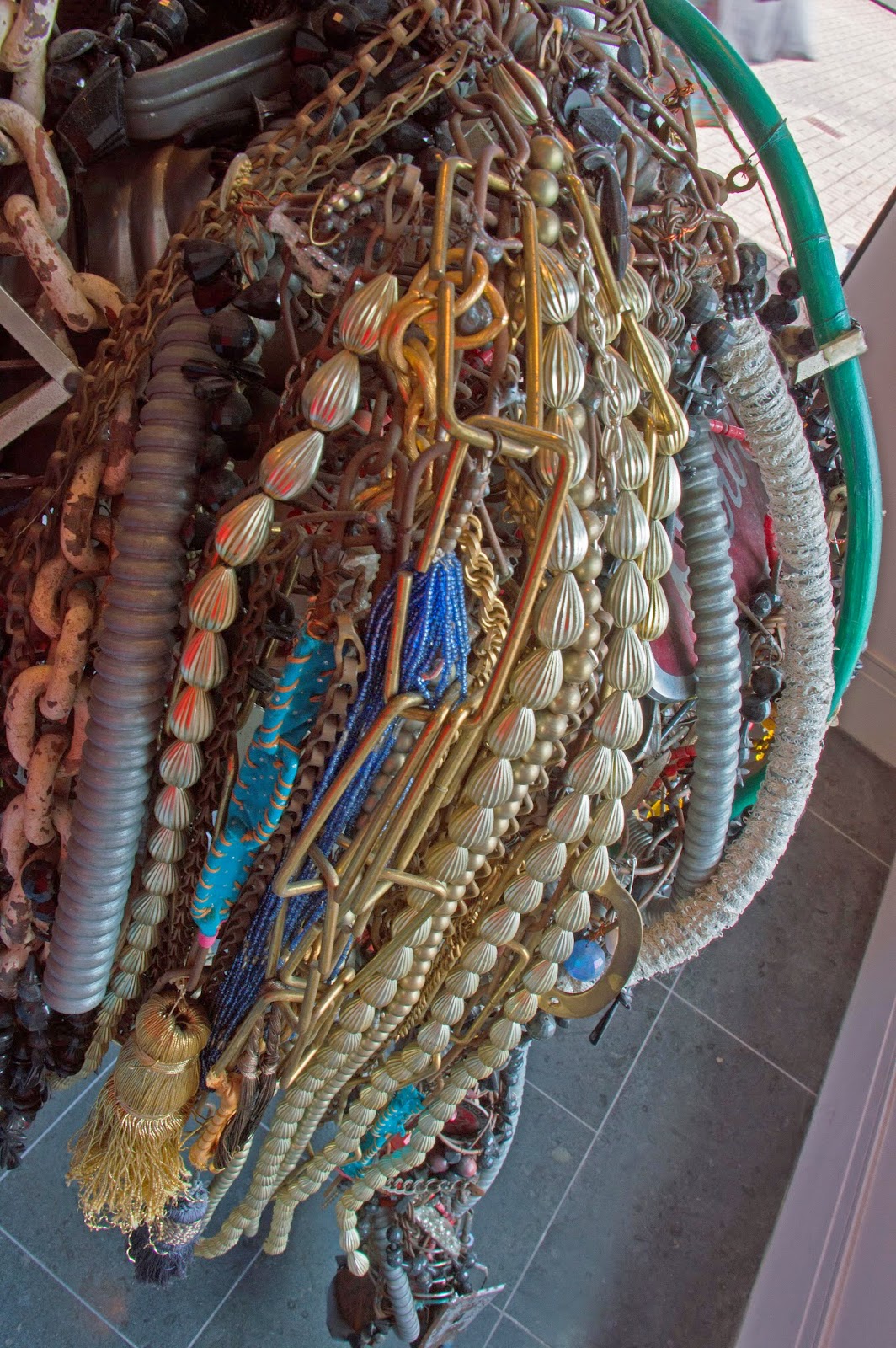 On my walk back I came across some cool wall art. 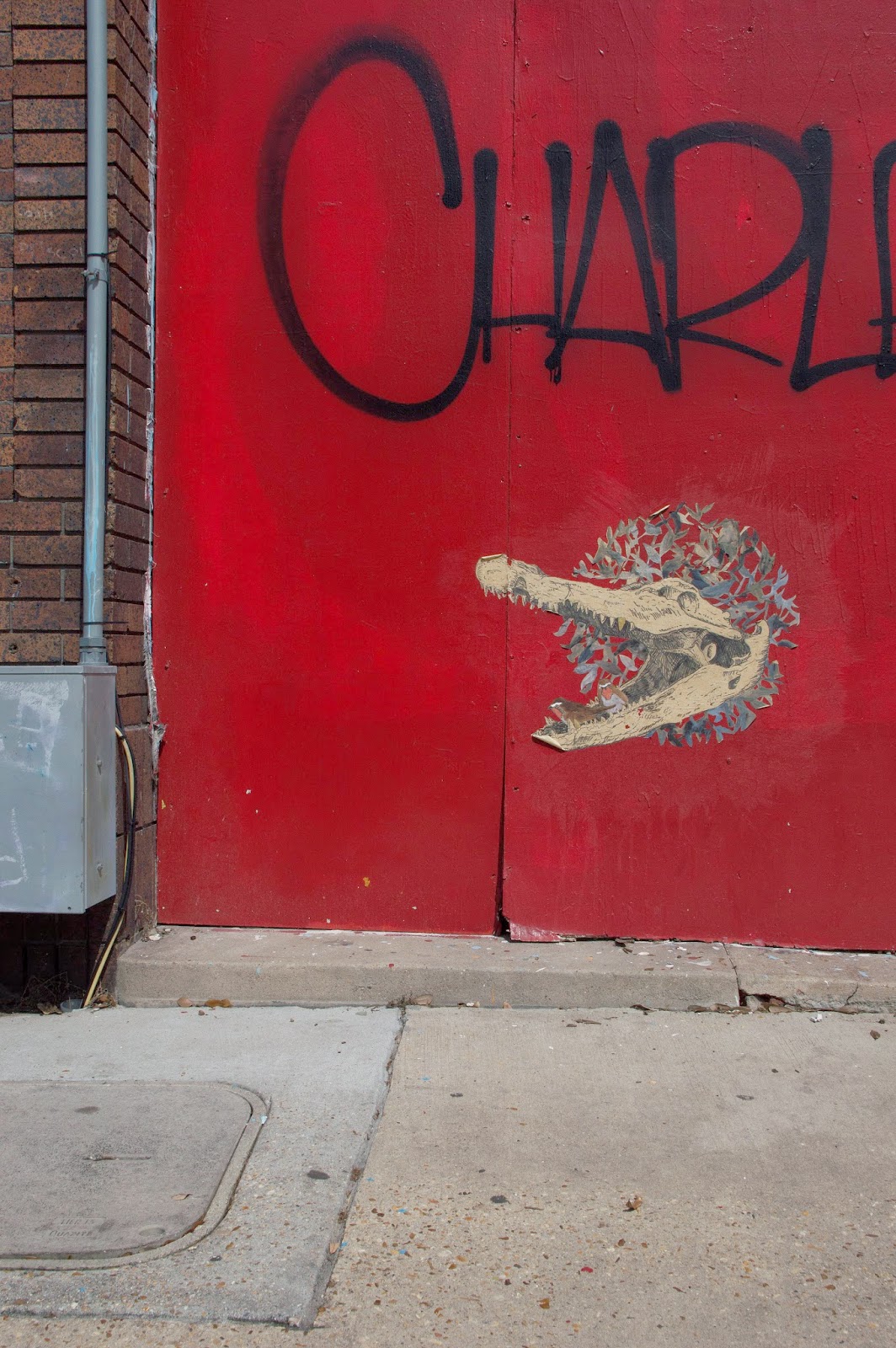 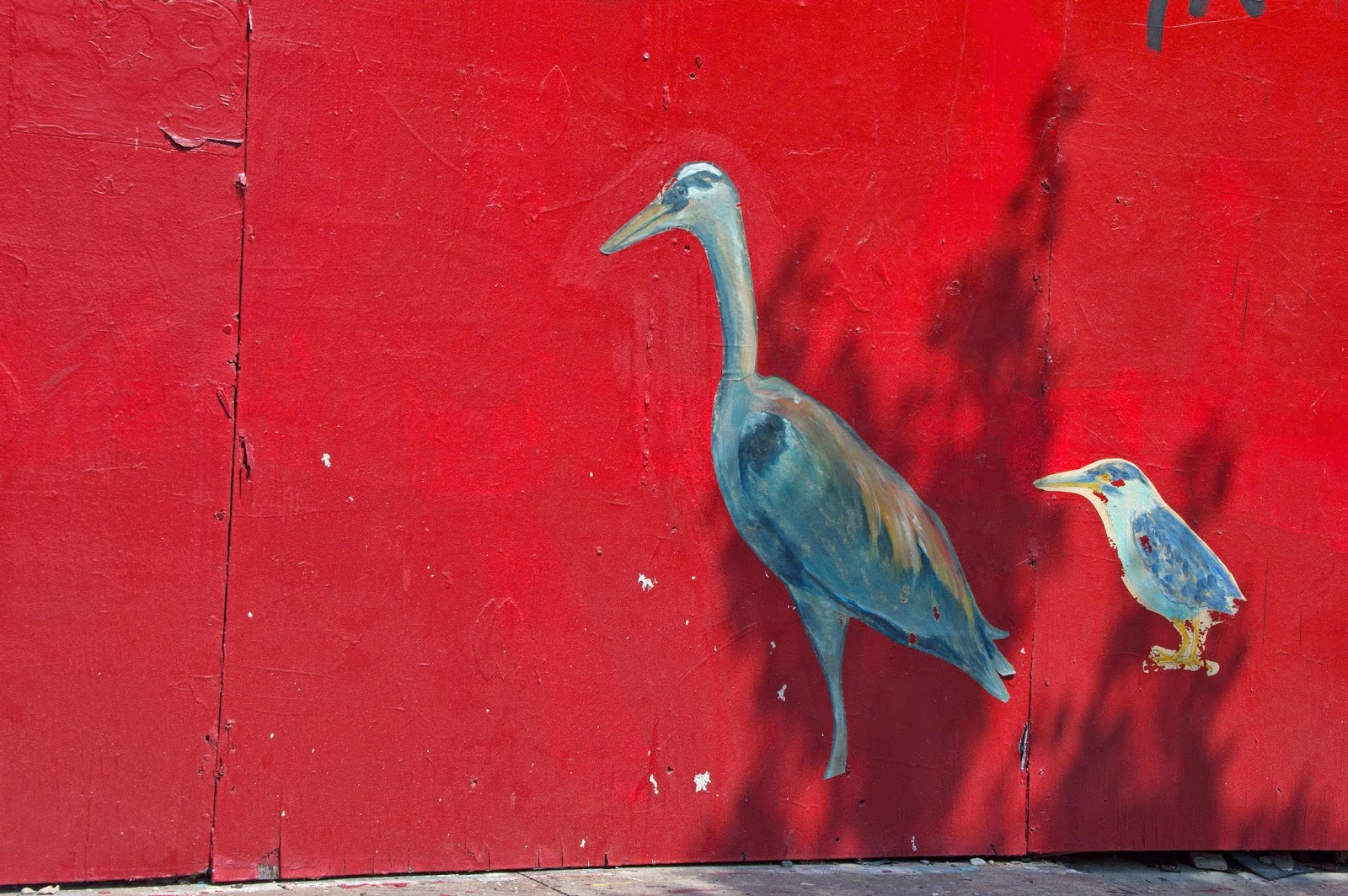 After that I decided I was going to faint if I did not buy some shorts.  My only excuse for not packing any is that I was coming to NOLA from Milwaukee where shorts are still not on our minds, or legs.  I first stopped at a high end men's store where after being offered shorts at either a $74 or $114 dollar price, I decided to get some advice.  I asked one of the tour guide hawkers if she had a suggestion and she sent me down to Decatur Street where I bought a pair for $34 thus proving that all men's shorts in New Orleans have a price that ends in a 4.

Our first formal activity for the Vampire Hunting workshop was to meet in the lobby of the Four Points Sheraton on Bourbon at 6:30 p.m.   After a brief meet and great, we walked to dinner at the Orleans Grapevine Wine Bar and Bistro. 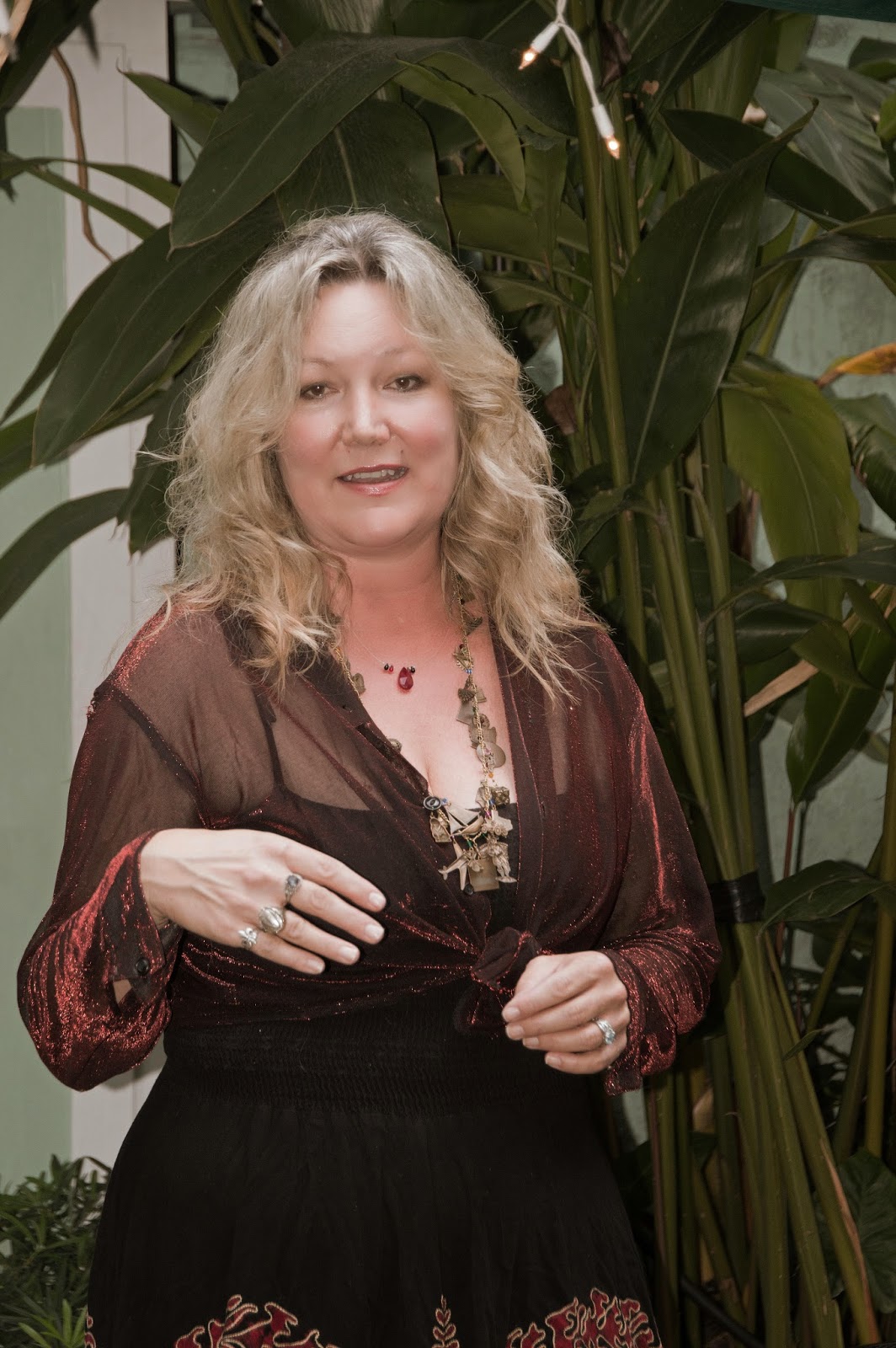 If you are hunting vampires I think the easiest way to capture one is to invite her to do a tarot reading.   Part of our experience on this night would be a reading by "vampire" Marita Jaeger, owner of Boutique du Vampyre.  I am not a big believer in readings but this is the third one I have had and each time I feel the reading is on the mark.  This time was no exception and I am pleased to say it was all positive. 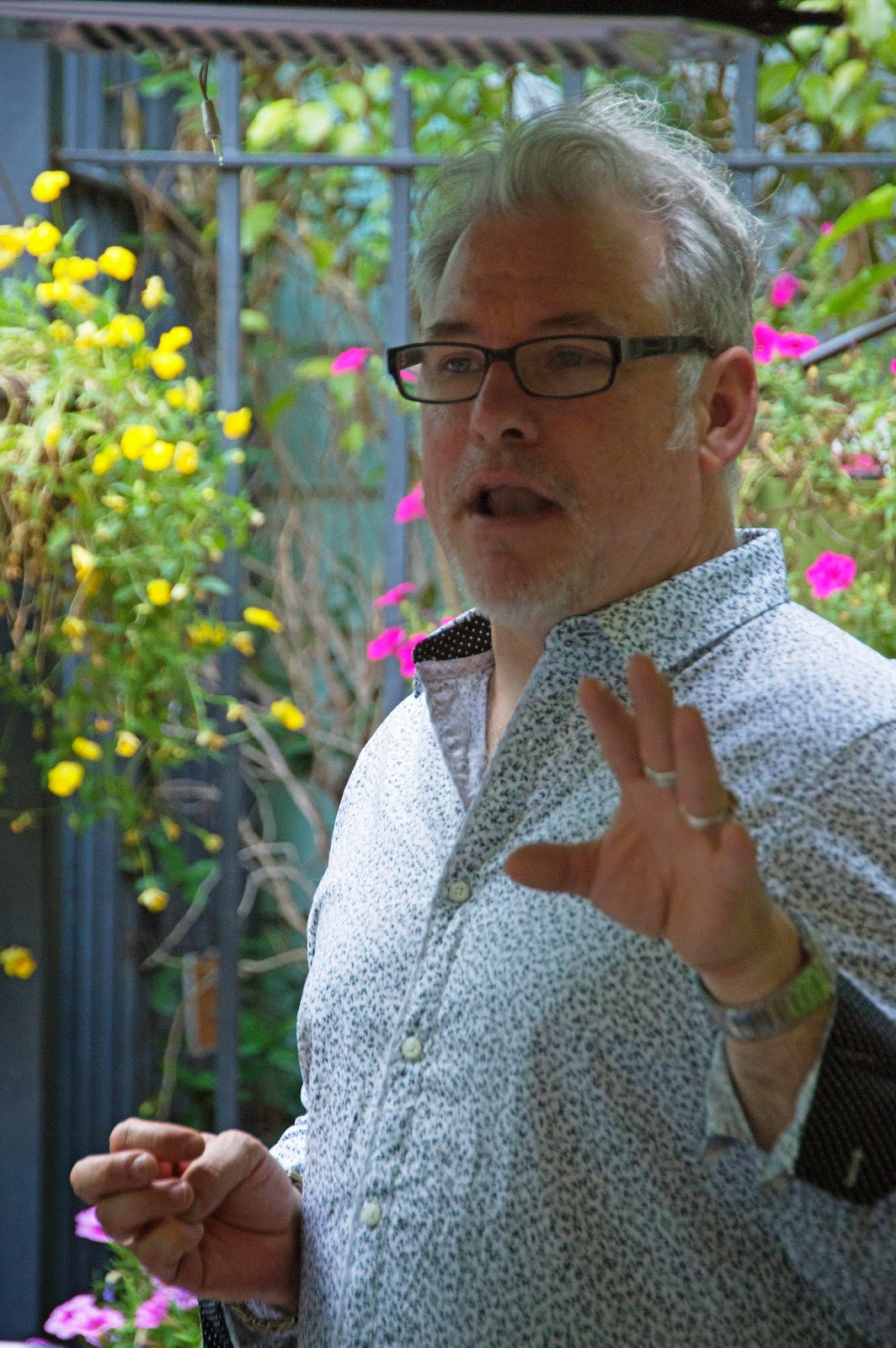 Michael deMeng, not a Vampire (or at least, I don't think he is a Vampire) Others had vampire teeth made.  Poor KD, either this guy has fallen asleep or he is checking out her beads. And she looks so happy about it.

After dinner I wandered over to Muriel's Jackson Square Restaurant with KD, Katherine, Bill, Michael and Andrea for a sazerac which is some NOLA drink that involves a minor amount of liquid and a huge punch of alcohol.  Muriel's is a haunted restaurant with a table set for the ghost and a whole story that goes along with it.  We visited there on my other trips including on the ghost tour.

I am pleased to report I was home by 11:30 p.m. and went right to bed this night.  No vampires or ghosts visited.  That I am aware of.

Posted by gary warren niebuhr at 8:56 AM