Today starts another adventure in the world of assemblage art taught by Michael deMeng through Valley Ridge Art Studio and Katherine Engen.  This year we are returning to New Orleans for a Vampire Hunting Kit workshop.  This is the fourth time the group has been here and the third workshop that I have been able to attend.

Michael and Katherine defined the workshop this way:  "So in this workshop you will be using your artistic skills to modify an everyday box or case into something that will send shivers down the spines of those nocturnal lurkers."  What this means for traveling is that you not only will need to worry about the weight of your suitcase because of your clothes but also because of your art supplies.  While I have a well-deserved reputation for bringing my entire house to drive-able workshops, I decided to go minimalistic for this one and stuffed all my assemblage crap into my checked luggage bag.  Even after doing that, my suitcase only weighed in at 40 lbs.

Being the only person on the planet who did not know Southwest flies direct to NOLA, I booked an early morning flight out of Milwaukee on United with a transfer in Chicago.  The good news is it was only $336 round trip and I would get to NOLA early.  The bad news was that Denice came to the airport to eat breakfast with me only to have us discover that the one decent restaurant at the airport has been remodeled and no longer is open to serve breakfast (at least on Sundays!).

Not my photo (I just wished I had taken it)

On the plane, my seatmate was opera singer Julia Benzinger from Connecticut who had just sung Beethoven's Ninth in Sheboygan the night before, had a big thick book along to read and was wearing a piece of steel wire jewelry.  Yeah, we had a few things in common.  Because the flight to Chicago takes approximately as long as it takes to get air born and land again, we talked almost the whole flight.

Arriving in NOLA proved easy and a short hotel shuttle ride later found me at the Four Points by Sheraton on Bourbon Street in New Orleans.  We might as well get this out of the way right away:  the Four Points is a nice hotel and my room is actually on the Bourbon Street side of the complex.  I do not hear the noise at night but it does go on all night long out there and I think the Street may have gotten even more sleazy since the last time I was here two years ago.

In a home with cockroaches, you are warned not to get up in the middle of the night and turn on a light.  The same can be true of Bourbon Street--you do not want to go outside the hotel until after the city and all the bar owners have washed and disinfected the streets in the morning.  I am not kidding--disinfected.  That said, NOLA is a fascinating city that is a lot more than B Street as you will see if you stick with this blog.

Once unpacked, my first order of business was to call Katherine Engen to see if I could hook up with anything going on today.  Katherine and her bestie Bill Weber were heading over to The Grill (formerly the Camellia Grill) for lunch because every other restaurant in NOLA was filled with families doing the Mother's Day thing.  Camellia is a throwback '50s lunch counter where all (but one) of the waitstaff are African-Americans.  Everyone wears white coats and black bow ties so it feels at times like eating in the dining car of a railroad in the '50s to me. Check out the photos in upcoming blogs to see what it looks like. Anyway, the food is great and today I had Gumbo and a BLT.  Bill picked up the tab.

Bill and Katherine were nice enough to let me share a cab to the New Orleans Museum of Art (NOMA) where the main exhibition was a lifetime of stuff by an artist named Mel Chin.  Chin appears to be one of those artist who has not had a thought that he could not turn into a cool idea made in a completely different medium from the previous work he had done.

I especially liked the collage of called Funk and Wags wherein he cut images from the old text and made very amazing works of art.  My favorite was a tree next to a human head where the root has grown in the skull and cracked it like an old sidewalk.  (Please note:  no photographs were allowed in this portion of NOMA).

Chin credits Marcell Duchamp and Joseph Cornell as influences which is cool because I was able to see 15 pieces by Cornell displayed in their own room. 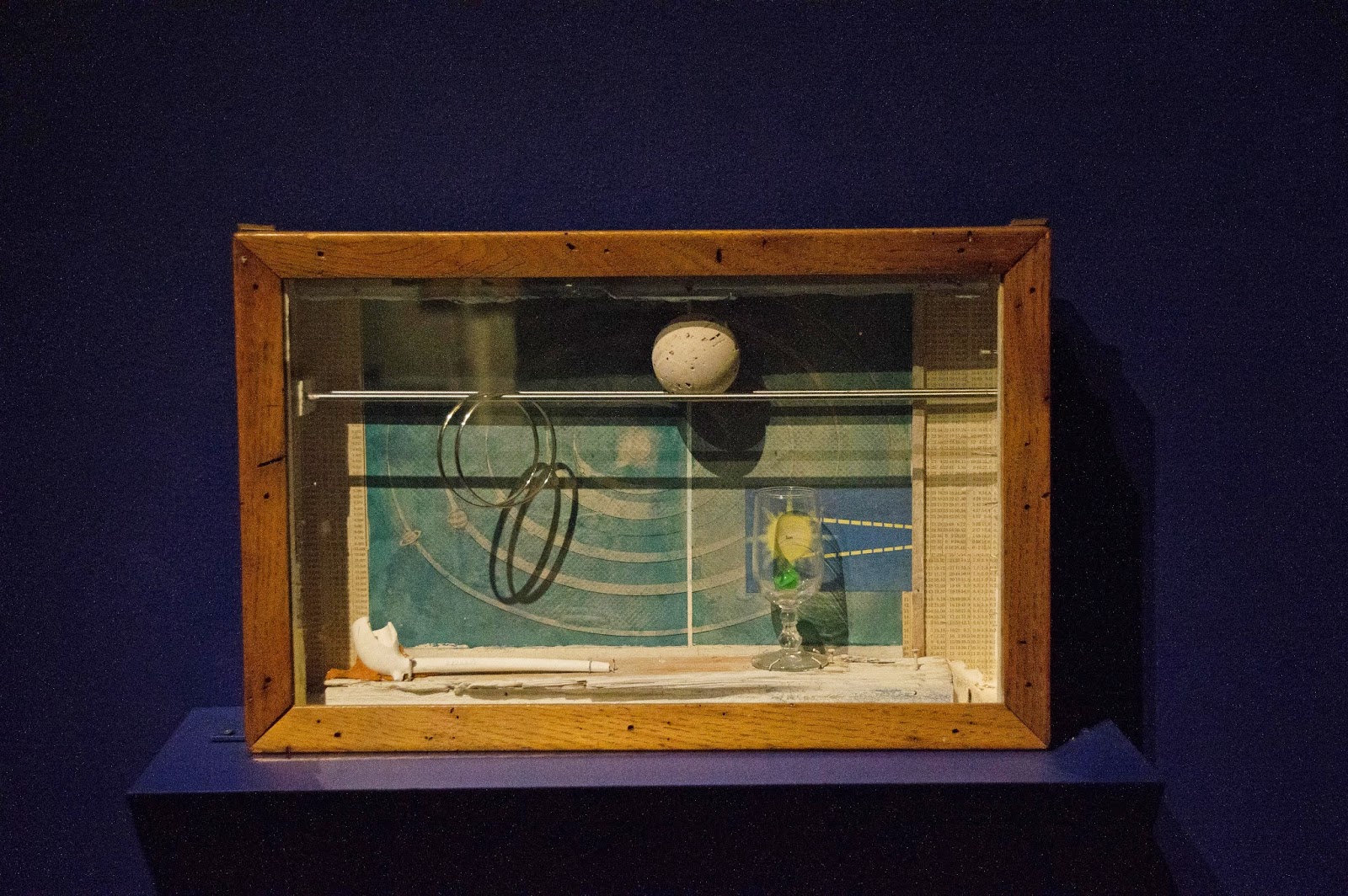 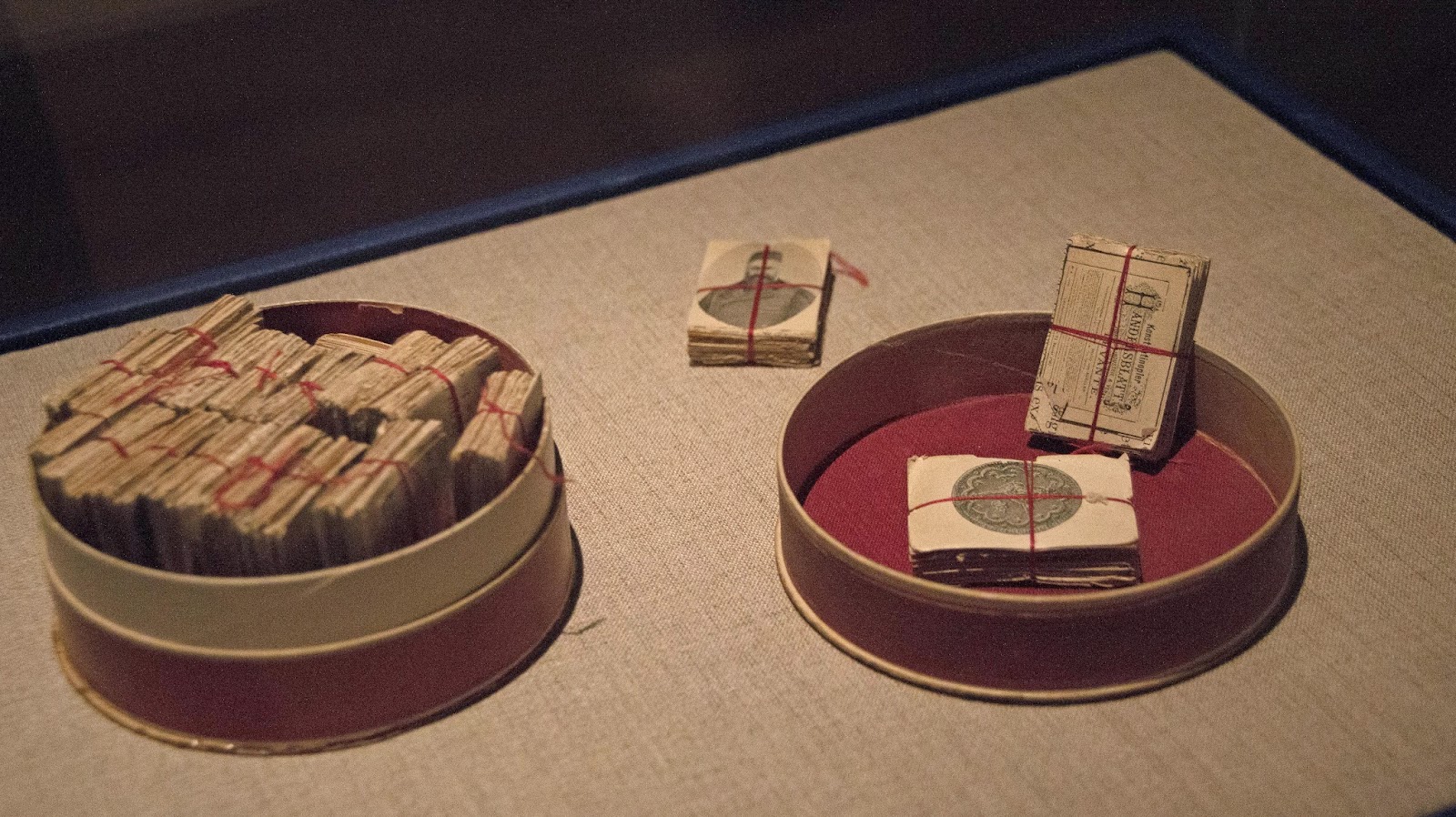 While Cornell may not be the best by today's standards it is important to remember that he was a pioneer in the field of found object assemblage and opened a door artists are still walking through.

Another influential artist was Robert Rauschenberg and the museum also had a exhibition recreating one that had happened awhile ago called Five on Five in which Rauschenberg had a few pieces and may have been the curator although my memory is fuzzy on this part.

Outside of that exhibition there was a huge quilt like structure which incorporate toy soldiers and a variety of other found objects.  This might have been my favorite piece to see: Shawne Major's War Channel (2008).  It appealed to me thematically but also as a pure assemblage piece. 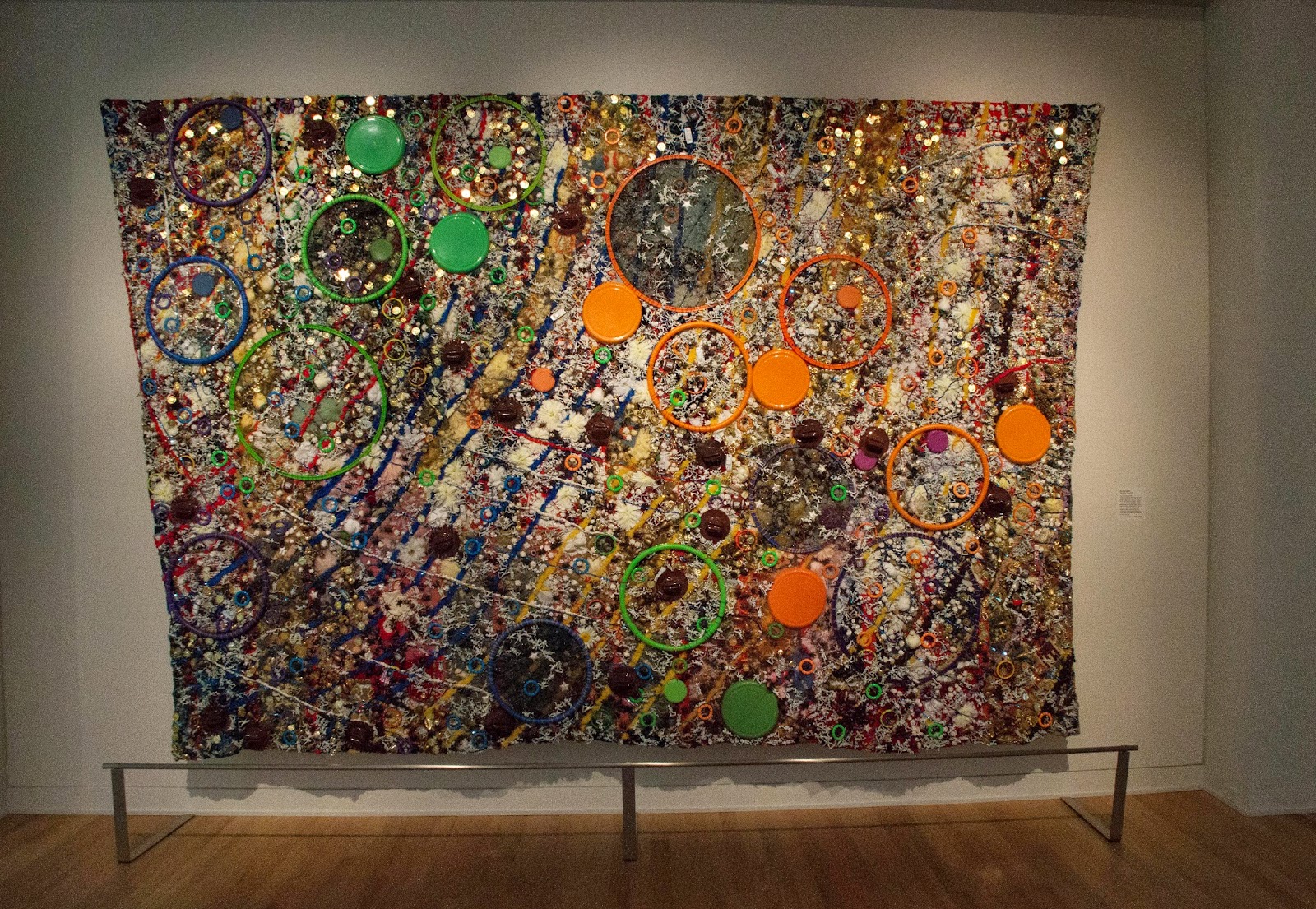 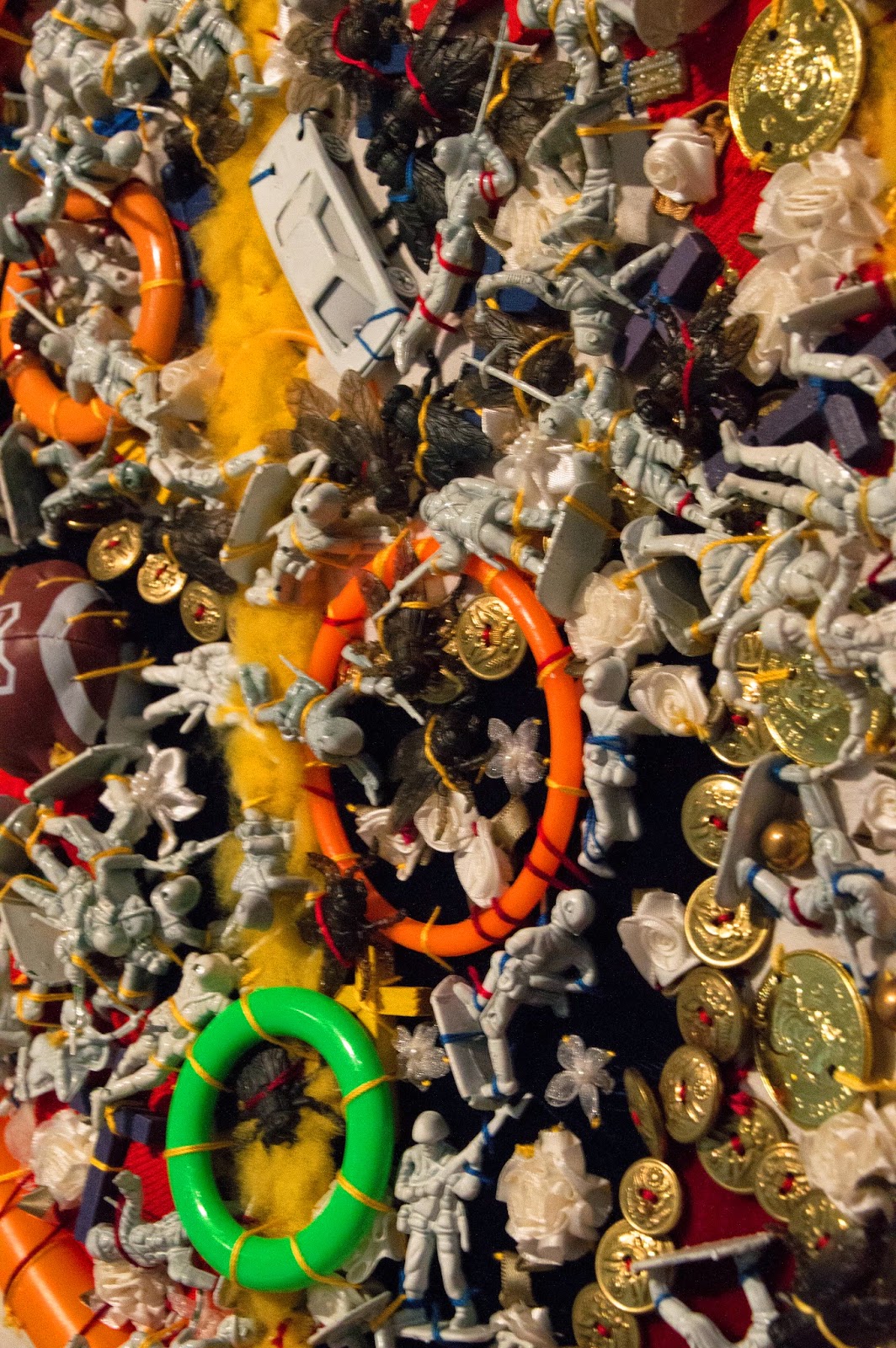 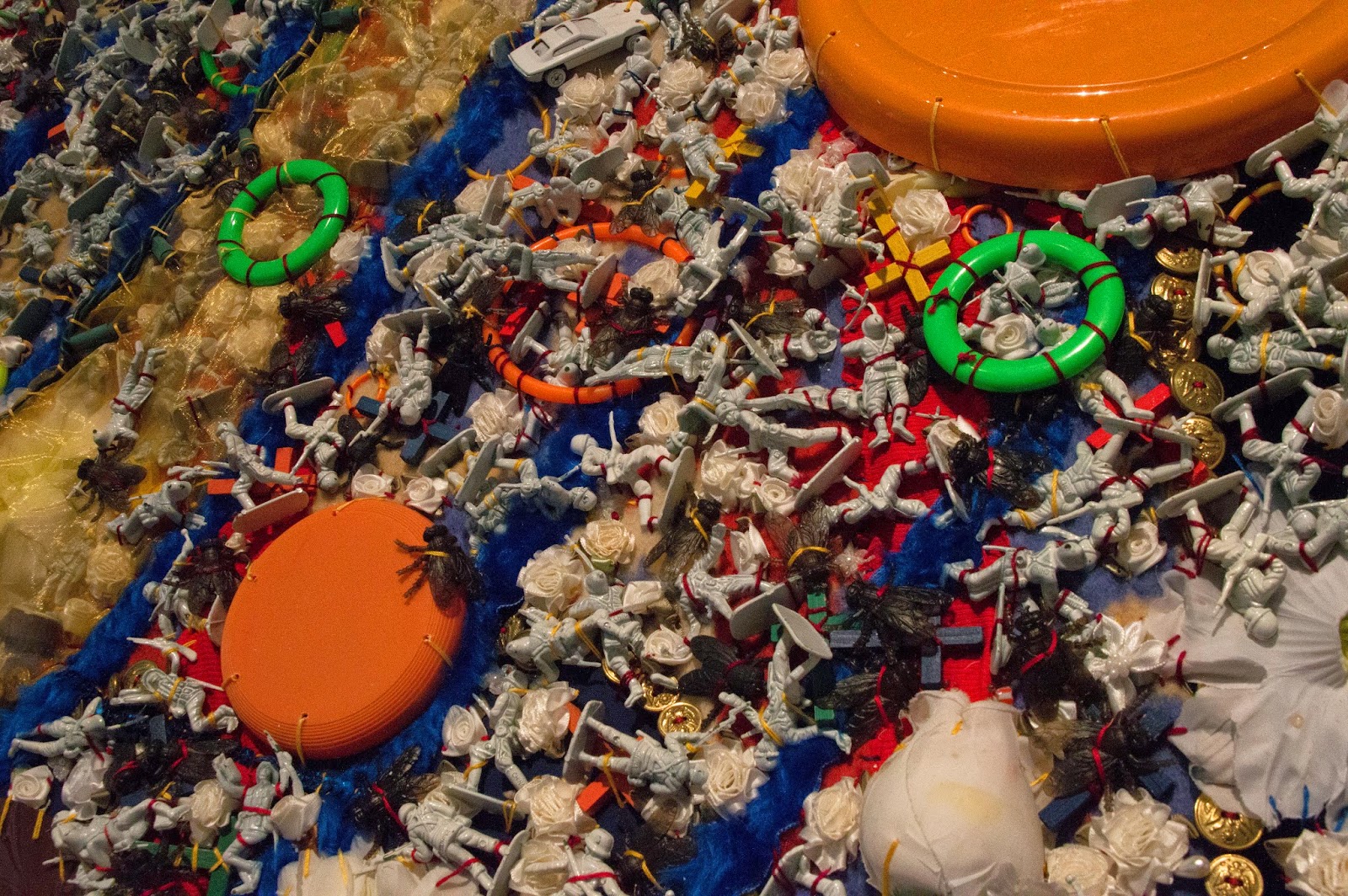 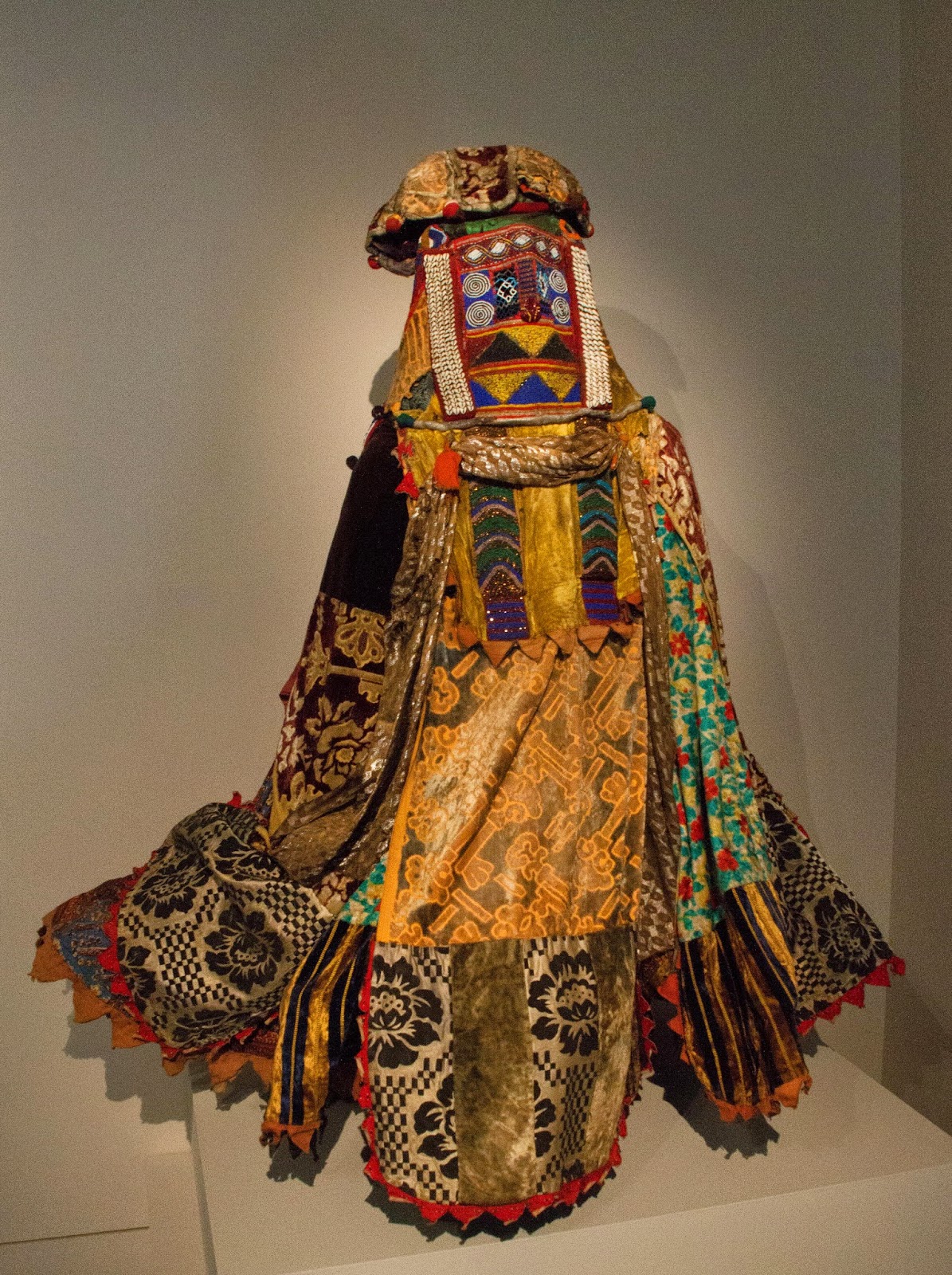 We raced to the third floor which has a world mask collection but time ran out and we were kicked out at 5.  Our next objective on Katherine's list led us to riding the trolley line back downtown. 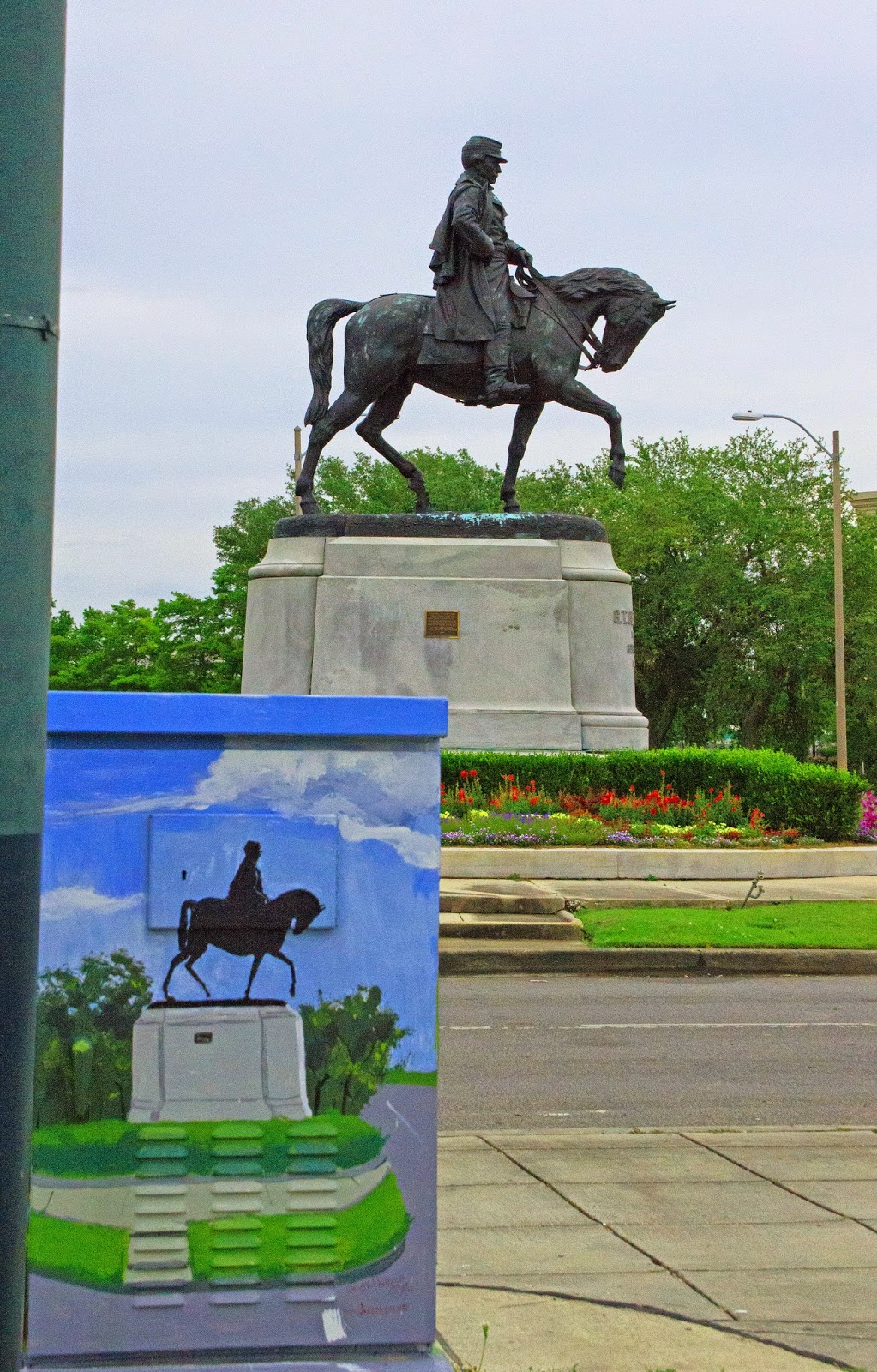 When we got off the trolley at Canal Street the nicest, sweetest sounding busker sang a song for Bill and Katherine that I thought was pretty darn cool.  He did not even sing to me and I tipped him anyway.

Then hopping a cab, we arrived at the Rock 'n' Bowl wherein a combination of food, alcohol, bowling and music is offered every night. 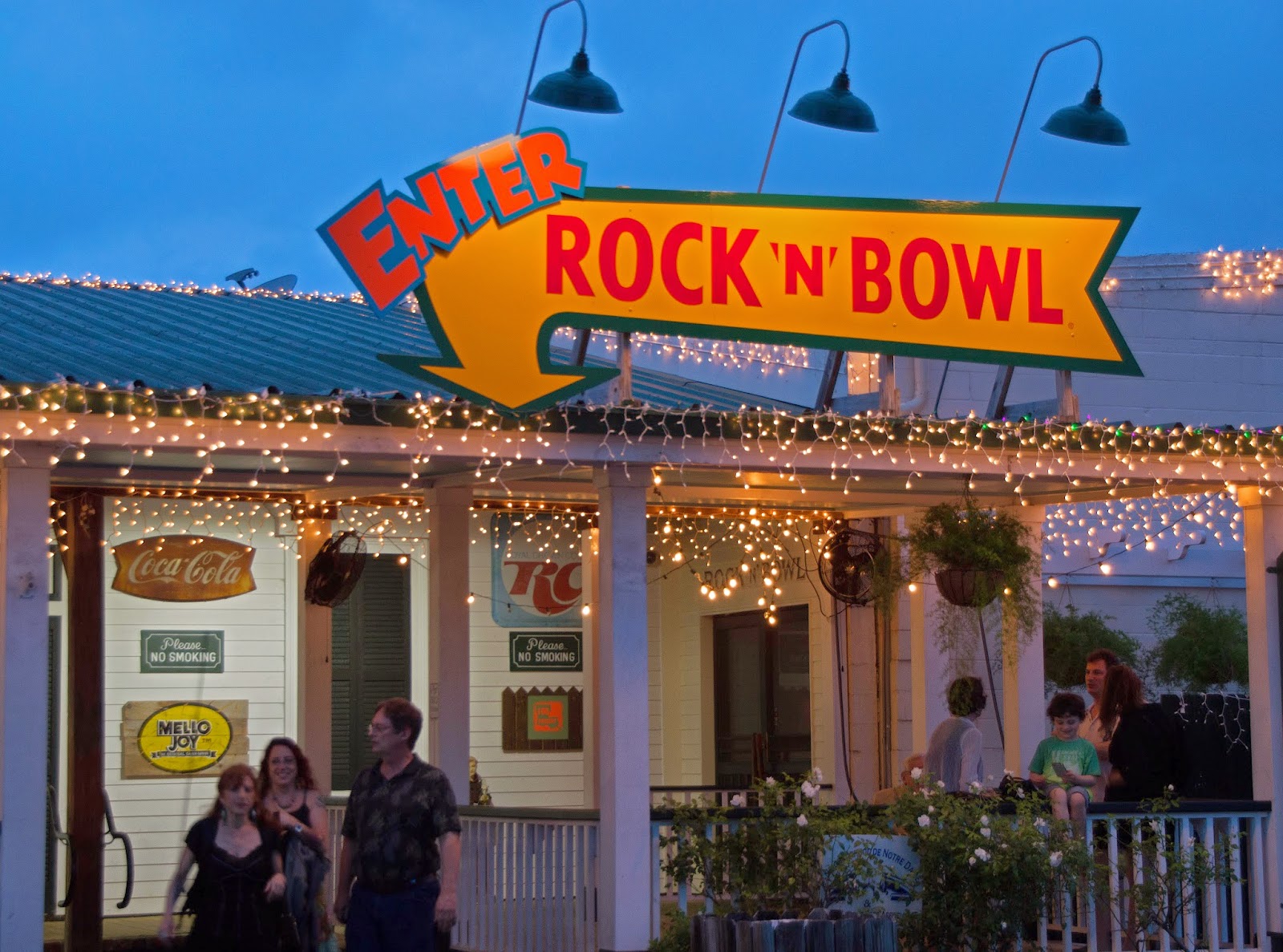 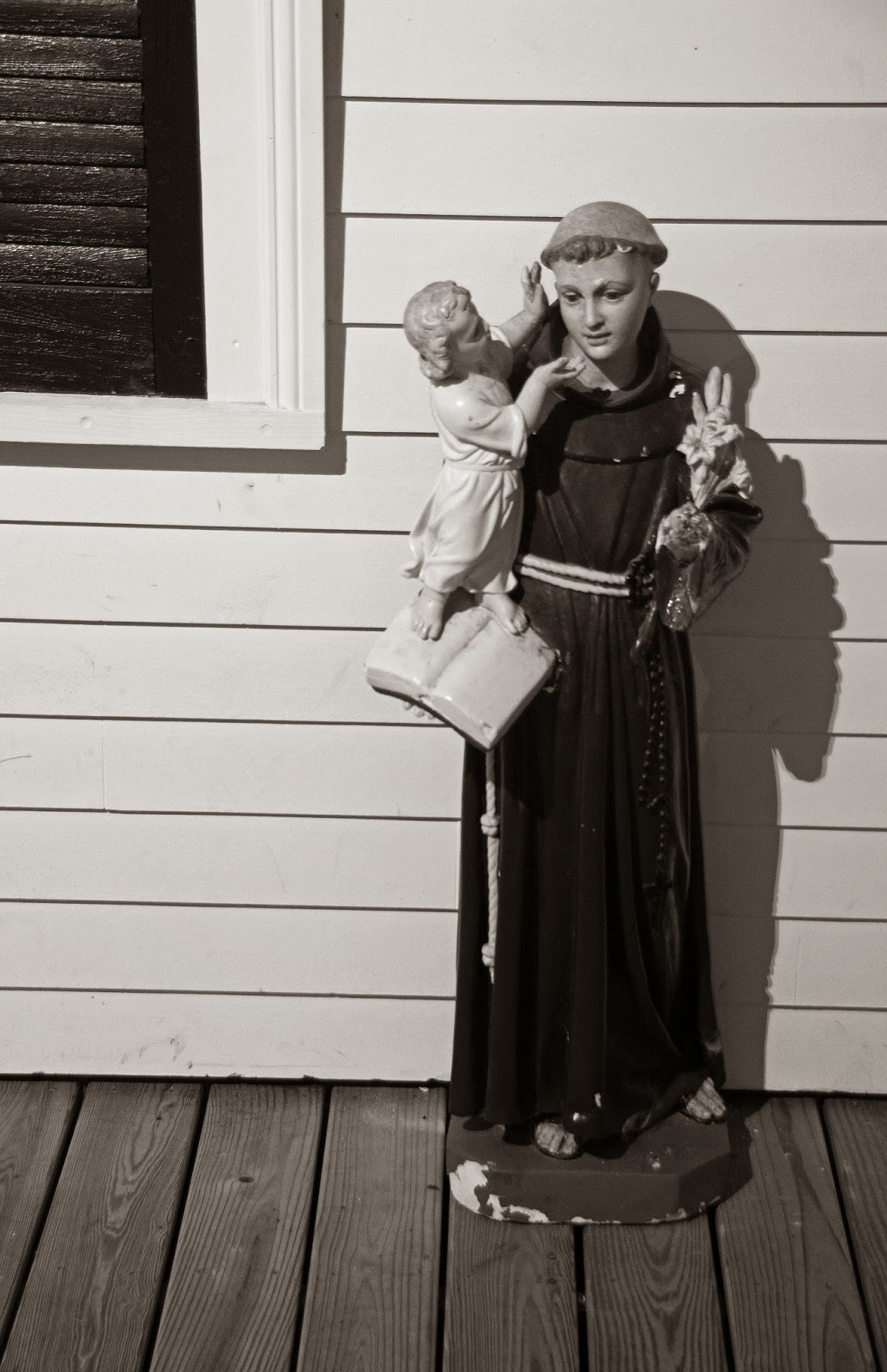 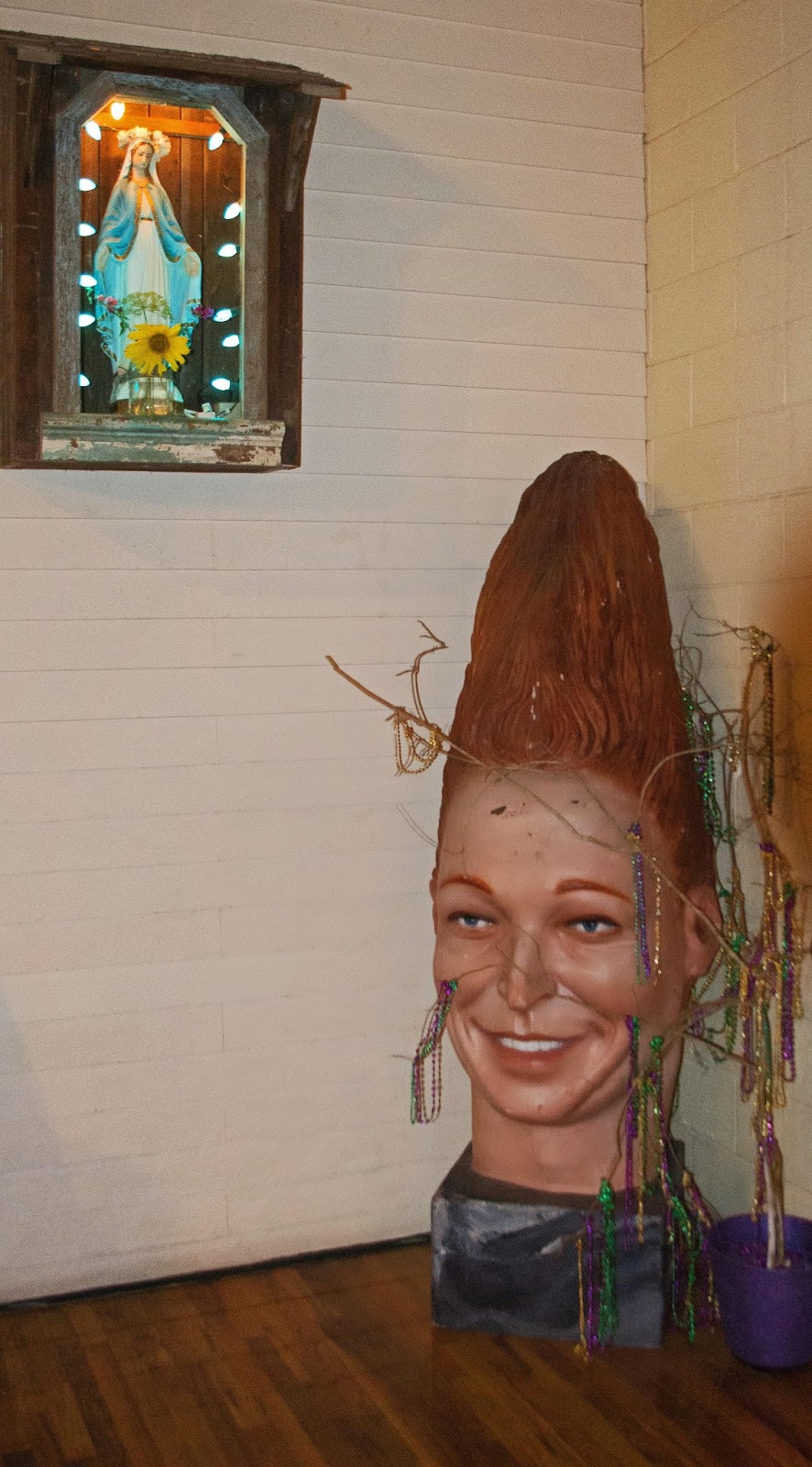 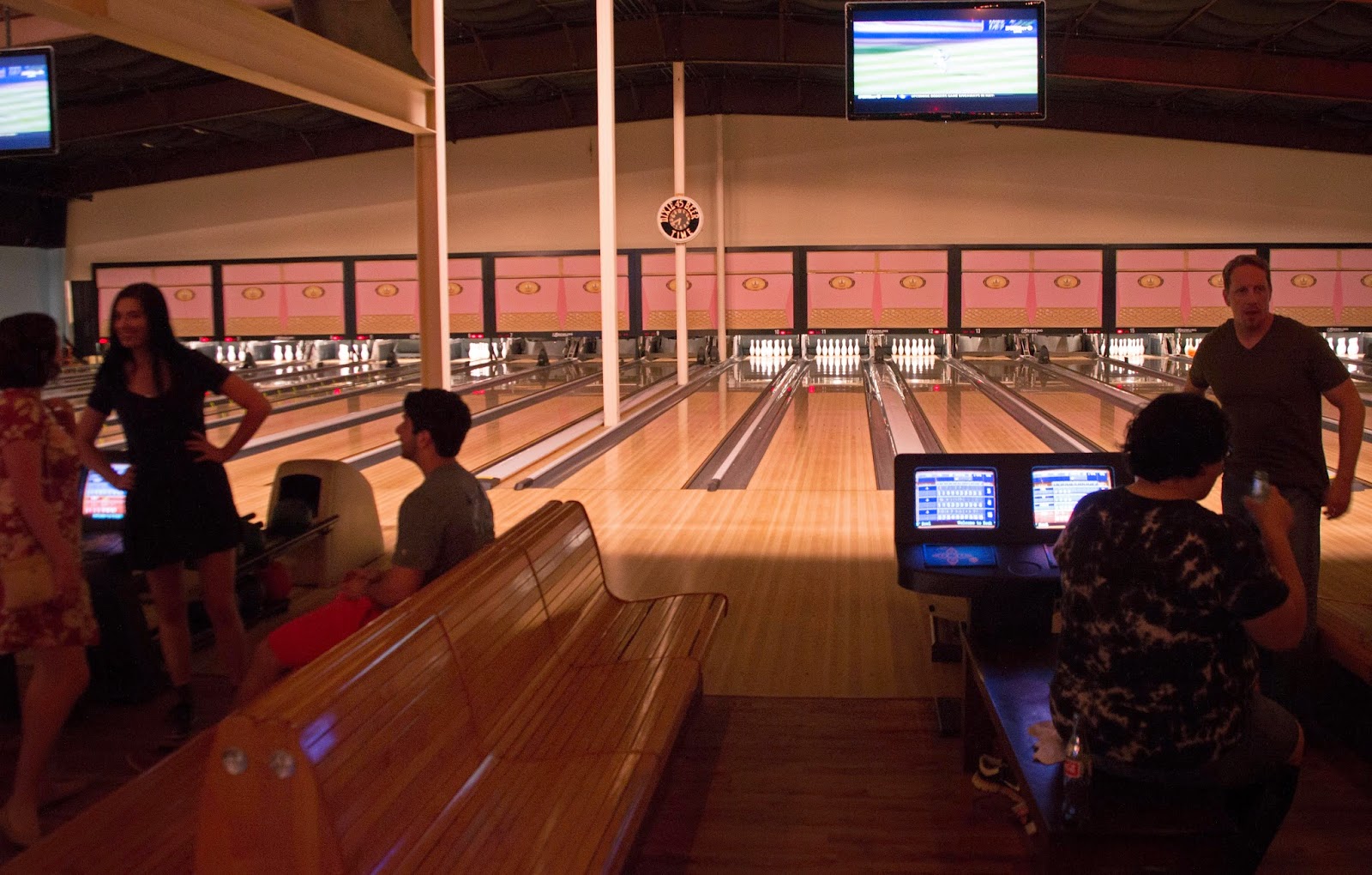 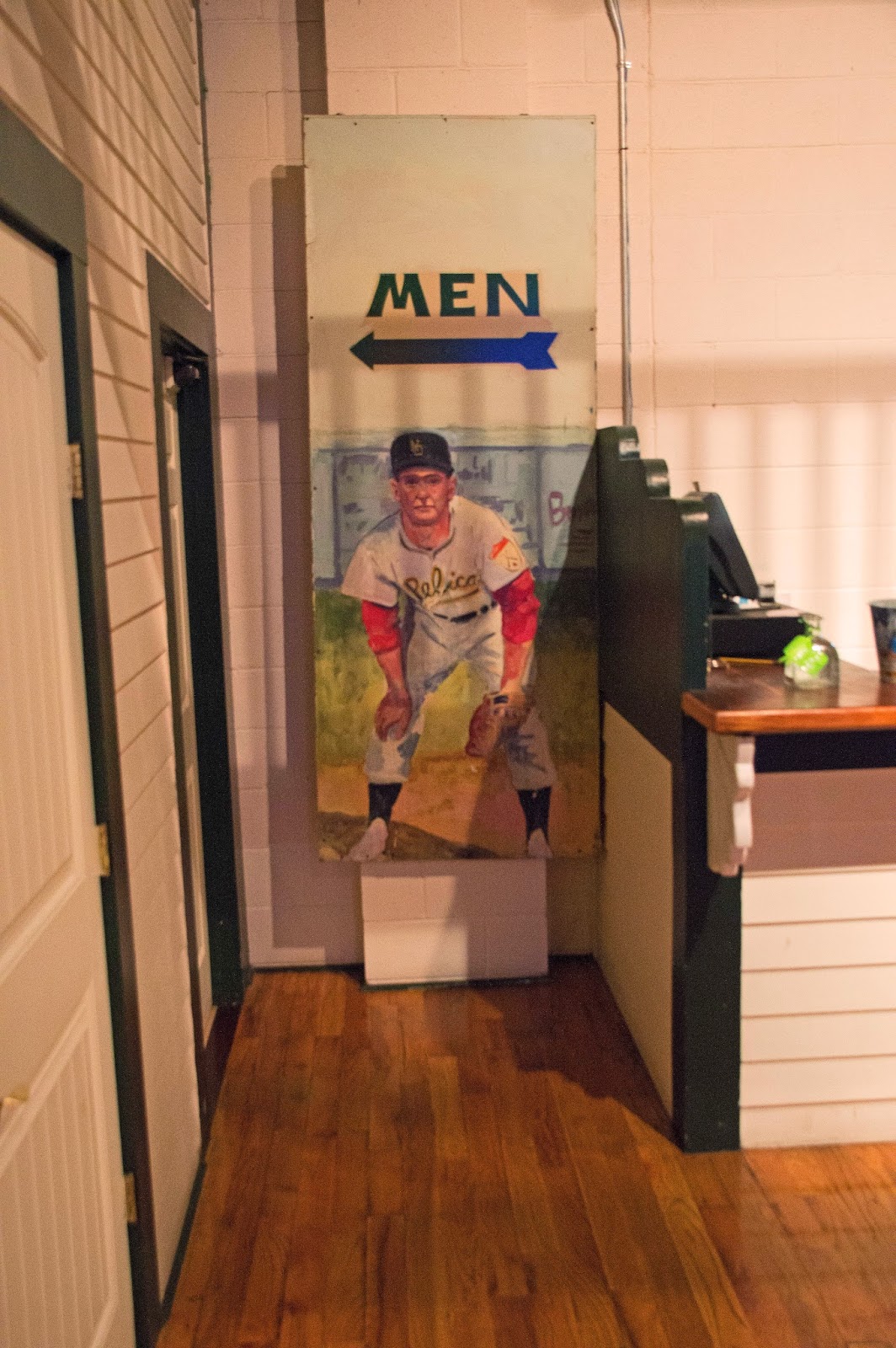 To my great surprise, on stage was a band I knew.  Three years ago during this same kind of workshop, we had cabbed to a place called Tipitina's to see them and now here they were again.  The music was so good we were able to stay for two sets. 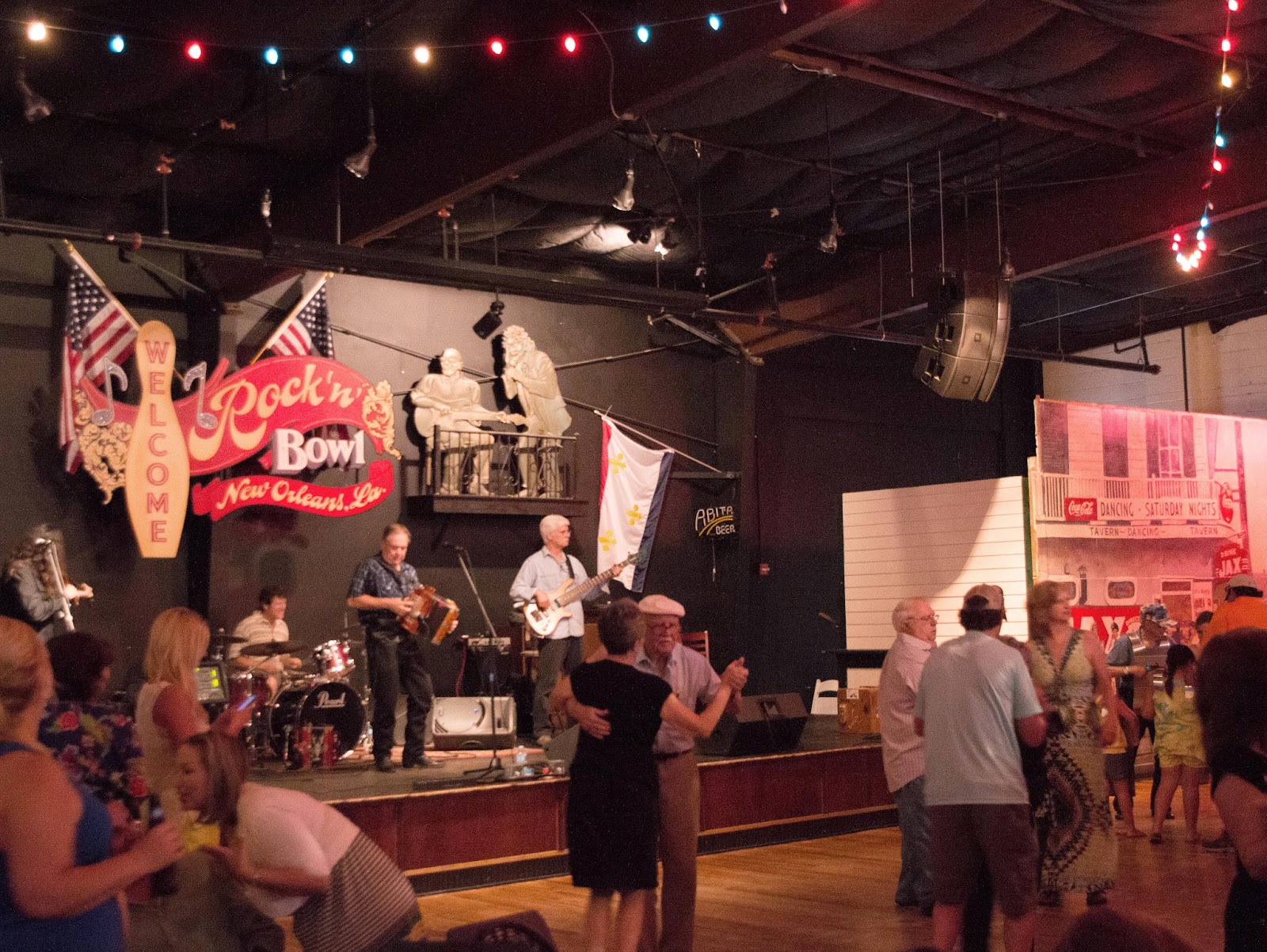 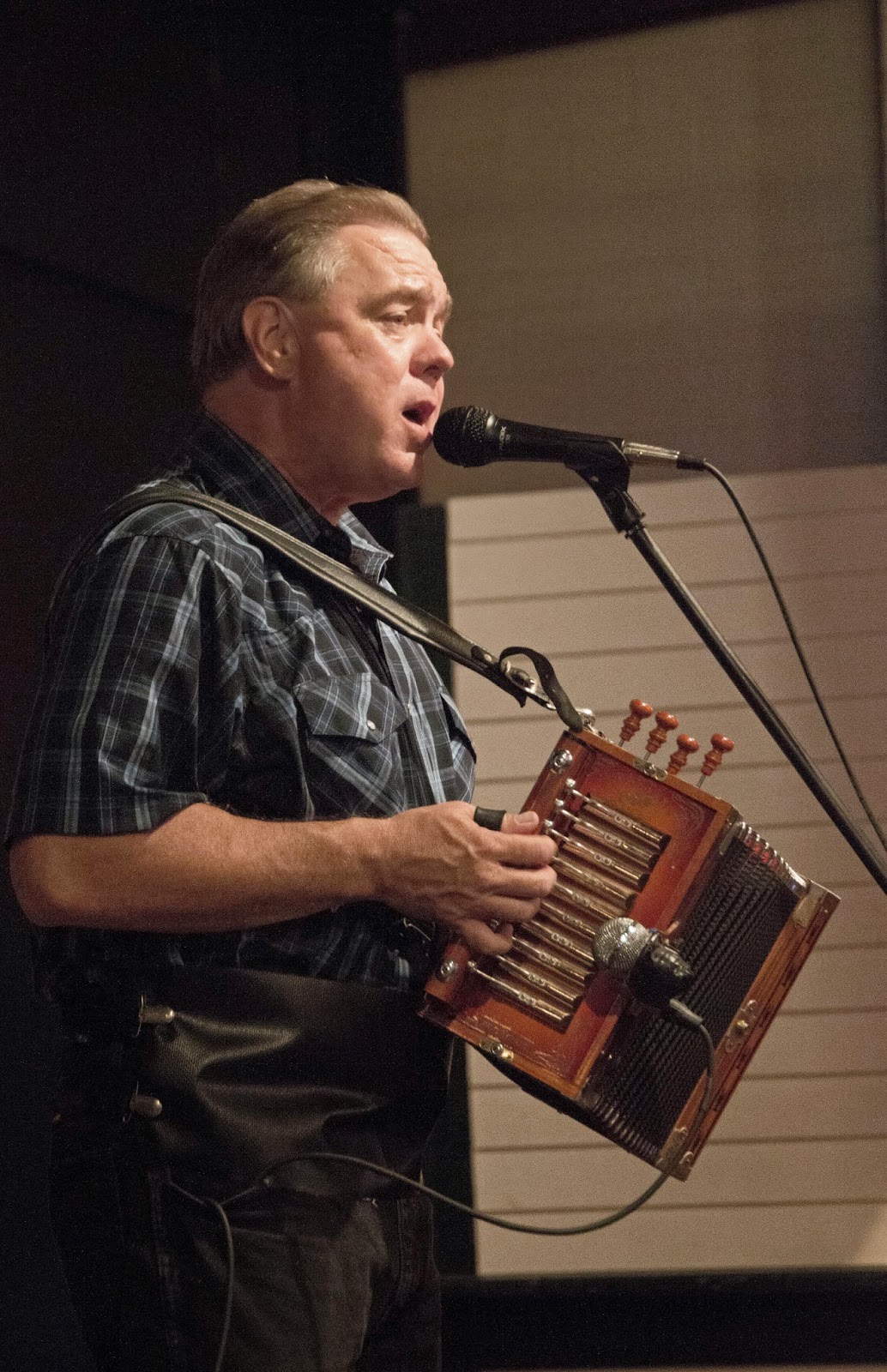 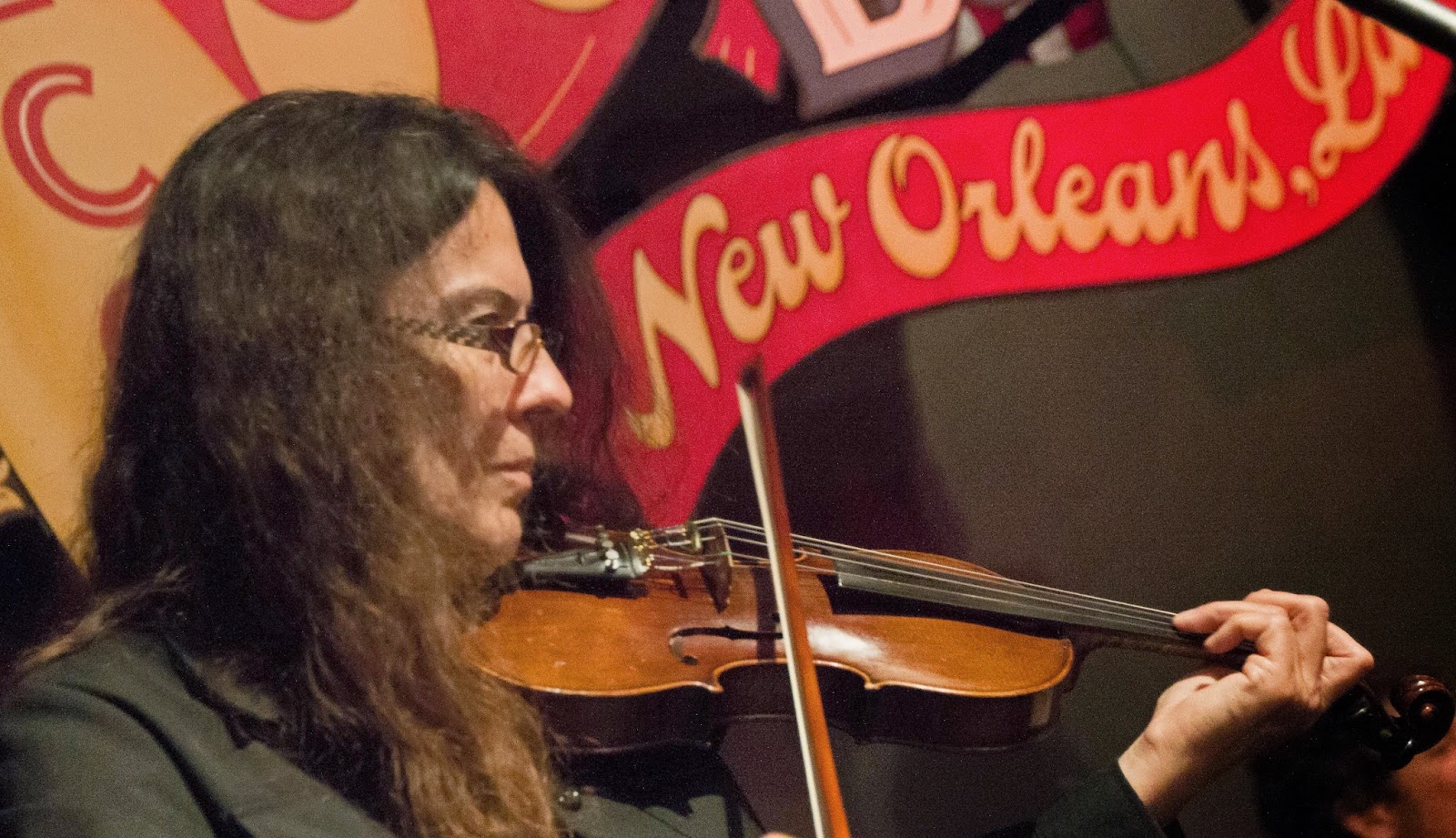 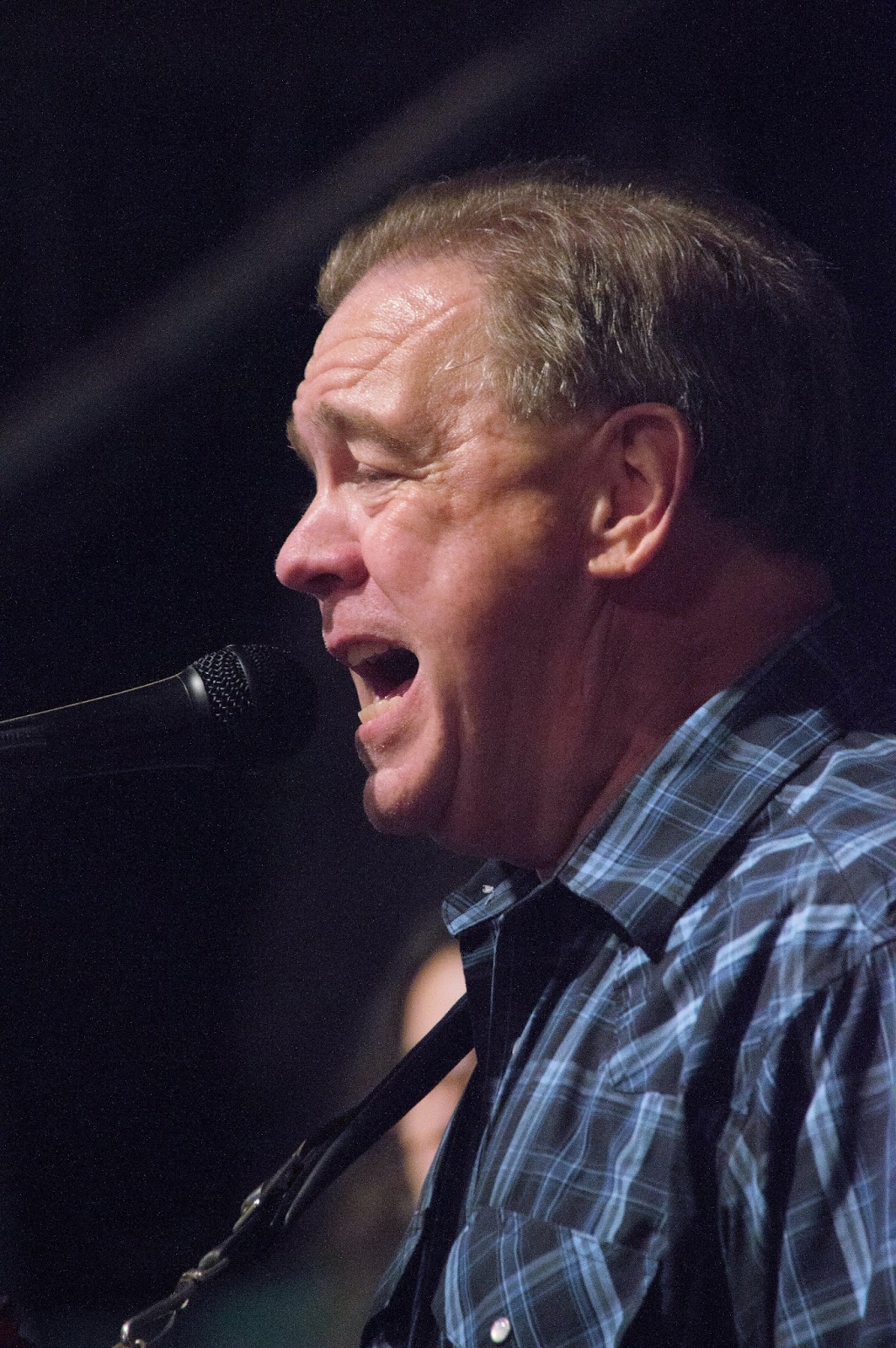 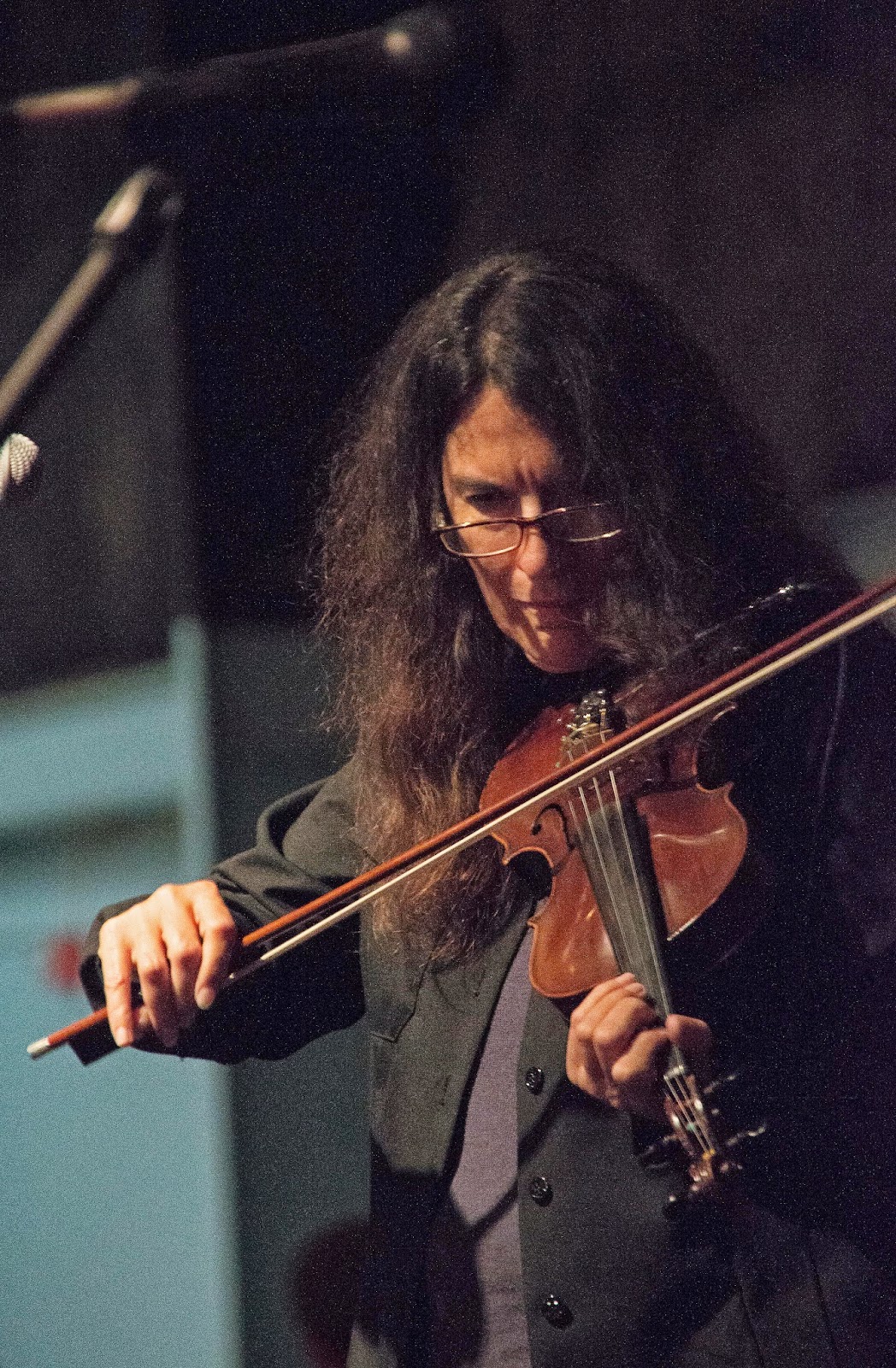 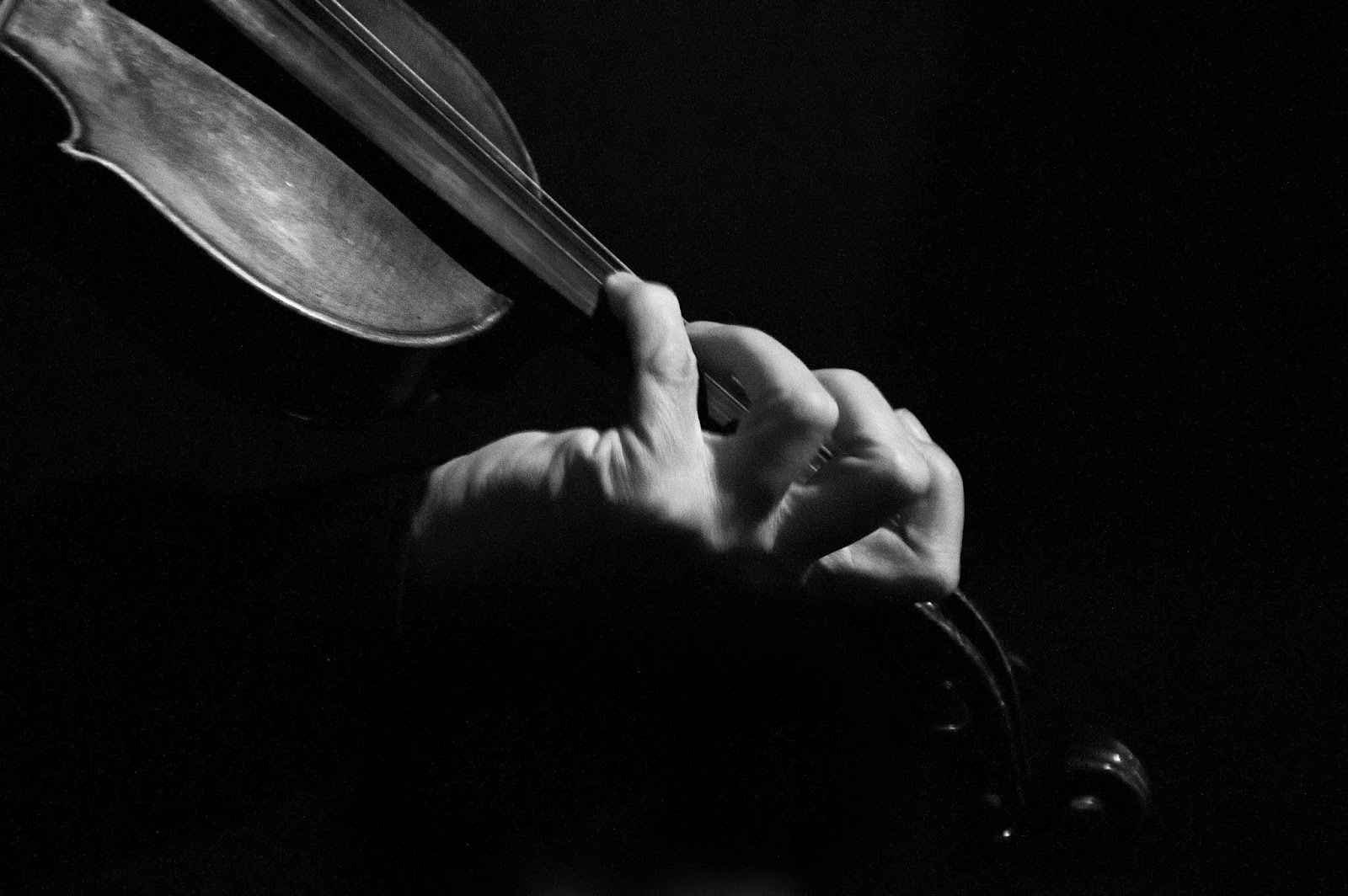 Most of the lyrics are in French.  The magnificent and well coordinated dancing is amazing to see. 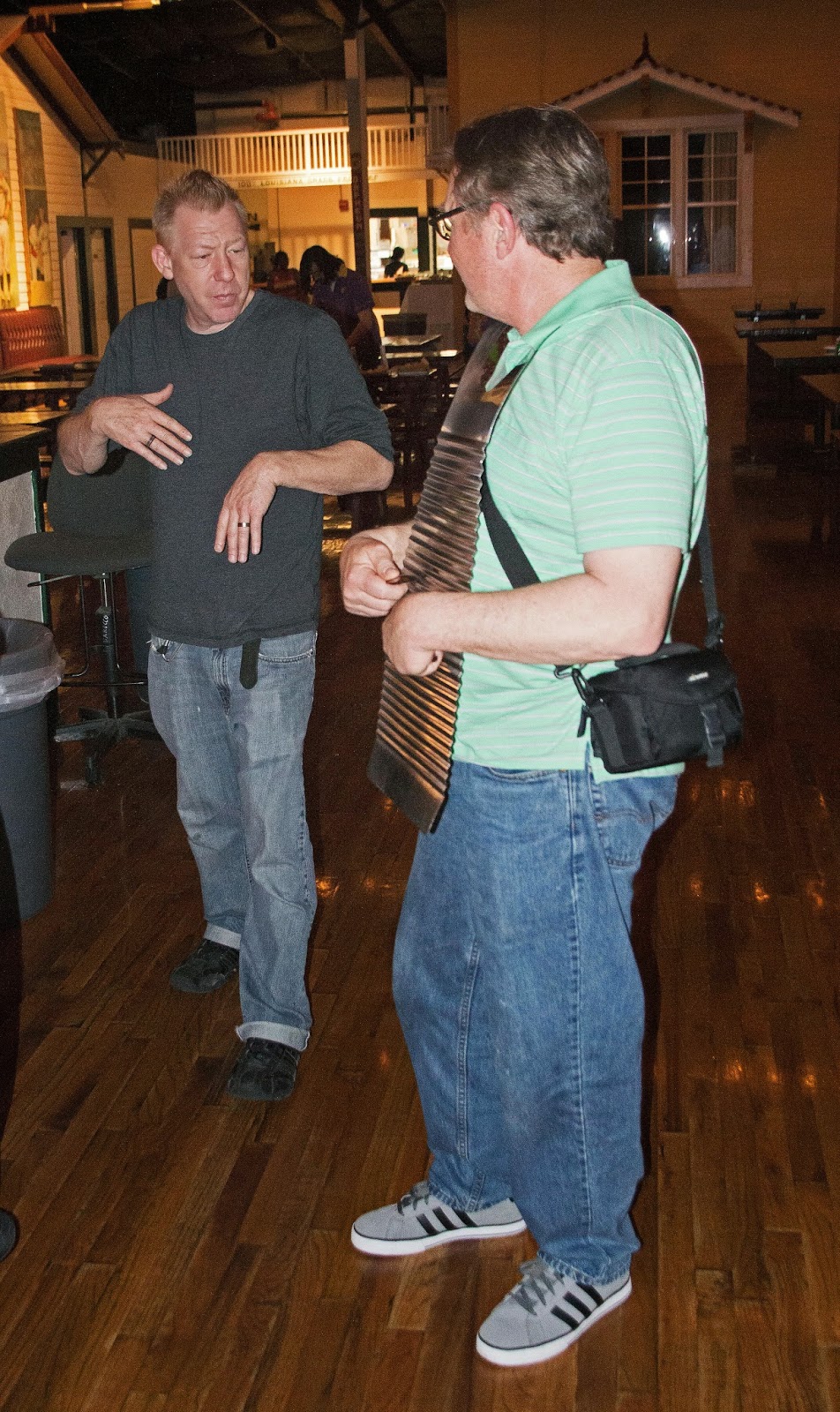 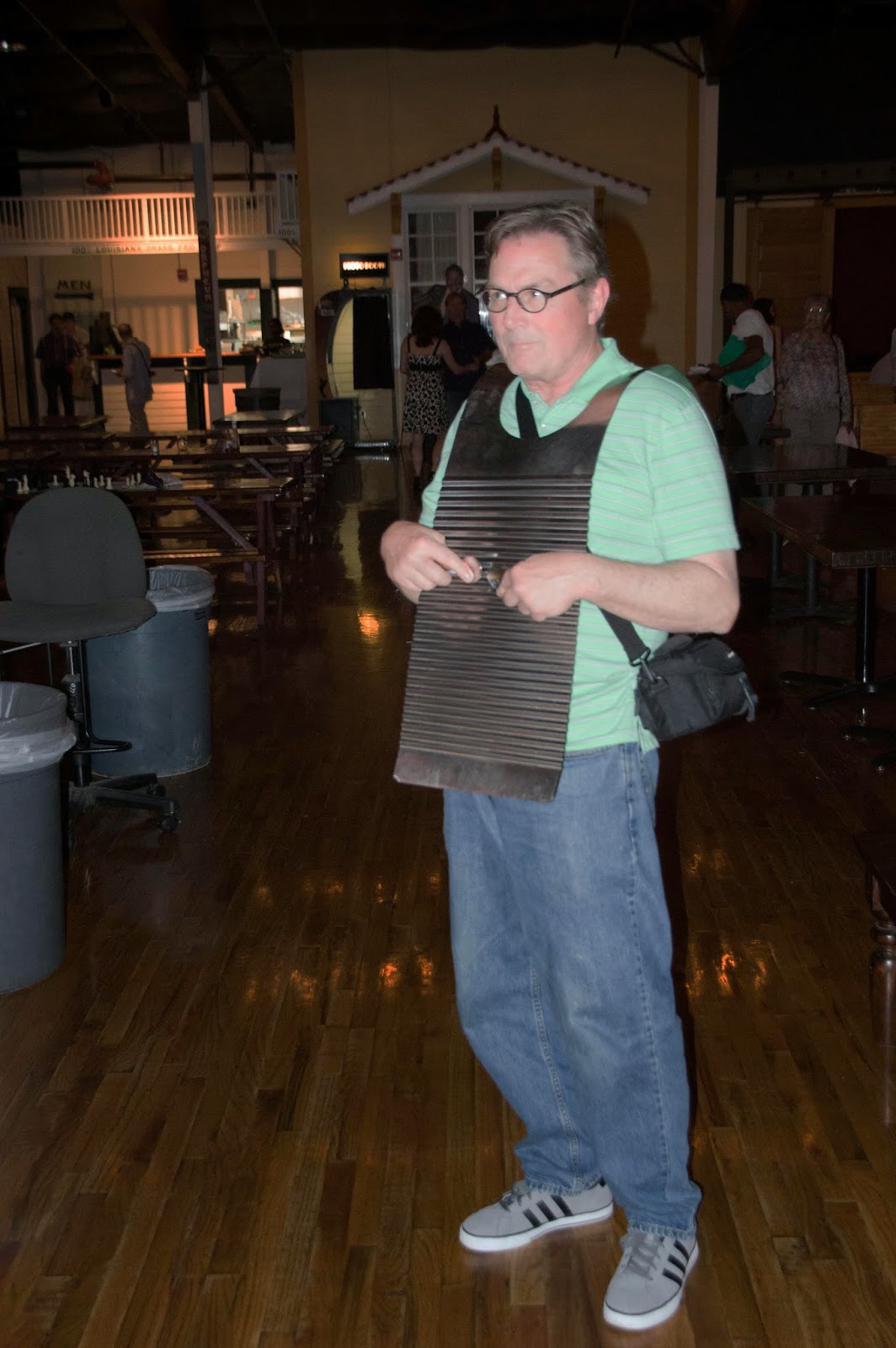 Bill Weber got a lesson on the washboard and then concentrated on his part.

Getting away from Rock 'n' Bowl proved to be a bit more challenging.  Katherine called for a cab which came and we got it.  But it turned out to be a cab for another party at the Rock 'n' Bowl so we got out.  Then another cab came and we got in despite the fact that the little old lady driver had a massive amount of crap in the front seat.  As she pulled away she kept saying she was not supposed to pick up in New Orleans.  Katherine finally asked her flat out, "But you drive in New Orleans so what's the deal?"  It turns out she was at the Rock 'n' Bowl to pick up another group and she could only do that in a suburb of NOLA.  Go figure.  She she did a U-turn and we went back to the Rock 'n' Bowl again. (Personally I was relieved to get out of here cab as I believe she was a real Witch.  Really).

Finally a third cab showed up to drop someone off so we thought it was a good idea to grab that cab.  But the driver was having a fight with the woman who was paying the bill.  We got in anyway and as he drove off he referred to the woman as "suspicious" and "disrespectful."  He was a Pakistani who had been living in NOLA for 15 years but despite our best efforts to be un-suspicious and very respectful we could not cheer him up.

Three cabs later we are finally at our restaurant of choice for dinner: Coop's.  Not sure I quite get Coop's but there is always a line to get in and have bad service followed by good food.  While Katherine was inside doing her private lady stuff, Bill and I were outside standing next to a woman who had a Hand Grenade in her hands and was a little toasted.  She announced to us that it was about time she had something to eat which led to a conversation wherein she revealed she was in town for the International Reading Association convention.  Her name was Cindy Sellers Roach and she works for Heifer International as their Community Engagement Manager.  When Katherine came back out of the restaurant she was excited to meet someone from a company she believes and invests in.  When it was Cindy's turn to get a table she was passed over for our threesome.  When we sat down in the restaurant Katherine bemoaned the fact that she would have like to talk more to Cindy about Heifer so I went back outside and asked her if she wanted to eat with us.

The poor woman hardly got a chance to eat her food as we plied her with questions about her company.  She represented her company well and it was a most entertaining dinner.  Bill paid for dinner and if you keeping score, it is now Bill 2, Gary 0.

After dinner I thought it might be time to let Katherine and Bill have some time to decompress from having to be with me all day so they headed off to have a drink.  I decided to walk Bourbon Street.  The feeling that you can do anything you want was in the air.  Either I am getting old or the street is getting even more free spirited than I remembered from my other visits.

When I got back to the hotel I found Katherine and Bill plus a few other attendees in the hotel lobby such as Tina Berrier, Stacey Stewart, Lois Inman Engel and Kathy Gould.  We all were waiting for Kristy Duncan (KD), Michael and Andrea to show up which they did around 11:30 p.m.

At 1:00 a.m. a decision was made to walk to the Clover Diner for dinner where I not only ate half of Katherine's burger but paid the bill.  The irony of this part of the story is that Bill Weber did not join us so that he is still up 2 checks to my nothing.  But, it is going to be a long week. (Upon further review, it turns out I never even bought Bill a drink the whole damn week.  I owe that guy big time).

Below is Andrea Matus deMeng, Michael deMeng, me and Kristy Duncan at the Clover Grill.  (Photo be Katherine Engen--I swear Michael is not drinking out of the soda I am holding). 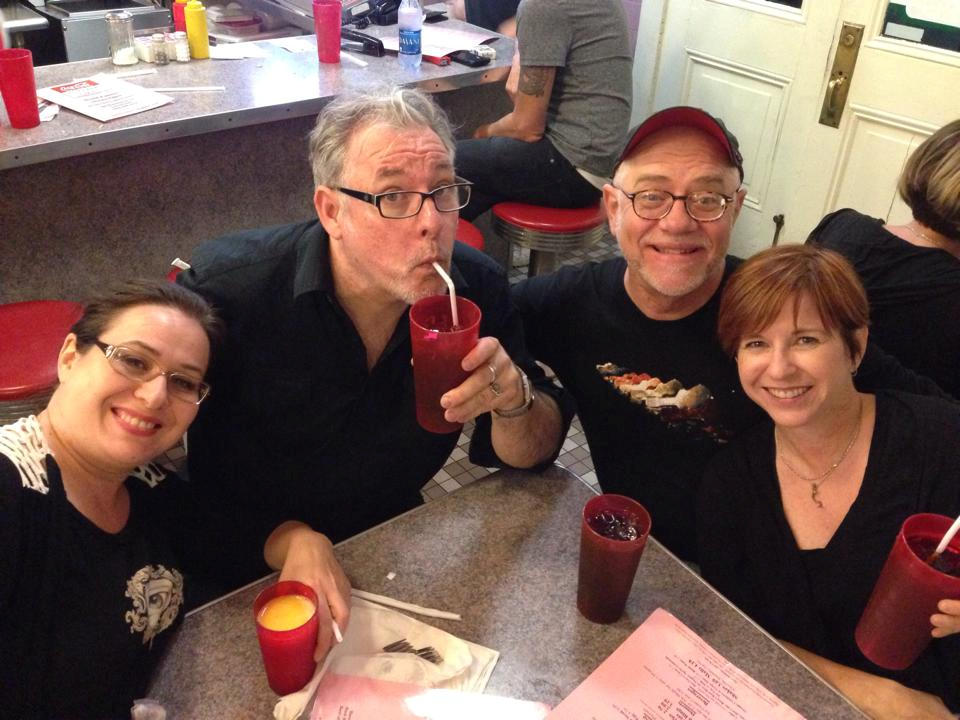