At some point in my life I started a project with this clock body. 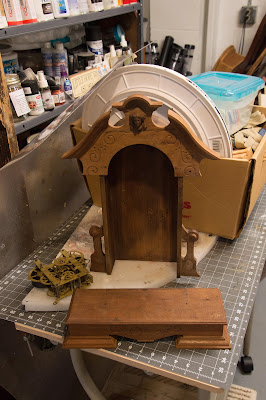 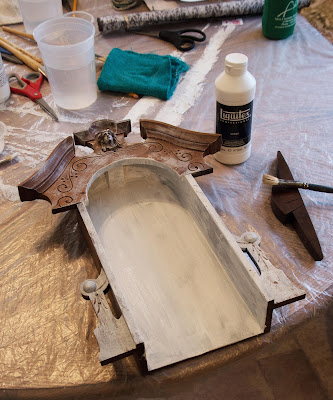 I no longer remember what I had in mind when I started the project.
When the Covid-19 crisis hit and I was quarantined, one of the things that happened was that I started going through piles of stuff in my basement to complete projects just like this. I have been squirreling away special stuff to create a series of what I am going to call Dybbuks.
From Wikipedia: "In Jewish mythology, a dybbuk (Yiddish: דיבוק‎, from the Hebrew verb דָּבַק dāḇaq meaning "adhere" or "cling") is a malicious possessing spirit believed to be the dislocated soul of a dead person. It supposedly leaves the host body once it has accomplished its goal, sometimes after being helped."
At this point in the project, I have no idea what this dybbuk is up to but the project will go forward. The basis substrate of this dybbuk is a resin wrestler doll. I collect all of these I can find that fit my definition of what physically a new god or spirit would look like. Here is the one I selected for this project: 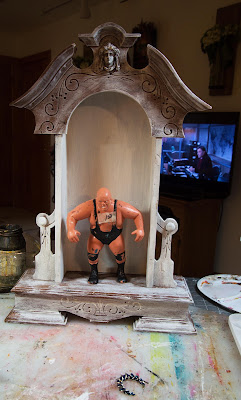 One of the stash boxes I have in my basement is a collection of cool stuff to construct these figures. I got that box out and started to audition the potential spirit making bits. 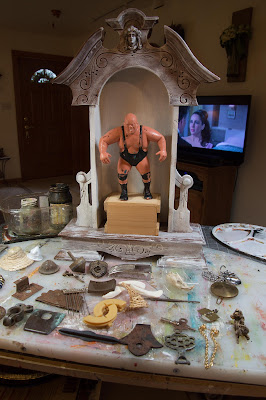 To prep the resin wrestler for what I want to do, I paper mache the body, chop off his head and replace it with a small skull from my collection. 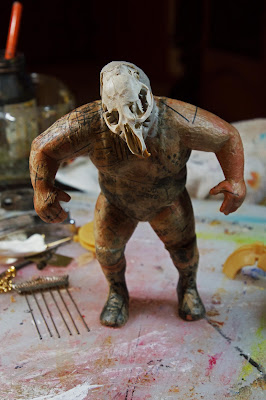 The raised box platform needs something so I decided to paper mache that as well, this time with a decorative paper from my stash. 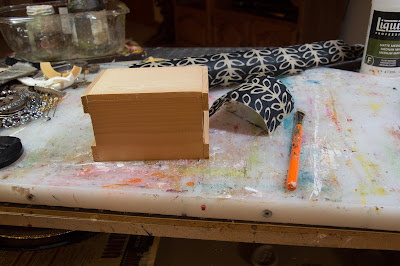 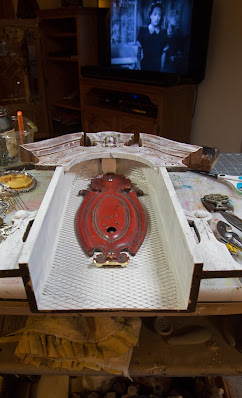 For the inside of the clock body, I found this cool metal lamp part which although it is heavy is going to look pretty nice.
I think it is always a good idea when working on a project to keep putting the parts together every once in a awhile to make sure stuff fits. For instance, I discovered that despite my measuring, the bottom of the lamp part is preventing the box from sliding into place. It require me to Dremel off some of the lamp plate before I assembled it. 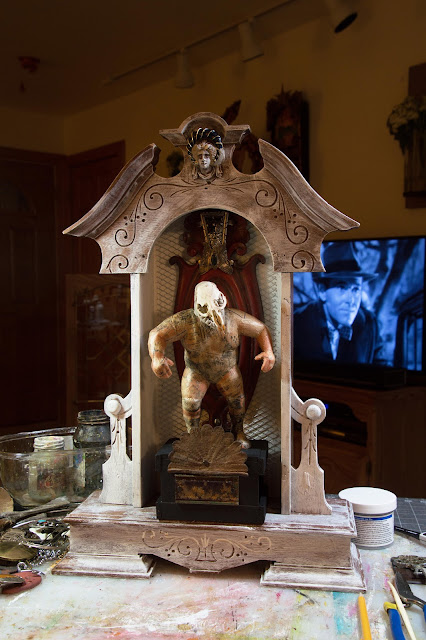 This figure proved to be the most fun I have had in awhile. I used it to again work on one of my weaknesses: layering. I spent two days painting, adding bits, painting, add detail, etc. Below you can see the final results. 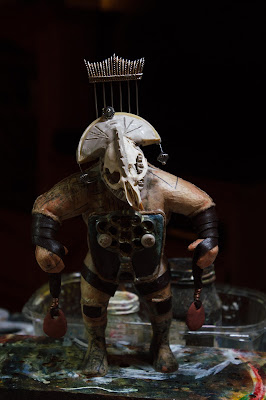 When I added the plastic piece that made the "crown" on this figure, a light bulb went off in my head. Where have I seen something similar? Then it occurred to me and I verified it in a photo file I have in my computer: ancient Japanese armor. 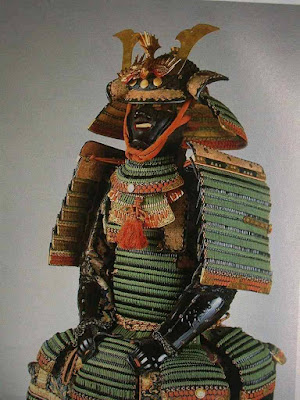 This is about the time I decided what my theme was going to be. With our national tragedy and embarrassment a daily reminder of the strange times we live in, I decided that this dybbuk is a spirit that plays with truth. He makes false things seem true and true things seem unreasonable. Normally I select a title at the end of a project but here I decided it would be The Truth of Disguise and the Mask of Belief Were Joined Forever which from the poem Poem After the Seven Last Words by Mark Strand. 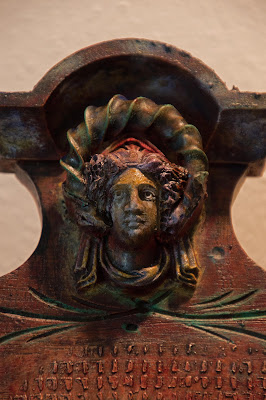 I a box of old text that I have I discovered the following text to attach to the platform, text that remarkably mirrors my theme. 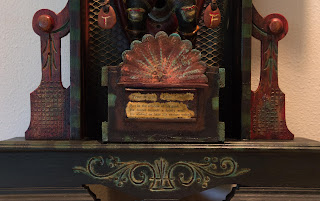 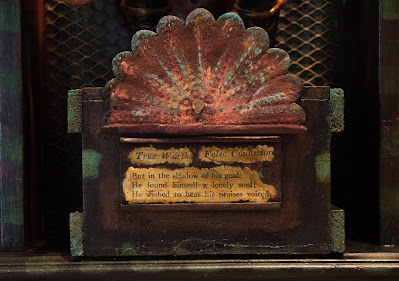 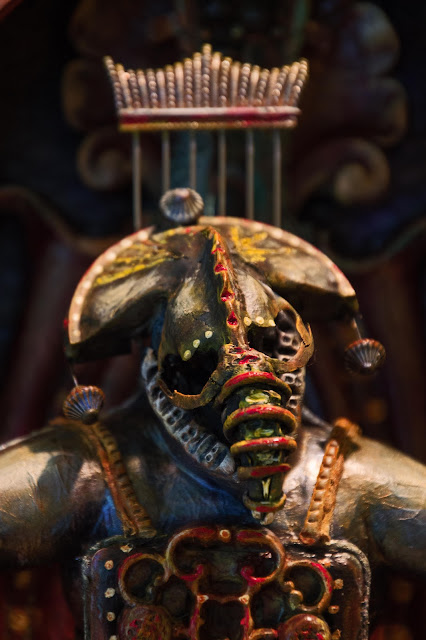 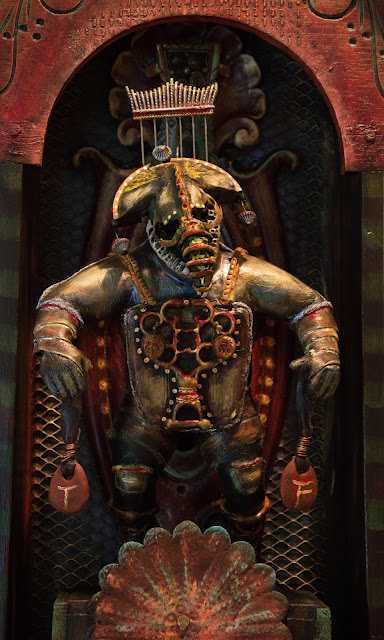 Thus we have The Truth of Disguise and the Mask of Belief Were Joined Forever. 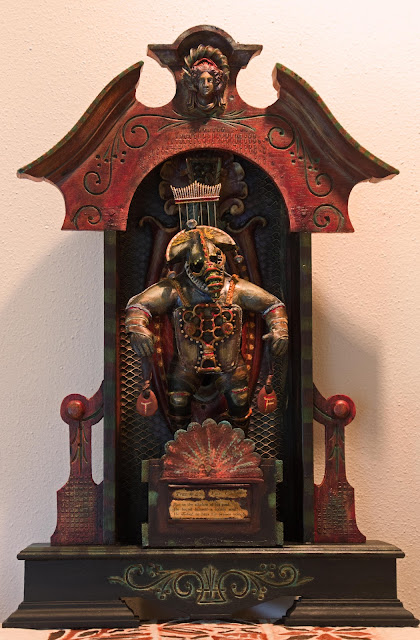 Posted by gary warren niebuhr at 10:04 AM