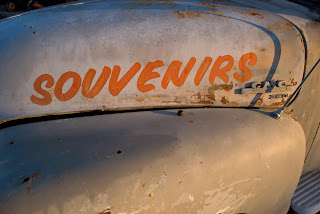 Day four, which is Sunday, June 26, we finally began our Route 66 journey.  Today we were up early, fed at McDonald's (yeah--I know) and on the road to Santa Monica.
Santa Monica, California, is for most people the end of Route 66.  Denice and I decided that it would be much easier for us to bomb out to California and drive slowly back home. This should mean traffic moving in our direction (east) is going to be non-existent and we will be talking to people heading west. 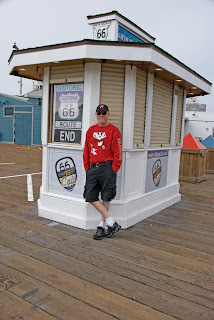 The Santa Monica Pier was our first stop today.  When we arrived at the Pier, the oceanfront was foggy and cool.  It was also deserted, so parking was no issue.  We walked the pier on this Sunday morning prior to all the vendors being open but there were plenty of fishermen.  Denice is still regretting that we did not clamber down a staircase to pet an octopus before one fisherman tossed him back into the sea. 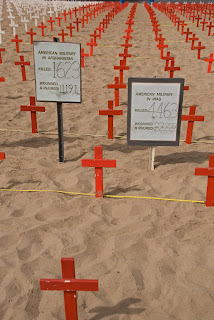 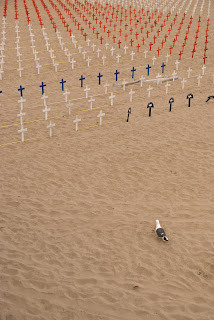 On the beach, a veteran's group had set up crosses to represent all the dead soldiers in Afghanistan and Iraq.
For breakfast, it was family time.  We had a rendezvous at the Back to the Beach Café with our family members Chris, Chuck, Becky, Billy, Jennifer, Jake and Max.  We had a couple of hours of table talk and walking the beach before we left our California clan and turned east. 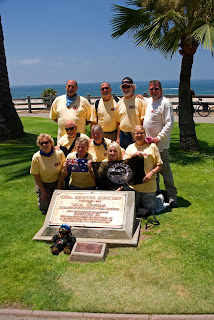 We officially began our Route 66 trip at the Will Rogers Plaque in the Palisades Park which is the unofficial end of the Route.  There we shared the plaque with a large group of English and Australian tourists who had started their journey in Chicago. 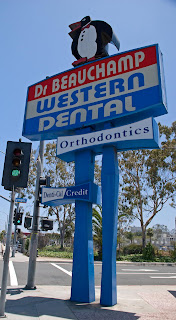 Historically Route 66 really ended at Olympic Blvd. and Lincoln Blvd. so we drove over there.  Signalling the official start of the weird, we also found at that location a penguin dentist.
Kumar, the desk clerk at the Wigwam, did warn us that no one believes how long it will take to drive from the beach to the teepees.  He was right.  We started out at noon and arrived in the teepees at nine that night.

Of course, we did stop along the way.  This is all city street driving and proved to have a ton of things to look at. 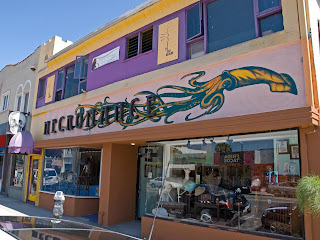 Leaving Santa Monica and moving into Los Angeles, we had to make one side trip shopping stop for me.  We visited Necromance on Melrose Avenue.  This is a multi building affair that sells the weird and wonderful.  In the first store, where a Goth like clerk claimed they sold the overstock (although I saw nothing on sale--not a complaint just an observation) I bought some plastic hearts, fake eye balls, and skull beads.  Then we moved next door to the store that carries the more scientific items where I bought some muskrat skulls, fish bones and some colorful dead beetles.

Down the road, we entered Pasadena where the previous night at the Rose Bowl Mexico defeated the USA in World Cup soccer.  Now we discovered why all the people were yelling in the Mexican restaurant last night in Rialto. 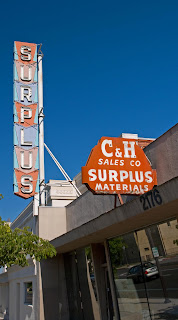 Continuing east on Colorado Blvd., famous for the Rose Bowl parade, we entered Arcadia and drove past the Santa Anita Racetrack.  Here is also a Dennys housed in the last of the Van de Kamp’s restaurant chains old Dutch windmills. 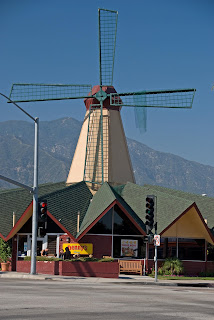 I will admit to making one mistake last night.  I insisted that we stay two nights in the Wigwam rather than risk our $35 a night room at the Aztec Hotel on West Foothill under the assumption that a room that costs that much is either renting by the hour or an opium den.  As we drove past it, it appears to be a great place to stay and both of us were disappointed we did not try it for one night.


Then we were through Duarte, Azusa, and Glendora.  Our dinner stop was the upscale Golden Spur that dates back 80 years.  All I can say is that we spent a lot of money on an average meal and wish we would have eaten some place else because I was the old dude in the whole place in a T-shirt.  Plus mine had a giant badger on it making me a walking billboard for Wisconsin.

After dinner, the sun was setting and the neon started to appear.  Our journey took us into San Dimas, La Verne and Pomona. 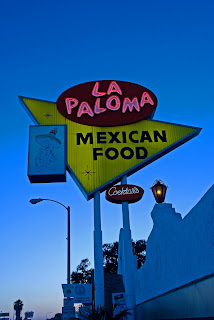 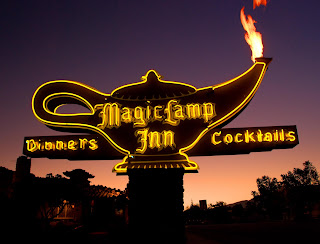 Next was Clarement, Upland and Rancho Cucamonga. The last two cities were Fontana and Rialto before we arrived back at the teepees at about 9:00 p.m.

See all the photos from this trip at http://www.flickr.com/photos/gniebuhr/
Posted by gary warren niebuhr at 8:24 PM