This day was Sunday, July 3rd, and Denice and I worshipped in our own way on The Mother Road.  Denice knelled in front of a wash machine for awhile and then we grabbed breakfast in the hotel and were on the road by 9:30 a.m.

Our initial goal was a special museum but we had not gone more than a few miles down the road and up popped the Cedar Crest Flea Market.  I managed to score an electric guitar body, clarinet and three tools for $28.

The road to the museum was closed due to forest fire danger from the same one that is burning at Los Alamos as were are in the state.  The good news was the blockade was right at the entrance to Tinkertown Museum (http://tinkertown.com/).  Tinkertown was the hobby of a man named Ross Ward who began to build a play land out of cement and bottles. 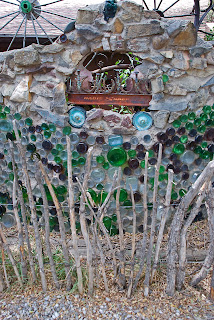 He kept adding things, making things and whittling things from wood, and buying old stuff to add to the mix.  His inspiration was The House on the Rock in Wisconsin.  He eventually built dioramas that traveled around the country as exhibits but ended up here at this own museum. 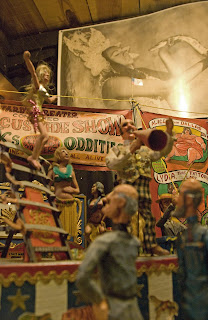 In February of 1998, at age 57, Ross was diagnosed with Alzheimer’s Disease and passed away November 13, 2002. Even while suffered through this horrible disease, he worked on an art car that is now parked in a garage on the land.  The museum is a hoot to visit and well worth getting off Route 66 to see.  Plus, there was a personal message for me: 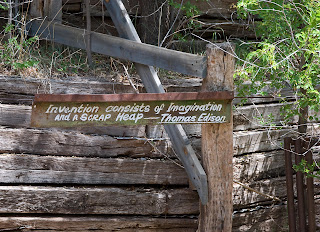 On the way back to Albuquerque to get back on The Mother Road, we made a stop at the Tijeras Art Fair where we viewed the art and listened to the music.

In the city, we ran down Central Blvd., and found a big Paul Bunyan statute.  Then it was on to the University of New Mexico and the Frontier Restaurant for lunch. 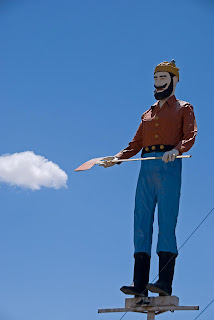 Albuquerque is rich in signs but unfortunately we were not able to get out at night and see the neon.  However, they are still pretty cool. Now we turned north on The Mother Road towards Santa Fe.  In Berralillo, we stopped at an antique store that was having a 25% sale.  I starred at a doctor's bag that would have cost me $41 after the discount so I eventually passed but I did walk out of the store with a zillion really cool milagros that are designed to be strung on necklaces.  Total cost was $11.

Our choice for a hotel was the Inn at Santa Fe at the outer edge of town.  We then drove downtown for a walkabout.  Our dinner choice was the Tabla de los Santos at The Lodge Hotel for an elegant meal outside (some thing we don't get to do to much in Milwaukee).

View all the photos from this trip at http://www.flickr.com/photos/gniebuhr/
Posted by gary warren niebuhr at 3:17 PM