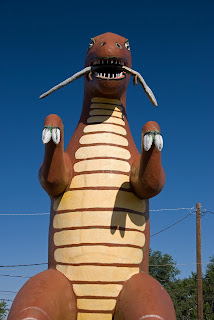 Day 10 of our Route 66 journey was Saturday, July 2nd, and we woke in Holbrook, Arizona.  After a hearty breakfast of hotel lobby food (I cannot imagine what this is doing to my cholesterol and diabetes), we headed into town to see the dinosaurs at the Rainbow Rock Shop.  According to the guide books, the guy who owns this store put these up to attract customers and is sometimes not to pleased that they attract tourists like me.  However, we got there before he was open and safely took the photo.

We also got to the famed No Tell Motel before everyone was up as well. 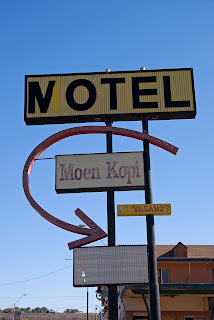 Everywhere we go there are reminders of the current state of the economy in the US and the fact that a lot of Mother Road history is just that. 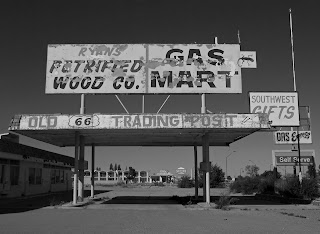 In Sun Valley, we came across The Painted Desert Indian Center which has dinosaurs out front to advertise its wares.  Denice and I both hesitate to go to places that may (or may not) be real Native American stories, but I could not resist the creatures. 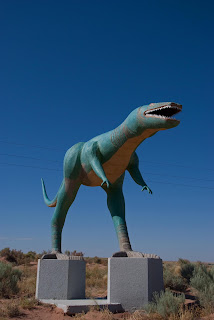 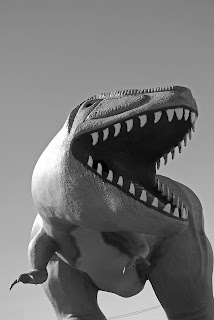 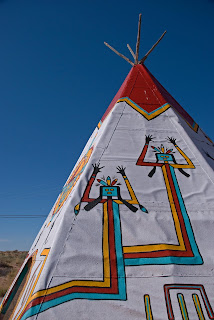 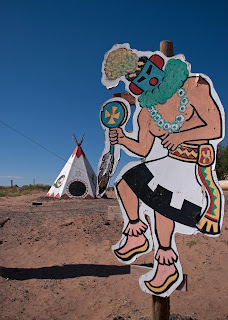 Meanwhile in the air conditioned store, Denice was discovering that the place was legitimate.  She bought a watch and I bought a ring crafted by a woman who is now 96 and no longer able to make jewelry.  My ring was some twisted snakes on the stone and I really like the image.  Everything about this store was high class and I cannot recommend it enough as an experience.

From Navajo we went through Chambers where another ghost car appeared. 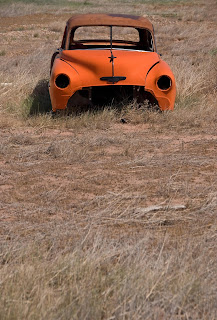 In Sanders we stumbled upon a roadside flea market and a sign indicating it was exactly 100 degrees.  I bought a hand held fish spear while Denice bought an $8 piece of bead jewelry which is stunning. 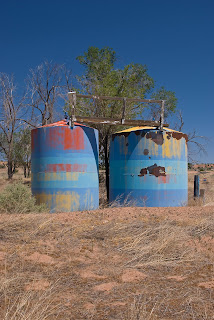 Through Houck (where I kept saying, "What the Houck?") and into Allentown.  Denice was constantly navigating on this trip using the my instructions from various web sites, the EZ guide and our Garman GPS.  Sometimes we would be confronted by things like this with little or no signage to help and we had to make a choice.  No matter which direction we went, we always got back on track if we got lost and we never ran out of amazing discoveries alongside these old highways.  How about a car graveyard in a dry river bed? 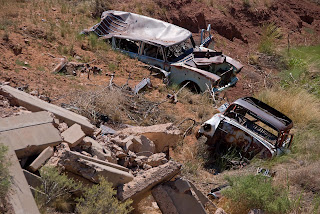 Lupton provided a mountain backdrop for all of its semi-abandoned glory.  At one point we stopped to photograph an old abandoned bus only to have a guy and his dog get out of it.  We were constantly confronted by scenes of abandonment that proved to be someone's home. 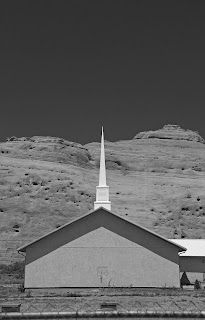 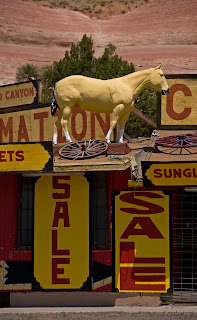 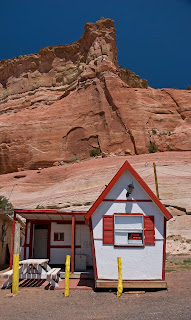 And now for something completely different:  my favorite state in the Union, New Mexico. 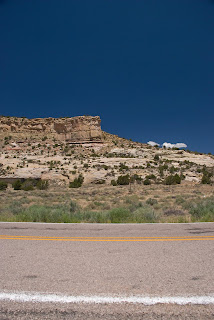 Did you notice something different about the photo above?  Look on the right side of the cliff and you will see something we have not seen for days--a cloud.

This is where we stumbled upon a horse herd who, no matter how many times we said "Here, horsey" or did that kissy sound with our lips, they stayed well away from us.

In Manuelito, we passed a revival tent. 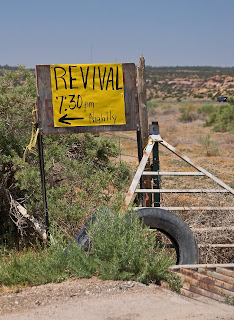 In Gallup we found a sedan on a stick. 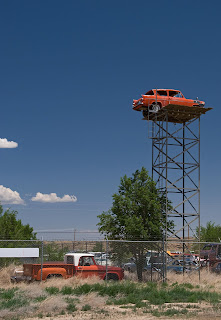 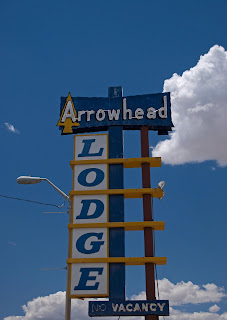 We tried to eat lunch at the famed El Rancho Motel but we were told there was going to be a half-hour wait so we went back to place we had past called Virgie’s for lunch. 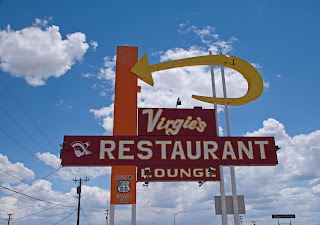 In downtown Gallup we past a permanent flea market store so we had to stop.  I bought an old fashion bicycle knickknack and a vintage nutcracker.  The owner asked me if I knew about the big downtown flea market--and my ears perked up.  We did drive over there and found it to be typical of most of the flea markets--overstock items from failed businesses.  But I did manage to find two different dealers of skulls!! Score one horse and two white tail deer skulls for a total of $30.

Miles past as we went through Zuni, McCune, Iyanbito, Coolidge, Continental  Divide, Thoreau, Prewitt and into Bluewater.  Somewhere on this portion we passed the Route 66 Swap Meet which had been advertised as a treasure trove and sure looked like it from outside the fence where we were because it was closed.  Not permanently closed--just closed when we were there.  This was typical of many businesses on The Mother Road and we could not figure out why they didn't want our money.

In Bluewater we discovered the Bluewater Motel remains. 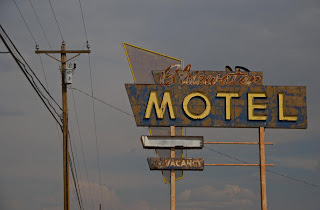 Toltec and Milan went past before we reached Grants which proved to have many signs of interest.  Then it was through San Fidel and into Villa De Cubero were Ernest Hemmingway wrote The Old Man and the Sea.

It was here that I decided to invade some old brick buildings by the side of the road.  I have to say that I am normally pretty cautious about things like making sure the place is really abandoned, checking out the conditions of floors so I don't fall threw and trying to be alert to things like snakes!  However, here I was surprised by a pack of dogs who I would have expected to make their presence known as soon as I got near.  Anyway, a quick retreat saved my ass and after the initial panic I came to believe the dogs might have been more curious than aggressive which might have saved me from getting bit on the ass.  Either way, here are two of the photos: 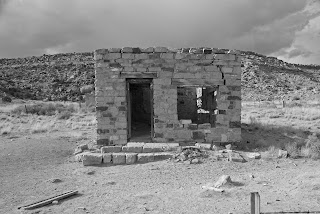 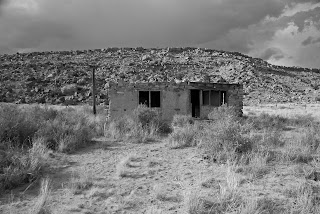 Then it was Budville, Paraje, New Laguna, Laguna (not that we could tell the difference), Mesita, Correo, Suwann, South Garcia, Rio Puerco, Sandia, Los Lunas, Peralta, Bosque Farms, Isleta Pueblo (where all photography is banned), Isleta, Los Pallidas, Pajarito, Armijo and into Albuquerque.  It was pretty late at night for us at that point so we were not choosy about where to stay and just grabbed a Days Inn.

Maybe we should have been a bit more choosy as while we were across the street eating at a local family restaurant we saw the cops pull up to our hotel lobby.  Multiple cops, lots of flashing lights, etc.  Luckily, all were gone when we were done with dinner and we never found out what happened.

To view all the photos from this trip, go to http://www.flickr.com/photos/gniebuhr/
Posted by gary warren niebuhr at 12:53 PM